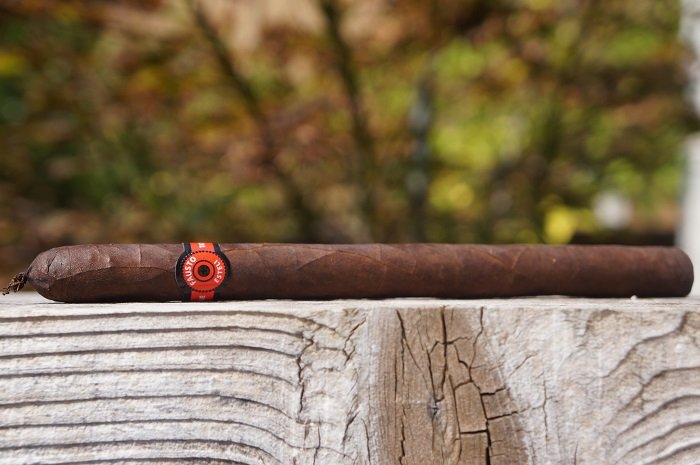 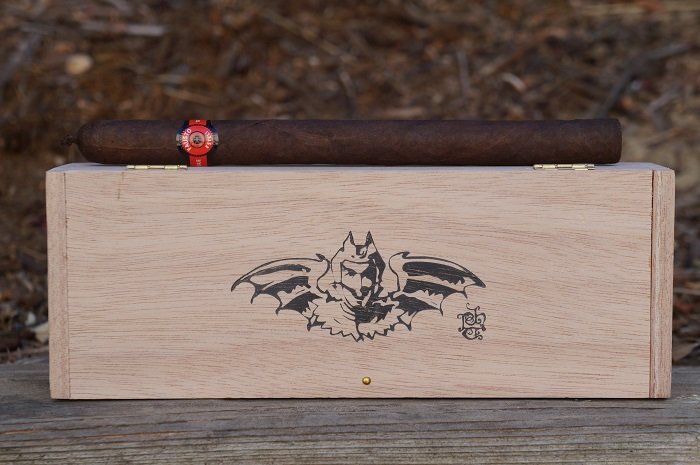 Aaron: The cigar begins with a potent combo of toasted cedar, smokiness and black pepper. At a half inch in, the profile mellows as the toasted cedar is up front with some dark earth and black pepper a bit behind and a light smokiness in the background. The retrohale is musty cedar, dark earth and light black pepper. At an inch and a half, some mustiness joins the profile. As the third comes to a close, the profile is musty and toasted cedar up front with dark earth and black pepper a bit behind. The strength in this third was right at medium.
Seth: The first third opens with earth, soft red pepper and cocoa powder notes. I am getting coffee, leather and wood notes as well, and there is this meaty fruit stew quality. Very balanced. Lovely. Medium to medium-full in strength and body.
John: The first third gets things going with medium-plus strength chocolate, with medium strength baking spices coming through the retrohale, with delayed post draw leather. Pepper joins the post draw as the first third progresses. Some tobacco sweetness develops, and anchors the leather and baking spices together. Cinnamon and bread join by the 30 minute mark. Some time later, mild, dry wood joins the post draw.
Jiunn: The first third has a mixture of cedar, seeded red pepper spice, cocoa and dry soil. The seeded red pepper spice is definitely most noticeable. The retrohale is very spicy, giving that much more depth. The finish shifts towards being dry soil ridden with tapered red pepper spice and cedar. Strength and body is medium-full. 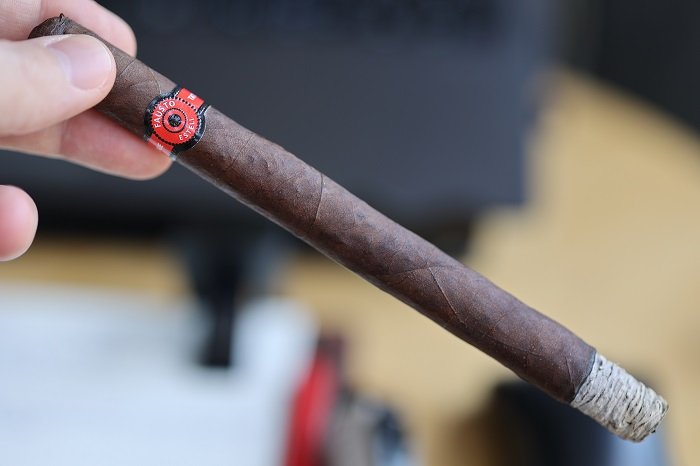 Aaron: As the second third begins, the musty, toasted cedar takes a bigger lead over the dark earth while the black pepper is now fairly light in the background. At an inch and a quarter, the earth has become a bit dry, and is now even with the musty, toasted cedar while there is still a light black pepper in the background. The retrohale is an even mix of the musty, toasted cedar and dry earth. The third wraps up with the even mix of musty, toasted cedar and dry earth with light black pepper in the background. The strength has bumped up to slightly above medium.
Seth: The second third delivers a much stronger flavor profile and there are strong red pepper notes. I am picking up some earth and chocolate as well, and the finish is of tobacco, cherries and leather. Solid medium-full cigar. Close to full.
John: Chocolate and baking spices carry the profile into the second third. There is still dry wood finishing the draw, with leather providing some accents. The pepper from the first third is all but gone by this point. Some mildly sour citrus settles into the middle of the profile, along with earth accents as the cigar progresses.
Jiunn: The second third’s flavor profile tastes more cohesive. The components of cedar, red pepper, cocoa and dry soil blend much better together, showcasing more cocoa and cedar, whereas the first third showcased far more spice. The finish also shows less earthiness, and allows for the spice to shine through a bit more. Strength and body remains medium-full. 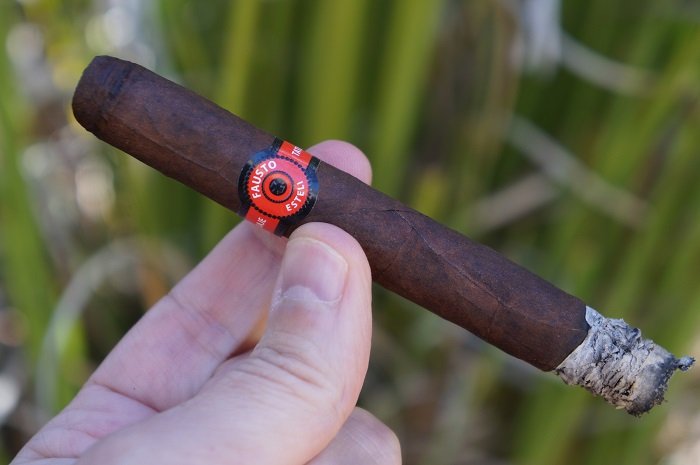 Aaron: The final third continues with the even mix of musty, toasted cedar and dry earth with light black pepper in the background. At a half inch in, a green hay note joins the profile. The retrohale remains an even mix of the musty, toasted cedar and dry earth. At an inch and a quarter, the toast note transitions to a light char while the green hay note has departed. The cigar wraps up with the musty, lightly charred cedar and dry earth with light black pepper in the background. The strength in this third bumped up to medium-full.
Seth: The final third had a strong finish. I was getting those red pepper and earth notes, and they were paired some mocha and leather flavors. There was some wood as well on the finish, and very balanced. I would classify the finish as medium-full.
John: I’m greeted with light-plus strength chocolate, baking spices and wood all on the retrohale. Medium strength earth pushes into the middle of the profile as it settles in. As the last third progresses, some mild citrus mixes in with the earth, but is getting lost by the intensity of the other flavors. Some harsh bitterness comes through the finish at the halfway point.
Jiunn: The final third creates an unwanted char build up. This build up almost single handedly negates the other flavors of cedar, red pepper, cocoa and dry soil. Strength and body finishes the same medium-full. 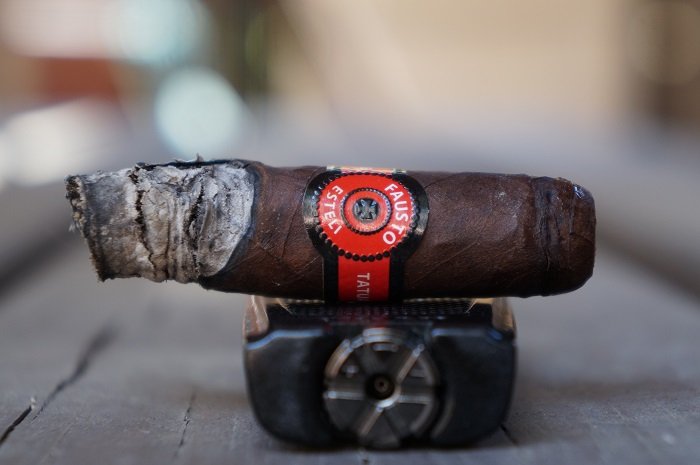 Aaron: The cigar went out on me four times, so I’m not sure if the cigar was still a bit wet, as when it went out each time it was just immediate.
Seth: Amazing burn and construction.
John: The burn is quite straight through the review, with a gray-white ash.
Jiunn: Great burn performance. Even burn, solid ashes, cool burning temperature and ample smoke production. 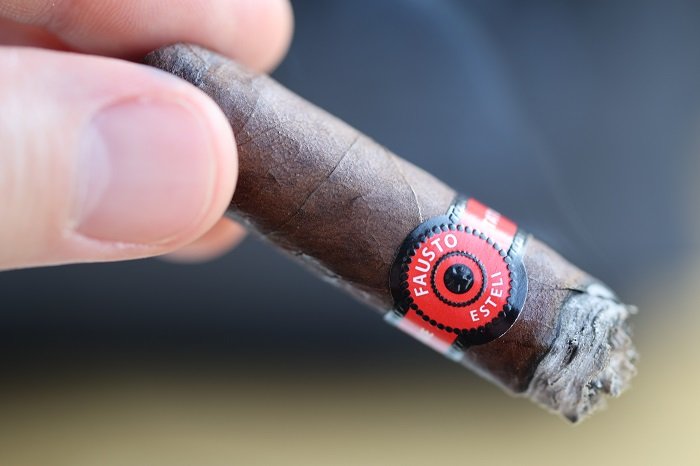 Aaron: The draw was slightly tighter than I prefer, but didn’t cause any issues with the smoking experience.
Seth: Perfect draw throughout.
John: The draw started out average, with roughly 3-1/2 to 4 notches of resistance. Roughly 20 minutes in, the draw opened to 2 to 2-1/2 notches which is a good rating.
Jiunn: The draw was perfect, giving the ideal resistance and air flow.

Aaron: The cigar started pretty well with a nice flavor profile that delivered a lot of body. About an inch into the second third, it seemed to run out of steam as the fullness of flavors fell off a bit. I’ve always enjoyed the Fausto blend and the Tatuaje Fausto The Old Man and the C Lancero delivered through about the first half of the cigar, it just couldn’t maintain itself the entire way. I’d like to revisit this down the line when the cigar has more time on it, but with it only coming in the coffin with the culebra, carrying a high price point, I’m not sure I’ll actually follow through on it.
Seth: Tatuaje Fausto The Old Man and the C Lancero is a solid lancero and my experience when I was done was that this was not as strong as the original Fausto, but more complex overall as a blend. The flavors were superior. There was balance and substance with this cigar. The flavors of earth, spices, stone fruit and cocoa were lovely, and they paired well with the medium-full strength and body. The construction was fantastic as well, and the same goes for the draw. Really well made cigar.
John: The Tatuaje Fausto The Old Man and the C Lancero was pretty consistent in strength and flavor delivery for the first and second thirds. I wish the last third had maintained that same level of complexity, but overall I found it to be a good experience and I’m glad to have had the opportunity to review one. At times the flavor profile did remind me of the original The Old Man and the C Lancero, and I’ll likely be on the hunt for more of these if only because of the presentation and collectability. Construction was quite good, with a flawless burn and some resistance to the draw. Total smoking time was 2 hours and 10 minutes.
Jiunn: I found the overall profile to lack depth and consistency. The flavor profile of cedar, red pepper, cocoa and dry soil worked best in the second third, where it captured the most amount of harmony. But for the majority of it, the Tatuaje Fausto The Old Man and the C Lancero was too spice and earth forward. I look forward to the culebras for a better experience.