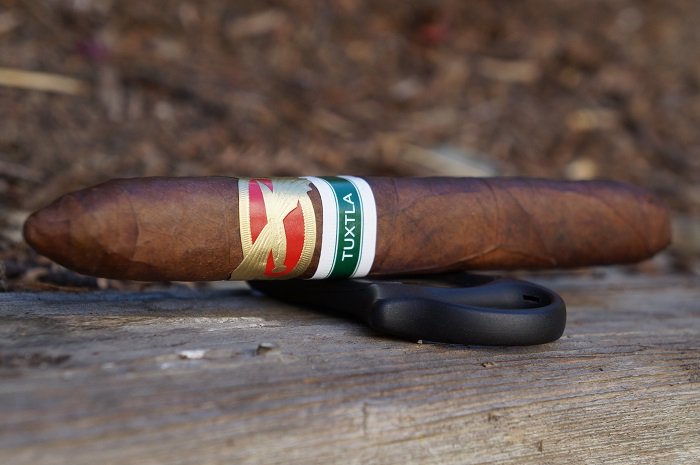 Aaron: The figurado shaped Tatuaje Avion Tuxtla has a wrapper that is medium brown with some darker marbling. There are some thick, but lightly raised veins with the seams pretty smooth and the tapered head well finished. There are two bands, with the primary being the traditional red, gold and black design for this line and the secondary being the green and white band used across the series. The aroma from the wrapper is sweet wood, earth and cocoa powder while the foot brings wood and black tea. The pre-light draw brings aged cedar along with a mild spiciness on my lips.
Seth: Well pressed figurado. The Tatuaje Avion Tuxtla is finished with a toothy wrapper that has medium to large sizes veins throughout. Firm throughout. Beautiful aroma of rich earth, dark chocolate, espresso beans, leather and barnyard. Spices as well.
John: The Tatuaje Avion Tuxtla comes in cellophane and does not have a UPC sticker. The cigar is perfecto shaped and has the additional artisanal complication of being box pressed. The cigar is double banded with an Avion Tatuaje primary band and a white on green Tuxtla secondary band. Aromas from the wrapper included sweet bread and mild wood. From the foot, I was picking up on syrupy sweet tobacco and bread.
Jiunn: The Tatuaje Avion Tuxtla is quite a beefy looking cigar, giving a Colorado Maduro wrapper shade. Veins are well pressed, seams tight, bunch and roll even and head well wrapped. Aromas from the wrapper tell of rich cedar and subtle hay. Aromas from the foot give black tea and spicy cedar. Cold draws reveal subtle cedar and hay. 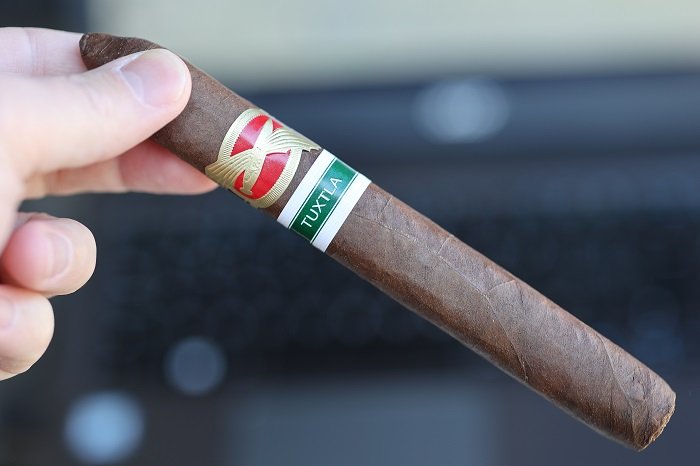 Aaron: The cigar begins with toasted cedar, earth and baking spice. At a quarter inch in, a light cocoa powder note joins. At three quarters of an inch in, the cedar has transitioned to oak and the earthiness is now dry and closer to the front. The retrohale is toasted oak, dry earth and mild baking spice. At an inch and a quarter, the toasted oak and dry earth are now even up front. As the third comes to a close, the profile is toasted oak and dry earth even up front with baking spice and cocoa powder a fair distance behind. The strength was slightly above medium.
Seth: The first third starts out with lovely earth notes that have some toasted nut and cocoa qualities. Bits of hazelnut and espresso beans present with some leather, wood and spice. Medium in strength and body.
John: The first third opens with bread, baking spices and a clean wood to finish. There is some delayed pepper on my lips as the cigar progresses. There’s almost a lavender floral character coming through the retrohale as it settles in. Some powdered cocoa presents on the retrohale as it moves towards the halfway mark.
Jiunn: The first third is earth forward, with dirt/soil, leather, stale cedar and toasted nuts. Retrohaling gives very nice dried red pepper spice and cherries. The finish is lengthy with leathery tannins and dried red pepper spice. Strength and body is medium. 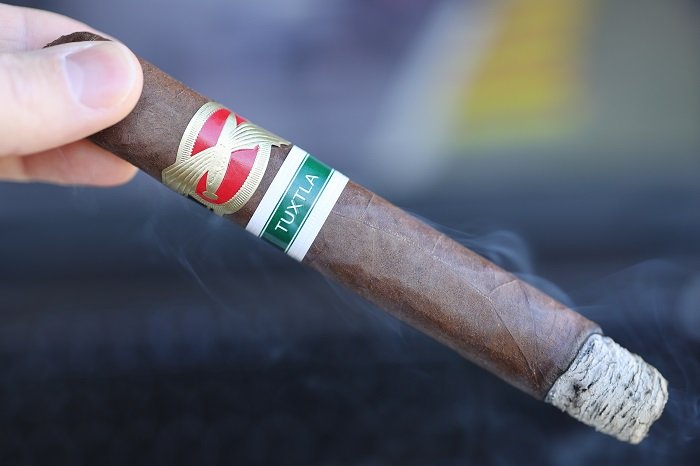 Aaron: The second third starts with a continuation of the first third. At a half inch in, the cocoa powder is no longer present and the baking spice transitions to black pepper. The retrohale is now just toasted oak and dry earth. At an inch and a quarter, the dry earth takes a slight lead in the profile. As the third comes to a close, the dry earth is in front of the toasted oak with black pepper in the background. The strength remained at slightly above medium.
Seth: The second third is in line with the first third and I am getting hazelnut, coffee, cocoa and earth notes. Bits of leather, wood and spice as well. Medium in strength and body.
John: The second third kicks it off with creamy baking spices, wood and a mild, sweet wood to finish into the post draw. As the second third settles in, chocolate and mild citrus adds to the flavor list. At some point as it moves towards the halfway mark, baking spices join the wood on the post draw, both flavors at medium strength.
Jiunn: There’s a little relief from the earth forward tones in this second third. The toasted nuts become fuller. But the overall feel is still full of earthiness in stale cedar, dirt/soil, leather and its accompanying tannins. Strength is leaning towards medium-full, while body maintains a consistent medium. 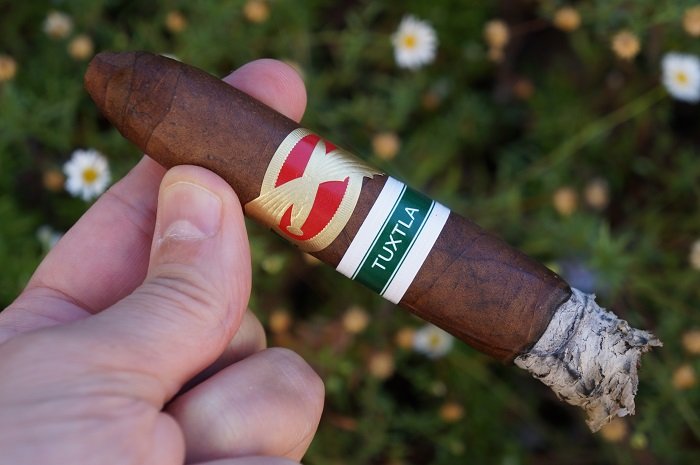 Aaron: As the final third begins, a light minerality joins the profile. At a half inch in, the toast level increases. The retrohale now has the dry earth ahead of the toasted oak. At an inch and a half in, a mintiness joins the profile. As the cigar wraps up, the dry earth is ahead of the toasted oak with light amounts of black pepper, minerality and mintiness in the background. The strength remained at slightly above medium.
Seth: The final third was a little more rich than the first third, and I was getting a little bit more strength. Spices, cocoa, earth, wood, leather and espresso beans. Medium in strength and body.
John: The profile is wood forward here, with baking spices in the center and wood into the post draw. Once the last third has settled in, some mild coffee breaks into the retrohale, but is pushed down by the wood. Mild earth joins the post draw is it continues.
Jiunn: The only change in the final third is strength up ticking to medium-full. Aside from that, still a very dirty earth profile of dirt/soil, leather and tannins, stale cedar and toasted nuts. Body finishes the same medium. 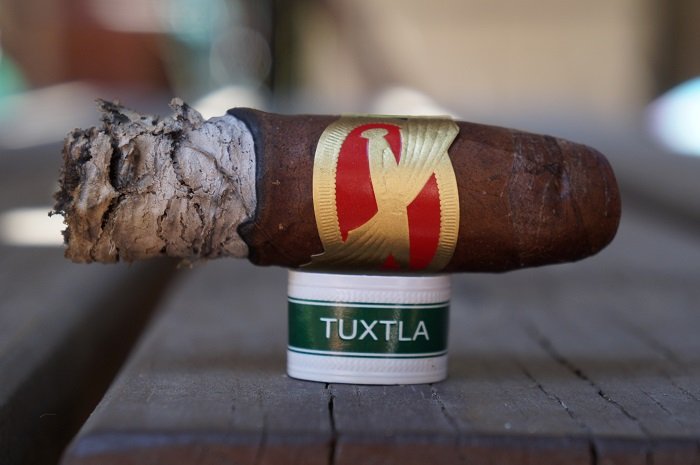 Aaron: The burn was a bit wavy at times, but never needed any attention. The ash held on in inch and a half increments.
Seth: Burn was very good from start to finish. Well constructed.
John: The burn was straight through the first third, with some wrapper not combusting into the second third, eventually requiring a touch-up to correct in the last third. Ash held on well in one inch increments.
Jiunn: Aside from a couple quick touch-ups to get the burn back on track, the burn performance was very good. Overall tight ashes, good smoke production and cool burning temperature. 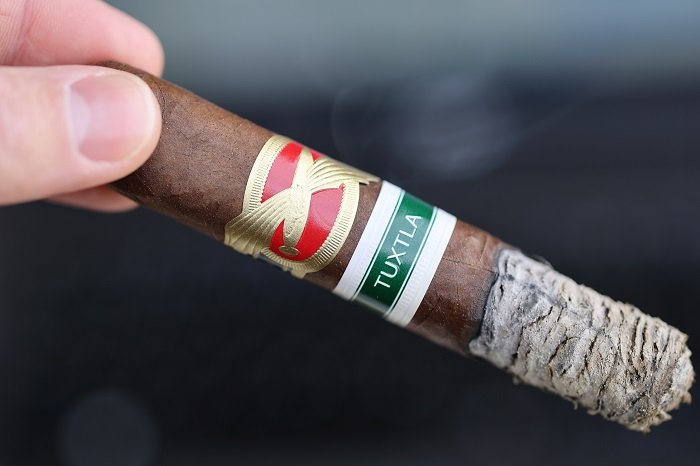 Aaron: The draw was slightly tighter than I prefer, but didn’t cause any issues with the smoking experience.
Seth: Great draw throughout.
John: The draw was into the resistant spectrum, roughly 2-1/2 to 3 notches.
Jiunn: Draw was perfect, giving the best balance of air flow and resistance.

Aaron: The cigar began with toasted cedar, earth and baking spice. Some cocoa powder joined in fairly quickly. Later, the cedar transitioned oak. The second third saw the cocoa drop out and the baking spice transition to black pepper. The final third saw some minerality and mintiness join in. The Tatuaje Avion Tuxtla was very cedar/oak and dry earth focused, not surprising with how the other cigars in this series played out. The profile, again, felt like it was overpowered by the wrapper and didn’t create an experience that really captured my attention. This cigar and the series just missed for me, and I don’t see myself really coming back to any of them.
Seth: I found the Tatuaje Avion Tuxtla to be the most enjoyable of the Tuxtla offerings. With that, a really good Mexican offering overall. Brought me back to all the past Avions I have smoked, which was enjoyable as well. A good experience. Balanced cigar with great construction and draw. Enjoyable flavor profile. Nice notes of cocoa, espresso, earth and leather.
John: The biggest challenge I see with a larger cigar is making the profile engaging enough to keep you interested for almost 3 hours, but not so full bodied that your palate is fatigued before you’re even halfway. I think the Tatuaje Avion Tuxtla manages to walk that fine line by providing interesting flavors that kept me engaged, without me being bored or overwhelmed at any point. Although the last third wasn’t as complex as the rest of the cigar, it was still pleasant. The burn was almost perfect with a single touch-up, and the draw was somewhat into the resistant zone. I would smoke the Tatuaje Avion Tuxtla again, but it would be a more targeted choice with a smoking time that was 2 hours and 43 minutes.
Jiunn: At this point, our team has reviewed all the Tuxtlas. And my overall take is, Mexican San Andres wrapper doesn’t work well with the vast majority of these blends. The wrapper imparts too much gritty earthiness, overtaking much of the nuances of the blends. Good concept, but I’ll stick to the prior blends.