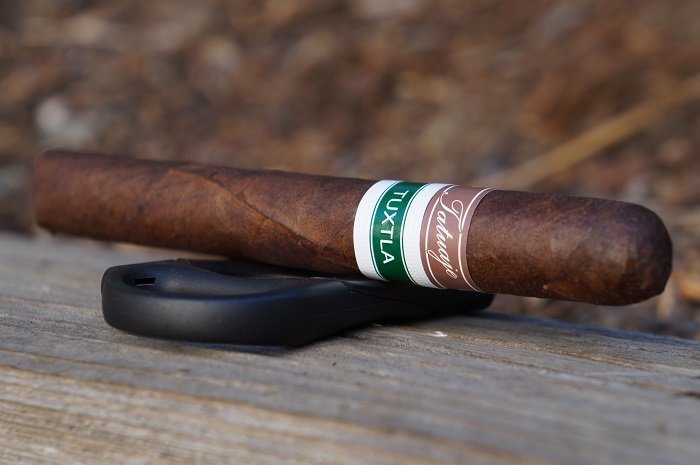 Aaron: The wrapper on the Tatuaje 7th Tuxtla is medium brown with some decently raised veins and a fine tooth. The seams are raised in some areas while the caps are well applied. There are two bands, with the primary being the traditional brown label design for this line and the secondary is the green and white Tuxtla band for this series. The aroma from the wrapper is a mix of earth and cocoa powder while the foot brings earth, cocoa powder, wood and mild spice. The pre-light draw brings aged cedar and a light earthiness along with a mid-level spiciness on my lips.
Seth: The Tatuaje 7th Tuxtla has a very strong aroma of manure, rich earth, bitter chocolate, barnyard, spices and some ammonia. The cigar is beautiful in appearance with a great triple cap. The wrapper shows few veins and those present are small to medium in size. Nice color of solid maduro. Some coffee bean notes as well. Very firm in hand.
John: The Tatuaje 7th Tuxtla comes in cellophane and does not have a UPC sticker. The cigar is double banded with the classic brown Tatuaje primary band and a white on green ‘Tuxtla’ secondary band. The aromas from the wrapper included an earthy molasses, with dry wood underneath along with a faint vegetal component. From the foot, I picked up on sweet tobacco and hay.
Jiunn: The Tatuaje 7th Tuxtla has a Colorado Red wrapper shade on this partially cloudy humid day. Great oil content and toothiness on the wrapper. Veins are well pressed, seams tight, bunch and roll even and head is well wrapped and capped. Aromas from the wrapper tell cedar, anise and hay. Aromas from the foot give welcoming white pepper spice, cedar and hay. Cold draws reveal cedar and hay. 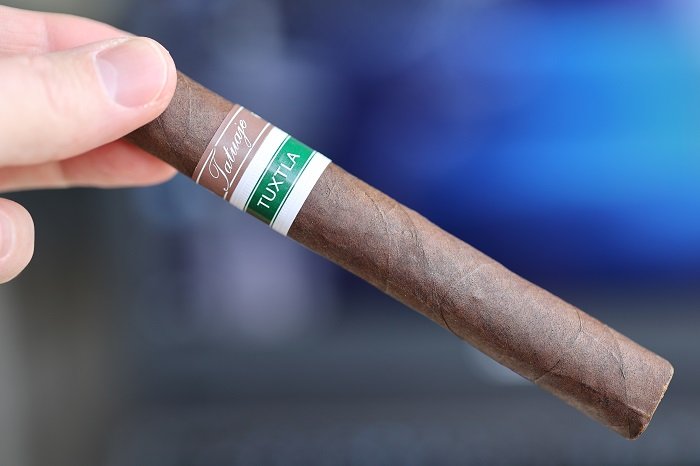 Aaron: The cigar begins with dry wood, earth and light baking spice. At a half inch in, a mellow creamy coffee note has joined. The retrohale is mildly toasted oak and earth. At an inch and a quarter, the earth takes the lead in the profile. As the third comes to a close, the earth is slightly ahead of the dry wood with some light baking spice in the background as the creamy coffee has departed. The strength in this third was slightly below medium.
Seth: The first third starts out with strong manure notes with some red pepper, damp earth and faint cocoa notes. Bits of wood and leather present as well on the finish. Medium-full in strength and body.
John: My first few puffs bring flavors of creaminess, spices, wood and an earth to finish with spices joining in a delayed fashion. The center of the profile is largely wood forward out of the gate. Some faint post draw leather forms as the first third settles in. A mild chocolate is present on the retrohale, along with mild sweetness some time later.
Jiunn: Interestingly enough, my initial (typical) thoughts aren’t about the flavors. I automatically think about the good tannins and nice body (medium-full ). But in terms of flavors, lots of leather, almonds and fluffy and chewy bread. Retrohaling introduces dried red pepper spice and a touch of cream. The finish is heavy on the leather tannins and subtle cedar. Strength is medium. 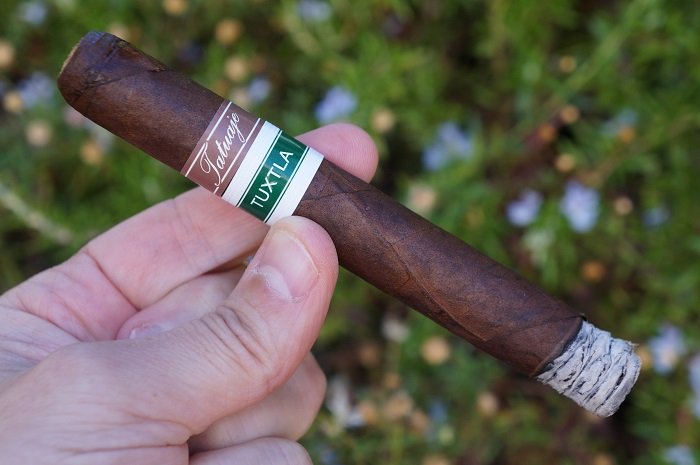 Aaron: As the second third begins, the earth and dry wood become even again. At a half inch in, the overall profile is now a bit dry. The retrohale is now toasted oak, earth and mild cocoa powder. As the third comes to a close, the earth and dry wood remain even up front with mild baking spice in the background. The strength has bumped up to medium.
Seth: The second third is fairly in line with the first third. I am picking up those sharp spice notes that are paired with mineral and earth qualities. Bits of coffee, cocoa, wood and leather on the finish. Soft creaminess as well. Medium to medium-full in strength and body.
John: The second third opens wisth creamy spices, and a spicy wood combination to finish. There is some post draw earth that is a bit delayed on the finish. That earth from the post draw picks up to medium strength, approaching the halfway point.
Jiunn: The second third continues to show good tannins and body. The flavors become creamier, similar to the consistency of heavier bodied milk. Other flavors of leather, almonds and chewy bread are still in full effect. Strength and body is unchanged at medium and medium plus. 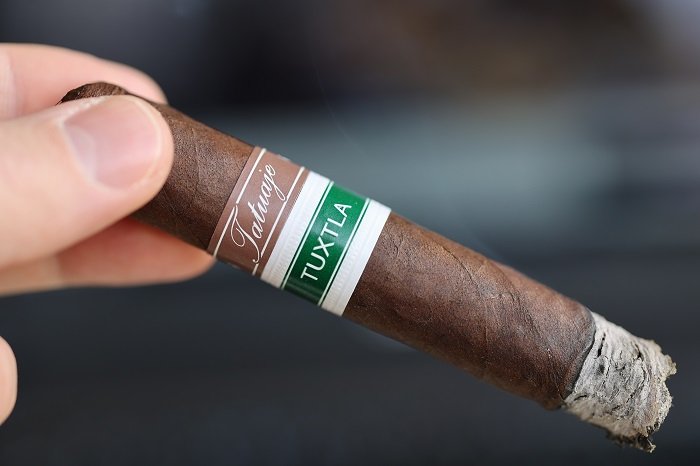 Aaron: As the final third begins, a light minerality joins the profile. At a half inch in, a light jalapeno note joined in. The retrohale remains toasted oak, earth and mild cocoa powder. At an inch in, the earth gains a toast note and the jalapeno note transitions to a vegetal note. As the cigar wraps up, the profile is toasted earth and wood up front with baking spice, minerality and a vegetal note in the background. The strength remained at medium.
Seth: The final third delivers a flavor profile of earth, minerals, balanced pepper spice, leather, cocoa and some cream. Fairly like the second third, but softer. Balanced. Nice finish. Medium to medium-full in strength and body.
John: Creamy earth leads off, as a strong medium-plus post draw earth and trailing wood makes up the post draw. The only other evolution here is baking spices that come through on the retrohale by the halfway mark.
Jiunn: The final third tips the scale such that there’s too much leather tannins. This makes the other flavors much less noticeable. Strength and body finishes the same medium and medium-full. 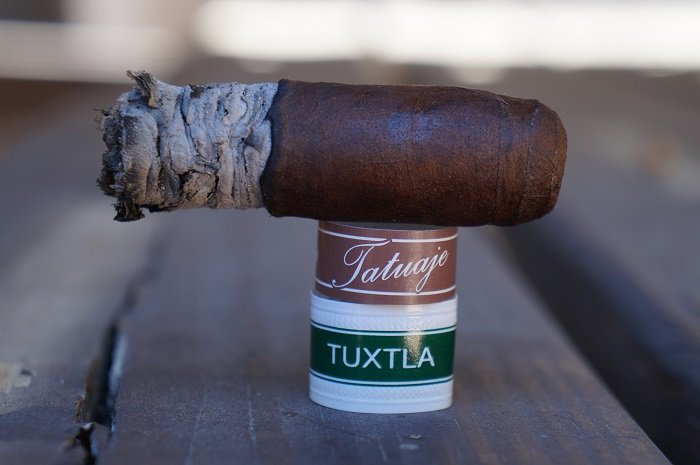 Aaron: The cigar was a bit wavy through the first third as it ran along a seam, but then self corrected and was straight the rest of the way. The ash held on in inch and a quarter increments.
Seth: Great burn throughout.
John: The burn started out straight, becoming uneven in the second third. A touch-up was performed in the second third, and not long after, the burn started to stall. The cigar went out in the last third, requiring a re-light.
Jiunn: Great burn. Even burn, solid ashes, cool burning temperature and ample smoke production. 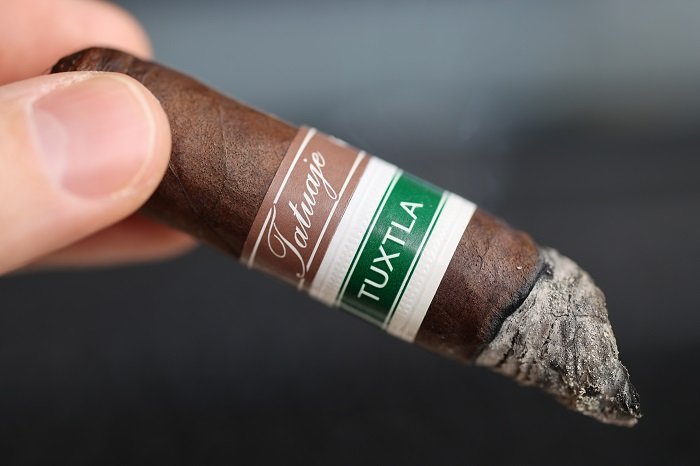 Aaron: The draw was slightly tighter than I prefer, but didn’t cause any issues with the smoking experience.
Seth: Perfect draw.
John: The draw was well into the resistant spectrum, roughly 3-1/2 to 4 notches resistant.
Jiunn: A notch too tight, but it didn’t hinder the flavor experience all that much.

Aaron: The cigar began with dry wood, earth and light baking spice. A mellow creamy coffee joined for a bit and then departed. The final third saw some minerality join and then a jalapeno note join which then later transitioned to a vegetal note. The Tatuaje 7th Tuxtla had a fairly average flavor profile throughout that was very earth and wood focused that became dry by the second third. With this wrapper, those are typical flavor components, but I don’t feel that this blend did enough to work with that and became a bit overpowered by it. Not a cigar I’d see myself returning to.
Seth: The Tatuaje 7th Tuxtla has continued down all the Tuxtla roads and delivered an average flavor profile. The wrapper is way too powerful for the blends. It really dominates the entire blend. I did not think this was a bad cigar by any means, but I was hoping for more complexities and depth.
John: The Tatuaje 7th Tuxtla started out with an interesting combination of flavors in the first third that were all balanced. By the second third, it was still pleasant but didn’t elevate above average for the remainder of the review. Both the burn and draw had issues, with the draw being well into the resistant spectrum and the burn requiring a single touch-up and a re-light. The price point on these is quite reasonable and based on that alone I would likely give this cigar another try to see if the results were the same. There’s no doubt that the combination of a resistant draw and burn issues would have impacted flavor performance. My total smoking time was 1 hour and 45 minutes on the nose.
Jiunn: In my opinion, in true, fairly typical fashion, Pete nails the body. There aren’t that many good cigars with medium plus body these days, but Pete seems to know how to achieve that and pair it with flavors that compliment it quite well. Even with this said, I still prefer the Habano versions of the Brown Label. But this Tatuaje 7th Tuxtla was neat to smoke for a little change up.