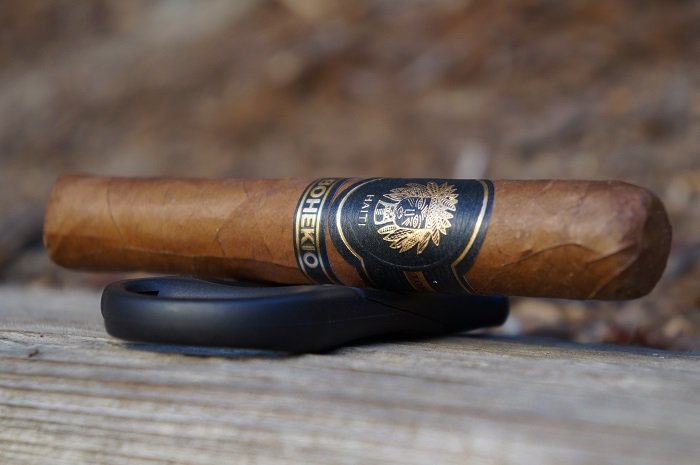 Aaron: The wrapper on the Supreme Tobacco Bohekio Robusto is medium brown and has a couple of decently raised veins along with a network of smaller ones. The seams are pretty smooth and the caps are well applied. There are two bands, both black and gold, with the primary carrying an image of someone wearing a head dress and denotes the company name and country. The secondary band denotes the line. The aroma from the wrapper is a mix of musty wood and dry hay while the foot brings wood and sweet hay. The pre-light draw brings musty, slightly young cedar along with a mild spiciness on my lips.
Seth: The Supreme Tobacco Bohekio Robusto has a beautiful Colorado wrapper. Red clay coloring. Firm throughout. Few veins, medium in size. Smooth in texture. Aromas of sweet spices, leather, earth and herbs.
John: The Supreme Tobacco Bohekio Robusto comes in cellophane, with a UPC sticker that tears when the cellophane is opened. The cigar is double banded with a ‘Bohekio’ secondary band. Aromas from the cigar included mild sweet tobacco, along with hay and raisin. There is mild tobacco and hay from the foot.
Jiunn: The Supreme Tobacco Bohekio Robusto has a nice even Colorado wrapper shade. Wrapper looks of quality, giving fine traces of tooth. Veins are well pressed, seams tight, bunch and roll firm but even and head well wrapped. Aromas from the wrapper tell of abundant black tea and cedar. Aromas from the foot give rich white pepper spice and roasted nuts. Cold draw tells dehydrated vegetables and subtle nutty sweetness. 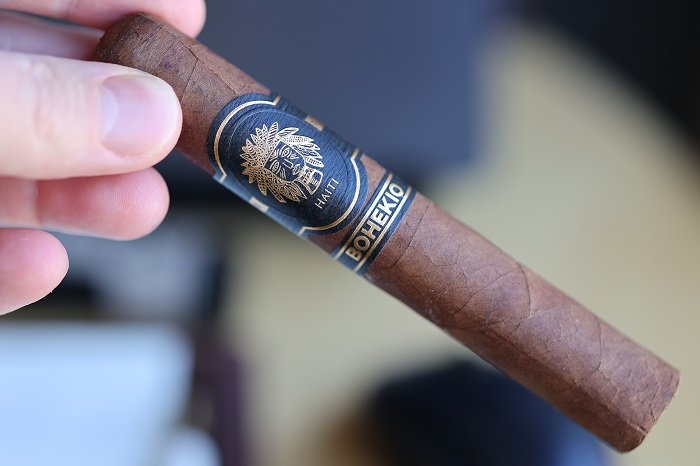 Aaron: The cigar begins with a lightly musty and toasted stale cedar. The retrohale brings a more concentrated musty, toasted cedar without the staleness. As the third comes to a close, the profile is slightly fuller, but still a combination of the same components. The strength in this third was mild-medium.
Seth: The cigar starts out with some salted wood notes, and there are some light citrus, herbal and coffee flavors present as well. There is a little bit of spice, but it is not over the top with pepper. In terms of strength and body, I would classify the cigar as a solid medium.
John: The first third kicks things off with creamy cedar and chocolate. There are mild coffee notes through the retrohale. Some intense baking spices come from nowhere around the 10 minute mark. Not long after, baking spices fall back to light plus for the remainder of the first third.
Jiunn: The first third provides the stereotypical cigar notes. It’s highly earth toned with flavors of cedar and dirt. There’s also some interesting herbal tea notes and general creamed sweetness as well. Retrohaling introduces spice, in the ways of white pepper and has the same herbal tea note. The finish has subtle dry and slightly bitter black tea. Strength and body is medium. 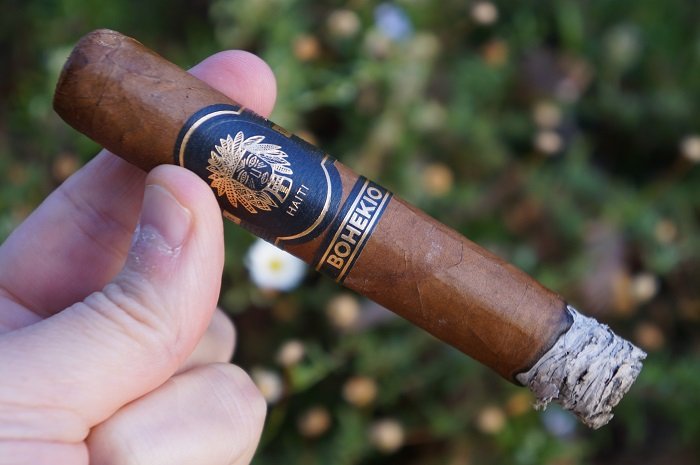 Aaron: As the second third begins, the cedar loses the staleness and gains a slight sharpness to it. At a half inch in, a light creaminess joins the profile. The retrohale is musty and creamy toasted cedar. As the third comes to a close, the toast level has picked up a fair amount. The strength in this third has bumped up to slightly below medium.
Seth: The second third was right in line with the first third. Very enjoyable flavor profile that is new to me. The salted wood notes are light but present, and I am picking up some herbal, coffee, light spice and earth flavors. There is this herbal creaminess as well. Medium in strength and body.
John: The second third starts wood forward, with creamy coffee and mild baking spices adding accent in the center of the profile. By the halfway point, the profile is entirely wood forward.
Jiunn: The second third provides more of the finish notes of dry and bitter black tea. The taste is similar to having black tea bag steep for too long, causing the tea to be more concentrated and bitter. Aside from that, there is still that general creamed sweetness. Strength and body maintains medium. 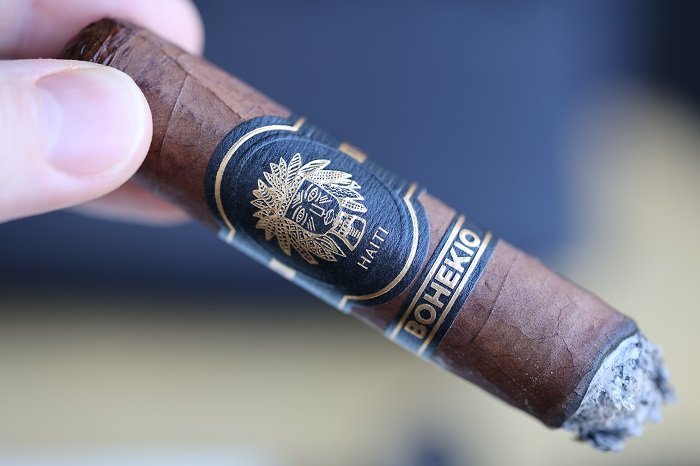 Aaron: As the final third begins, a light floral note joins the profile. At a quarter inch in, the creaminess departs as the heavily toasted cedar is a bit ahead of the mustiness while the floral note is faint in the background. As the cigar wraps up, the heavily toasted cedar and mustiness are back to even while there is still a faint floral note in the background. The strength in this third remained at slightly below medium.
Seth: The final third was a little flat, but it still showed some of the enjoyable flavors that were present in the first and second third. I am picking up those light pepper spice notes, lemongrass, salted wood and leather. Like before, medium in strength and body.
John: Sweet citrus and wood lead off the last third as earth finishes into the post draw. Some medium strength baking spices return to the retrohale as the last third settles in.
Jiunn: The final third creates equal parts of the same over-steeped black tea and general creamed sweetness. Although it’s equal parts, it has no bearing on increasing (or decreasing) the level of enjoyment. Strength and body finishes medium. 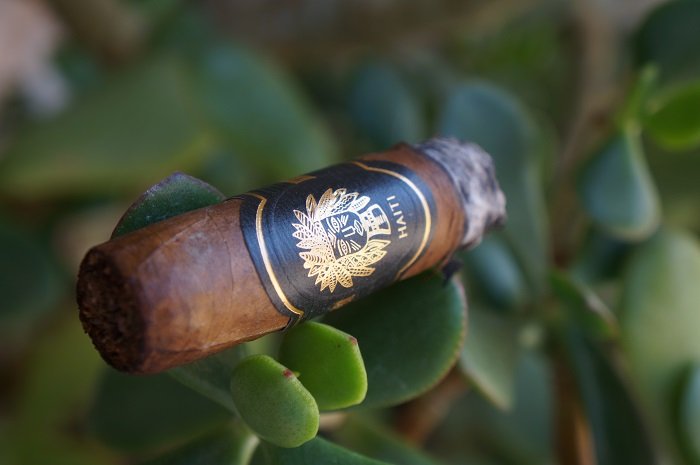 Aaron: The burn was straight the entire way, with ashes holding on in one inch increments.
Seth: Great burn throughout.
John: The burn was straight with a slightly flaky ash. The burn did seem to want to go out in the last third, but no attention was required.
Jiunn: Perfect burn. Even, solid ashes, cool burning temperature and good smoke production. 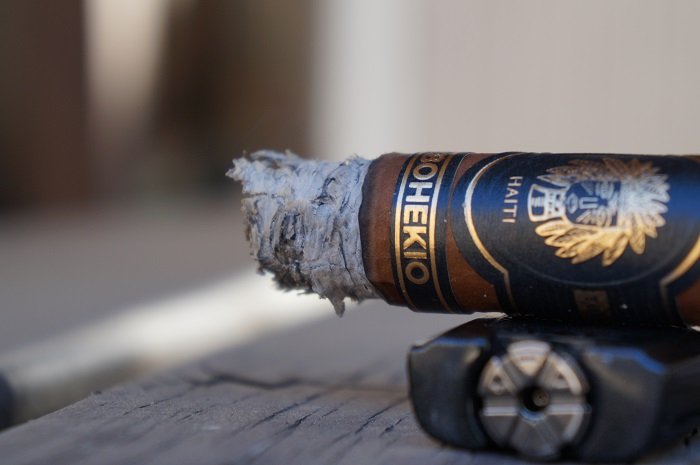 Aaron: The draw was perfect, with just the right amount of resistance that I prefer.
Seth: Perfect draw from start to finish.
John: The draw was extremely tight, essentially two notches above plugged, roughly 4-1/2 to 5 notches into the resistant spectrum. Examining the cigar showed firmly packed tobacco at the cap.
Jiunn: Perfect draw, striking the ideal air flow.

Aaron: The flavor profile was fairly linear, focused around musty, toasted cedar with some addition of creaminess and a floral note at times. Construction was absolutely perfect. Overall, the Supreme Tobacco Bohekio Robusto was fairly average. I haven’t smoked much in the way of Haitian tobacco, so it was interesting giving this a try. The blend needs something else to round out the profile. While the delivery was smooth and lighter strength, it was just a bit too boring to ride it out for the entire cigar. If the floral note could be a bit fuller and play a bigger role, I’d be cool with that or if the creaminess could do the same and maybe add some sweetness. I always like trying new brands, and especially something like this that is focused around a rarely used tobacco. I’m interested to see if the company comes out with future offerings that maintain a Haitian tobacco focus, but in terms of this release, it probably isn’t something I’d see myself returning to.
Seth: I am honestly not sure where I am with the Supreme Tobacco Bohekio Robusto. I need to smoke more. There is something about the Haitian tobacco that is funky. I don’t know why, but the whole time I was smoking the cigar I was thinking that this tobacco must have a low nicotine content. It seems light in many ways. There was also this quality to the tobacco that I get with some Dominican tobacco, but more often Cuban tobacco. I find it with island tobacco and I dig it. Interesting and light flavors with excellent construction. I need to smoke more.
John: The Supreme Tobacco Bohekio Robusto showed some promise in the first third but never seemed to achieve a balance of flavors or consistency through the smoking experience. While the flavor profile was never unpleasant, the overall delivery was slightly above average. I always enjoy trying releases from brands I’m not familiar with, and although I probably wouldn’t return to the Bohekio, I’d be interested in trying other offerings from Supreme Tobacco. The burn performance was flawless while the draw had significant resistance to it. Total smoking time was 1 hour and 49 minutes.
Jiunn: What does tobacco from Haiti taste like? Well, even after smoking the Supreme Tobacco Bohekio Robusto, I really have no idea. I actually kind of hope it doesn’t taste like this. Not that there was anything off-putting about this cigar, but it was just your run of the mill stuff. This is one of those cigars in which I would love to smoke the components. With all that said, I really don’t have a want to revisit this one anytime soon.