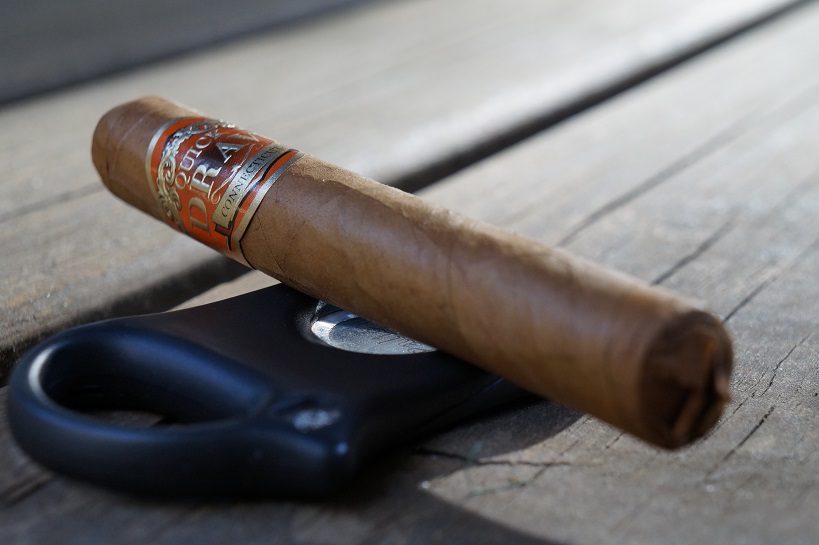 The cigar is a dark yellow/light brown color. The wrapper is very smooth with a couple of easily visible veins and a few much smaller and less noticeable. The wrap lines are visible but also very smooth. The foot is covered with excess wrapper and you can easily tell how thin this wrapper is. The head has its caps applied very well and there is a bit of a twist at the tip of the cap rather than a smooth final cap. The band goes pretty well with the cigar as the colors of orangish red and gold are complimentary to the color of the wrapper. Looking at the whole thing somehow reminds me of a sunrise as the colors are bright and yellow and a bit washed out. I don;t really get much of any aroma from the wrapper. At the foot, I get some tobacco sweetness as there is just a tiny opening where you can see a bit of the filler. The pre-light draw brings a very distinctive leather flavor with a bit of tingle on my lips. 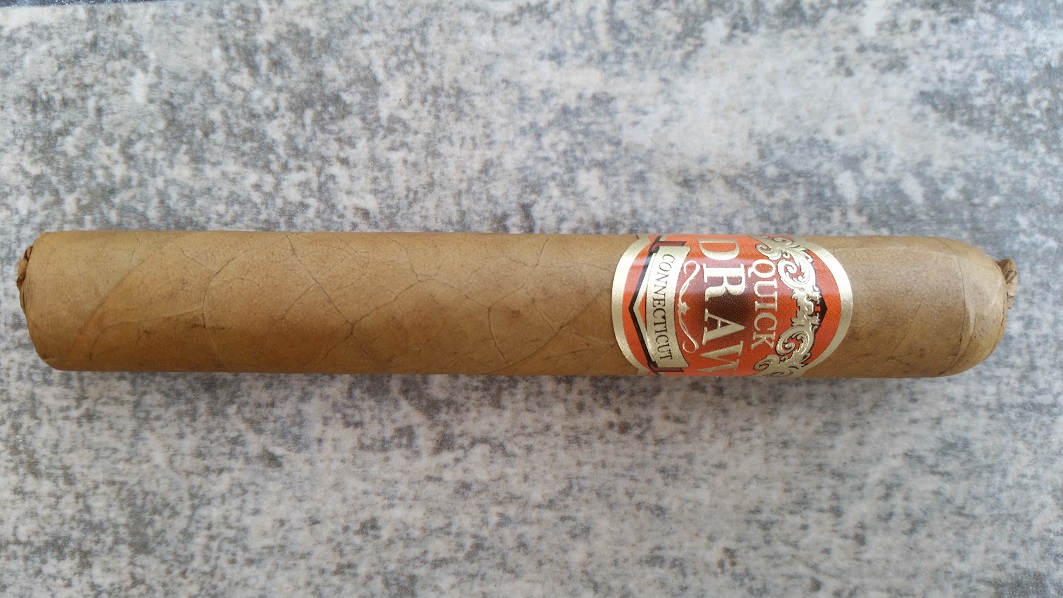 The Southern Draw QuickDraw Connecticut Petit Corona has a fairly smooth and velvety light brown wrapper. The flare of the pigtail cap and enclosed foot is a nice added touch to the overall presentation. The veins are pressed well and seams almost invisible. The cigar feels well rolled with just the right amount of give and no soft spots being present. Wrapper smell of strong barnyard and cedar. Foot smells the same as the wrapper. Cold draw tells namely cedar and dry card board.

The initial draw, with all of that wrapper leaf over the foot, brings a heavy cinnamon flavor. Moving past the foot, a spicy cedar comes into play with the cinnamon still on the finish but dialed back quite a bit. About a third of an inch in, the smoke begins to dry out. It is still carrying the spice, but the cedar flavor has backed away. The retrohale is sweet cream with some of the spiciness from the mouth flavor. A general woodiness is now coming in to go with a light cream and very dull spice which I’m still likening to cinnamon. Halfway through the third, the cinnamon really picks up on the retrohale. Nearing the end of the third, the smoke is still pretty drying but also carries a creamy flavor at the same time. The cinnamon on the retrohale has now mellowed out some. As the third finishes, the cinnamon has completely left the retrohale and the smoke is less drying and the creaminess has gradually increased with just a slight bitter finish. The strength is just a hair under medium. 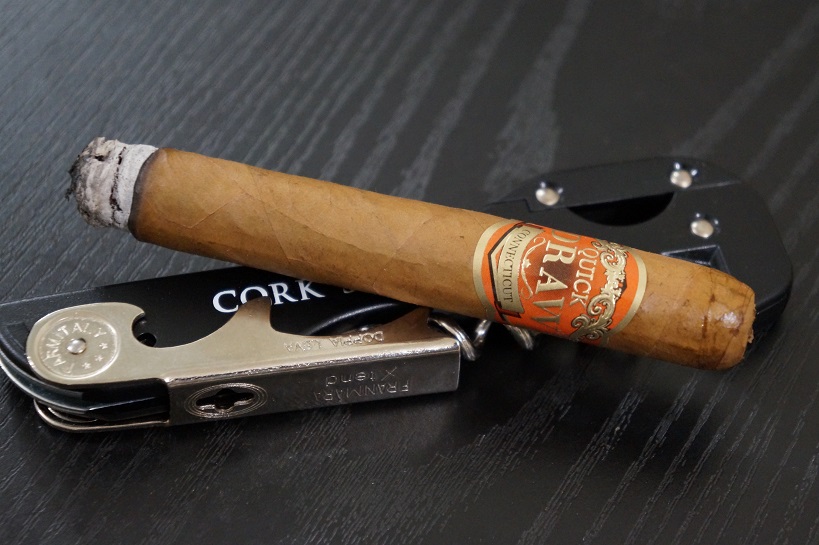 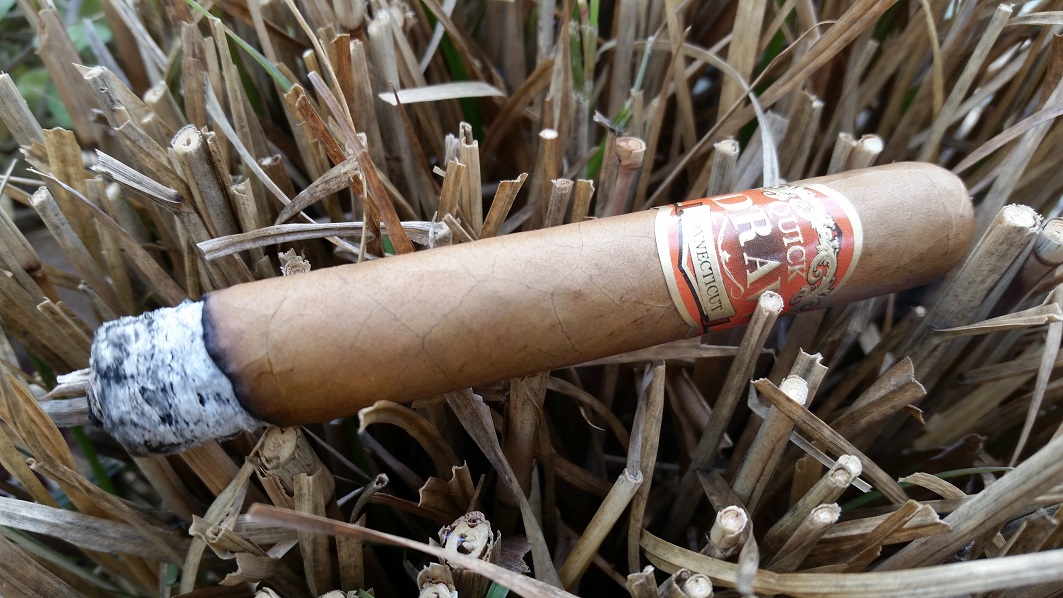 As this third begins, it picks up a bit of pepper, both in the mouth and on the retrohale. There is a slight bitterness present, but it is not off putting as it brings a bit of balance to the cream and pepper. A quarter of an inch in, the bitterness picks up a bit and is now drowning out the other flavors. The smoke is still slightly drying. About three quarters of an inch in, the bitterness drops back a bit and the creaminess ramps up again, achieving a much better balance. Just past the halfway point, the woodiness is returning to mix in with some cream and a bit of bitterness. The retrohale is now very oaky. Nearing the end of the third, a bit of black tea is coming in to mix with the woodiness, creaminess and bit of bitterness. As the third finishes, the smoke becomes drying again with primarily wood and bitterness. The strength in this third is now a true medium. 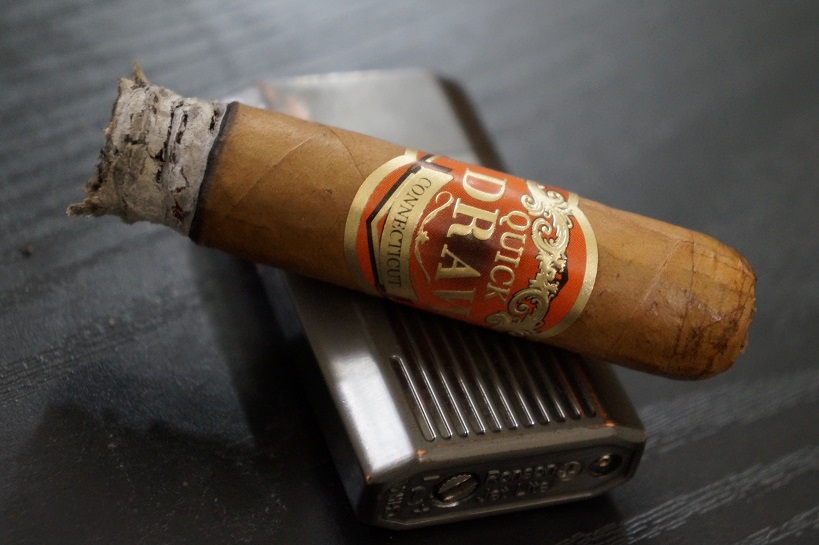 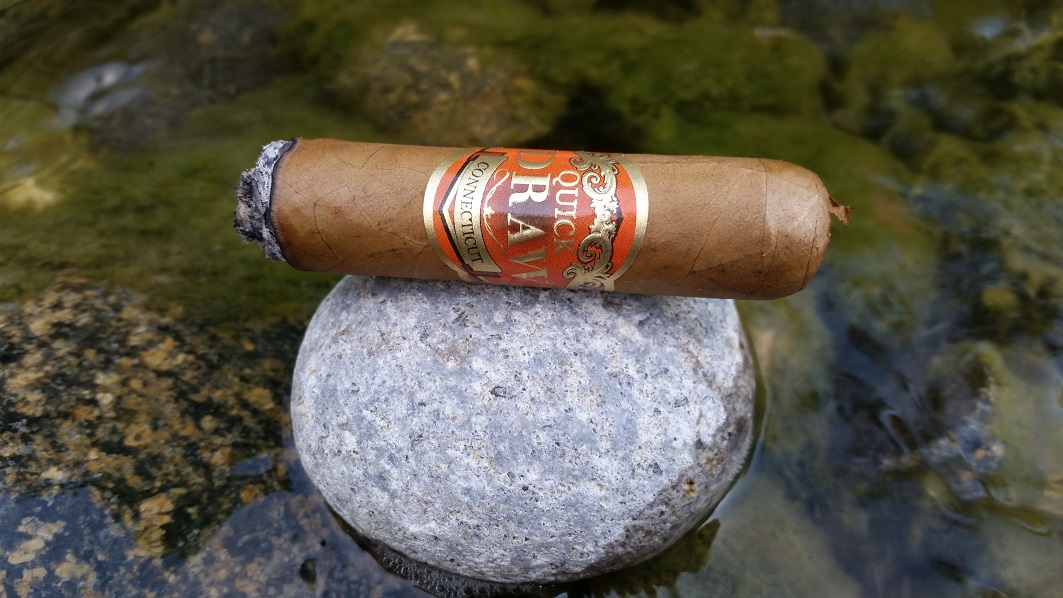 The second thirds core flavor profile is fairly similar to the latter part of the first third. Still notes of caramelized sugar, bitterness, cedar and tongue sticking black pepper spice (although the spice level has increased, especially noticeable on the retrohale). What has left is the butter richness and coffee notes. There is also intermittent floral notes but this is often times over shadowed by the black pepper spice. Body and strength still at a solid medium. 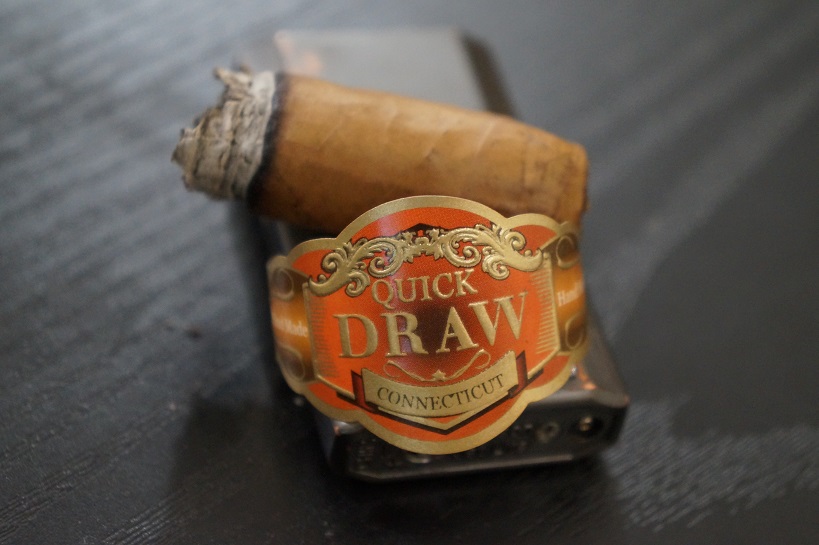 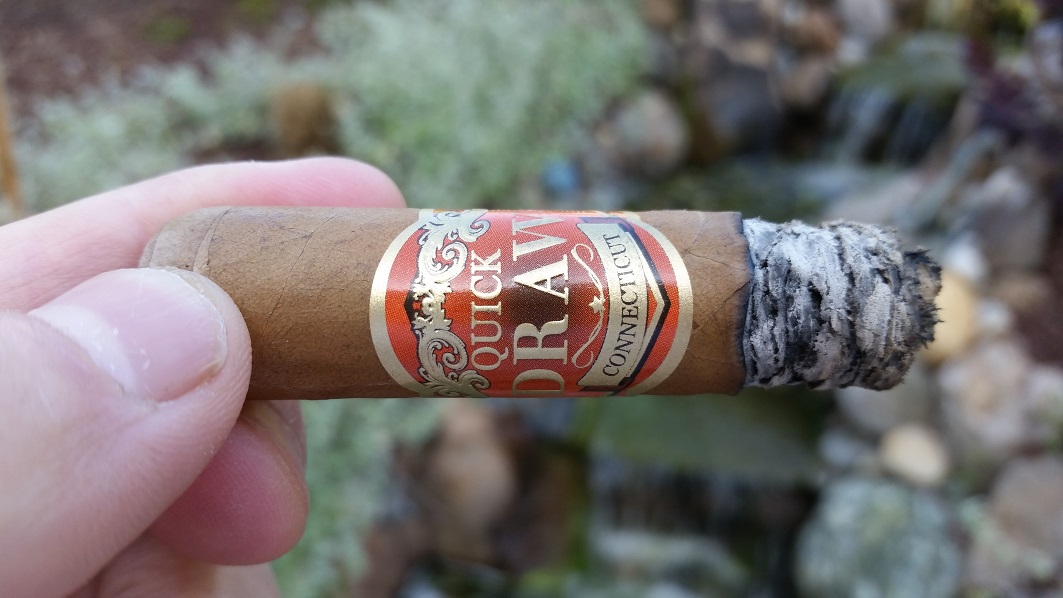 Last thirds flavor profile almost mimics the second thirds except for one small, but major difference. The cigar is still a medium strength and bodied sweet and spicy profile. Still tasting caramelized sugar, cedar and tongue sticking black pepper spice. But the bitterness has amplified, often times allowing the aforementioned notes to be dominated by the bitterness.

The burn was perfect. It was razor sharp the entire way and the ash held on in one inch chunks or more and only dropped when ashed. 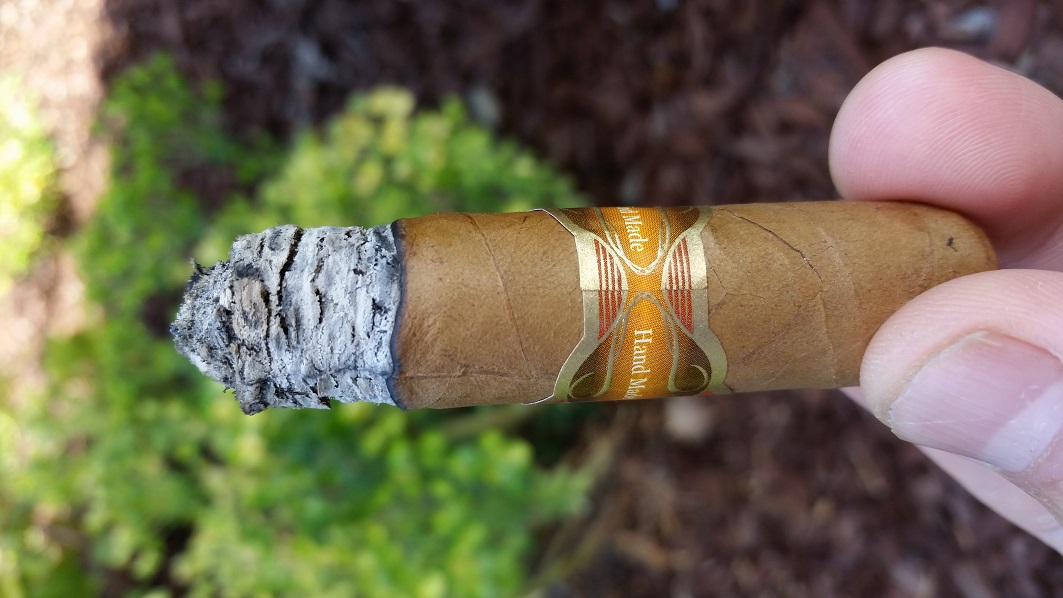 Typical of cigars rolled out of Tabacalera Fernandez, the burn was razor sharp and even. The ash held on strong the entire time having average ash marks of one inch.

The draw was just slightly tighter than I prefer, but not really a big deal. It had no effect on the smoking experience.

The cigar started off strong with very good flavors in the first third. Bitterness started creeping in as the second third went along and then took over in the final third which was unfortunate. I’m hoping that some resting time might tame the bitterness. The performance of the cigar was really top notch and is what all cigars should strive for. I would say that this cigar would work really well as a morning smoke paired with some coffee. Coffee with cream would work really well with my experience in the first third, but black coffee would probably work better after that to see what effect it has in combination with the bitterness. At the price point, I would say that it’s worthwhile to pick a couple up. The flavor profile and strength would probably fit in well with most smokers.

The draw, just like the burn, was fantastic. Just the right amount of give.

Given the new wave of semi-recently released Connecticut cigars, the Southern Draw is a strong contender amongst the competition. There is a great interplay of sweetness and spice that can be enjoyed in the morning, day time or even night time. The only downside is the prevailing bitterness that hopefully will adjust given some more age.