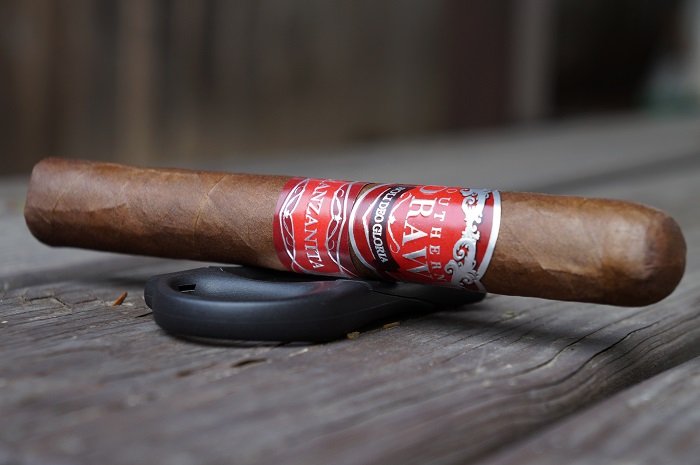 Aaron: The wrapper on the Southern Draw Manzanita Toro is medium brown and is a bit darker towards the foot than the head. There are a few large and decently raised veins present and there is a fine tooth throughout. The seams are easily visible as they are a bit raised and the caps are applied decently. The cigar has two bands, following the standard design for the brand and this line carries a red, silver and black color combination. The primary designates the brand and the secondary designates the line. The aroma from the wrapper is a mix of leather and hay while the foot brings wood and tobacco sweetness. The pre-light draw brings wood, tobacco sweetness and the faintest of cinnamons. There is also a mild spiciness on my lips.
Seth: The Southern Draw Manzanita Toro is finished with a dark Colorado wrapper that has some great red clay coloring. It has a nice shine to it, but it is not oily in texture. It has a finely sanded finish. There are few veins present, but they are medium in size. The wrapper is giving off an aroma of dry spices, fresh wood shavings and leather. The foot is delivering some earthier qualities, but it continues to show those wood, leather and spice notes as well.
John: The Southern Draw Manzanita Toro is double banded, with the secondary band indicating ‘Manzanita’. It also has a UPC sticker with an integrated tear point so the UPC remains intact once the cellophane is opened. Aromas from the cigar included a rich, bready sweetness with faint aged wood underneath. Similar notes from the foot including shortbread and stewed raisins.
Jiunn: The Southern Draw Manzanita Toro has a gorgeous oily wrapper. Veins are well pressed, seams tight, bunch and roll even and head well wrapped. Aromas from the wrapper give cedar and barnyard stank. Aromas from the foot give leather, white pepper and cedar. Cold draw tells some cedar and dried nuts. 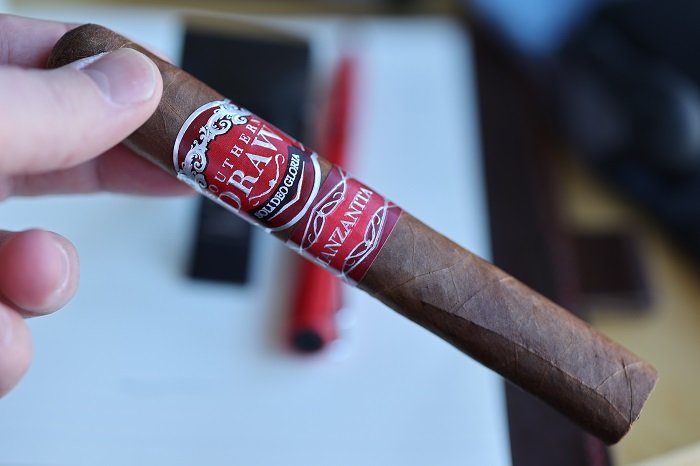 Aaron: The cigar begins with lightly charred cedar, mustiness and mild black pepper. At a half inch in, the char eases into a mid-level toastiness and the black pepper has picked up in fullness a fair amount. The retrohale begins with musty cedar and then a full wave of black pepper comes flooding in. At an inch and a quarter, the black pepper has mellowed back to where it was when the cigar started. As the third comes to a close, the musty, toasted cedar is up front while the black pepper has increased a bit in the background. The strength in this third was slightly above medium.
Seth: The first third delivers a flavor profile that is touching on some manure and barnyard qualities. I am picking up hay, cedar, leather and earth. There are some spice notes, and it is delivering this red and black pepper spice. On top of that is creamy cashew and almond flavor. The finish has this sharp lemon peel flavor with black pepper, and it is all over the place. In terms of strength and body, I would classify the cigar as medium-full.
John: The first third opens with a sweet bread and a shortbread which sits on the palate between draws. Baking spices at medium strength join in once it settles in. By the halfway point, cedar is finishing the draw.
Jiunn: The first third has a mixture of baking spices, leather and construction paper. Retrohaling gives deeper baking spices. The finish is on the shorter end with lingering soft baking spices and construction paper. Strength is almost medium-full, body is medium. 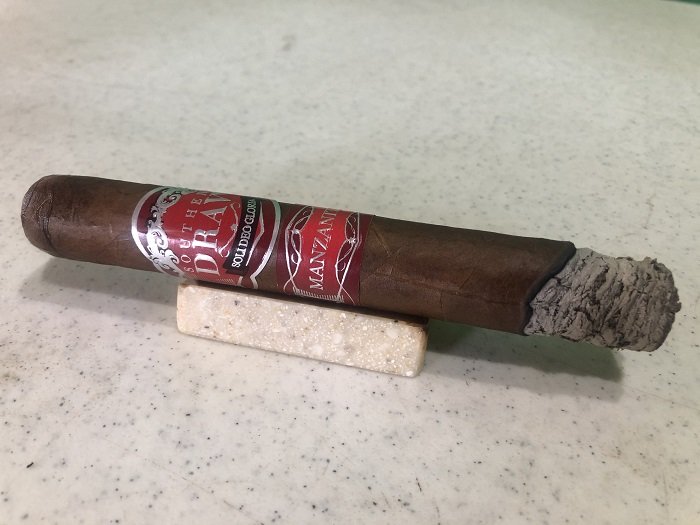 Aaron: As the second third begins, the musty and toasted cedar is up front with black pepper in the background. At a half inch in, the profile has become a bit dry. The retrohale now has the musty cedar and black pepper even. At an inch and a half in, some light, dry earth joins the profile. As the third comes to a close, the musty, toasted cedar and dry earth are even while a light black pepper remains in the background. The strength in this third remained at slightly above medium.
Seth: The second third delivers this leather, dry earth, lemon peel and peppery spice profile which is sharp and in your face. I am picking up some mineral notes with that, and it has this green tobacco flavor as well. Salt notes are present, and there is this faint herbal quality on the finish. The cigar is all over the place. In terms of strength and body, medium-full.
John: Sweet leather starts the second third. Citrus joins on the retrohale. Mild earth settles into the center of the profile by the halfway point. Some sharp bitterness comes through by the end of the second third.
Jiunn: The second third is still the same flavors, but shows a slight change in strength (now consistently medium-full). Flavors are still quite earth centric with leather, construction paper and baking spices. 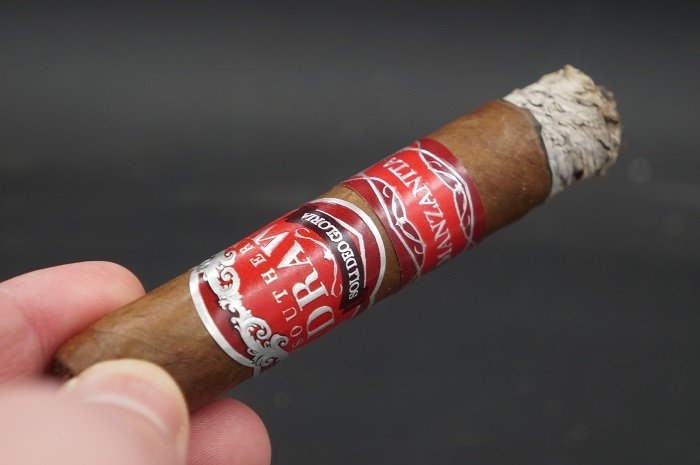 Aaron: As the final third begins, the toast transitions back to a light char while the black pepper is no longer present. At a quarter inch in, some bitterness becomes present, likely attributed to the charred cedar. The retrohale is musty cedar and dry earth. As the cigar comes to a close, the char has built up on the cedar and is just ahead of the dry earth with some light bitterness remaining. The strength in this third bumped up to medium-full.
Seth: Sour. Sour lemon, green tobacco and tons of black pepper. There are some sharp cedar and herbal notes as well. Not enjoyable and I would argue not smokable. Medium-full strength and body.
John: Creamy baking spices lead the profile into the last third. Some bitterness returning as it settled in. As the final third progresses, the bitterness faded.
Jiunn: The final third adds stale dried nuts to the overall same leather, construction paper and baking spices. Strength and body is still medium plus and medium. 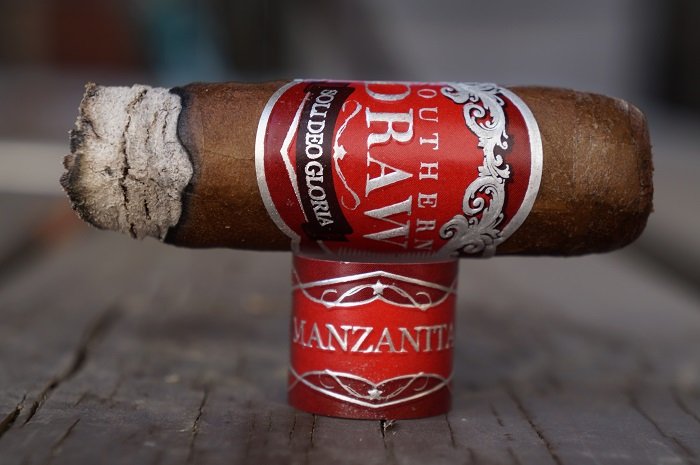 Aaron: The burn line was straight the entire way, but interestingly, the cigar went out three times in the second third and once in the final third, requiring re-lights.
Seth: Solid burn line from start to finish.
John: The burn started out relatively straight with a 1-1/2″ ash. Burn was wavy by the halfway point, requiring a touch-up. While puffing, the cigar went out in the last third requiring a re-light.
Jiunn: Perfect burn performance. Even burn, tight ashes, cool burning temperature and slow burn. 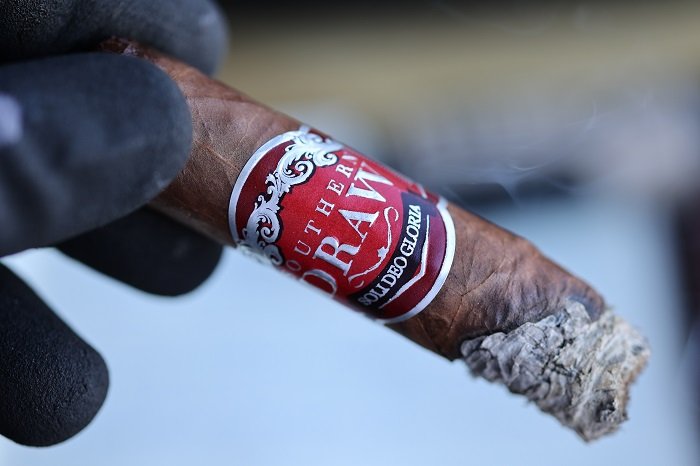 Aaron: The draw was perfect, with just the right amount of resistance that I prefer.
Seth: Nice draw from beginning to end.
John: The draw has some slight resistance to it, roughly 1-1/2 to 2 notches into the resistant spectrum.
Jiunn: The draw was also perfect, giving the best air flow possible.

Aaron: The cigar was pretty basic in it’s flavor profile of cedar, mustiness and black pepper. There was some char to start which lessened into a toasted note, but the char came back pretty heavily in the final third. Once the dry earth joined in the second third, an overall dryness set in. The burn issue isn’t something I typically experience from the brand, so I hope it’s not an issue for this cigar. The Southern Draw Manzanita Toro is a miss for me in the portfolio, and in combination with the interestingly high price point, I don’t really see myself returning to this cigar.
Seth: This Southern Draw Manzanita Toro struggled from the beginning. I did not think the first third was able to establish the cigar before moving into the second and final third, and then when you got to the second third it went downhill quickly. The second and final third were truly painful to smoke. The cigar went sour in the second third and it did not improve at any point to the end. This happened with all the samples. The construction was fine, draw nice too, but this blend was not right. Not worth any price, so even if this were an affordable cigar, I would not smoke just the first third.
John: The Southern Draw Manzanita Toro started out promising in the first third with a dessert like flavor experience. The profile changed significantly moving into the second and last thirds, losing my attention through the review. The draw was very good, with the burn suffering somewhat from a touch-up and re-light. I find almost everything from Southern Draw to be enjoyable for my palate, so I think I will return to the Manzanita in a few months to see if it evolves over time. Total smoking time was 2 hours and 17 minutes.
Jiunn: The Southern Draw Manzanita Toro was a through and through average AJ style cigar for me. Baking spices oriented with leather, construction paper and stale nuts was all she wrote. Typically an AJ style profile like this can be found in the $7 – $8 range. But given this cigar is at a steep $15, I can’t really justify the price for it. As such, I’ll pass on it.