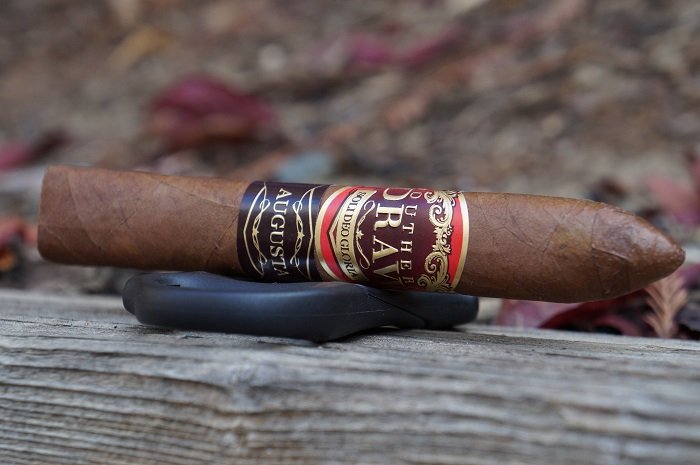 Aaron: The Southern Draw Firethorn Augusta has a soft rectangle press and a wrapper that is medium brown with a few lightly raised veins and a network of fine ones. The seams are smooth in some areas and raised in others while the Belicoso style head is very well finished. The cigar has two bands, with the primary being the traditional design and colors of gold and multiple shades of red and the secondary band carrying the same color combination along with the sub-line name. The aroma from the wrapper is a mix of graham cracker and light hay while the foot brings more graham cracker along with young wood. The pre-light draw brings an airy cedar along with mild spiciness on my lips and tongue.
Seth: Finished with a beautiful Colorado wrapper, the Southern Draw Firethorn Augusta features small veins with the slightest bit of tooth. Great coloring throughout. It is firmly pressed and finished with a lovely tapered head. The cigar sports aromas of warm spices, rich earth, tobacco and nuts.
John: The Southern Draw Firethorn Augusta is a double banded, box pressed Belicoso shaped cigar. The UPC sticker pulls off in one piece as the cellophane is opened. I was able to pick up on aromas of sweet bread, light cedar and mild chocolate from the wrapper. From the foot, plum and hay.
Jiunn: The Southern Draw Firethorn Augusta has a smooth and velvety wrapper to the overall Colorado shade. Veins are well pressed, seams tight and bunch and roll even. Aromas from the wrapper give sea salt and barnyard. Aromas from the foot tell white pepper and dried nuts. Cold draw gives white pepper and sawdust. 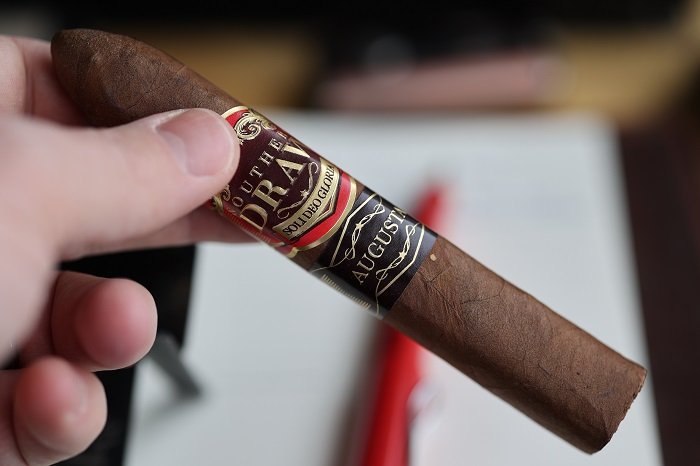 Aaron: The cigar begins with cedar, mustiness and mild cinnamon. The retrohale is an even combination of cedar, mustiness and cinnamon. At an inch in, I begin getting hints of anise. As the third comes to a close, a light meatiness joins in. The strength in this third was slightly below medium.
Seth: The first third opens up by delivering practically no flavors. I am picking up some spice, wood and mineral notes. It is lacking and smoking around a medium level in strength and body.
John: Cedar and mild earth open the retrohale in the first third. Sharp baking spices and pepper take up the post draw. Some mildly dry post draw cedar settles in as the cigar progresses. Creamy citrus is buried under the baking spices on the retophrale. Chocolate joins the retrohale adding richness by the 15 minute mark. Eventually, the post draw pepper and the baking spices on the retrohale recede in intensity to medium minus.
Jiunn: The first third has a toasty and earthy nature. Toasted cedar, dried nuts and leather. Retrohaling gives ramped up nuts and white pepper. The finish consists of a sour citrus rind and leather combination. Strength and body is medium. 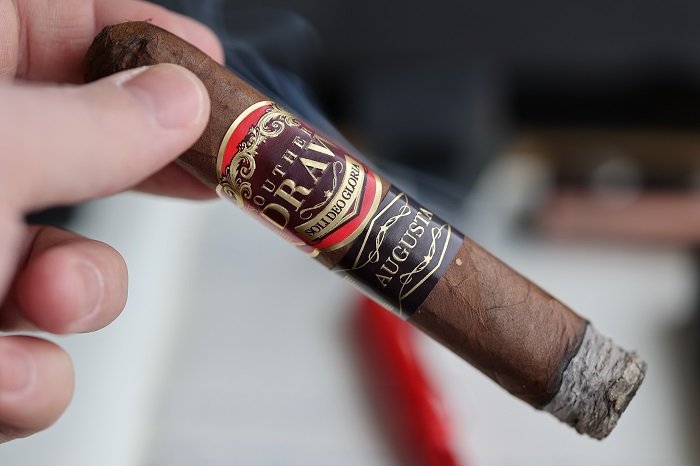 Aaron: As the second third begins, the cedar gains a toast note and is even with the mustiness while the cinnamon, anise and meatiness are all light in the background. At a quarter inch in, the cedar transitions to a general wood note and maintains the toast. At three quarters of an inch in, the anise and cinnamon are gone and the light meatiness is all that remains in the background. The retrohale is musty and toasted wood. At an inch and a quarter, the toasted wood note is weighing heavily on my tongue. As the third comes to a close, the toasted note transitions to a light char. The strength in this third bumped up to medium.
Seth: The second third showed no improvement, but delivered the same lacking flavors. I am picking up spice, mineral and tobacco notes. Like before, medium in strength and body.
John: Chocolate on the retrohale builds in strength going into the second third. Baking spices move to take up the middle of the profile. Bread joins the retrohale as the second third settles in. Citrus from the first third moves into the middle of the profile as the cigar progresses. A musty cedar is detectable on the retrohale as it reaches the halfway point.
Jiunn: The second third is very similar to the first third. The set of flavors is unchanged, but there is more citrus and leather on the finish, which also lengthens it. Other than that, still toasted cedar and dried nuts with those other two flavors. Strength and body are still medium. 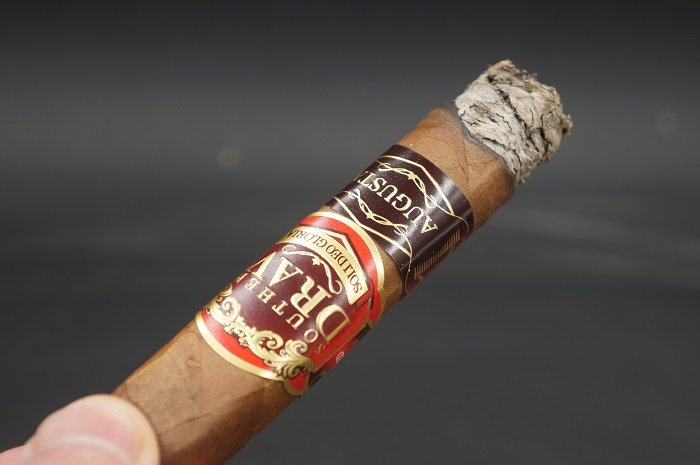 Aaron: As the final third begins, the profile continues with the charred and musty wood with light meatiness. At a quarter inch in, the meatiness drops out as the profile is just lightly charred and musty wood. At three quarters of an inch in, the char begins picking up. The retrohale maintains the toasted and musty wood. The cigar wraps up with charred wood and mustiness. The strength in this third bumped up to slightly above medium.
Seth: The final third delivers a flavor profile of pepper spices, minerals and tar. It is harsh and bitter to the end. In terms of strength and body, the cigar is smoking at a medium level.
John: Bread, citrus and wood take the cigar into the last third. Baking spices return to the retrohale as the last third settles in. Shortly after, tannins move into the post draw. Not long after, a sour citrus also joins the post draw. The post draw continues to evolve with pepper, as the tannins move up to medium or medium plus in intensity.
Jiunn: The final third changes it up such that it’s shifting to a leather and toasted cedar profile, reducing especially the citrus note. The finish also picks up bitter dried nuts. Strength and body finishes the same medium. 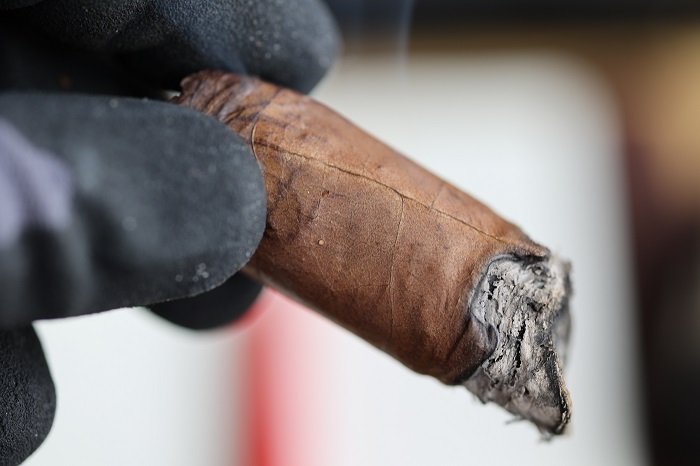 Aaron: The burn was slightly wavy at times, but never needed any attention. The ash held on in one inch increments.
Seth: Very good burn from start to finish.
John: The burn starts out straight, becoming uneven approaching the halfway point of the first third. The burn corrected and continued on straight. The cigar spontaneously went out in the last third, requiring a re-light.
Jiunn: Perfect burn performance. Even burn, solid ashes, ample smoke production and cool burning temperature. 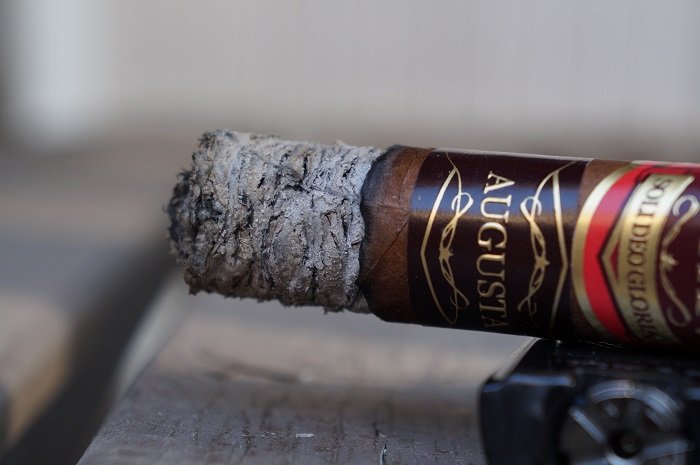 Aaron: The draw was slightly tighter than I prefer, but didn’t cause any issues with the smoking experience.
Seth: Good draw from beginning to end.
John: The draw was perfect, right in the ideal zone of resistant and open.
Jiunn: The draw was also perfect, giving the ideal air flow and resistance.

Aaron: The cigar started well with a nice combination of flavors as well as some subtle complexities in the background, but at the halfway point, those subtleties started dropping out and the cedar became less defined. The final third saw the char pick up into a pretty linear profile. The Firethorn line has been a workhorse for the brand, but I didn’t find that the Southern Draw Firethorn Augusta really stepped up to take it to another level. If you’re a fan of the brand, or the line in general, it’s worth giving this a try to see how it stacks up for you.
Seth: I have never been one to be high on the Firethorn line, and the new Southern Draw Firethorn Augusta vitola continues those thoughts. There was practically no flavor present, and in the end the cigar was simply unpleasant. I often feel that the problem with Southern Draw is that they occasionally release a really enjoyable cigar, but there are some duds with that. You really have to go through them all to find that potential treasure.
John: The Southern Draw Firethorn Augusta was overall an enjoyable cigar, with the tannins in the last third serving as a distraction from an otherwise balanced profile. Construction was good, with one re-light required during the review, and a perfect draw. Like almost everything from Southern Draw, I would smoke another Firethorn Augusta if I saw it on the shelf. Total smoking time was 1 hour and 47 minutes.
Jiunn: In many ways, the Southern Draw Firethorn Augusta tastes like a stereotypical AJ cigar, which is lots of cedar, rich soil earthiness and leather. When I say this, I’m not saying it’s a bad cigar, but one that is very familiar and is all over the marketplace. So if you’re one to be a fan of AJ, you will absolutely enjoy this. For me, it lacked character, and thus was average.