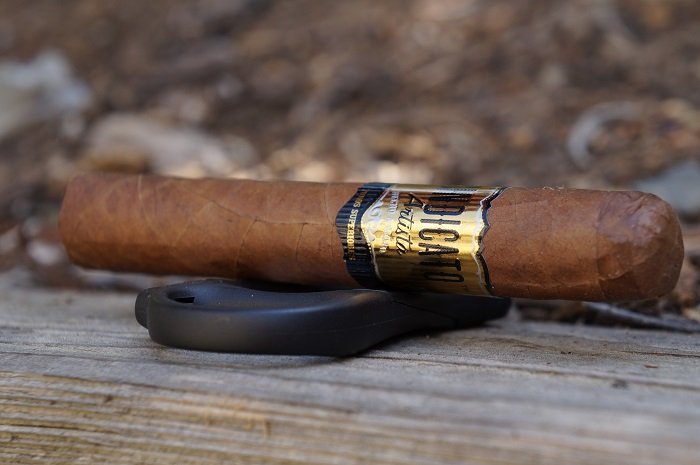 Aaron: The wrapper on the Sindicato Artista Robusto is medium brown, has a network of lightly raised veins and a fine toothiness. The seams are a bit raised and the caps have a few wrinkles. The band is a familiar design for the brand with the gold, black and silver color combination and denotes the brand and line names. The barcode is integrated into the back of the band and denotes the vitola. The aroma from the wrapper is musty wood and light earth, while the foot brings a lightly musty cedar note. The pre-light draw brings cedar and floral sweetness.
Seth: The Sindicato Artista Robusto has this lovely coloring that is between Natural and dark Natural throughout. It is firm in most areas, and there are small to medium sized veins. Nicely applied cap, and a texture that is slightly silky with fine grit. I am getting aromas of sweet spices, earth, hay and honey fruits.
John: The Sindicato Artista Robusto comes in cellophane and does not have a UPC sticker. The cigar is single banded, and has a UPC code integrated into the band, which is well considered. Aromas from the cigar included sweet tobacco and aged wood. From the foot, there was sweet tobacco and mild hay.
Jiunn: The Sindicato Artista Robusto has a dull Colorado wrapper shade. Veins are well pressed, seams tight, bunch and roll even and head well wrapped. Aromas from the wrapper tell of barnyard, hay and cedar. Aromas from the foot give a mixture of sweet toasted nuts and ample black pepper spice. Cold draw reveals lightly toasted nuts. 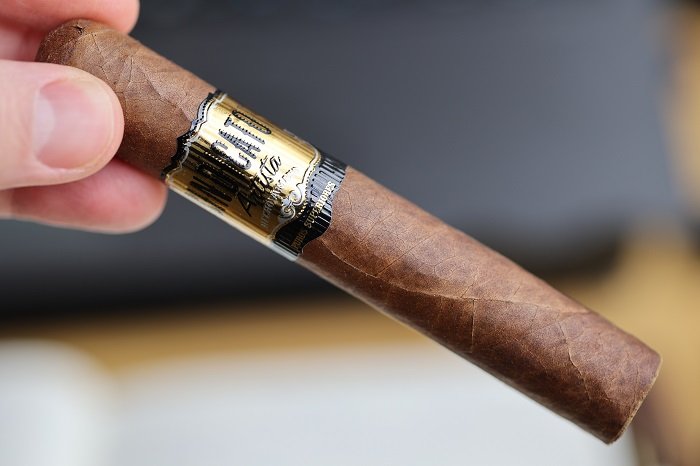 Aaron: The cigar begins with cedar, some sharp black pepper and light mustiness. At a quarter inch in, the sharpness of the black pepper departs. At a half inch in, the cedar and mustiness are now paired up. The retrohale is musty cedar and mild black pepper. At an inch and a quarter, some light, dry earth joins in. As the third comes to a close, the profile is musty cedar up front with black pepper and dry earth a fair bit behind. The strength was slightly below medium.
Seth: The first third has this lovely, sweet spice flavor profile that greets you immediately upon lighting. There are some dry wood notes present as well, and I am getting some honey and hay qualities. Earth and cocoa notes are present as well, and the cigar is smoking around a medium to medium-full level for strength and body. Amazing construction.
John: The first third kicks it off with wood, mild baking spices and sweet dry wood that finishes into the post draw. There are some dark toasted elements developing on the retrohale. Some baked pastry sweetness starts to show up at the end of the draw, and lingers well into the post draw. As the first third settles in, chocolate joins the retrohale. By the halfway point, some sweet wood is the primary flavor on the post draw.
Jiunn: The first third is almost good. Nice and favorable notes of toasted nuts and cedar. But what kills the profile is a long drawn out leather and cedar bitterness. The retrohales help because it doesn’t show the bitterness. Strength and body is medium. 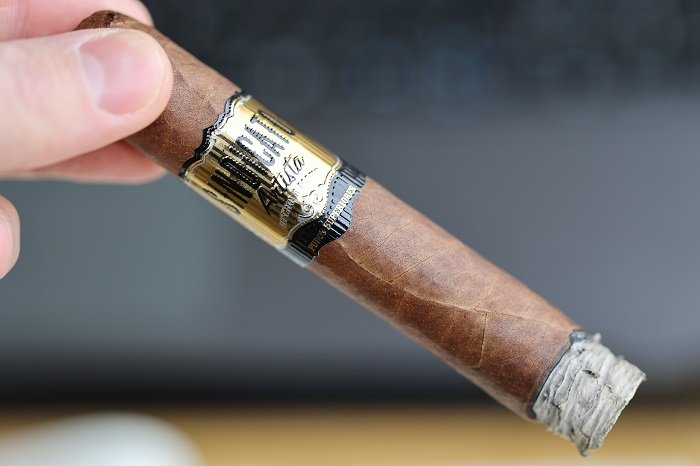 Aaron: As the second third begins, the dry earth picks up a bit. At a quarter inch in, the black pepper is now very faint. The retrohale is now musty cedar and dry earth. As the third comes to a close, the musty cedar is just ahead of the dry earth while a mild black pepper remains in the background. The strength remained at slightly below medium.
Seth: The second third shows a decline from the first third, but I am still picking up some sweet earth, leather and spice notes. Bits of wood present as well, but no honey and hay qualities. Medium-full in strength and body.
John: Chocolate and sweet wood combine into the second third. Some dry wood is present on the post draw as it settles. As the second third progresses, wood also moves into the center of the profile. I didn’t get any more flavor evolution through the second third.
Jiunn: There’s less harshness in the second third, but the dry leather note still puts a damper to the entire profile. It really is too bad that a single note can tip the enjoyment factor of a cigar so much. Strength and body remains medium. 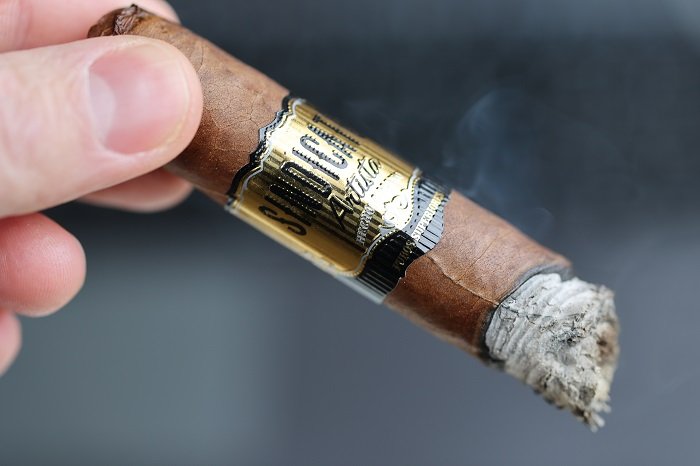 Aaron: As the final third begins, the dry earth is now even with the musty cedar and the overall profile is a bit dry. At a quarter inch in, the cedar gains a heavy toast. At three quarters of an inch in, a charred bitterness becomes present. The retrohale is now heavily toasted cedar and dry earth. As the cigar comes to a close, the profile is musty, heavily toasted cedar and dry earth up front with a charred bitterness right behind and mild black pepper in the background. The strength in this third bumped up to medium.
Seth: The final third delivers a profile of dry earth and wood. Mineral notes present as well, and there is this sharp mineral spice quality. Medium to medium-full in strength and body, this is not anywhere near the first third. Shame.
John: The last third starts with creamy wood and dark tobacco notes. Dry wood finishes each puff and lingers on the post draw. As it settles in, wood again becomes the defining flavor in the center of the profile. Like the second third, there was no more flavor evolution.
Jiunn: The final third is still the same as the second third. Main flavor of leathery tannins with a semi-harsh bite, followed by toasted nuts and cedar. Strength and body finishes the same medium. 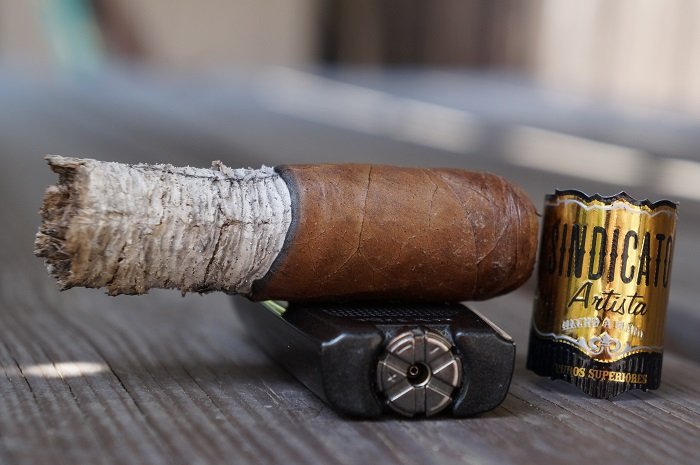 Aaron: The burn line was a bit wavy at times, but never needed any attention. The ash held on in inch and a half increments.
Seth: Burn was great for the first two thirds, and then I had some canoeing in the final third.
John: The burn was straight through the review with an ash that held on well up to 1-1/2 inches at times.
Jiunn: Perfect burn. Even burn, tight ashes, cool burning temperature and good smoke production. 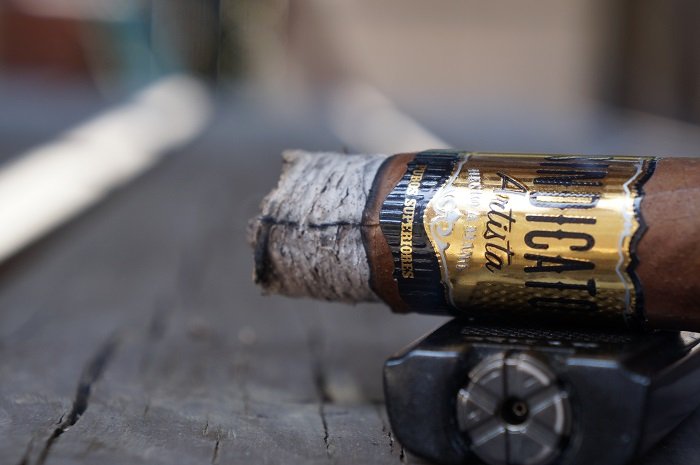 Aaron: The cigar began with cedar, some sharp black pepper and light mustiness. Some dry earth joined a bit later. The final third saw the cedar gain a heavy toast and some charred bitterness joined in a bit later. The Sindicato Artista Robusto had a pretty basic profile through the first two thirds that wasn’t very exciting and finished off with a dry profile that had heavy toast and charred bitterness that wasn’t all that enjoyable. I was interested to see an El Artista offering for another brand, but this just didn’t capture my attention. The price point is attractive, but I just don’t see myself returning to this cigar.
Seth: After the first third, I was saying to myself that Sindicato was not going to get the credit it deserved for this Sindicato Artista Robusto if it continued to smoke in this manner. I was confident the cigar would continue to deliver this enjoyable profile throughout. Honey, hay, cocoa, sweet spices, wood. It had everything going for it. Well, I was wrong. This was a classic example of, “did we only smoke the first third after blending?” The first third delivered lovely flavors that were sweet, spicy and balanced, but as the cigar progressed it became more and more sharp and unpleasant. The burn went from great to a complete disaster. Everything went wrong. Somewhere between Subpar and Average based off where the cigar started to where it finished.
John: The Sindicato Artista Robusto started with some engaging flavors in the first third that came together in an enjoyable way. The second and last thirds were still pleasant, but didn’t seem to get the same depth as the first third. The burn and construction were excellent, which makes sense given that the cigars came out of Tabacalera El Artista. The cigar didn’t wow me, but the price point is fairly attractive so I’d be willing to give it another go to see if another Robusto or even the Toro size had a different result. Total smoking time was a little on the quick side at 1 hour and 36 minutes.
Jiunn: Most reviewed cigars are overall average. But, not every average tells the same story. For the Sindicato Artista Robusto, it almost reaches “good” levels. The leather harsh tannins improve as the cigar burns through the second third and onwards, so with that said, it’s almost a good cigar. And with the attractive $8 price point, it’s that much more appealing. Try a couple.