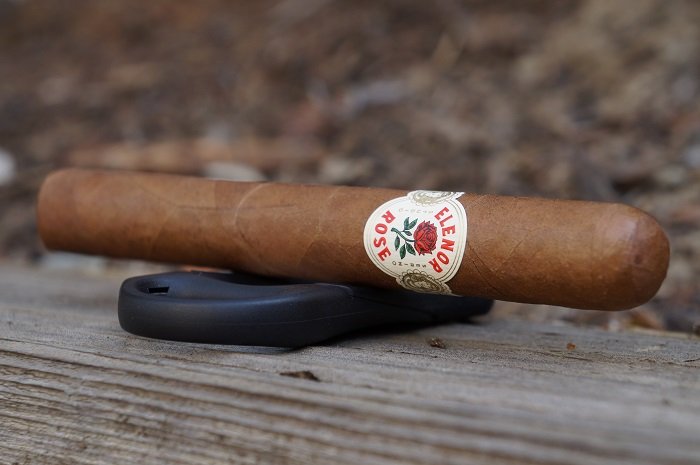 Aaron: The wrapper on the Serino Studio Serino Elenor Rose Lady 48 is light brown and has some raised veins that carry a lighter color to them. The seams are smooth and the caps very well applied. The band is antique white and gold with an image of a rose along with the sub brand and line name on front and company name on back. The aroma from the wrapper is a mix of musty wood and earth while the foot brings more musty wood and graham cracker. The pre-light draw brings cedar and honey like sweetness along with a mild spiciness on my lips.
Seth: The Serino Studio Serino Elenor Rose Lady 48 immediately caught my attention by the aroma on the foot. It has a combination of sweet cherries, rich earth, chocolate cake, aromatic tobacco and charred wood. The cigar has a wrapper that is oily and sports small to medium sized veins. It is firm in hand and has a lovely cap. Nice looking cigar.
John: The Serino Studio Serino Elenor Rose Lady 48 comes in cellophane, and does not have a UPC sticker. The cigar is single banded, and the Lady 48 is a parejo format. Aromas from the cigar included bread, and a sweetness reminiscent of the complexities of a wine barrel. From the foot, there was a dry hay, along with more wine barrel aromas.
Jiunn: The Serino Studio Serino Elenor Rose Lady 48 has a great vintage look, given it’s band and “old school” Colorado wrapper color variation. Veins are well pressed, seams tight, bunch and roll even and head well wrapped. Aromas from the wrapper tell dates and cedar. Aromas from the foot give ample sweet nuttiness and baking spices. Cold draw tell cedar, hay and a hint of persimmons. 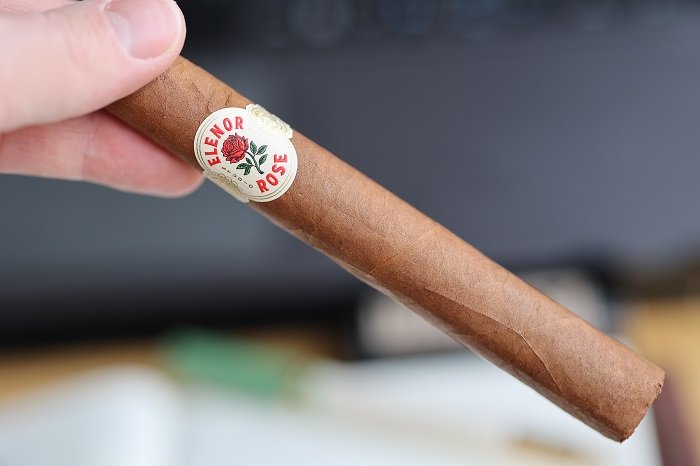 Aaron: The cigar begins with lightly toasted wood, mustiness and light chalkiness. At a half inch in, a light floral note joins. The retrohale is toasted wood up front with mustiness slightly behind. At an inch and a quarter, the chalkiness has become very faint. As the third comes to a close, the profile is toasted wood up front with mustiness a bit behind and light amounts of chalk and floral notes in the background. The strength was slightly below medium.
Seth: The first third begins by delivering hay and earth notes. I am picking up some pepper spice qualities as well, and the finish is that of toasted nuts. Leather bits present as well. Medium in strength and body.
John: The first third opens with bread, baking spices and medium strength wood that carries into the post draw. Some medium earth moves into the center of the profile quickly. As the cigar progresses, pepper developed on the post draw, along with some chocolate on the retrohale. The baking spices continue to evolve up to medium-plus strength. By the 15 minute mark, some light-plus leather is on the post draw. The chocolate moves towards the front of the profile moving to the halfway point. By the bottom half, all the flavor components are balanced in similar strength profiles. Sweet bread leads the retrohale as it progresses into the second third.
Jiunn: The first third shows a relatively complex array of flavors. Toast, cedar, assertive baking spices and a hint of cardboard. Retrohaling ramps up a white pepper spice, along with increased baking spices. The finish sits on the rear palate with lingering cedar and baking spices. Strength and body is medium. 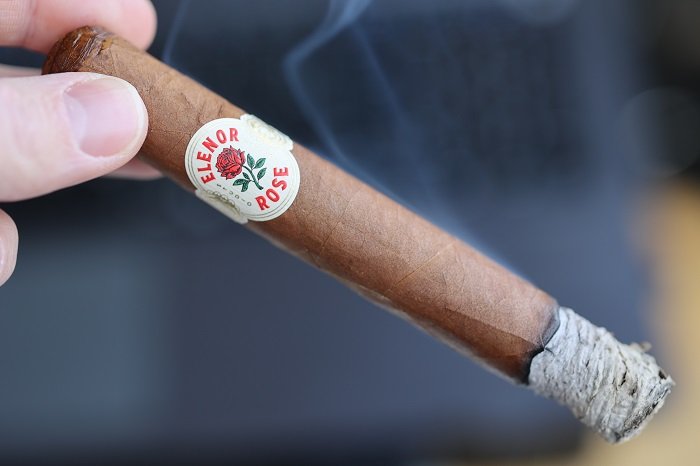 Aaron: As the second third begins, the toasted wood and mustiness are now even. The retrohale is musty, toasted wood and faint chalkiness. As the third comes to a close, the profile is musty, toasted wood up front with light amounts of chalk and floral notes in the background. The strength remains at slightly below medium.
Seth: The second third delivers a flavor profile of leather, nuts, tobacco, earth and dry wood. I am picking up some pepper spices as well, and the cigar has lost some of that softness from the first third. Medium in strength and body.
John: Bread, and mild baking spices lead off here, with earth and wood combining to finish into the post draw. On the post draw, the baking spices suddenly intensify to medium strength. Some mild dry character joins the wood on the post draw as it settled in. As the cigar progresses, earth and some mustiness, along with mild tannins take up the middle of the profile. There’s a mild burning paper like background note. By the bottom half of the second third, dryness is at the front of the post draw.
Jiunn: The second third creates a staleness off the baking spices and cardboard. The staleness is most realized on the drawn out finish. The other flavors are still there though, just less obvious. Strength and body continues to be medium. 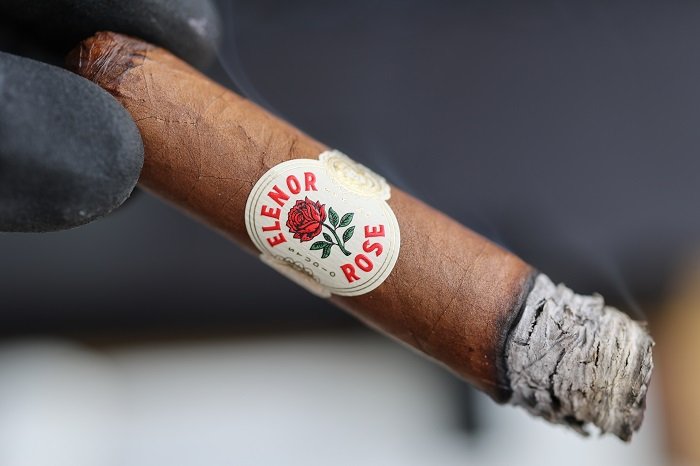 Aaron: As the final third begins, some dry earth joins the profile and is right behind the musty, toasted wood. The retrohale is now musty, toasted wood, with dry earth right behind and faint chalkiness. At a half inch in, the toast level increases. At an inch in, the cigar warms up a bit and brings a mintiness to the profile. As the cigar comes to a close, the profile is musty, heavily toasted wood with dry earth right behind and some chalk, minty and floral notes in the background. The strength bumped up to medium.
Seth: The final third delivered mineral and earth notes. Lacking and unpleasant. Medium in strength and body.
John: Cardboard, wood and hay are the initial flavor impressions as some bitterness and dry wood move into the post draw. As the last third settles in, baking spices return to the retrohale, pushing back against the bitterness. By the halfway point, the cigar is wood forward.
Jiunn: The final third shows no changes. Still quite stale with baking spices and cardboard leading the pack. Strength is trying to tick up to medium-full, but overall, it’s still medium strength and body. 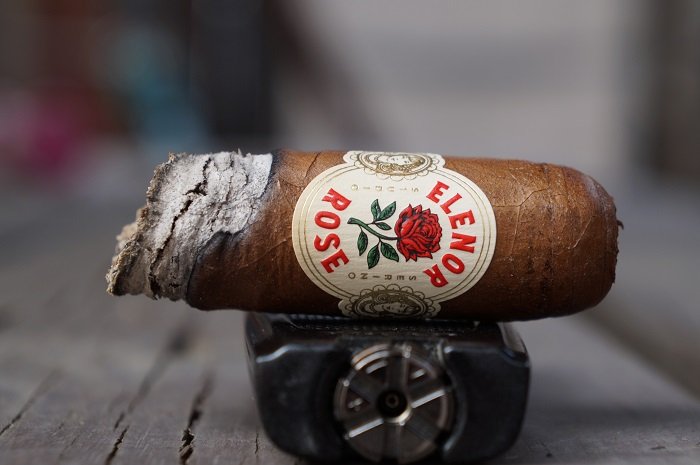 Aaron: The burn was a bit wavy at times and went out once, requiring a re-light. The ash held on in inch and a quarter increments and was a bit flaky.
Seth: Nice burn line from start to finish.
John: The burn was uneven in the first third, correcting itself without intervention. The cigar went out in the second third, requiring a re-light. The cigar went out in the last third, requiring another re-light. Ash held on well, up to one inch increments, with some minor flakiness to it.
Jiunn: Perfect burn performance. Even burn, tight ashes, cool burning temperature and good smoke production. 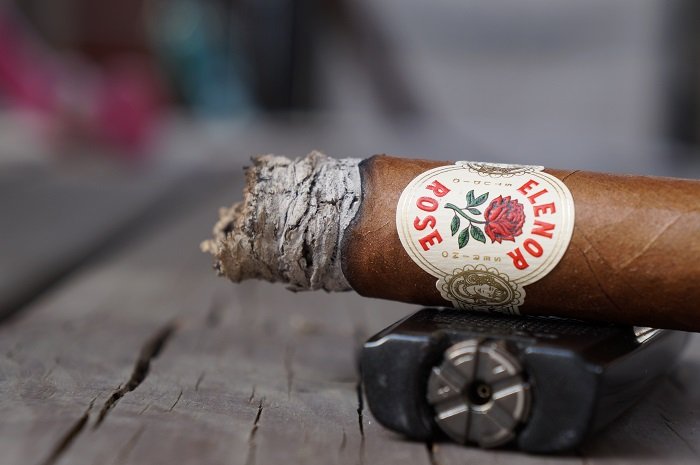 Aaron: The draw was slightly tighter than I prefer, but didn’t cause any issues with the smoking experience.
Seth: Great draw throughout.
John: The draw was at most a 1/2 notch towards the resistant spectrum, which put it in the ideal zone for draw.
Jiunn: The draw was also spot on, giving the ideal air flow and resistance.

Aaron: The cigar began with lightly toasted wood, mustiness and light chalkiness. A floral note joined a bit later. The final third saw some dry earth join, the toast level increased and some mintiness came in as the cigar heated up. The Serino Studio Serino Elenor Rose Lady 48 started well with the nuanced floral note providing a nice touch, The second third dropped down a level as the floral note was very faint and maintained that level the rest of the way. Overall, the cigar was OK, The price point is attractive and the cigar is worth a try. I might come back to it from time to time, but it wouldn’t be something I return to all that often.
Seth: I may be writing the words of a sermon that no one will hear, but I will continue. I was disappointed in the Serino Studio Serino Elenor Rose Lady 48. The aroma on the cigar was fantastic, and it was beautiful in its simplicity, but the actual flavors while smoking never took off. For two thirds, the cigar delivered a profile of earth, nuts and leather, and in the end, it was just mineral and earth notes. It never got above medium in strength or body, but that made no difference. Disappointing. I was hoping for more out of the cigar based off the appearance and aroma, but what does she care?
John: The Serino Studio Serino Elenor Rose Lady 48 started out interesting with some dessert like flavors and baking spices that became intense, but found its overall balance. The second and last thirds were pleasant but fairly linear, lacking the complexity delivered in the first third. The draw was perfect, but the cigar went out twice requiring two re-lights. I can’t help but wonder if the re-lights impacted the flavor performance. The price point on the Lady 48 is fairly reasonable, so I may end up revisiting this again in the near future to see if another cigar burns more consistently and if it impacted the flavor. Total smoking time was 1 hour and 59 minutes.
Jiunn: The Serino Studio Serino Elenor Rose Lady 48 is a great vintage looking cigar but the flavors did not deliver. Past the initial third, it was all about staleness in baking spices and cardboard. This is what ultimately made it an “average” experience. The profile definitely needed flavors to make it more vibrant and/or sweeter. This size is just not my jam.