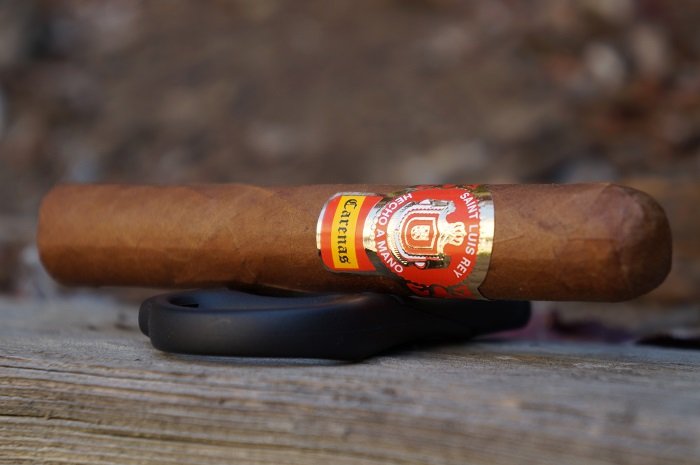 Aaron: The wrapper on the Saint Luis Rey Carenas Robusto is light brown and has a couple of decently raised veins present. The seams are fairly smooth and the caps are decently applied. The band is primarily red and silverish-gold and denotes the brand and line. The aroma from the wrapper is sweet, slightly dry hay while the foot brings bread, wood and stone fruit sweetness. The pre-light draw brings a mix of bread and cedar along with a mild spiciness on my lips.
Seth: The Saint Luis Rey Carenas Robusto has a wrapper that is oily and toothy. There are small veins present throughout, and the cigar is firm in texture. The colors are that of a classic Natural Colorado wrapper, and there are light brown and red earth notes throughout. Aromas of raisins, earth, spices and tobacco on foot. Lovely.
John: The Saint Luis Rey Carenas Robusto comes in cellophane, with a UPC sticker that tears in half when the cello is opened. The cigar features a single band. My initial impressions were that this cigar might have been infused, or at last sat in a humidor or aging room with infused cigars. There were faint notes of artificial vanilla, with a creamy wood underneath. I picked up the same aromas from the foot.
Jiunn: The Saint Luis Rey Carenas Robusto has a gorgeous spot on caramel wrapper shade. Veins are well pressed, seams tight, bunch and roll even and head well wrapped. Aromas from the wrapper gives hay, cedar and barnyard. Aromas from the foot tell sweet prunes and white pepper. Cold draw reveals prunes and cherries. 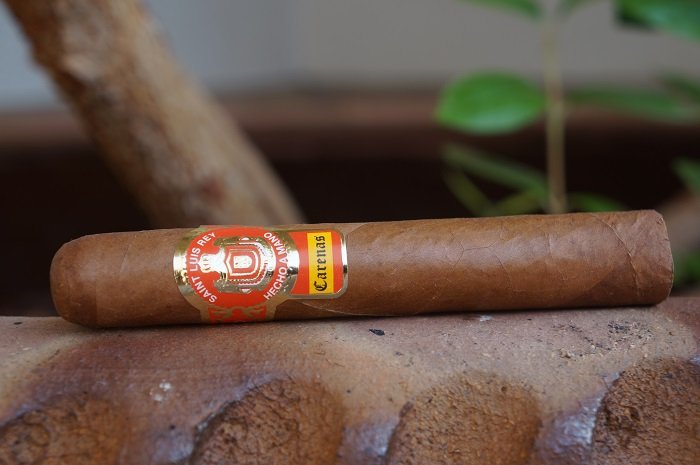 Aaron: The cigar begins with musty, toasted oak and baking spice. At a half inch in, the baking spice transitions to black pepper. The retrohale is toasted oak and black pepper. At an inch in, a light, dry earth joins the profile. At an inch and a quarter, the toast level has already become pretty heavy. The strength in this third was slightly above medium.
Seth: The first third opens with some salted dark chocolate flavors that are paired with cedar, black pepper, cream and nuts. There are some herbal and leather qualities present as well, and it is very enjoyable. Medium-full in strength and body.
John: Sweet wood opens the first third, finishing with dry hay. Some intense white pepper comes through after a few puffs, at medium-full intensity. That pepper lingers for a while through each draw. Some vanilla like sweetness develops, but it’s subtle. Dry wood settles on the post draw as the first third progresses. The flavors start to harmonize by the one inch mark. Cocoa takes up the center of the profile in the bottom half. Some cinnamon joins not long after.
Jiunn: The first third shows mainly ample toasted qualities. Toasted cedar, chestnuts and bread. The toasted wood is especially prevalent on the finish, making it drawn out, but mild with a hint of bitterness. Retrohaling gives a surprising amount of punchy white pepper coming through. Strength and body is medium. 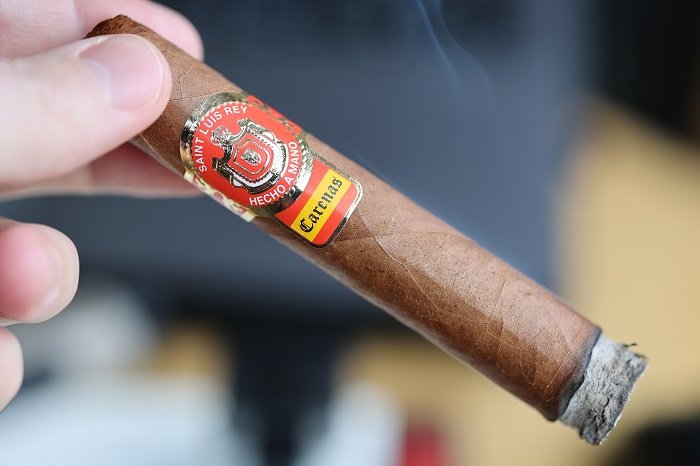 Aaron: As the second third begins, it continues with the musty, heavily toasted oak up front with dry earth right behind and the black pepper right behind it. The retrohale is now musty, toasted oak and dry earth. At an inch in, the black pepper has become very mellow. As the third comes to a close, the profile is musty, toasted oak with dry earth right behind and very mellow black pepper in the background. The strength remained at slightly above medium.
Seth: The second third delivered a more natural flavor profile, and I am picking up salted wood, nuts, leather, hay, herbal and floral qualities. The spice is present as well and it is sharper overall. In terms of strength and body, I would classify the cigar as medium-full.
John: My first few puffs bring flavors of cinnamon, wood and a general creaminess. The wood moves to the front of the profile as the second third progresses. Some tannins join with the wood into the post draw. No other transitions through the second third.
Jiunn: The second third shifts the profile from being toasty to mineral driven. The minerals have a tinny/shiny backbone to it. The finishes wood bitterness is also now combined with the tinny minerals. Strength ramps up to medium-full, while body stays medium. 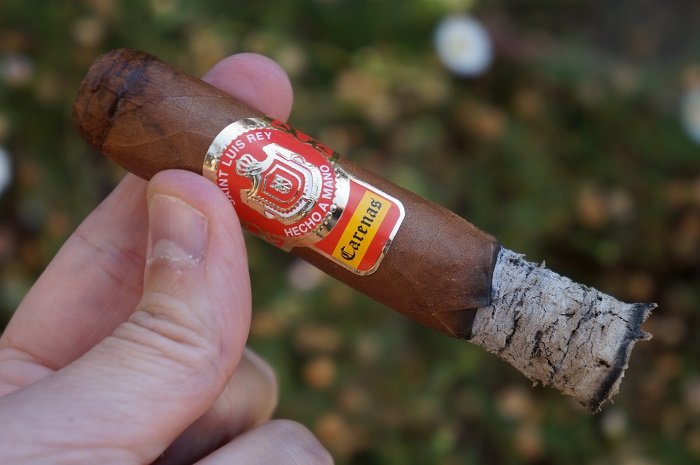 Aaron: As the final third begins, the toast level goes to the heavy side again. The retrohale remains musty, toasted oak and dry earth. At three quarters of an inch in, the heavy toast transitions to char and a light bitterness has joined the profile. The cigar wraps up with musty, charred oak with dry earth right behind and some bitterness in the background. The strength remained at slightly above medium.
Seth: The final third was right in line with the first and second third. I was getting great cedar flavor and they were paired with cream, floral and herbal qualities. There were some faint earth notes on the finish, and it continued to show that spice profile as well. Like before, medium-full in strength and body.
John: Cream and cedar take the Saint Luis Rey Carenas into the final third. Mild, dry wood starts to develop on the post draw. The profile is primarily wood focused through the remainder of the cigar.
Jiunn: Nothing new to note for the final third. Still quite a bit of minerals to the profile along with cedar bitterness. Strength and body finishes the same medium-full and medium. 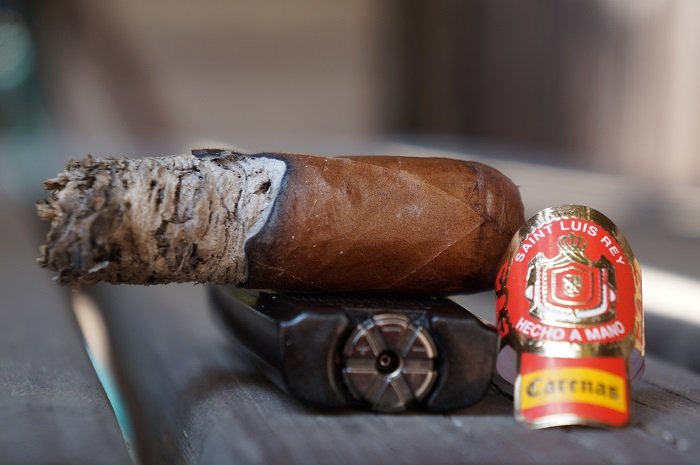 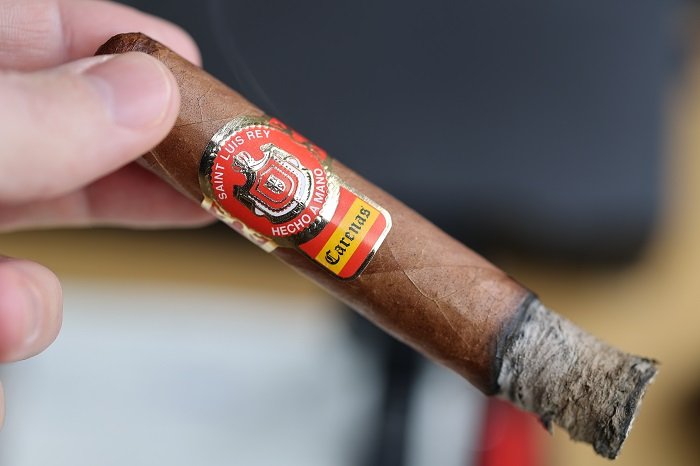 Aaron: The flavor profile was focused around musty, toasted oak, dry earth and black pepper through the first two thirds. The final third fell off a bit as the toast transitioned to char and had some bitterness. Overall, the Saint Luis Rey Carenas Robusto was fairly average as the profile was a bit dry. It also finished on a down note as the char and bitterness were not all that appealing. The cigar has an attractive price point, so it’s an easy cigar to try, but I just didn’t find it all that enjoyable and don’t see myself coming back to it.
Seth: The Saint Luis Rey Carenas Robusto was not a bad cigar. It is a decent blend for most of the cigar. I thought it had great construction and the strength and body were nice as well. The final third really was a low point for the blend, and in the end, it really hurt the cigar. First two thirds were enjoyable however, and I enjoyed the salted dark chocolate flavors in the first third. Not something I would come back to, or something I would recommend. However, that is not something I have to worry about. When do you hear anyone talk about Saint Luis Rey, and when do you ever see Saint Luis Rey? I don’t even talk about Saint Luis Rey when I talk about Habanos anymore.
John: The first third of the Saint Luis Rey Carenas Robusto started out promising, with some flavors that became balanced about halfway through. The second and final thirds were quite linear, not offering up much in the way of complexity to keep me engaged. The burn was flawless and the draw had only a minor amount of resistance to it. Given that the price point on the Carenas Robusto is fairly average for the marketplace, there isn’t much about the flavor delivery that would interest me in coming back. Total smoking time was 1 hour and 40 minutes exactly.
Jiunn: I wish the pre-light experience carried forth on the smoking experience. Wishful thinking I know, as I’ve never had that. In terms of the smoking experience, the Saint Luis Rey Carenas Robusto lacked complexities. The main component lacking was sweetness. It was too toasted wood and tinny mineral. The entire time I was thinking, if there was some sweetness or some fruit tones, it would greatly help the flavor profile. This is a pass for me.