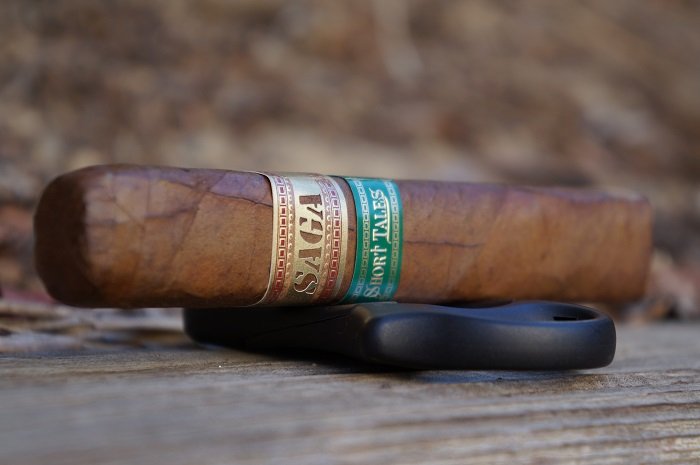 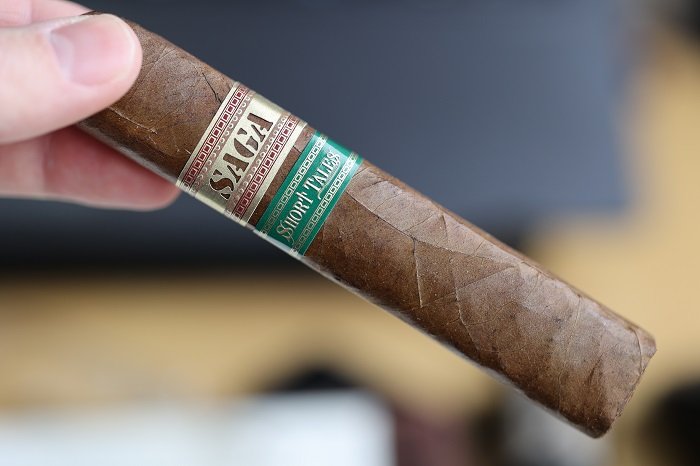 Aaron: The cigar begins with dry, musty cedar. At a half inch in, the cedar gains a light toastiness and some light black pepper joins as well. The retrohale is musty and lightly toasted cedar. As the third comes to a close, the profile is musty, toasted cedar and light black pepper. The strength in this third was slightly below medium.
Seth: The first third starts off by delivering dry peppery spice notes. I am getting dry wood and earth as well, and there are faint nut and leather qualities on the finish. Medium-full in strength and body.
John: The first third opens with chocolate, musty baking spices, and finishes with musty wood. Some cocoa and musty wood combine on the retrohale. As the cigar progresses, light citrus sweetness moves into the center of the profile. By the end of the first, hay has moved into the center of the profile as well.
Jiunn: The first third tastes balanced and keys in on what is needed. It’s sweet, peppery, earthy and spicy. Through retrohaling, it’s that much spicier but also gives a nice nutty sweetness. The finish is on the drier side, with long and lingering dry red pepper spice on the tongue. Strength and body is medium. 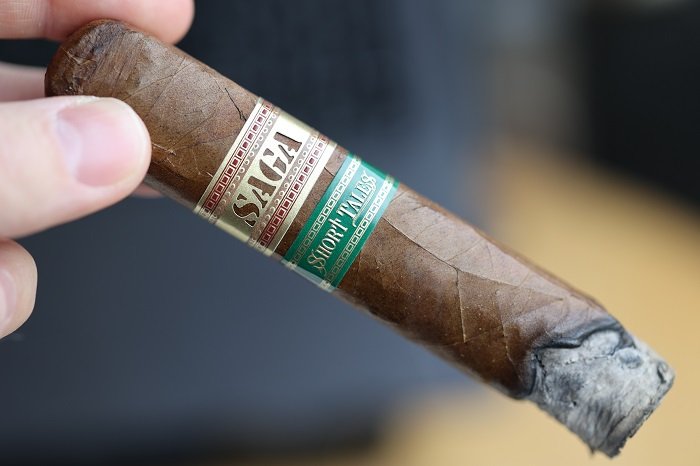 Aaron: As the second third begins, the dryness of the toasted cedar emerges again. At a half inch in, a light vegetal note joins the profile. The retrohale remains musty and toasted cedar. As the third comes to a close, the profile is musty, toasted cedar with light black pepper and vegetal notes. The strength remained at slightly below medium.
Seth: The second third is right in line with the first third. Very consistent. Honestly, I thought I forgot to write my notes from the first third. Dry leather, wood, earth and peppery spice. Medium-full in strength and body.
John: Chocolate, cedar and hay move the cigar into the second third. Hay and cedar take up the middle of the profile right at the start. The profile becomes largely cedar and hay forward through the second third, without more evolution.
Jiunn: The second third is still hitting all the right spots but there is an overcast of leather and bitterness. The only part in which it does not show up is on the retrohale. It’s long and lingering in basically all the wrong ways. Strength and body continues to be medium. 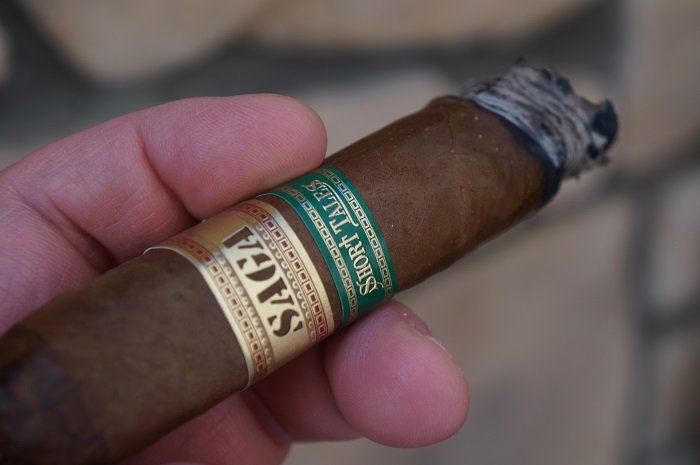 Aaron: As the final third begins, the toast level increases. The retrohale is now musty, toasted cedar and vegetal notes. At a half inch in, the cedar takes on a young, green note to it. The cigar wraps up with a musty, toasted young cedar with light black pepper and vegetal notes. The strength in this third bumped up to medium.
Seth: The final third delivered some of those qualities from the first and second third, but there was this harsh mineral quality present as well. Dry minerals, wood, leather and earth. Medium-full in strength and body.
John: The last third gets things going with mild chocolate with a combination of tannic hay and wood to finish into the post draw. Sharp wood sits near the front of my tongue as I get a few puffs in. Some dark earth moves into the center of the profile as it progresses. That dark earth intensifies to lead the profile along with some wood accents.
Jiunn: The final third shows no changes from the second third. While the flavors are still sweet, spicy and earthy, the leather and bitterness is playing too much of a role. Compound this by a much drier finish, the profile is lacking in enjoyment. Strength and body finishes the same medium. 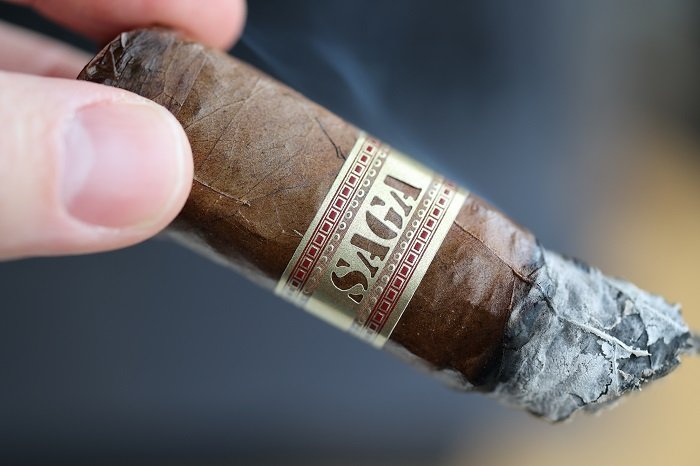 Aaron: The burn was not good as the cigar required two re-lights and two touch-ups. For the re-lights and touch-ups, the wrapper and binder were not burning at the same rate as the filler as large tunneling was happening each time. I also was never fully confident the cigar was fully lit as most of the time low smoke production was being produced and multiple, rapid draws were needed to get a normal amount of smoke production.
Seth: Burn was not great throughout. Shocking.
John: The burn was near flawless, with a straight burn to start becoming uneven through the first third. The cigar was uneven in the second third, eventually requiring a touch-up.
Jiunn: The burn had it’s decent share of issues. Multiple touch-ups and three re-lights. 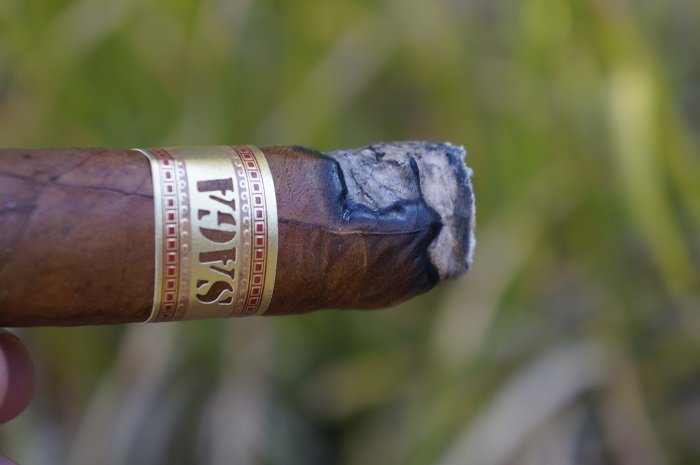 Aaron: The draw was perfect, with just the right amount of resistance that I prefer.
Seth: Nice draw.
John: The draw is perfect, right in the ideal zone between resistant and open.
Jiunn: The draw was a bit too loose. But not so loose that the cigar ever burned hot.

Aaron: The flavor profile was pretty simple, focused around musty, toasted cedar, black pepper and vegetal notes. The burn was a big issue. I’m not sure if the tobacco in the cigar is too young or what the issue was, but the filler burned much faster than the wrapper and binder. I’m sure the experience I had is not what was intended for the Saga Short Tales Tomo VII Tales of the Land: Navarrete. I’d be willing to revisit this cigar a fair amount of time down the road to see if these issues resolve themselves, but I’m not sure if that will occur with the cigar already being rolled and maybe needs more time pre-production. I can’t recommend this cigar as it stands right now.
Seth: I truly feel that the Saga Short Tales Tomo VII Tales of the Land: Navarrete falls between Average and Subpar. I flipped a coin to determine my overall experience. I also blame the wrapper for this cigar. Call me crazy, but I think the Nicaraguan Habano wrapper brings the blend down. Dry and harsh flavor profile. Sometimes you get blends like these out of the Dominican Republic, and these are the blends that smokers end up complaining about and referencing. These are the cigars that make guys “not like Dominican cigars.”
John: The Saga Short Tales Tomo VII Tales of the Land: Navarrete started out with some interesting flavor combinations, and lost much of the complexity by the second third. I did find the second and last thirds to be pleasant, albeit not overly complex. Construction was nearly perfect, with an ideal draw and only a touch-up on the burn. Given the price point to flavor delivery here, I’d be hesitant to return to this cigar as it didn’t offer quite enough to keep me interested. Total smoking time was a somewhat rapid 1 hour and 37 minutes.
Jiunn: A strong start for the first third, led by a subsequent mediocre remaining two thirds. I never minded the lackluster burn performance. If a cigar is tasty throughout the entire smoking experience, I don’t mind a terrible burn. Unfortunately, the final two third’s leather and bitterness played a major role in the enjoyment factor. Give me the first third consistently, and you got yourself a winner in the Saga Short Tales Tomo VII Tales of the Land: Navarrete.