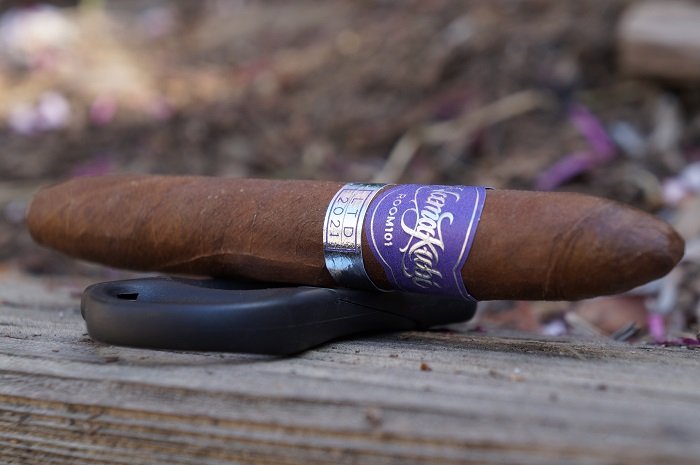 Aaron: The Room101 Namakubi Ranfla is wrapped in white tissue paper which is covered by a purple paper sleeve that has silver Japanese characters on it. After removing the sleeve and tissue paper, a perfecto shaped cigar is revealed that has a medium brown wrapper with some raised veins and some wrinkles. The seams are smooth and the head is finished well. There are two bands, with the primary being purple with silver and denoting the line and brand. The secondary band is silver and purple and denotes the year and that it is a limited release. The aroma from the wrapper is sweet cedar and light hay while the foot just brings a light cedar note. The pre-light draw brings a sweet and slightly musty, aged cedar along with a mild spice on my lips.
Seth: The presentation overall is amazing. The packaging, vitola, wrapper, aromas, it’s just all amazing! The Room101 Namakubi Ranfla itself has a toothy wrapper with small veins throughout. It has this Natural and Maduro coloring. Classic dark brown. Beautiful figurado that is firm throughout. Cold draw of cedar, spices and tobacco with aromas of tobacco and leather.
John: The Room101 Namakubi Ranfla comes in a silver and blue tissue wrapper. Underneath, the cigar is double banded with a silver ‘LTD 2021’ secondary band. Aromas from the cigar included rooibos notes, mild wood and earth. There was mild hay and wood from the foot.
Jiunn: The Room101 Namakubi Ranfla has a rich dark cocoa Colorado Maduro wrapper shade. Veins are well pressed, seams tight, bunch and roll even and head well wrapped. Aromas from the wrapper tell hay, barnyard and floral perfume. Aromas from the foot give toasted almonds. Cold draw brings cedar shavings, hay and packaged noodles. 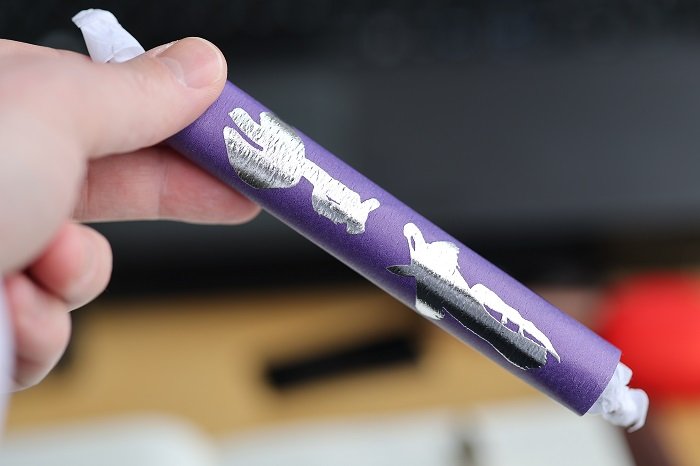 Aaron: The cigar begins with toasted cedar and mild black pepper. At a half inch in, some mushroom mustiness joins in. The retrohale is musty, toasted cedar with a mid-level pepper zing. At an inch in, some dry earth joins the profile and the overall profile is now a bit dry. As the third comes to a close, the profile is toasted cedar and mushroom mustiness even up front, dry earth a bit behind and mild black pepper in the background. The strength was slightly below medium.
Seth: The first third starts out by delivering solid tobacco, hay and wood notes. It’s a dryer profile, there is some leather, and the wood has these wood shaving qualities. There are some pepper notes present, white pepper, but it is not over the top and it is followed by this subtle natural sweetness. Sweet orange and citrus quality as well. Balanced cigar. Medium in strength and body. Maybe medium to medium-full.
John: My initial flavor impressions are baking spices, sweetness and wood as the baking spices linger into the post draw at medium strength. Some chocolate breaks through the middle of the retrohale as it progresses. Some light plus vegetal notes come through the retrohale some time later. By the halfway point, I’m also picking up on a light-plus mustiness that comes through at the end of the draw.
Jiunn: The first thirds main component is cedar. Surrounding the cedar is a subtle maple syrup sweetness and toasted nuts. Retrohaling introduces black pepper spice and increased cedar wood. The finish is clean, with cedar and hay. Strength and body is medium. 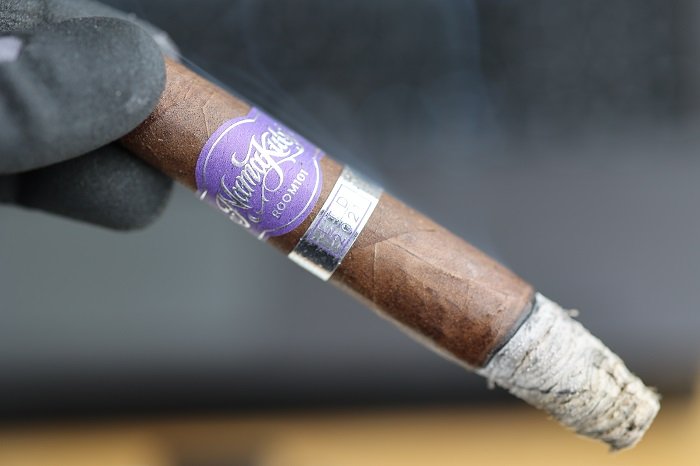 Aaron: As the second third begins, the earth lightens in fullness, but the overall dryness remains as the toasted cedar is now carrying a dryness. At a quarter inch in, the mushroom part of the mustiness is gone as a light floral note joins in. The retrohale is musty, toasted cedar with a light floral note. As the third wraps up, the profile is musty toasted cedar up front, dry earth on the back half of the middle and floral and black pepper in the background. The strength bumped up to medium.
Seth: The second third delivers a flavor profile that has a nice dry pepper spice and is paired with leather, cedar and cocoa/earth qualities. I am getting some faint cream and citrus notes as well. Strength and body have dropped, and it is more around medium now.
John: Baking spices and mustiness combine along with a vegetal note to lead off the second third, with the baking spices still lingering through the post draw. Bread comes through the retrohale as it progresses.
Jiunn: The second third is still cedar centric, but cuts out the majority of the maple syrup sweetness. The aspects of the retrohale and finish are unchanged from the first third. Strength and body remains medium. 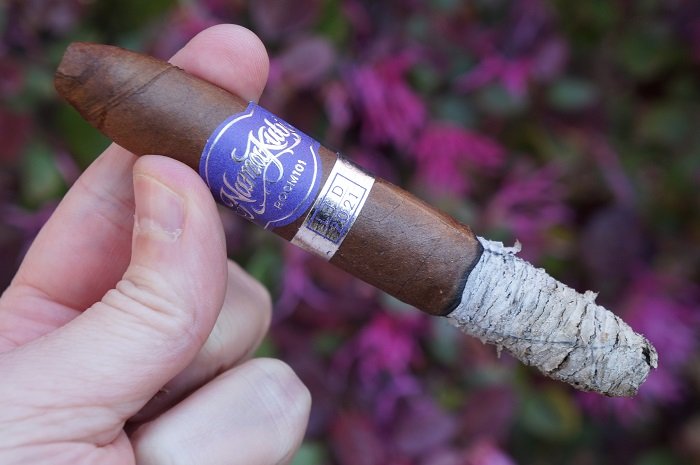 Aaron: As the final third begins, the toast level picks up a bit. The retrohale is now musty, toasted cedar and dry earth. At a half inch in, the dry earth picks up in fullness. As the cigar wraps up, the musty, toasted cedar is just ahead of the dry earth while the floral and black pepper notes remain in the background. The strength remained at medium.
Seth: The final third is fairly in line with the second third. I am picking up more pepper spice qualities now, and it has that leather, wood and earth profile as well. Some dough and cocoa notes also. Lemon peel quality on the finish. Medium in strength and body.
John: Wood and baking spices lead off here as dry, tannic wood lingers into the post draw at medium-minus strength. Some light-plus wood is present in the center of the profile. As it progresses, a vegetal note returns near the end of the draw. By the halfway point, some earth combines with wood into the center of the profile.
Jiunn: The final third shows no changes. Still quite a bit of cedar and toasted nuts. Still no changes to the retrohale and finish. Strength and body finishes the same medium. 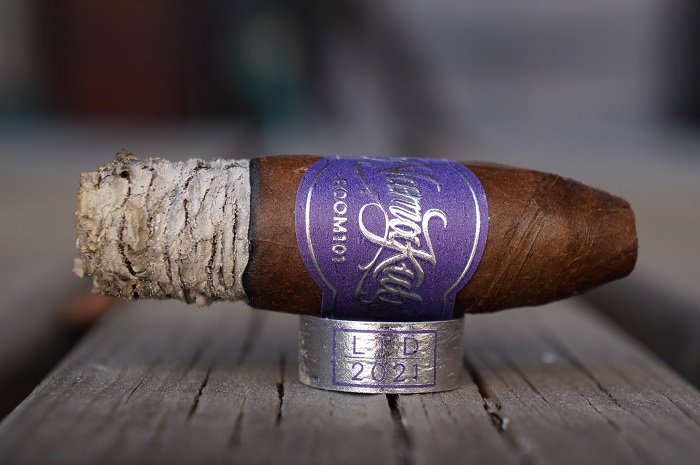 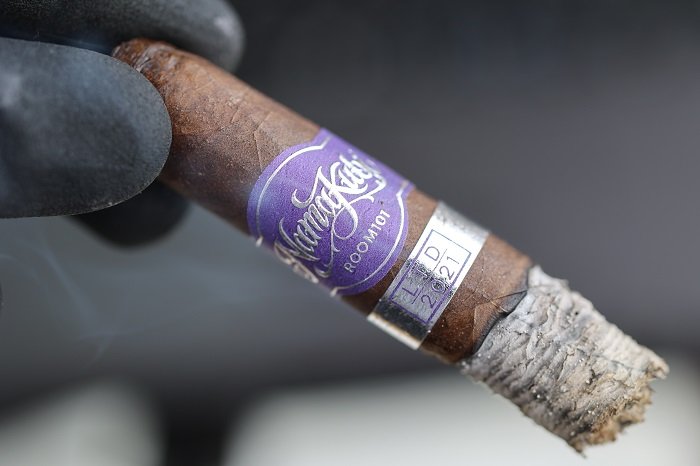 Aaron: The cigar began with toasted cedar and mild black pepper. Some mushroom mustiness joined in fairly quickly and some dry earth a bit later. The second third saw the mushroom portion of the mustiness drop out and a floral note join in. The final third saw the toast and dry earth levels increase. Construction was absolutely perfect. The Room101 Namakubi Ranfla started well, but by the second third, the overall dryness became a detractor and maintained an average profile through the last two thirds. If the dryness could be blended out, we’d be talking about a pretty good cigar. I know a portion of the cost of this cigar goes to a good cause which is fantastic, but the overall price point, in my opinion, doesn’t match with the experience. Based on the price and overall flavor experience, likely not something I’d return to.
Seth: I really enjoyed the Room101 Namakubi Ranfla. I thought Booth did a great job of capturing what the Namakubi was, while at the same time delivering the quality that you get with the new Room101 blends out of Tabacalera William Ventura. It smoked like any good Room101 blend has for 11 years. Packaging is just amazing as well. It didn’t have that strong Honduran profile as the old Room101 Namakubi, but it still has that Room101 farm like funk flavor. Citrus, creamy, wood, leather and pepper.
John: The Room101 Namakubi Ranfla had an interesting combination of flavors through the first third, but the complexity just wasn’t there in the same way for the second third. By the last third, the profile was largely wood forward. The draw was perfect, and the burn was perfect. The Room101 Namakubi Ranfla was okay, but the price tag means I am not likely to take a second pass at it. Total smoking time was 1 hour and 41 minutes.
Jiunn: Mark the Room101 Namakubi Ranfla as yet another failed attempt at an expensive, limited edition. Cigars like this makes me contemplate the question of what makes it a worthwhile limited edition cigar? For me, it no doubt needs to technically perform flawlessly (in which this cigar did). But for $25, it needs to taste much better than the core offerings, which this cigar failed at. And that’s why it was ultimately an average experience.