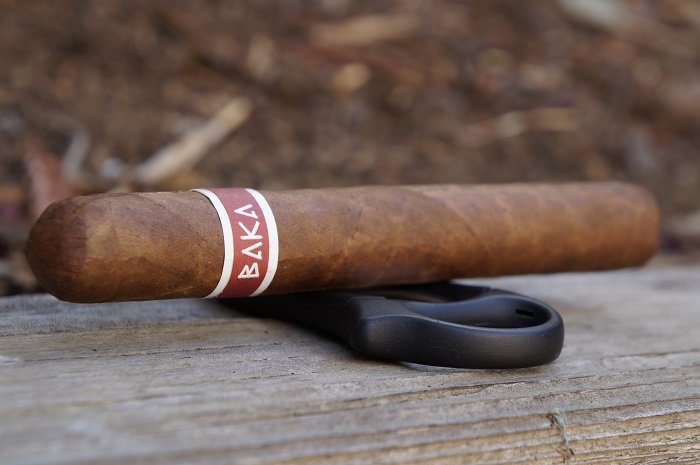 Aaron: The wrapper on the RoMa Craft Baka Hunter Gatherer is light brown with a lighter shade surrounding the slightly raised veins, giving it a turtle shell effect. The seams are slightly raised and the caps well applied. The band is Oklahoma red with the line name, over a slightly taller white band. The aroma from the wrapper is sweet cedar and earth while the foot brings a mix of wood and breadiness. The pre-light draw brings a lightly sweet and airy cedar.
Seth: This is a great looking Cameroon wrapper, but not a beautiful wrapper. Toothy with medium sized veins throughout, the RoMa Craft Baka Hunter Gatherer has a nice classic natural brown coloring. Very light roast coffee bean vibe. There are some water marks here and there, and it is toothy in texture. I would say it is Natural-Maduro in coloring. Aromas of raisins, stone fruit, leather, tobacco, rich earth and spices.
John: The RoMa Craft Baka Hunter Gatherer comes in cellophane and has a UPC sticker that tears in half when the cellophane is opened. The cigar is technically double banded, with the white on brown Baka band over top of the white band of a Texas star underneath. Aromas from the wrapper included sweet bread, wood and mild hay. From the foot, the only other distinct note was sweet hay. 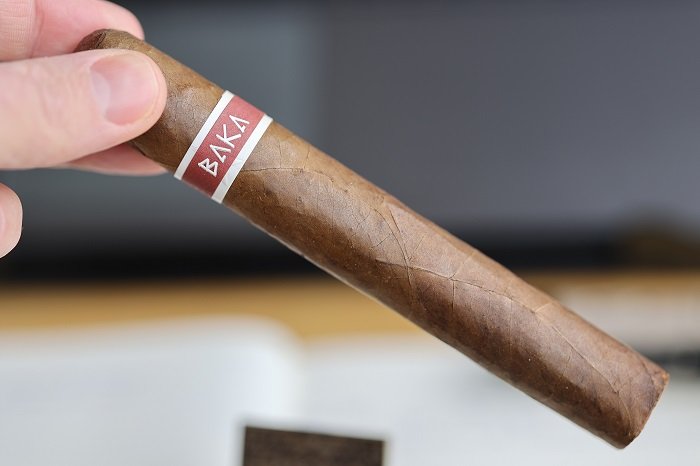 Aaron: The cigar begins with toasted cedar, black pepper and mild creaminess. At a half inch in, the creaminess and black pepper are working well together. The retrohale is toasted cedar with a bit of a black pepper zing. At an inch and a quarter, some dry earth joins the profile. A quarter inch later, the pepper picks up in fullness. As the third comes to a close, the toasted cedar is slightly ahead of the black pepper and earth with a light creaminess in the background. The strength in this third was slightly above medium.
Seth: The first third starts by delivering spice notes that are showing bits of cloves, anise, cinnamon and pepper. There are some faint currant qualities, and I am picking up leather and sweet earth notes. Tobacco qualities are present as well on the finish. Medium-full in strength and body.
John: Creamy wood starts the review off, as light wood carries into the post draw. A delayed mild pepper is present on the post draw after just a few puffs. As the first third settles in, sweet, faint nutmeg accents the retrohale. Some faint pepper and nuts are developing on the tip and inside of my lips. There is almost a strawberry sweetness on the retrohale, and through the finish a light dryness joins the wood. Some bread comes through the retrohale as it continues to develop, roughly at the 15 minute mark. 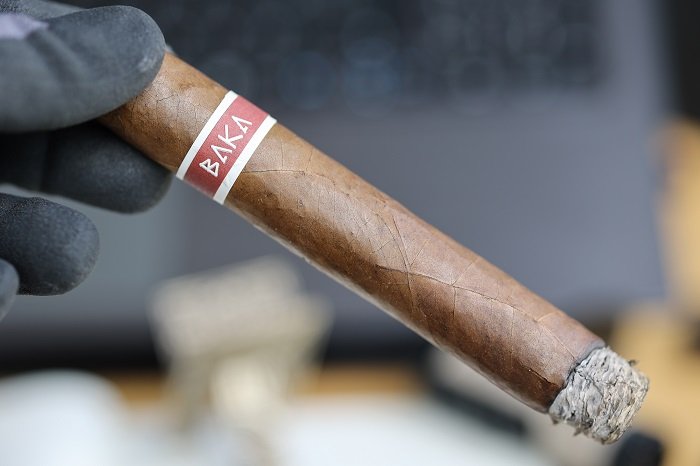 Aaron: As the second third begins, the black pepper has mellowed. At a half inch in, the dry earth is now even with the toasted cedar. The retrohale is a light mix of toasted cedar and dry earth. At an inch in, the black pepper is now very mild and the overall profile is a bit dry. As the third comes to a close, the toasted cedar and dry earth remain even with mild amounts of black pepper and creaminess in the background. The strength remains at slightly above medium.
Seth: The second third begins to show some bitter-sweet chocolate qualities, and they are paired with espresso beans, cloves, pepper and cinnamon. The earth, leather and tobacco notes are present as well, and the cigar is remaining at that medium-full level for strength and body. Lovely.
John: The second third opens with creamy bread and wood, as mild, dry wood carries into the post draw. There is a delayed, lingering sweetness and faint pepper on the post draw. The profile settles into a combination of creamy bread and wood, with mild dry wood in the post draw by the halfway point. 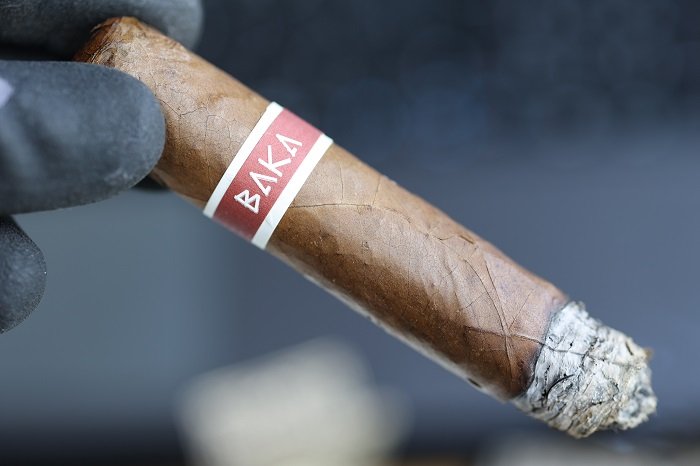 Aaron: As the final third begins, the dry earth takes a slight lead over the toasted cedar. At a half inch in, the toast level increases and brings a light bitterness. The retrohale is now a fuller mix of the dry earth and toasted cedar. As the cigar wraps up, the dry earth is slightly ahead of the toasted cedar with black pepper, creaminess and bitterness in the background. The strength remained at slightly above medium.
Seth: Like the second third, I continued to pick up those bitter-sweet chocolate qualities, but I also saw a return of the stone fruit/currant qualities. It is paired with spices of cloves, anise, pepper and cinnamon, and the finish had some espresso, earth, leather and tobacco qualities. This is complex, rich and filling.
John: The last third consists of creamy wood with bread, finishing with mild, tannic, dry wood into the post draw. Some muttiness comes in at the end of the draw, lingering into the post draw as it settles in. Some baking spices mix in with the wood on the retrohale by the halfway point. 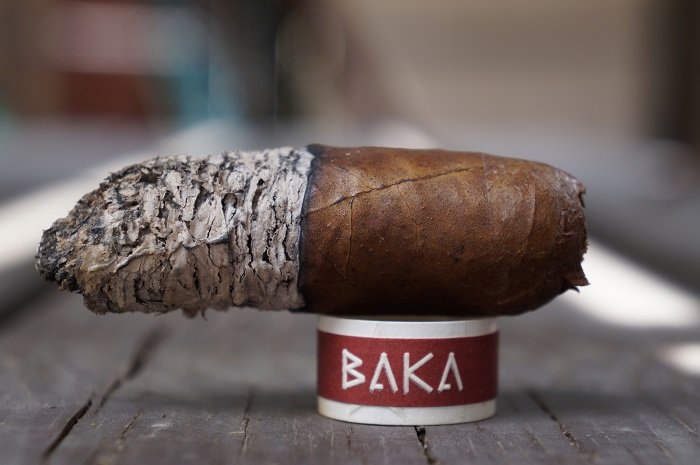 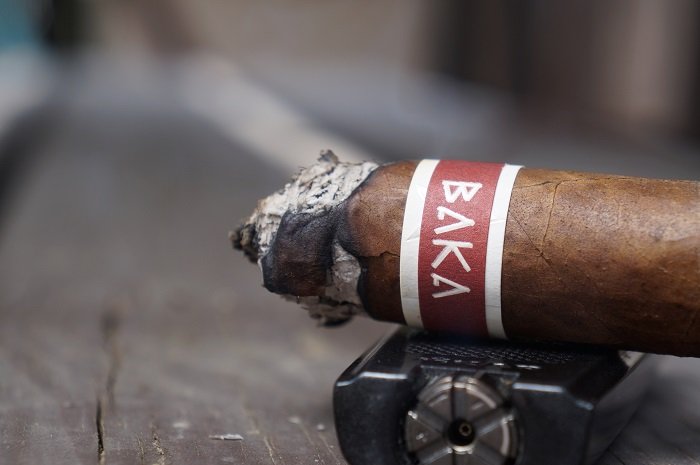 Aaron: The draw was perfect, with just the right amount of resistance that I prefer.
Seth: Lovely draw from start to finish.
John: The draw was at most one notch into the resistant spectrum, still inside the range for an ideal draw.

Aaron: The cigar began with toasted cedar, black pepper and mild creaminess. Some dry earth joined a bit later. The second third saw the pepper become very mild and the final third saw a light bitterness join in. The RoMa Craft Baka Hunter Gatherer started well, but once the dry earth built up in the second third, it was average the rest of the way. This vitola had a bit of a more enjoyable flavor profile than the Bantu we reviewed previously, but it’s still not a cigar I’d see myself coming back to all that frequently. It would need to dodge the prominence of the dry earth to bring me back.
Seth: Given the notes I picked up on the RoMa Craft Baka Hunter Gatherer, I would say I am a gatherer. You may be a hunter though. Only way to know is to go buy a Baka Hunter Gatherer. I love the strong Cameroon qualities that Skip delivers. I’ve always been a fan of Cameroon offerings, and this new trend of strong Cameroons is fun. When Skip first teased the Baka and all the offerings, I said at the time that I liked the larger ring gauge offerings. I think I liked the larger cigars in general. That appears to still be the case, and I look forward to smoking more of these. Complex flavors with a nice body and strength level. Really cool approach to Cameroon.
John: The review of the RoMa Craft Baka Hunter Gatherer was consistent with the sample I smoked years ago before the trade show. The flavors are nuanced, layered and balanced, and deliver engagement through the entire review. After working through all of the vitolas, the Hunter Gatherer was my favorite vitola of all of the offerings. I’d happily continue to smoke these on the regular, especially given that the price point is reasonable for a cigar with a Cameroon wrapper. Total smoking time was 1 hour and 46 minutes.