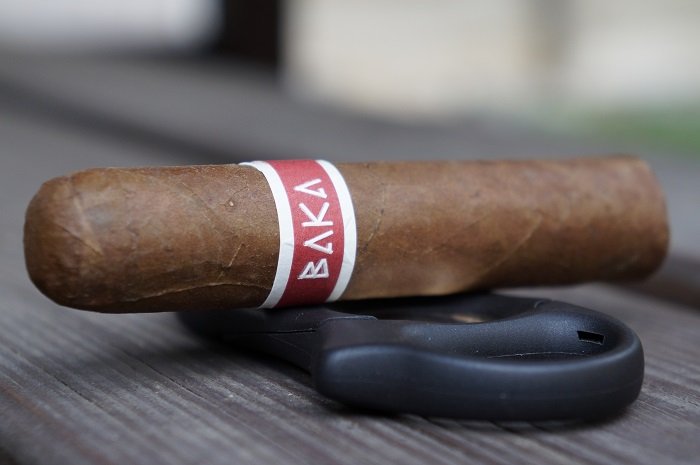 The wrapper on the RoMa Craft Baka Bantu is light brown and has a tinge of green to it. Some raised veins are present on both sides of the cigar and run the length. The seams are slightly lifted in some areas and easily visible while the head is well finished. The band is the fairly traditional style of the brand with a white underband wrapped by a slightly shorter outside band with this version being red with the line name in front in white and company logo on the back. The aroma from the wrapper is a mix of wood and stone fruit sweetness while the foot brings wood and leather. The pre-light draw is a mix of bread and cedar with a mild spiciness on my lips. 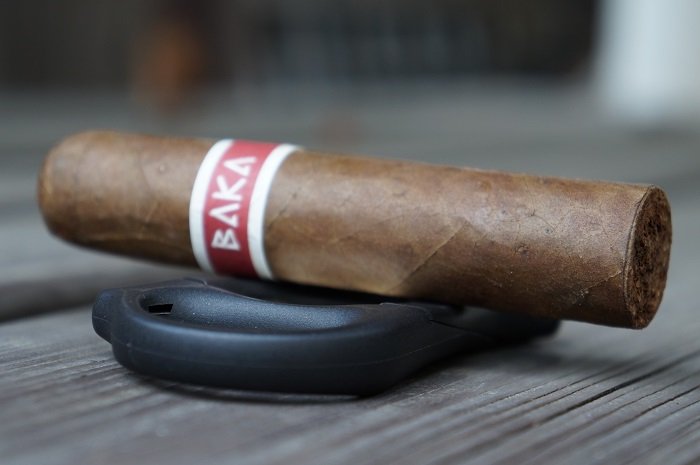 The RoMa Craft Baka Bantu has a faded brown wrapper and is right around Natural coloring. It really shows that old school, light Cameroon coloring. It has some faint tooth present and small veins throughout. It is firm in texture, not too gentle of a wrapper and it has an aroma of gingerbread cookies, soft cherries, cedar, dry earth and tobacco. 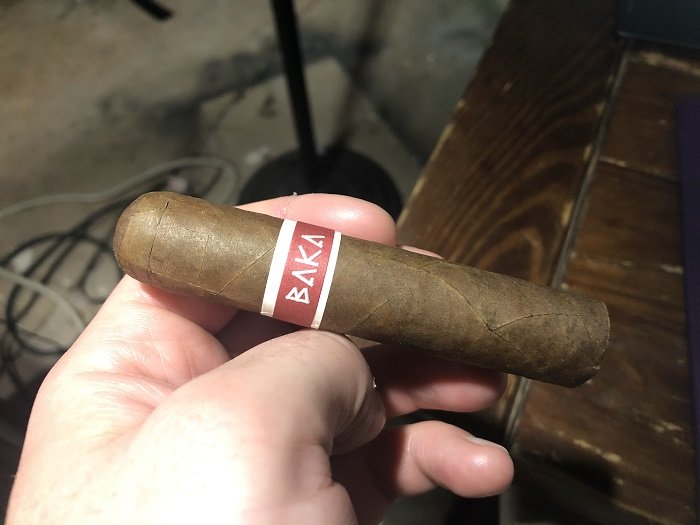 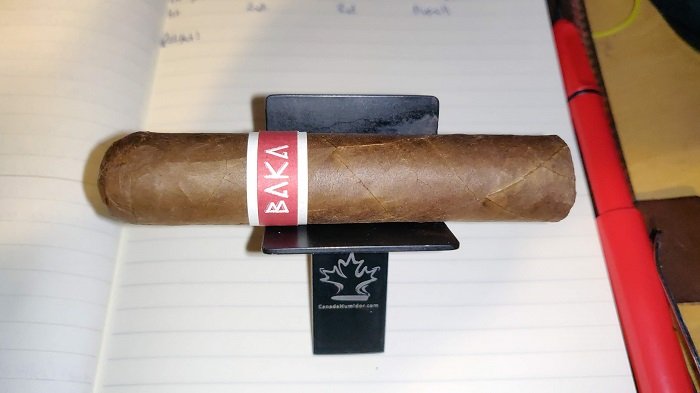 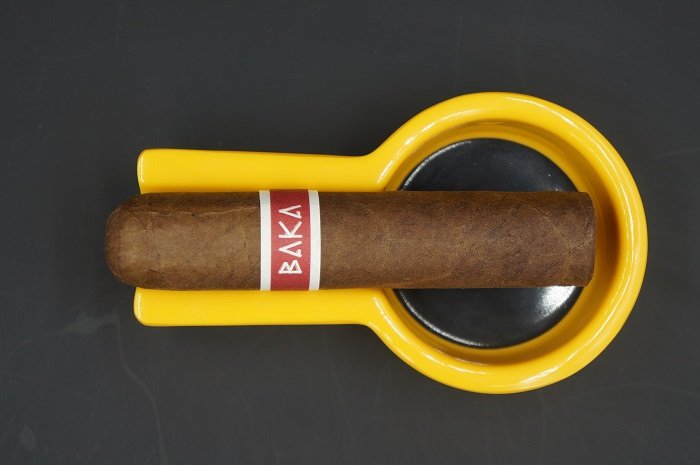 The cigar begins with slightly young wood and a note that’s hard to decipher between char and a concentrated baking spice. At a quarter inch in, the mystery note settles on char as a slight creaminess joins in. At a half inch in, the wood loses the youngness. The retrohale has black pepper up front followed by a slightly musty oak. At three quarters of an inch, the wood is now more defined as oak and still carries a light char as some creaminess and black pepper are right behind. The strength in this third was right at medium. 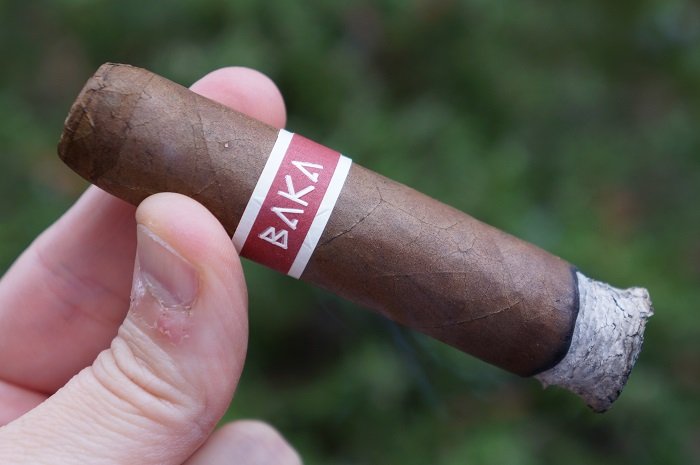 The first third begins by delivering complex flavors of cinnamon, nutmeg and almonds. There is some earthiness with that and some cream, cedar and soft spices. It is balanced and enjoyable. I would classify the cigar as being medium to medium-full and that goes for strength, body and flavors. 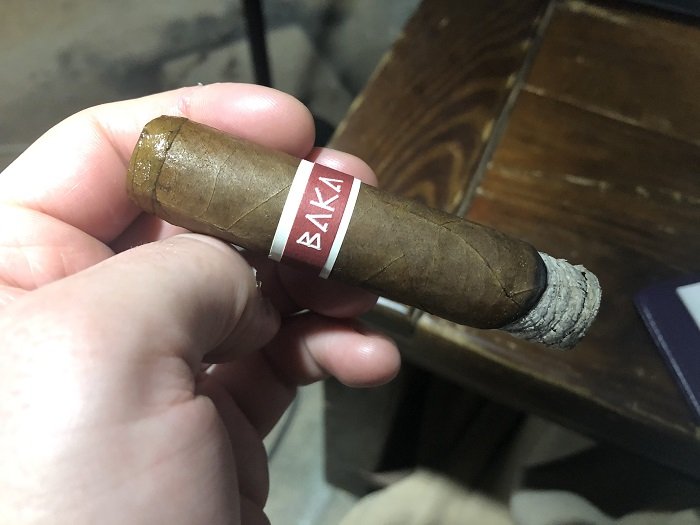 The first third opens with baking spices, cocoa and light white pepper. Spices almost immediately intensify to medium through the retrohale, bringing cedar that carries into the post draw at light levels. The spices move to medium plus on the retrohale, and cocoa joins at medium. Baking spices linger between draws along with dry cedar. At the 10 minute mark, baking spices reduce to medium minus. Post draw white pepper is at medium minus. By the 20 minute mark, the retrohale takes on a creaminess, with dry cedar moving into the middle of the profile. 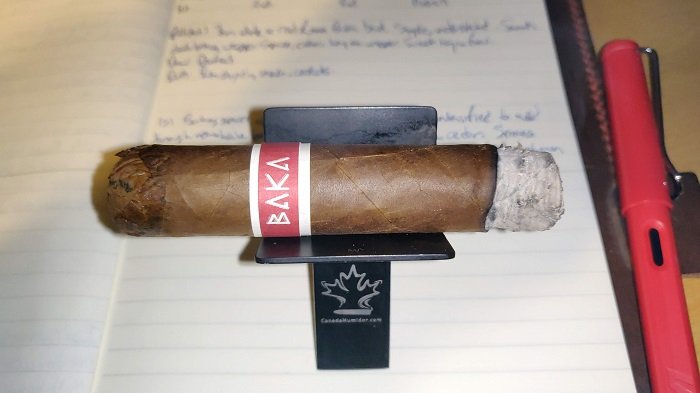 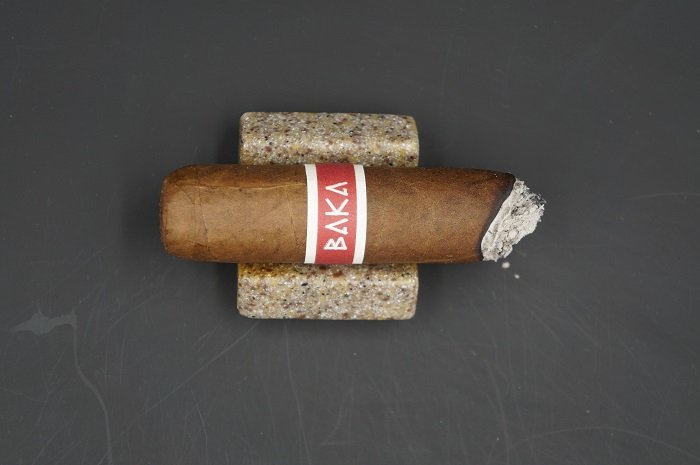 The second third sees the pepper ease up a bit while the cream is slightly ahead of it and the slightly charred oak is up front. At a quarter inch in, some minerality joins the profile. At a half inch in, a slight youngness returns to the oak. The retrohale is now musty and slightly charred oak. At an inch in, a vegetal note joins the profile as it’s hard to tell if the oak still has the young note or not. Mustiness also remains in the profile while the minerality has left. As the third comes to a close, the profile remains musty oak with a vegetal note in the background. The strength remains at medium. 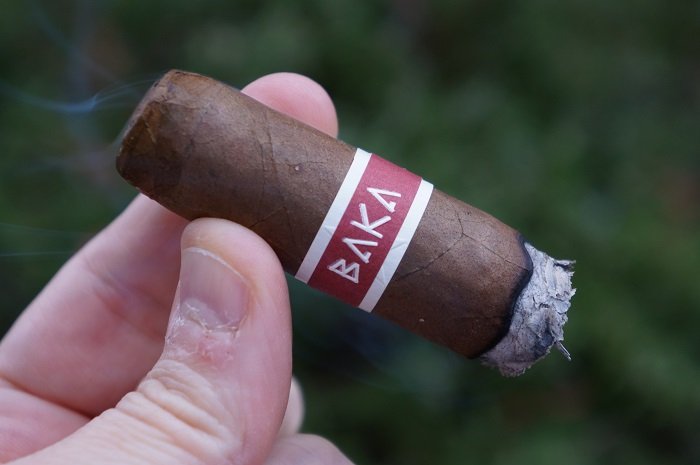 When I get into the second third, I am picking up some earthy notes and with that is some soft chocolate, nutmeg, cinnamon and cedar. There is a touch of creaminess and almond qualities present, but it is lighter in this third. Like before, the cigar is medium to medium-full in strength, body and flavors. 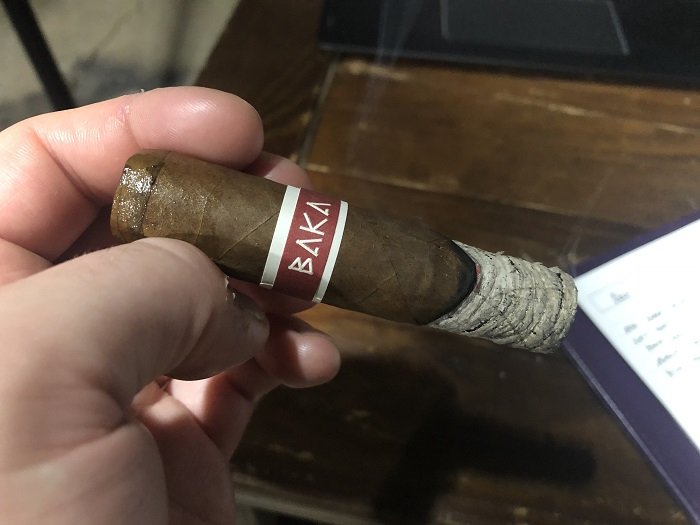 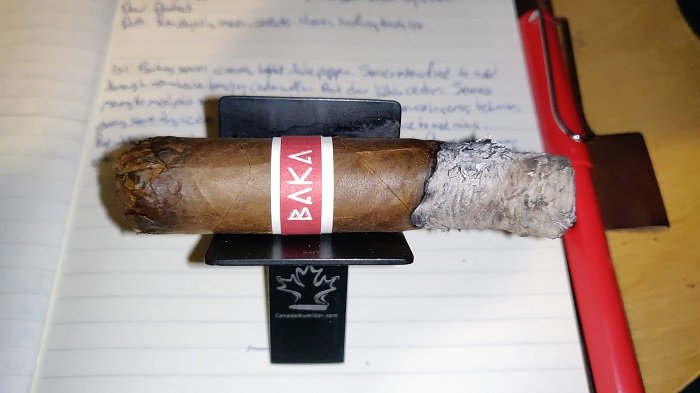 The second third has a couple of big changes. First, the strength ramps from medium to medium-full (body still medium). Second, the profile becomes significantly more earthy, increasing in cedar, cardboard and losing out on the sweet and creamy characteristics (cream coffee, rich nuttiness). The earthiness especially plays through on the finish, lengthening it. 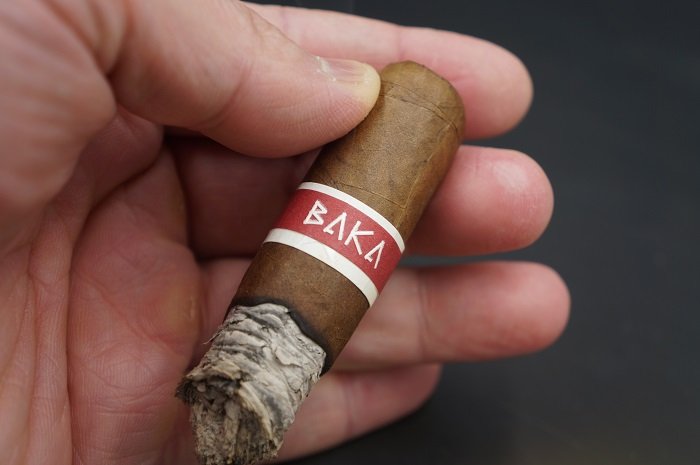 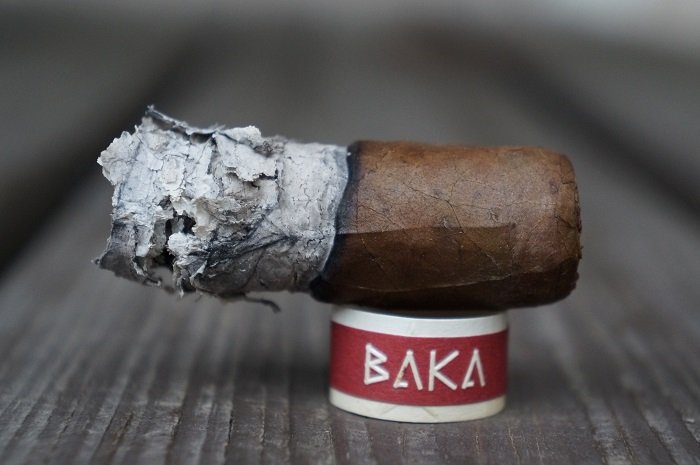 I am in the final third of the cigar now and finding some transitioning from the second third. I am getting some espresso and pepper notes, and it is paired with cedar, cinnamon and nutmeg. The finish is that of dry earth and it is more medium-full overall on the finish. 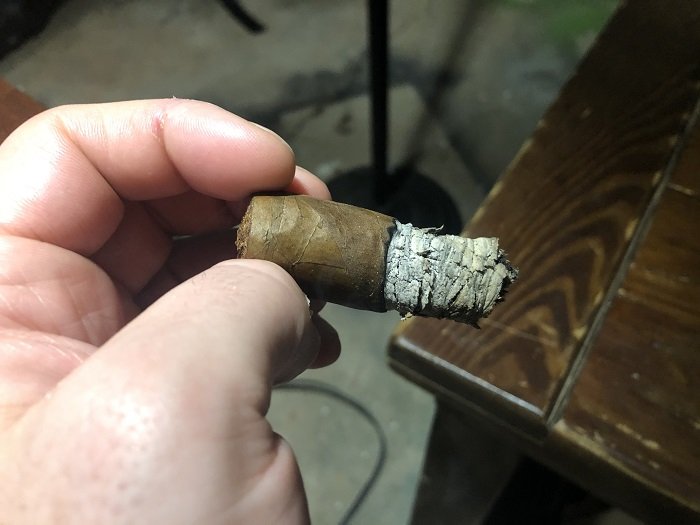 Bready cedar makes up the retrohale moving into the last third. Dry cedar takes up the middle of the profile. Toasted cocoa pushes the cedar aside as the last third settles in, with a toasted earth finish. 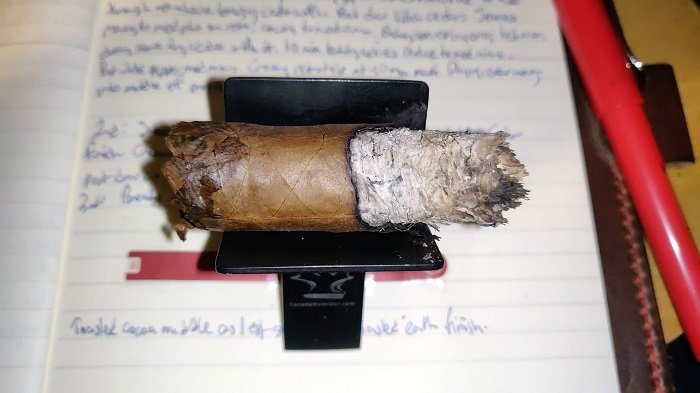 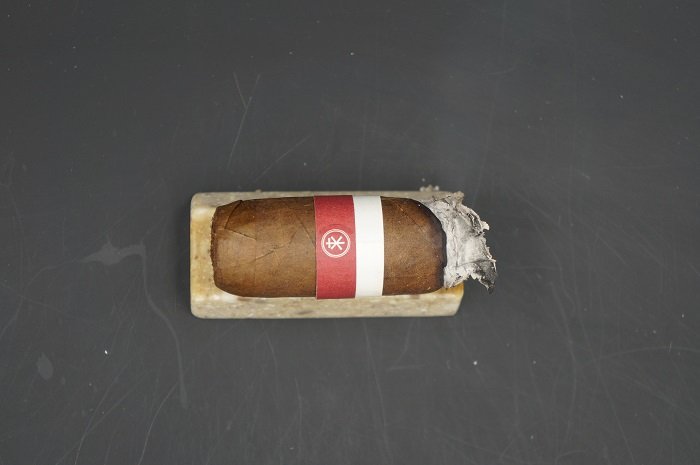 The burn was slightly wavy throughout. The cigar went out once right towards the middle and required a re-light and near the end of the second third required a touch-up to keep everything burning in unison. The ash held on in one inch increments. 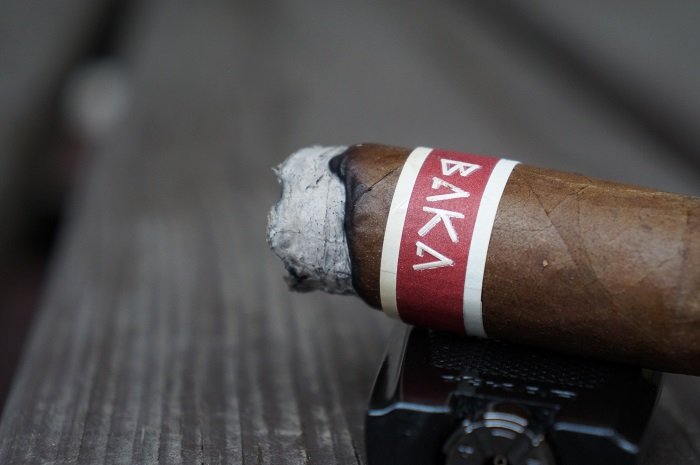 The burn was solid from start to finish. It was not razor sharp, but it didn’t present any problems overall and I didn’t need to touch up the cigar. With that, the ash held on well throughout and produced a light gray coloring. 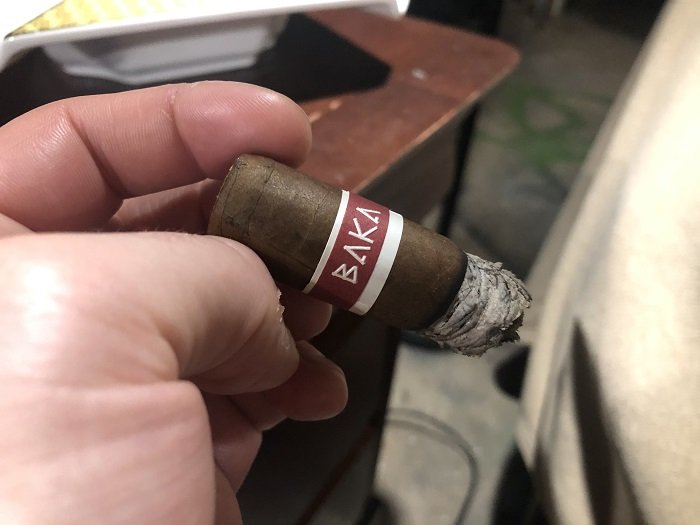 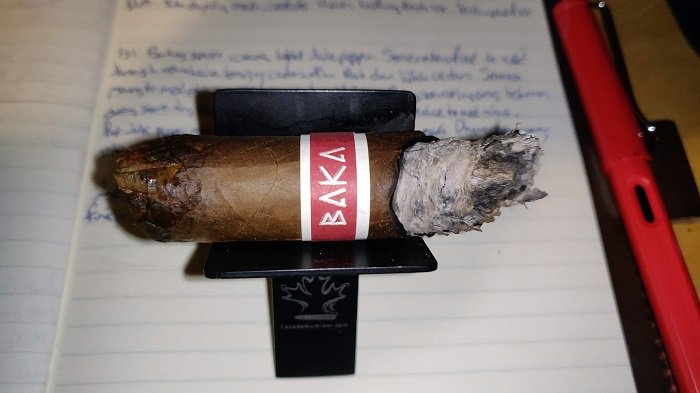 Aside from a quick touch-up and flaky ashes, the burn performance was great. 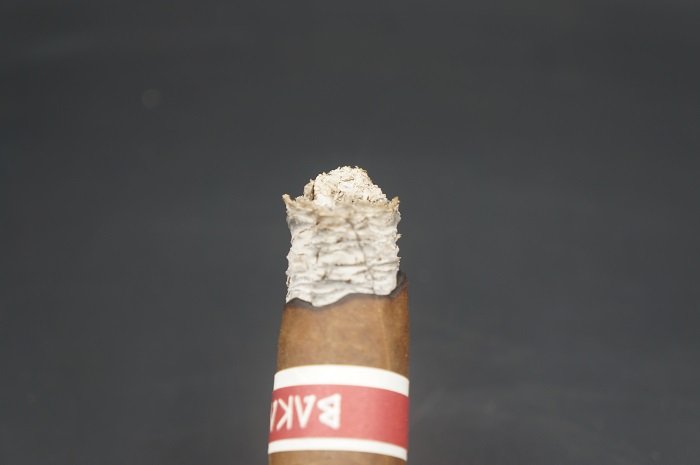 The draw was slightly tighter than I prefer but didn’t seem to cause any issues with the smoking experience.

The cigar began with slightly young wood and a note of char/concentrated baking spice which quickly settled on char. The youngness went away as some mustiness and black pepper joined in. The second third saw some youngness return and then morphed to a vegetal note. Things settled in to musty oak and the vegetal note. The burn was a bit of an issue with a re-light and a touch-up and strength was right around medium the whole way. The RoMa Craft Baka Bantu was searching for an identity and in a vitola this short, it didn’t have much time to find one. The profile was a bit young and I’m wondering if more time might help this particular size. I’m interested in smoking a longer vitola once they’re released to see what differences I’ll experience. Finding a good Cameroon offering is appealing, but this one doesn’t fit the bill for me and I probably will hold off on smoking more of these and search out the longer length future release vitolas for this line.

The draw was simply amazing on the cigar. It had the perfect level of resistance from start to finish.

Baka is a big release this year and it developed a lot of chatter when it was announced. For me, the question was what would RoMa Craft do with Cameroon? Could they produce what I believe to be a solid and classic Cameroon wrapper offering? In my opinion, it has been a long time since someone released a Cameroon wrapper offering that was awesome and delivered that flavor I loved. With that, RoMa Craft is not the company I think of when I think of classic Cameroon wrapper offerings. Since my initial feelings and thoughts, I have smoked almost the entire vitola offering in the line at and following IPCPR 2019, thank you to Skip Martin and also the cigars that were released to the market in November. Both experiences have been very different. I found the wrappers that were on the samples provided to me by Skip were darker and it went hand in hand with what Skip told me about the wrapper he acquired. The samples I smoked that were released to stores had a lighter and more traditional Cameroon appearance. I also believe the samples he provided at the show had more age on them. Because of this, I believe the initial samples I smoked to be superior to what hit shelves. I would have given a higher rating to the cigars I smoked at and following the show than these RoMa Craft Baka Bantu that were purchased. I believe they deliver a superior flavor profile and while it still had that traditional Cameroon quality, it was darker and heavier at the same time. It is definitely a line that smokes better in certain offerings, and I find it smokes the best in the Pygmy and Hunter Gatherer offerings. Even the Ota Benga smokes great. These cigars need some aging time and with that, they will be great. I will love to see how these smoke in six months. In some ways, RoMa Craft channeled Habanos S.A. The cigars need a little bit of time to age and if you can choose between a lighter or darker shade wrapper, go with the darker shade.

The draw was in the ideal zone of resistance.

I had the fortune to smoke a number of different sizes of the Baka during the 2019 IPCPR show in Las Vegas. I would say that my typical experience was the cigars were good, bordering on very good. The samples smoked for review were purchased at retail, and the first and second thirds exhibited interesting flavor complexity. Notes of baking spices, cocoa, white pepper, cedar and creaminess made for an enjoyable experience and a rating of good. Total smoking time was 1 hour and 18 minutes. Overall, I enjoyed the Baka Bantu and would smoke it again.

The draw on the other hand was flawless, giving the ideal air flow.

Showing much promise within the opening third, but leading to a mediocre remainder. Sounds like the story of most cigar reviews this year. If the RoMa Craft Baka Bantu tasted like the first third the entire way through, it would absolutely have been a grand slam. Unfortunately, that was not the case, which is pretty disappointing, especially for a smaller cigar. I hope time will improve the cigar.