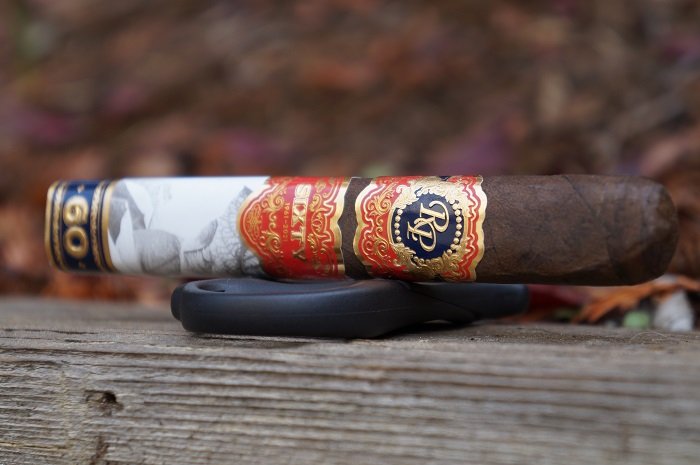 Aaron: About 75% of the Rocky Patel Sixty Robusto is covered by the three bands. The primary and secondary bands are red and gold with the primary having some added black and carries the company logo While the secondary band denotes the line. Tucked under the secondary band and running to the foot is a sleeve band that has black and gold at the bottom with the number 60 on it and the upper portion white and grey with an image of a tobacco plant. After sliding off the sleeve, I get a better look at the soft rectangle press sporting a dark brown wrapper with some lightly raised veins. The seams are raised a bit while the caps are well applied. The aroma from the wrapper is dark earth with light wood while the foot brings sweet and musty cedar. The pre-light draw brings the same sweet and musty cedar along with a mild spiciness on my lips.
Seth: The Rocky Patel Sixty Robusto is finished with a milk chocolate colored wrapper that is silky in texture. There are few veins present throughout, and it has consistent coloring. Light maduro. Aromas of cocoa powder, coffee beans and wood.
John: When Rocky Patel decides to showcase a cigar, they really know how to showcase a cigar. The Rocky Patel Sixty Robusto to celebrate Rocky Patel’s 60th birthday certainly pulls out all the stops in the pre-light department. The cigar is cellophaned, with a UPC sticker that has an integrated tear tab so it remains intact when the cellophane is opened. The cigar is triple banded, with a secondary ‘Sixty 1961-2021′ to commemorate Rocky’s birthday, along with a large paper band and integrated foot band that says ’60’. For additional artisanal complications the cigar has a sharp box press shape. For aromas, I was picking up on spices, prominently nutmeg, potting soil and black tea. From the foot, sweet citrus and tobacco.
Jiunn: Excuse me Sir, may I have yet another band please? My goodness, show more of that beautiful oily Mexican San Andres wrapper. Once I peel back all the bands, the Rocky Patel Sixty Robusto looks good. Veins are well pressed, seams tight, bunch and roll even and head well wrapped. Aromas from the wrapper tell baking spices and cedar. Aromas from the foot give sweet prunes, white pepper and cedar. Cold draw tells hay and cedar. 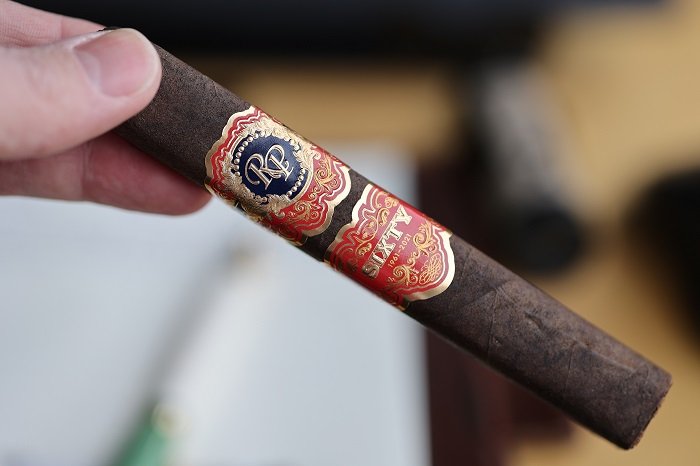 Aaron: The cigar begins with charred wood and black pepper. At a quarter inch in, the char mellows to a heavy toast while some creaminess and mustiness join the profile. The retrohale is toasted wood and black pepper. At an inch in, the wood is more defined as oak. As the third comes to a close, the profile is musty, toasted oak with black pepper a bit behind and some light creaminess in the background. The strength was slightly above medium.
Seth: The cigar opens with strong sweet spice notes. I am picking up bits of cinnamon, anise and black pepper. There are some earth notes as well, and the finish is that of leather, cocoa powder and wood. Medium to medium-full in strength and body.
John: My initial flavor impressions were sweet graham cracker, subdued baking spices and chocolate combined with mild earth and wood to finish the draw. Black pepper starts to build on my tongue tip through the post draw after a few puffs. As the first third progresses, black tea moves into the middle of the profile. The profile becomes black tea and earth forward as it continues, the cocoa moving back in strength to mild. By the halfway point, the chocolate has come back in intensity, bringing with it a heavy cream and cocoa to the post draw.
Jiunn: The first third is quite nice. A baking spice backbone with surrounding bread, subtle milk chocolate and cedar. Retrohaling allows for a more prominent spice to shine, in the form of spicier baking spices, but also gives a creamier and milkier chocolate. The finish is most lacking, as it’s a bit mundane with baking spices and leather. Strength is medium-full, body is medium. 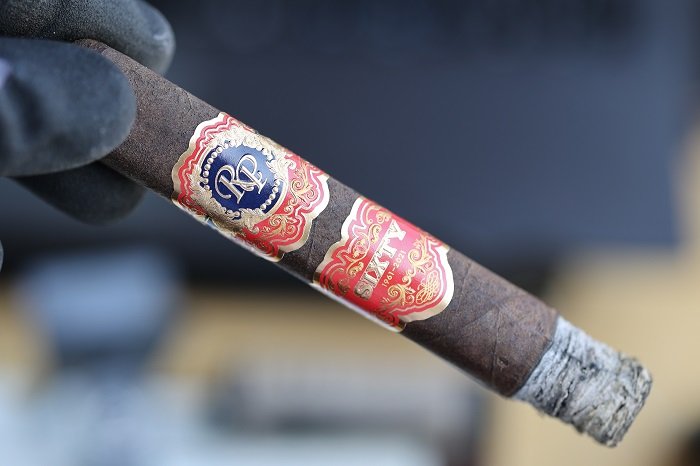 Aaron: As the second third begins, some dry, dark earth joins the profile, creating a bit of overall dryness in the profile. The retrohale is now musty, toasted oak with dry earth a bit behind and black pepper a bit behind that. At three quarters of an inch in, the light creaminess has departed. At an inch and a quarter, the dry, dark earth is now even with the musty, toasted oak. The strength remained at slightly above medium.
Seth: The second third has a flavor profile of sweet spices, and I am picking up that cinnamon, black pepper and anise. I am getting leather, dark cocoa and earth as well. Medium-full in strength and body.
John: The second third started out with cocoa, baking spices and earth with the finish still comprised of earth as wood provides a background note. As the second third settles in, black tea returns to the middle and end of the draw. Moving towards the middle, wood comes back in intensity on the post draw, bringing with it tannins.
Jiunn: The second third’s enjoyment level decreases. The primary reason is due to having too much leather (especially on the finish) and having less of the milk chocolate and bread tones. Strength and body is unchanged, medium plus and medium, respectively. 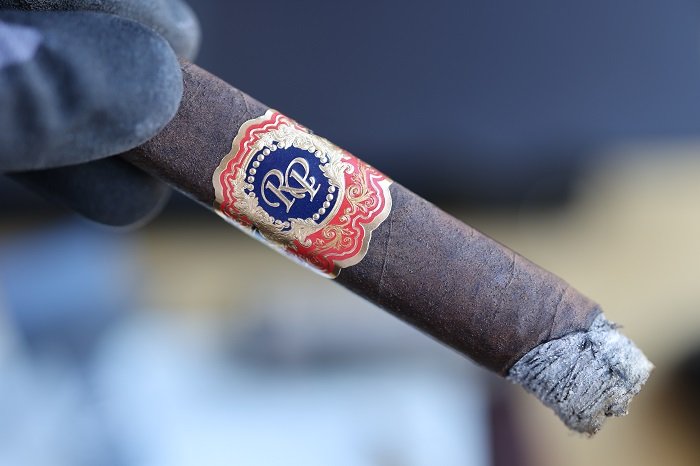 Aaron: As the final third begins, the musty, toasted oak and dry, dark earth remain even up front with the black pepper in the background. The retrohale is now just an even mix of the musty, toasted oak and dry, dark earth. At three quarters of an inch in, the black pepper picks up a bit. The cigar wraps up with the musty, toasted oak and dry, dark earth even up front with the black pepper just a bit behind. The strength remained at slightly above medium.
Seth: To no surprise, the final third was right in line with the first and second. Sweet spices, wood, leather and cocoa powder. You can get that cinnamon and black pepper. Sharp profile throughout. Medium-full in strength and body.
John: The last third started out tannic wood and earth forward, with dry tannic wood finishing the draw. The black tea remains in the middle of the profile, which leaves me with quite a dry mouthfeel overall. The profile becomes gritty earth forward as it progresses. Wood moves into the middle of the profile, supplanting the black tea as it progresses.
Jiunn: The final third mimics the second third. Still too much leather influence that lathers the tongue thick and heavy. Strength and body finishes the same medium plus and medium. 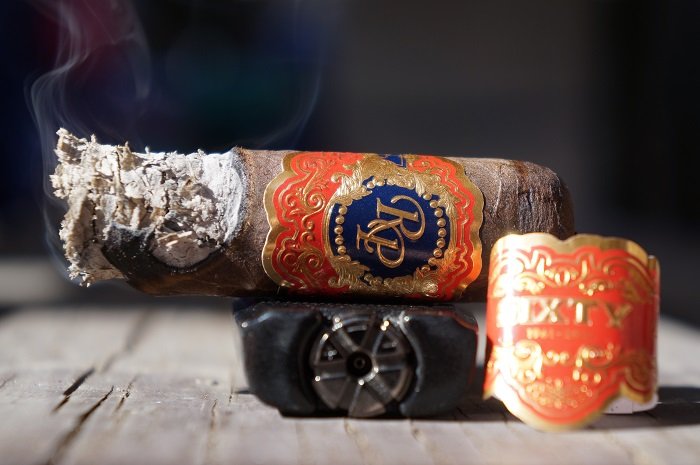 Aaron: The burn line was pretty straight throughout, but the cigar did go out twice, requiring re-lights.
Seth: Great burn throughout.
John: As has been my experience with most Rocky Patel cigars, the burn was razor sharp with an ash that held on up to one inch increments before I would knock it off.
Jiunn: Just one small mishap on the burn, which was a couple quick touch-ups to get the burn on track. But overall, it burned well as it smoked cool, gave ample smoke production and solid ashes. 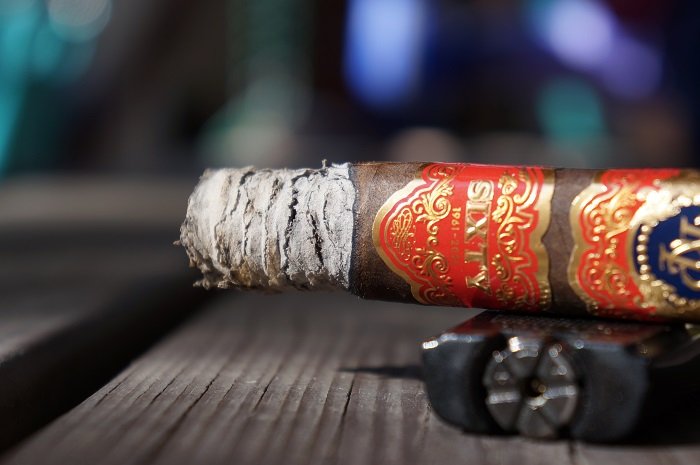 Aaron: The cigar began with charred wood and black pepper which quickly mellowed to a heavy toast and more defined as oak. Some mustiness joined it a bit later. The second third saw dry, dark earth join in and maintained that profile the rest of the way. The Rocky Patel Sixty Robusto started well, but when the dry, dark earth joined in the second third, it caused the overall profile to drop a bit in enjoyment and maintained that level the rest of the way. The cigar carries a hefty price point and it doesn’t really live up to it as the profile was average most of the way. I don’t see this as something I’d come back to all that often.
Seth: The Rocky Patel Sixty Robusto lacked balance, depth and complexity. The flavors were right in your face, and sharp. There were no subtle qualities, and anything beyond the initial blast. Bottle rocket of a cigar. Nice construction throughout. Can we stop with these Mexican San Andres wrapper offerings?
John: The first third of the Rocky Patel Sixty Robusto offered up an interesting combination of graham cracker, nutmeg, chocolate, black pepper, black tea and earth that waxed and waned to provide engagement to my palate. Much of the complexity fell off by the second third and last third leaving me with a pleasant, albeit average flavor experience. The burn was flawless and the draw had some minor resistance to it. Given the flavor experience and pricing of this size, I would not be likely to return to the Robusto. With that said, I’ll be revisiting the Sixty in the other vitolas to see how they stack up. Given the box pressed shape of the cigar, I was quite surprised at the blistering smoking time of 1 hour and 16 minutes. This is fully 30-45 minutes faster than I would expect of a cigar this size.
Jiunn: Another Mexican San Andres, another mediocre one. While I thoroughly enjoyed the first third, the latter two thirds showed too much leather without backing it up with other notes. The Rocky Patel Sixty Robusto has a good number of flares (triple bands, nice quality wrapper), but I don’t care about that, as I’m only concerned about the flavor delivery. So given that perspective, the higher $16 price point just doesn’t deliver.