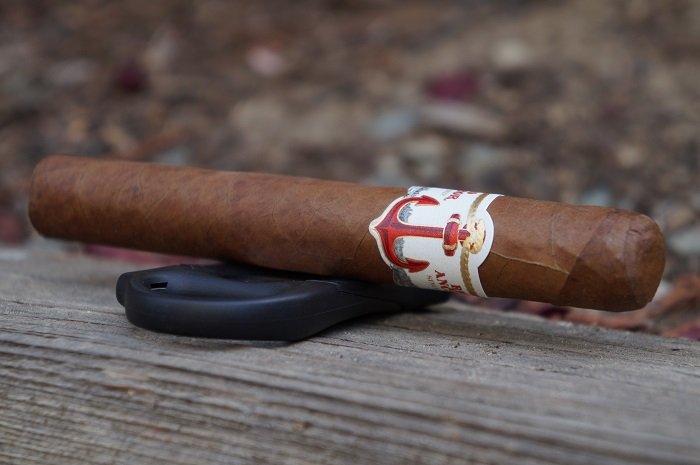 Aaron: The wrapper on the Red Anchor Admiral is light brown with some darker marbling and has a network of lightly raised veins. The seams are smooth and the caps well applied. The band is off-white, red and gold with a black and white cityscape along the bottom. The aroma from the wrapper is a hay and earth forward barnyard funk while the foot brings lightly musty cedar and earth. The pre-light draw brings floral notes and cedar along with a mild spiciness on my lips.
Seth: Finished with a lovely wrapper that is predominitaely Colorado with some dark Natural marbled coloring, the Red Anchor Admiral has this great red clay color. Small to medium size veins throughout. Firm thoughout with a nice oily and leathery texture. The cigar has aromas of sweet spices, tobacco and cherries. Bits of rich earth present as well with some damp wood. Great aromas.
John: The Red Anchor Admiral comes in cellophane and has a UPC sticker that tears in half when the cellophane is opened. The cigar has a single band. Aromas off the wrapper include sweet hay, mild barnyard, faint earth and wood underneath. From the foot, I could detect hay, a more intense barnyard center and trailing wood.
Jiunn: The Red Anchor Admiral has a Colorado wrapper shade. Veins are well pressed, seams tight, bunch and roll even and head well wrapped and capped. Aromas from the wrapper tell basement musk and aged cedar. Aromas from the foot give rich white pepper spice, cedar and nuts. Cold draws reveal aged cedar, hay and dehydrated vegetables. 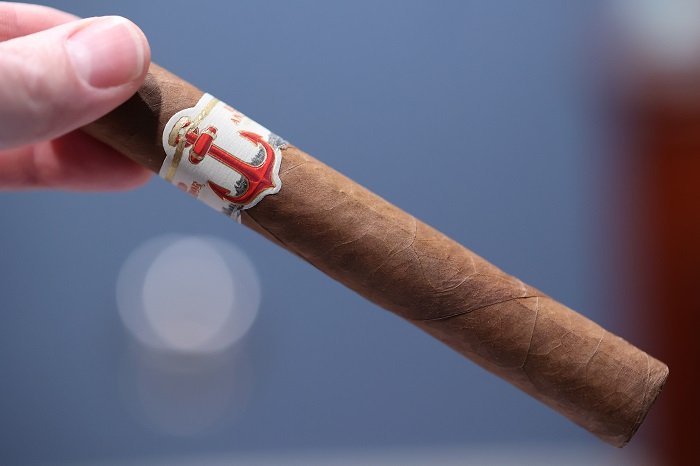 Aaron: The cigar begins with lightly toasted cedar a light amount of mustiness and a slight wood bitterness. At a quarter inch in, a light floral note becomes present. The retrohale is toasted cedar along with light amounts of floral notes and earth. As the third comes to a close, the toasted cedar is up front with mustiness and floral notes a bit behind and a light wood bitterness still hanging on in the background. The strength was slightly below medium.
Seth: The first third opens up by deliving some toast notes with damp salted wood. Soft red pepper notes are present along with some leather, cream and tobacco on the finish. Medium in strength and body, the cigar is balanced.
John: Musty tobacco gets things going, with a vegetal/celery/spinach and iron center, as dusty wood finishes the draw. Quite an unusual combination of flavors. The retrohale consists of sweet, fresh wood. As the first third settles in, milk chocolate moves alongside the vegetal and combines with the wood on the finish. Some time later, light spices are present at the end of the draw.
Jiunn: The first third shows awesome depth, nuance and balance. Supremely well melded flavors centered around dried red pepper spice, hay, honey, biscuits and a little mushroom funk. Retrohaling deepens the dried red pepper spice but also shows faint tart cherries. The finish shows a long and lingering aged cedar and subtle dried red pepper spice on the rear palate. Strength and body is medium. 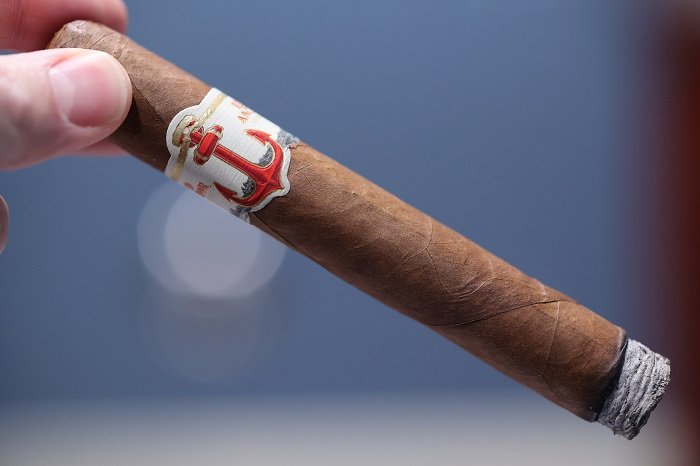 Aaron: As the second third begins, the wood bitterness picks up a bit. At a half inch in, the floral note moves closer to the front of the profile. The retrohale remains toasted cedar along with light amounts of floral notes and earth. At an inch in, some earth has joined the profile. At an inch and a quarter, the wood bitterness is back to being mellow. As the third comes to a close, the toasted cedar is up front with the floral note right behind and then mustiness, earth and wood bitterness in the background. The strength remained slightly below medium.
Seth: The second third shows a rise in the spice qualities and I am getting more black and red pepper. Lots of wood and leather present as well with some creamy traits on the finish. Medium to medium-full in strength and body. Hay and grass qualities on the finish.
John: Chocolate, bread, baking spices and musty wood lead off for a complex open to the second third. That profile is consistent all the way to the halfway point, with wood moving up in intenisty on the post draw, and bringing with it dry accents.
Jiunn: The second third’s dried red pepper spice cranks it up a notch. But it’s beautifully offset by honey, hay and cedar. This might be one of the best combinations of flavors I’ve ever tasted in a cigar. Strength and body remains medium. 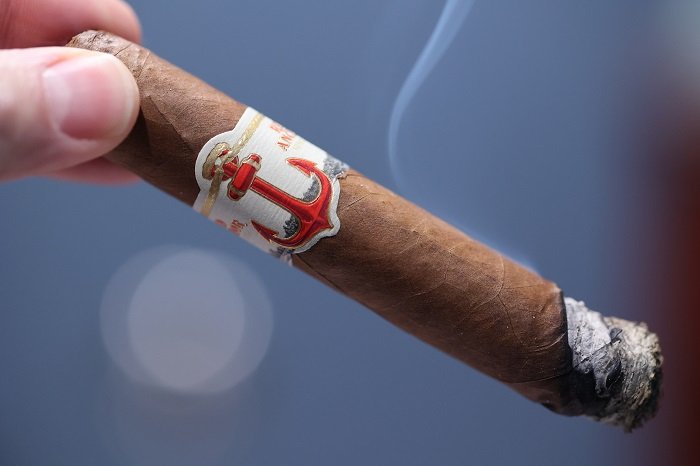 Aaron: As the final third begins, the wood bitterness increases once again. At a half inch in, the toasted oak is just ahead of the floral note and wood bitterness with light earth and mustiness in the background. The retrohale is now toasted oak, floral notes, earth and light wood bitterness. At an inch and a quarter, both the toast level and the earth increase as the cigar warms up. As the cigar wraps up, the profile is toasted cedar up front with floral, wood bitterness and earth right behind and mustiness in the background. The strength bumped up to medium.
Seth: Lots of red and black pepper notes. Some wood, tobacco and hay qualities as well. No cream present. Wood, tobacco and spice finish. Medium to medium-full in strength and body.
John: The last third opens with muted bread, baking spices, wood and a medium-plus strength wood with a long finish on the post draw. As the last third progresses, wood moves into the center and dry hay joins the post draw. The post draw wood falls in intensity moving towards the halfway mark. Some light baking spices provide an accent note through the retrohale.
Jiunn: The final third is the same as the second third. Still assertive dried red pepper spice offset by honey, hay and cedar. Strength and body finishes the same medium. 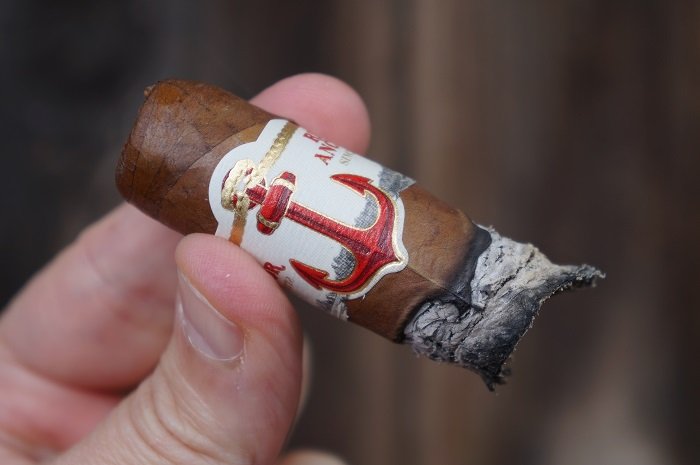 Aaron: The burn was a bit wavy throughout and the cigar went out twice, requiring re-lights. The ash held on in about inch and a half increments.
Seth: Nice burn throughout. Not perfect, but nice.
John: The burn was straight to start, becoming uneven in the second third that required a touch-up. The burn was uneven again in the last third, requiring a second touch-up.
Jiunn: Burn performance was overall very good. Only setback was a couple of quick touch-ups to get the burn back on track. 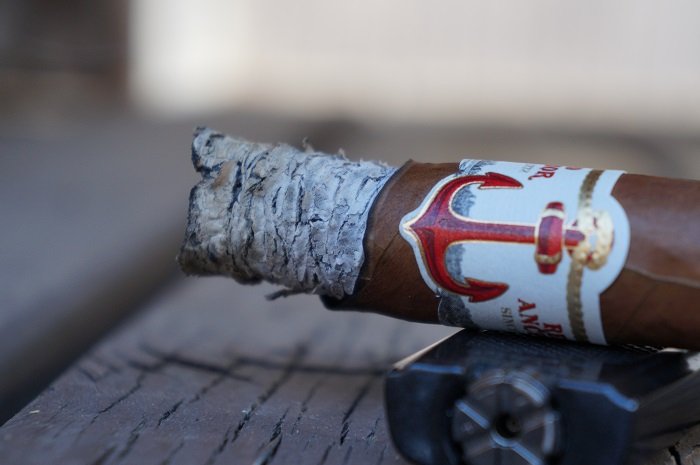 Aaron: The draw was perfect, with just the right amount of resistance that I prefer.
Seth: Very good draw throughout.
John: The draw was a minor amount towards the resistant spectrum, roughly one notch, still putting it in the ideal range for a perfect draw.
Jiunn: The draw was almost perfect. Slightly snug for my liking, but not a big deal.

Aaron: The cigar began with lightly toasted cedar, a light amount of mustiness and a slight wood bitterness. A floral note joined in fairly quickly. Through the rest of the cigar, the components moved around in intensity and the final third saw some earth join in. The Red Anchor Admiral had an interesting flavor profile, but the wood bitterness that was present throughout put a bit of a damper on things for me. It just never allowed me to enjoy the rest of the profile, which is a bit of a bummer. I’m hoping the other guys can share a more enjoyable experience, but at this time, with the flavor experience and the price point, it’s just not something I’d see myself coming back to.
Seth: This Red Anchor Admiral was an enjoyable cigar and blend. I liked the red pepper, tobacco and cream notes, and I really appreciated how balanced the blend was thoughout. It showed some transitioning, but not a lot of complexity. Construction was decent. It really made me think of similar blends out of the Dominican Republic that are already on the market. Availble at lower prices as well. I liked the cigar and packaging, but I don’t see myself coming back to the blend.
John: The Red Anchor Admiral provided a combination of flavors through the first third that were unique and intriguing, with a more traditional rich flavor experience through the second third. The last third had too much wood and dry accents for my taste, which proved to be distracting. The draw was perfect, unfortunately the burn required two touch-ups to correct uneveness. The price point is well into the super premium category, but this cigar is intriguing and interesting and I can see people picking this up as a celebratory cigar or appealing to aficionados already into the super premium market. Total smoking time was 2 hours and 14 minutes.
Jiunn: Every once in a while, I’m reminded of why I have a profound love for cigars. The Red Anchor Admiral is not just a one box buy, it is a multiple box buy. Yes it is pricey, but the enjoyment factor outweighs the price point. Hendrik Kelner Jr, I see you.