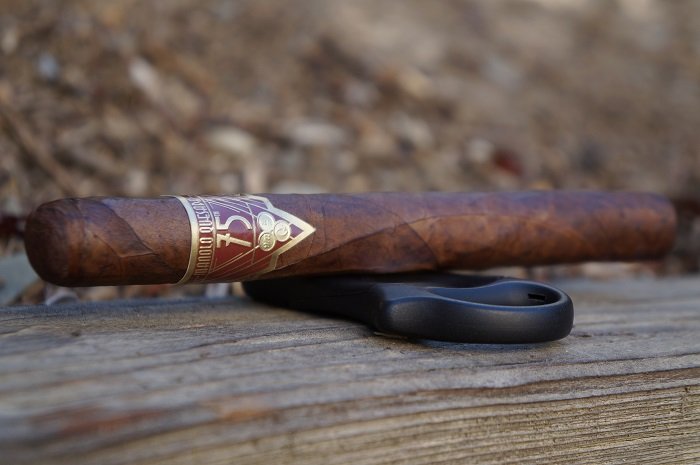 Aaron: The Quesada Manolo Quesada 75th Anniversary looks pretty rustic with a wrapper that is medium reddish-brown with some darker marbling and carrying some thick veins with veins protruding from the binder. The seams are raised in some areas and the caps are decently applied. The band is reddish-brown and gold and denotes the line name. The aroma from the wrapper is musty earth and light cedar while the foot brings cedar and stone fruit sweetness. The pre-light draw is aged and slightly sweet cedar along with a mild spiciness on my lips.
Seth: Marbled in coloring, the Quesada Manolo Quesada 75th Anniversary has a dark Colorado-Maduro wrapper. Slightly oily in texture, and smooth, the wrapper has small veins throughout. Firm in hand, I am getting aromas of licorice, manure, dark spices and stone fruit.
John: The Quesada Manolo Quesada 75th Anniversary comes in cellophane, and has a UPC attached to the main body of the cellophane so it remains intact when opened. The cigar has a single band and no artisanal complications. Aromas off the wrapper included old barnwood, mild earth and sweet earth. Out of the foot, I was getting sweet tobacco and hay.
Jiunn: The Quesada Manolo Quesada 75th Anniversary has a glossy deep oily shine to the Colorado Red-ish wrapper shade. Veins are well pressed, seams tight, bunch and roll even and head well wrapped and capped. Aromas from the wrapper tell of an ample wet barnyard and sweet nuttiness. Aromas from the foot give similar notes as the wrapper smell, but with more pronounced sweetness. Cold draws reveal hay and cedar. 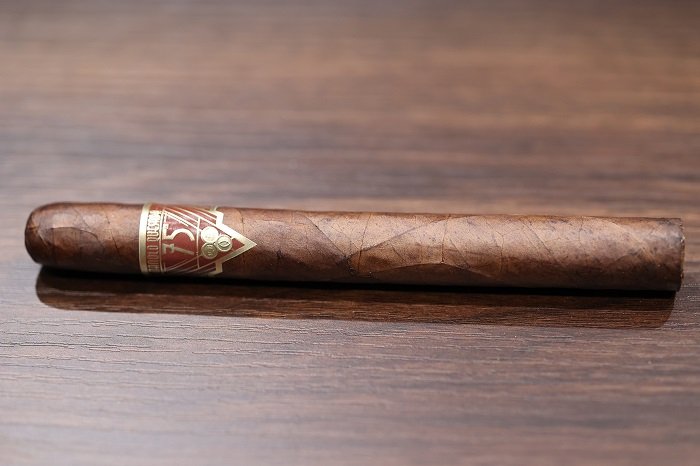 Aaron: The cigar begins with cedar that is lightly toasted and has a light dampness along with mild black pepper and light mustiness. At a half inch in, some light earthiness joins in. The retrohale is lightly toasted and lightly musty cedar with mild earth and black pepper. At an inch and a half in, the dampness picks up a bit. As the third comes to a close, the profile is musty, damp and toasted cedar up front with earth and black pepper behind. The strength was right at medium.
Seth: The first third starts off with damp earth and wood notes that are paired with some mineral and pepper spice qualities. There are some unsweetened cocoa qualities as well, and there are baking spice qualities with that. Very dark, but balanced. Medium in strength. Medium to medium-full in body.
John: The first few puffs bring flavors of sweet tobacco, cereal and a wood and earth combination to finish and linger into the post draw. A delayed red pepper flake begins to develop on the post draw. Once the first third has had a chance to settle in, a cream develops on the retrohale. Moving towards the halfway point, the flavor profile is defined by sweet wood, mild earth and a wood and mild spice combination on the post draw.
Jiunn: The first third’s flavor profile consists of celery seed, subtle dried nuts and cedar. The mouth draw flavors seem a bit thin overall. Retrohaling helps as expected, providing increased celery seeds and more dominant cedar. The finish shows trailing cedar and hay mix. Strength and body is medium. 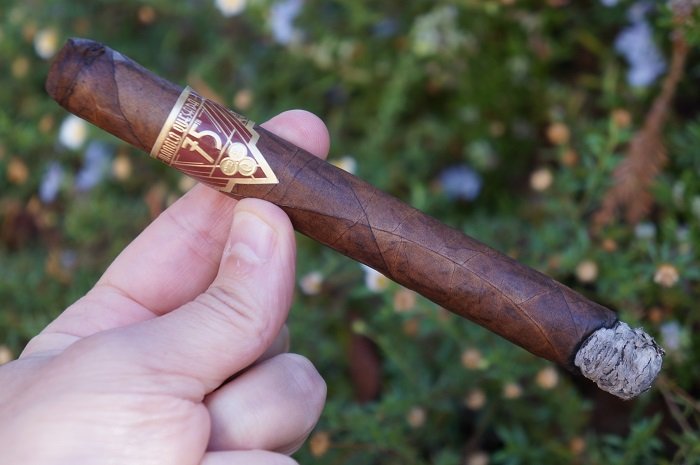 Aaron: As the second third begins, the dampness is back to being very light and the black pepper is very faint. At a half inch in, the earth is now right behind the toasted and musty cedar as the dampness has departed. The retrohale is now toasted and musty cedar with light earth. At an inch in, a light wood bitterness joins. As the third comes to a close, the musty, toasted cedar is up front, with earth right behind and black pepper and wood bitterness in the background. The strength remained at medium.
Seth: The second third shows a lot of similarties to the first third. Damp earth and wood notes with some mineral spices and unsweetened cocoa. Bits of pepper on the finish. Again, medium to medium-full in body. Medium in strength.
John: The second third delivers bread, sweetness and a wood and earth combination to finish into the post draw. A mild, dry wood shows up on the post draw after a few puffs. As the second third settles in, a musty tobacco is present through the retrohale. The dryness on the wood moves up to medium. A general sweetness quietly shows up on the center of the profile as the second third continues. Moving towards the halfway point, the bread has moved to the front of the profile. By the halfway point, the earth is pushing the bread and sweetness to the side. The wood evolves into a dry, tannic wood in the bottom half.
Jiunn: The second third’s flavor profile tastes more muddled than the first third. The flavors of celery seeds, dried nuts and cedar meshes into a bit of a glob. Strength and body remains medium. 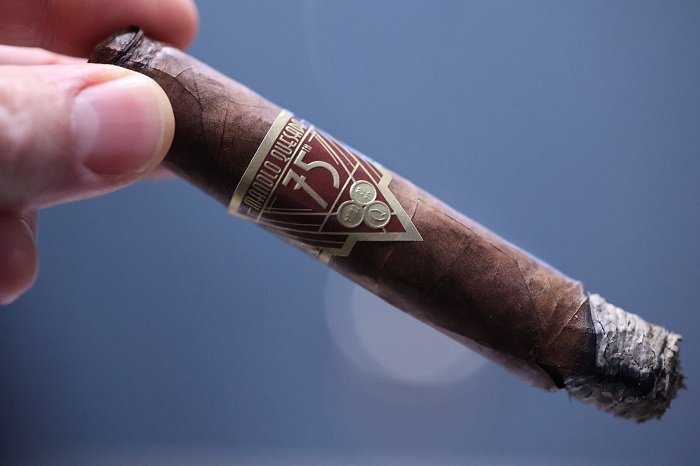 Aaron: As the final third begins, the mustiness picks up a bit. At three quarters of an inch in, the earth is now even with the musty, toasted cedar up front. The retrohale is now musty cedar and earth with mild black pepper. As the cigar wraps up, the musty, toasted cedar and earth are even up front, with wood bitterness in the middle and black pepper in the background. The strength remained at medium.
Seth: The final third was in line with the first and second. Identical notes. Medium-full in strength and body though.
John: The last third gets going with dry wood, a tannic wood center and dry, tannic wood into the post draw. Some acrid notes develop as the last third progresses. After the re-light, most of the acrid components fall away. Some chocolate comes through the retrohale, under some earth, as the third moves to the halfway point. The acrid character comes back on every few draws, distracting from the other flavor components.
Jiunn: The final third is unchanged from the second third. Still a ball of muddled flavors that is thin. The best part of it is on the retrohale, because it deepens all the flavors to the right level. Strength and body finishes the same medium. 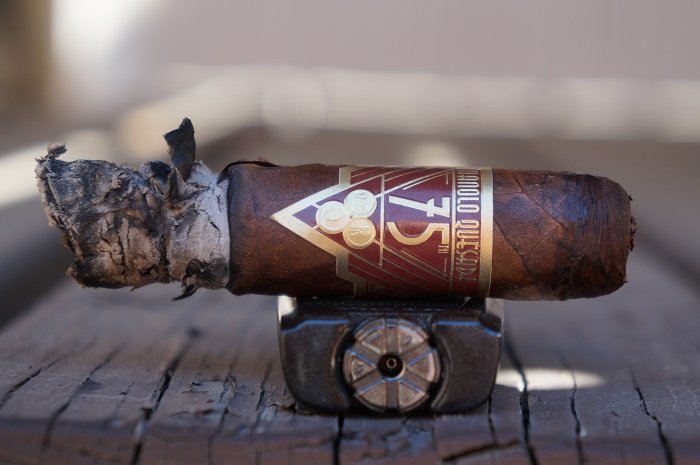 Aaron: The burn line was fairly straight, but the cigar did go out three times, requiring re-lights.
Seth: Burn was off and on throughout.
John: The burn was straight through the first and second thirds, with the burn stalling in the last third, eventually going out altogether and requiring a re-light.
Jiunn: The heavily oiled wrapper may have caused burn issues, as there were multiple re-lights involved. 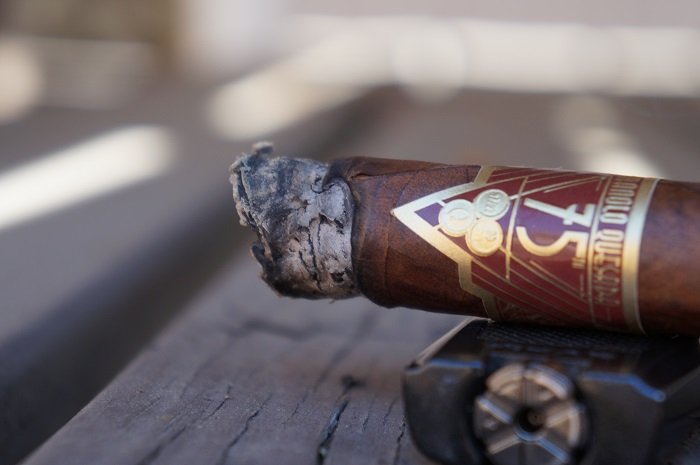 Aaron: The draw was slightly tighter than I prefer, but didn’t cause any issues with the smoking experience.
Seth: Draw was a little snug on my sample.
John: The draw was 1/2 notch towards the resistant spectrum, which puts it in the ideal range for an amazing draw.
Jiunn: The draw on the other hand was perfect, giving the ideal air flow and resistance.

Aaron: The cigar began with cedar that is lightly toasted and has a light dampness along with mild black pepper and light mustiness. Some earth joined in fairly quickly. The second third saw the dampness depart and a light wood bitterness join and maintained this profile the rest of the way. The Quesada Manolo Quesada 75th Anniversary had a good start, but lost steam from the second third on as some wood bitterness joined and lightly built up. This is a cigar I’d like to revisit down the road to see if I could dodge the burn issues and see if some age would improve the profile a bit. As it sits now, it’s not high on my list to smoke more of.
Seth: I found this Quesada Manolo Quesada 75th Anniversary to be an average blend, but I have learned to stop getting excited about Ecuadorian Corojo wrappers. I really think that if you swapped this wrapper, you would have a good blend. Maybe even increase the ring gauge. It was too weighed down with mineral spices and damp wood and earth notes. Construction was off too, probably because of the wrapper. Draw too because of the smaller ring gauge and the wrapper. I blame the wrapper.
John: The Quesada Manolo Quesada 75th Anniversary delivered some engaging and nuanced flavor combinations through the first and second thirds. Unfortunately, the last third became harsh and unbalanced, and I can’t help but think it was due to the cigar going out. The draw was perfect, and the burn went out in the last third requiring a re-light. I would definitely smoke the Quesada Manolo Quesada 75th Anniversary again. It’s a good representation of the kind of cigars that Quesada can blend. Total smoking time was 2 hours and 20 minutes on the nose.
Jiunn: A hype worthy anniversary cigar that doesn’t taste any better than regular production from the company’s regular production lines. After smoking through two examples of the Quesada Manolo Quesada 75th Anniversary, I found the flavors to be too thin and muddled in both cigars. As such, it’s an easy pass for me.