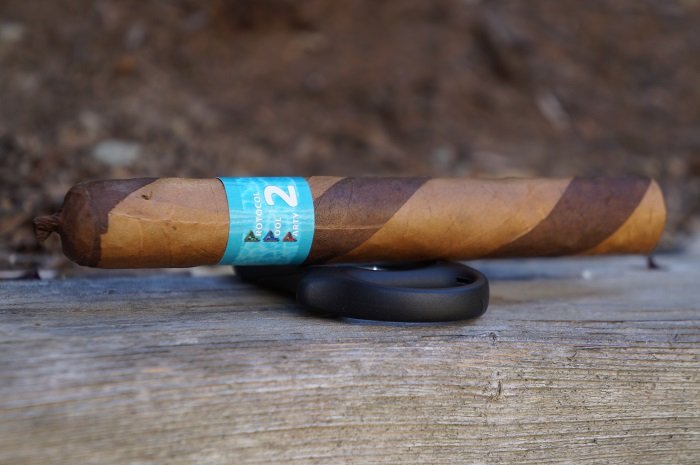 Aaron: The Protocol Pool Party Year 2 is a barber pole with light brown and dark brown wrappers. The light brown wrapper has some raised, knotty veins while the darker wrapper is smoother. The transitions are smooth and the head is well finished and has a twisted off stump. The band is lower quality than the brands core lines and is blue, looking like pool water and denotes the event it is made for. The aroma from the wrappers is musty hay, musty wood and some earth. The foot brings a mix of stone fruit and crushed red pepper. The pre-light draw brings musty cedar along with a mid-level spiciness on my lips.
Seth: The band on the Protocol Pool Party Year 2 is so bad it is great. In actuality, the wrapper textures are great. The contrast is great, and it is a well-done barber-pole. Aromas of raisins, tobacco, cedar and mesquite barbecue are present on the wrapper, and the foot has some sweet earthiness with currants and raisins.
John: The Protocol Pool Party Year 2 represents a lot of things you want in an event type cigar. The cigar is cellophaned, but does not have a UPC sticker, which makes sense if it isn’t being marketed for sale. It is a barber pole wrapper style, with a nipple cap complication. The barber pole is a light tan, on tan tobacco combination. For aromas, I was able to pick up on sweet barnyard and some mossy earth buried underneath. From the foot, there was a sweet raisin and tobacco combination. It’s a fun looking cigar, it makes me want to light it up.
Jiunn: The Protocol Pool Party Year 2 has a well applied barber pole. Veins are well pressed, seams tight, bunch and roll even and nipple head well wrapped. Aromas from the wrapper give plenty of cedar and sweet bread. Aromas from the foot give a similar vibe but with some added red pepper spice. Cold draw tells of cedar, hay and stale sourdough bread. 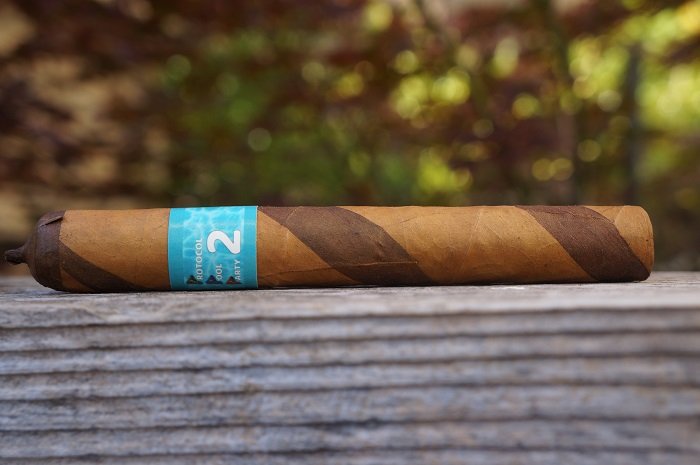 Aaron: The cigar begins with musty cedar, black pepper and hints of cinnamon. At a half inch in, the cinnamon has departed. At an inch in, the black pepper has mellowed a bit. The retrohale also carries the musty cedar with black pepper a bit behind. At an inch and a half, the musty cedar gains a toasted note. The strength in this third was right at medium.
Seth: The first third opens with some earthy notes. There are some cocoa qualities present, but there is a lot of black pepper with that. I am getting some faint wood and leather notes, and there is this sourdough bread finish. In terms of strength and body, I would classify the cigar as a solid medium.
John: The first third opened with baking spices at medium strength, and dry earth combined with mild minerality. The baking spices are even more intense through the retrohale, almost full strength, lingering all the way through the post draw on my lips. Some sort of tropical fruit sweetness joins the retrohale, but is run over by the fullness of the spices. Some musty wood later joins the retrohale, providing a contrasting funk to the fruit. I’m not sure if I like it, but it is interesting. Smoky earth, approaching a peated earth intensity comes into the post draw by the 20 minute mark. That smoky earth starts to push into the main profile 30 minutes in. As the first third progresses, the earth has moved to the front of the profile, at medium strength, by the halfway point.
Jiunn: The first third has that great La Zona style of profile I like. Deepness in red pepper spice and sweetness in roasted nuts and bread. There’s a tinge of sharp minerals, but as long as it stays in a relatively immaterial fashion, it’ll be fine. Retrohaling scorches the nostrils with more red pepper spice but also is creamier and sweeter. The finish is short, with cedar and nuts. Strength is medium-full, body is medium. 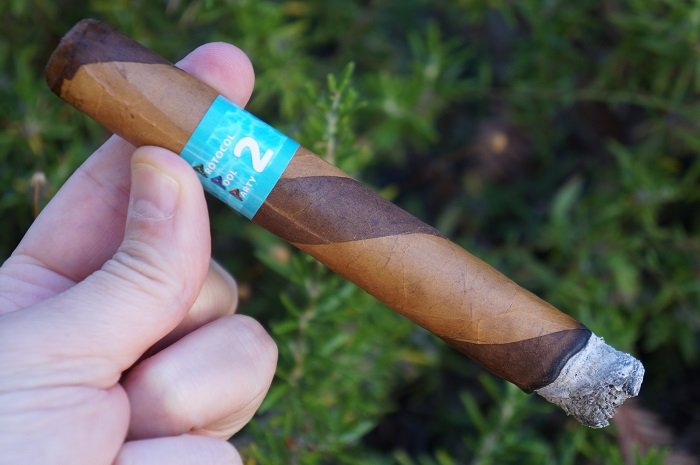 Aaron: The second third continues with the musty, toasted cedar up front with black pepper a little bit behind. The retrohale has the musty, toasted cedar up front with mild black pepper in the background. As the third comes to a close, the toast is fairly heavy on the musty cedar while the black pepper has moved a little further into the background. The strength in this third bumped up to slightly above medium.
Seth: The second third delivers a lot of earth and pepper notes. There are some woody qualities, leather as well, and the finish has some creaminess. It is not overly complex, but balanced. A classic barber-pole, but stronger. Medium to medium-full in strength and body.
John: There’s a combination of musty wood, mild, sweet fruit, and earth through the retrohale to start the second third. The profile becomes wood forward as it progresses, the musty and earth components falling to the background, leaving hay and mild dryness on the post draw. By the halfway point, some bitterness comes through, and the occasional burning paper note.
Jiunn: The second third still has that great mix of spice and sweetness. The strength does kick up a bit but it’s not putting me in a head spin. And luckily, the sharper minerals are still relatively subdued. Body remains medium. 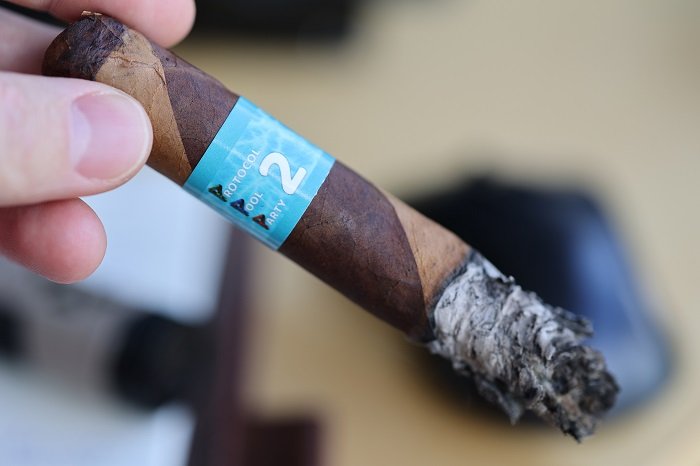 Aaron: As the final third begins, the black pepper is now quite mellow. At a half inch in, some dry earth joins the profile. The retrohale is now just musty and heavily toasted cedar. At an inch in, the toast transitions to a decent level of char. The cigar wraps up with the musty and heavily charred cedar, dry earth and mild black pepper. The strength in this third bumped up to medium-full.
Seth: The final third was right in line with that of the second third. I was picking up a lot of earth and pepper notes, and there were touches of dark chocolate and cream as well. I was picking up faint cedar notes on the finish, and like before it was a medium to medium-full cigar that really delivered those strong barber-pole profiles.
John: The last third has mild sweetness, hay and a burning paper note. Some mild dry hay and wood combination carry into the post draw. Medium intensity peat smoke comes through in the center of the profile as the last third settles in.
Jiunn: The last third’s pepper levels decrease but there is still a good amount of composure, giving off the same sweet and spicy mixture. Strength is almost full tilt while body remains a solid medium. 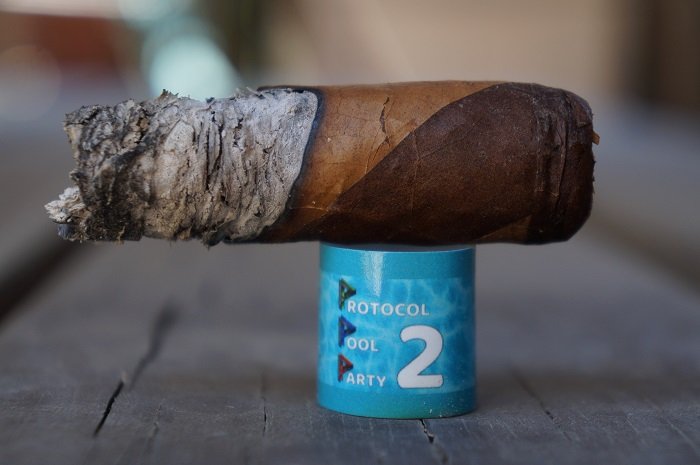 Aaron: The burn was fairly wavy as it seemed the burn struggled with the wrapper transitions. Two decent touch-ups were needed to keep things burning along neatly.
Seth: I had to relight a couple times, but overall, not a problem.
John: Two cigars were smoked to evaluate the burn performance. The first cigar had a good burn, with an uneven burn and two touch-ups required. The second cigar had a perfect burn, with no intervention required.
Jiunn: Burn performance was good aside from very flaky ashes. Ashes consistently fell off the cigar and on my shirt and pants. Probably not what you want at a pool party (I’m semi-joking). 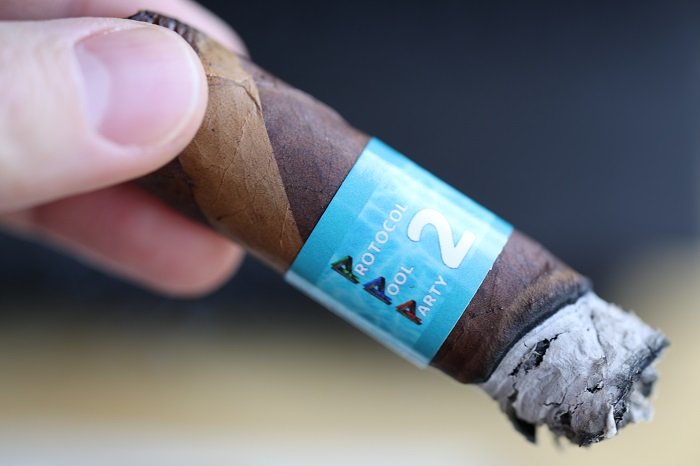 Aaron: The draw was perfect, with just the right amount of resistance that I prefer.
Seth: Draw was solid throughout.
John: Two cigars were smoked to evaluate the draw performance. The first cigar was well into the open spectrum, roughly 2-1/3 to 3 notches. The second cigar was right in the ideal zone between open and resistant.
Jiunn: The draw on the other hand was perfect, striking the ideal air flow and resistance.

Aaron: The flavor profile was pretty average through the first two thirds, focused around musty, toasted cedar and black pepper. It then dipped in the final third as the toast transitioned to char. The Protocol Pool Party Year 2 seemed to perform similar to the brands event and store exclusive blends which are a step down from their core lines. It was a cigar I was interested in due to the wrappers being used from their core lines I enjoyed, but it just didn’t deliver on that level. Fun to smoke and worth a try if you can get one since it’s an event exclusive, but not something I see myself returning to.
Seth: The Protocol Pool Party Year 2 is a good barber-pole. I typically do not think too highly of barber-pole offerings, but this was good. It had a nice strength and body to the cigar, and you could pickup the wrappers throughout. I would have liked to get more complexity with the blend, and I think that would have elevated the cigar dramatically, but I was happy with it being a barber-pole. I would purchase and smoke this if I were at a Protocol event, but that is about all.
John: The Protocol Pool Party Year 2 was a fun presentation and I appreciated the opportunity to smoke two of them for review. Evaluating them as if they were a cigar available to purchase at your local B&M might not seem fair, but it’s what we do over here at Developing Palates. In terms of flavor performance, I found the overall flavor profile to be average consistently through the experience. I don’t know whether the two wrappers were responsible, but I was definitely left with the impression of two distinctly different flavor profiles that sharply contrasted each other. The first cigar reviewed seemed to struggle a bit with draw and burn, while the second cigar was flawless. I would smoke another Pool Party Year 2, but I would reserve it for a Protocol party function. Total smoking time averaged 1 hour and 55 minutes.
Jiunn: Back to the good stuff. The Protocol Pool Party Year 2 is the wheelhouse of La Zona that I really enjoy, giving richness in spice and added sweetness. I don’t recall a new release that fit this mold in quite some time. Just make sure you eat some food or have some soda nearby, because this is a bit of a ringer.