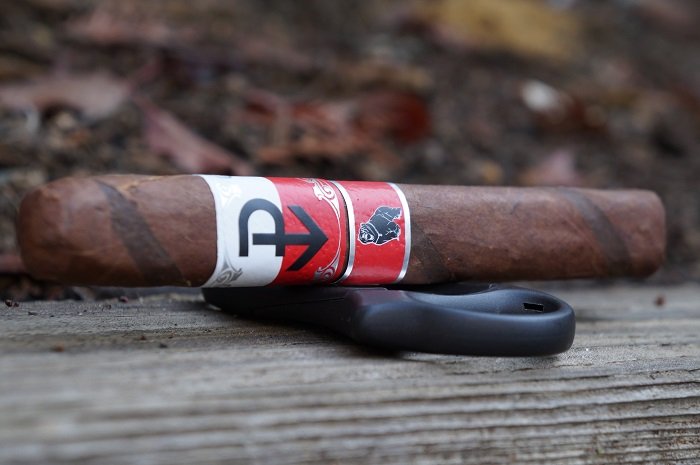 Aaron: The rectangle pressed Powstanie Wojtek 2021 Limited Edition is a barber pole, with the mostly medium brown with lightly raised veins wrapper being exposed the most and a quarter inch wide dark brown wrapper showing through. The seams are pretty decently raised and the caps are applied OK. There are two bands, with the primary being white, red and silver and carrying the brand logo and the secondary band being red and silver with an image of a bear in black and white. The aroma from the wrapper is a mix of wood and earth while the foot brings more wood and light, creamy coffee. The pre-light draw brings an airy, sweet cedar.
Seth: The Mexican San Andrés and Ecuadorian Habano are very close in coloring on the Powstanie Wojtek 2021 Limited Edition. You can see the barber pole, but it is subtle. Medium sized veins that are noticeable to touch are present throughout the cigar. The cigar is firm in hand and has a slightly gritty texture. Aromas of rich earth, spices, strong tobacco and damp wood on foot and wrapper.
John: The Powstanie Wojtek 2021 Limited Edition comes in cellophane, and there is no UPC sticker. It initially appeared to have a large single band, but is actually double banded with a primary band as the Powstanie logo and a secondary band with the Wojtek symbol. For additional complications the cigar is box pressed, and also is an almost barber pole style with a thin band of wrapper tobacco accenting the main wrapper in a spiral.
Jiunn: The Powstanie Wojtek 2021 Limited Edition has an overall rustic, copper like Colorado Red with the flare of Colorado strips. Veins are well pressed, seams tight, bunch and roll even and head well wrapped. Aromas from the wrapper tell cedar and hay. Aromas from the foot give the same but with a nice pop of white pepper spice. Cold draw gives cedar and hay. 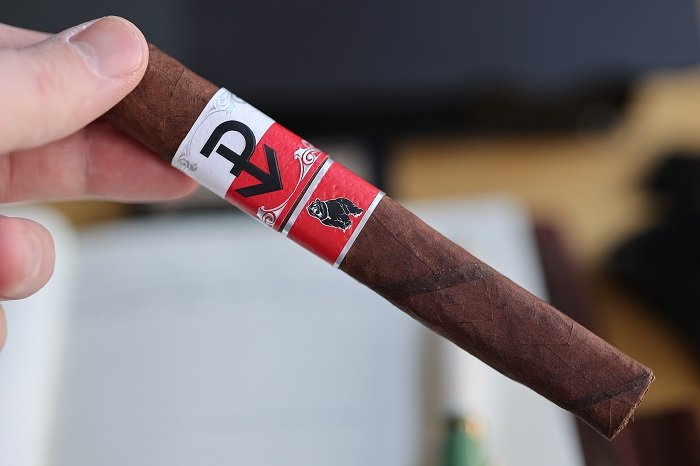 Aaron: The cigar begins with toasted wood, baking spice and light mustiness. At a half inch in, the mustiness picks up a bit. The retrohale is musty, toasted wood with light baking spice. At an inch in, a light, creamy coffee joins the profile. At an inch and a half, the baking spice transitions to black pepper. As the third wraps up, the profile is musty, toasted wood, with black pepper a bit behind and light, creamy coffee in the background. The strength was right at medium.
Seth: The first third starts out by delivering some leather, dry wood and pepper spice flavors. I am getting some meaty qualities as well, and there are some dry earth flavors too. Some faint coffee notes on the finish. Medium-full to full in strength and body.
John: The first third opened with mildly toasted nuts, bread and finished with a nut and cedar combination. The post draw evolves into a dry cedar that lingers between each puff. Some sweet meatiness comes through the retrohale at light-plus intensity. As the first progresses, baking spices at light-plus join the post draw to add complexity. Some time later, toasted earth joins in at the finish of each draw, settling on the post draw. That earth continues to intensify going to medium, almost medium-full by the halfway mark. By the halfway mark it has brought some minerality with it.
Jiunn: The first third showcases dry cocoa and baking spices. My palate is fairly dry and is filled with the tannins of the cocoa. Retrohaling gives deeper spices in the form of dry red pepper spice, but also provides the same dry cocoa and a hint of roasted nuts. Strength is medium-full and body is medium. 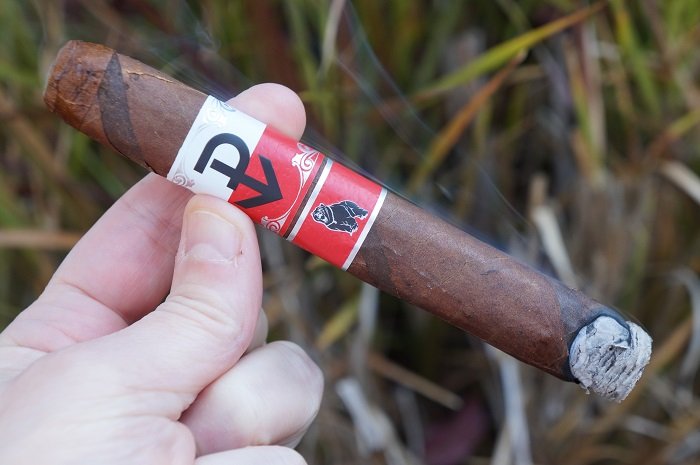 Aaron: As the second third begins, the black pepper mellows a bit. At a half inch in, the black pepper picks back up to its original level and the toast level becomes a bit heavy. At an inch in, the creamy coffee is barely holding on. The retrohale is musty, toasted wood. As the third comes to a close, the profile is musty, heavily toasted wood with black pepper a bit behind and the creamy coffee having dropped out. The strength in this third bumped up to slightly above medium.
Seth: The second third shows more complexity, and I am picking up stewed meat qualities, potatoes, coffee, leather, dry wood, peppery spices and bay leaves. Medium-full in strength and body. Lovely second third.
John: The second third starts with toasted earth, with lingering earth and wood through the post draw. Syrupy sweetness settles into the center of the profile along with some wood as it settles in. By the halfway mark, chocolate comes into the retrohale at medium-minus intensity. Baking spices join the retrohale and finish at medium strength through the bottom half.
Jiunn: The second third becomes noticeably dryer. The dryness requires a lot of sips of water and takes over the cocoa and baking spices. Strength and body is unchanged at medium plus and medium. 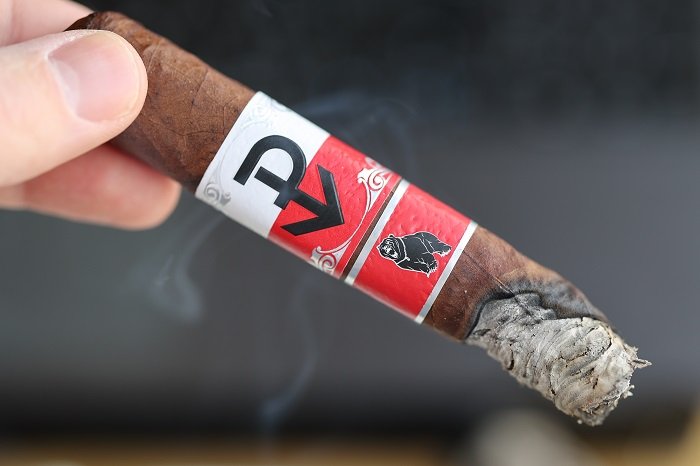 Aaron: The final third continues with the musty, heavily toasted wood up front, while the black pepper becomes a bit dull and mellows slightly. At a quarter inch in, a light vegetal note joins the profile. At a half inch in, the mustiness becomes fuller. The retrohale now has the mustiness up front with toasted wood behind. As the cigar wraps up, the musty, heavily toasted wood was up front with dull black pepper a bit behind and light vegetal note in the background. The strength in this third bumped up top medium-full.
Seth: The final third delivers a flavor profile of rich earth, coffee, leather, dry wood and spices. I am getting some pepper notes with tobacco and meat qualities. Minerals as well on the finish. Medium-full in strength and body.
John: Sweet earth and baking spices carry the profile into the last third, as earth and wood finish into the post draw, with a delayed baking spice punch. Earth settles on the tip of my tongue between each draw as the last third progressed. Not long after, sweet baking spices join the center of the profile, along with some earth.
Jiunn: The main difference between the second third and last third is strength. The strength is now full. In terms of flavors, no changes. It’s still very dry with cocoa and less baking spices. Body remains medium. 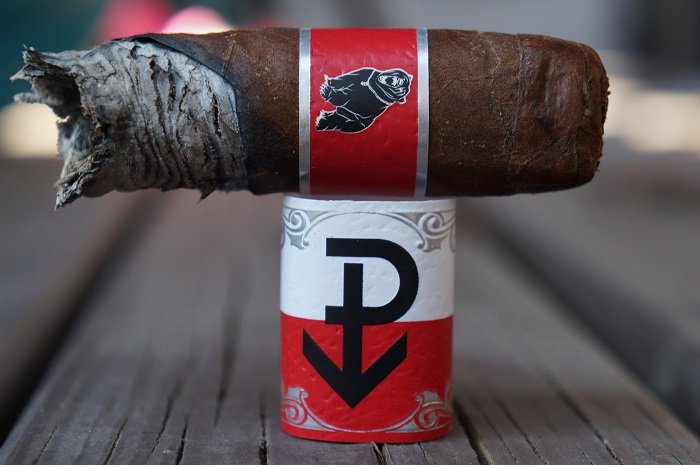 Aaron: The burn was a bit wavy throughout, likely due to the wrapper configuration. The cigar also went out twice, requiring re-lights.
Seth: The burn was a little wavy throughout. Sometimes it smoked fine, and sometimes not.
John: The burn starts straight, with a small section of wrapper not combusting, eventually self correcting. The burn is offset through the second third, self correcting again. Halfway into the second third, the cigar goes out, requiring a re-light.
Jiunn: Burn performance was overall very good. The only negative was a couple quick touch-ups to get the wrapper burn back on track. 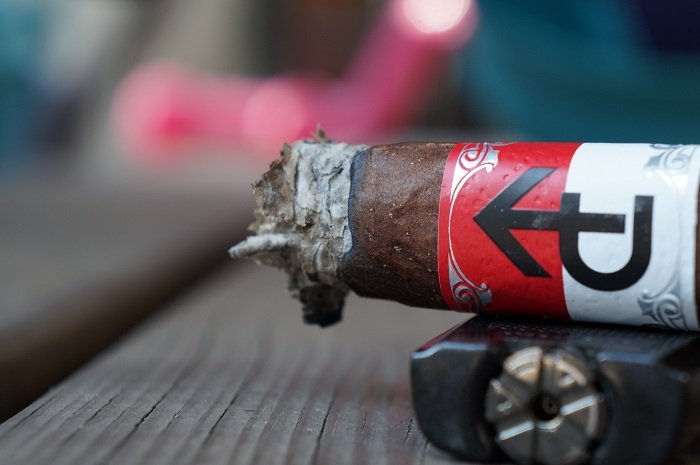 Aaron: The draw was perfect, with just the right amount of resistance I prefer.
Seth: Draw was great from beginning to end.
John: The draw was roughly 2-1/2 to 3 notches towards the open spectrum.
Jiunn: The draw was flawless, giving the ideal air flow and resistance.

Aaron: The cigar began with toasted wood, baking spice and light mustiness. A light, creamy coffee joined in a bit later and the baking spice transitioned to black pepper. The second third saw the coffee note drop out. The final third saw the pepper become dull and a light vegetal note joined in. The burn was wavy and two re-lights were required. The Powstanie Wojtek 2021 Limited Edition had a nice start and the creamy coffee was a nice supporting note. The second third dropped down as the toast level became heavy and maintained that level for the rest of the cigar. Overall, the cigar was fairly average as it couldn’t hold on to that profile from the first third. With the high price point, it’s not likely that I’d revisit this all that often.
Seth: The Powstanie Wojtek 2021 Limited Edition delivered a flavor profile that was decent to start, really good in the middle and decent on the finish. Those stew notes were fantastic. It had that strong leather, earth and spice profile I was expecting throughout, but it was never too much. Construction was not always great, but I believe that had to do with the wrappers. I would probably smoke a blend of this nature more during the summertime, just because of the flavors delivered, but this is a blend that will do well for the RoMa smokers. If you’ve smoked Powstanie blends, you will like this cigar.
John: The Powstanie Wojtek 2021 Limited Edition started with an interesting line up of flavors through the first third, but as it progressed it became earth dominant and somewhat unbalanced. While still pleasant to smoke, it didn’t get back to the initial levels of engagement from the first third. The natural comparison for me is the 2019 Wojtek which I thought was a Top 25 cigar release for 2019. The draw was somewhat into the open spectrum and the burn required a re-light. The 2021 Wojtek wasn’t for me, but Powstanie makes cigars that I typically enjoy and I’ll be looking forward to the 2022 Wojtek Limited Edition. Total smoking time was 1 hour and 44 minutes.
Jiunn: Not my favorite of Powstanie offerings. This Powstanie Wojtek 2021 Limited Edition was too dry and didn’t have the cocoa carry the profile enough. The dryness with full strength (by final third) made the profile that much more less enjoyable. With added softer notes of sweetness and less dry mouth, it would have made for a dramatically better flavor profile. Will pass on this.