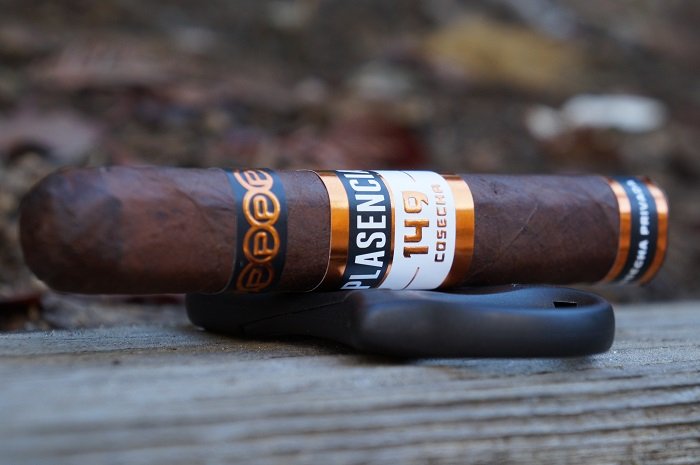 Aaron: The wrapper on the Plasencia Cosecha 149 La Vega is dark brown and has a couple of lightly raised veins present. The seams are a bit raised and the head has a top cap that is applied like a poorly fitted toupee. There are three bands, with the primary being in the middle of the cigar and carrying a white, brown and copper color combination and denoting the brand and line. The band above is black and copper and carries the brand logo while the foot band denotes Cosecha Privada. The aroma from the wrapper is damp wood and earth while the foot brings wood and stone fruit sweetness. The pre-light draw brings cedar and a fairly hollow cherry sweetness along with some mild spice on my lips.
Seth: Lovely pressed, and firm throughout, the Plasencia Cosecha 149 La Vega is finished with a great Colorado Maduro wrapper. The cigar is fine in texture, and the veins present throughout are small. Coloring of dark chocolate. Aromas of raisins, milk chocolate, cream and earth.
John: The Plasencia Cosecha 149 La Vega comes in cellophane, with a UPC sticker that remains intact on the open flap. The cigar itself is soft box pressed, and is triple banded. The primary band is a slim gold P symbol repeated, with the secondary band, which says ”Plasencia 149 Cosecha’, acting as as the main band. The last band is a foot band that indicates ‘Cosecha Privada’. Aromas from the wrapper included raisin, fermented tobacco, chocolate and some citrus. From the foot, I was pickup on dates and wood.
Jiunn: The Plasencia Cosecha 149 La Vega has a beautiful oily Colorado wrapper shade showing even traces of tooth. Veins are well pressed, seams tight, bunch and roll even and head well wrapped. Aromas from the wrapper tell of heavy barnyard, white pepper and roasted nuts. Aromas from the foot give sweet roasted nuts and ample white pepper spice. Cold draw gives hay and white pepper spice. 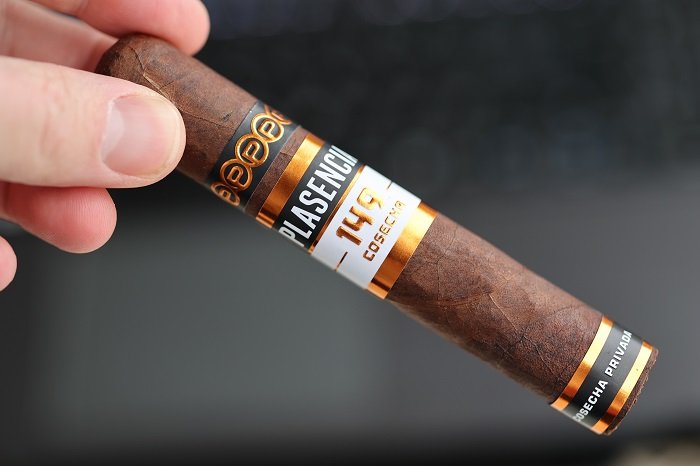 Aaron: The cigar begins with toasted oak and bold black pepper. At a quarter inch in, some dark earth joins the profile. The retrohale is toasted oak and zinging black pepper. At three quarters of an inch in, the earth becomes a bit dry as the black pepper also mellows. At an inch in, a light mustiness joins the profile. As the third comes to a close, the toasted oak and dry earth are even up front, with the mustiness a bit behind and the black pepper in the background. The strength was slightly above medium.
Seth: The first third starts out with sweet spice notes that are paired with currants, herbs, coffee and rich earth. It is very filling, and I would classify the cigar as medium in strength and medium-full in body.
John: The first third started with creamy baking spices, which gave way to spicy wood. Red pepper flake sits on my lips between each draw. Earthy espresso takes home in the center of the profile. As the cigar progressed, spices became more defined as red pepper flake at medium-plus intensity. The espresso moved up to medium intensity not long after. Approaching the halfway point, stewed raisin sweetness comes through at the end of each draw.
Jiunn: The first third shows a complex delivery of spices. Baking spices, white pepper spice and a hint of Chinese five spice. The spice notes are well complemented by naturally sweet and creamy roasted nuts. Retrohaling is intense, as there is a big pop of white pepper spice. The finish shows dry red pepper spice and cedar combination. Strength is medium-full, and body is medium. 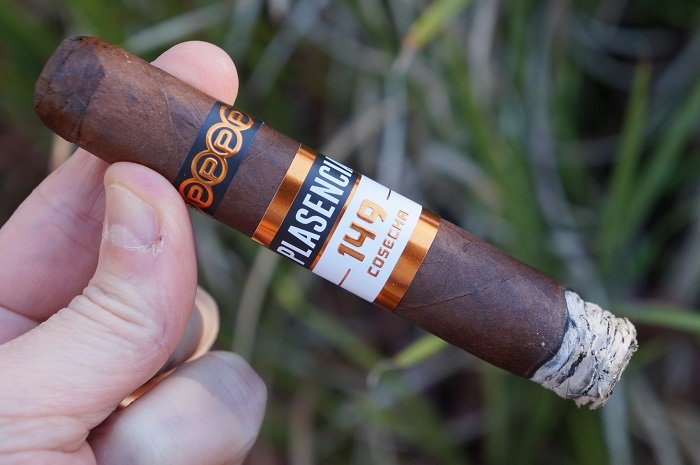 Aaron: As the second third begins, the toasted oak, dry earth and mustiness are now all even up front. At a quarter inch in, the dry earth takes a slight lead in the profile. The retrohale has the dry earth up front with toasted oak and light mustiness behind. At an inch in, all of the components aside from the black pepper are even again. As the third wraps up, the overall profile is now fairly dry. The strength remained at slightly above medium.
Seth: The second third delivers a flavor profile of herbs, earth, pepper, spices and wood. Like the first third, it is very filling. I would still classify the cigar as medium in strength and medium-full in body. Very nice cigar.
John: Syrupy sweetness greets me in the second third along with medium intensity spices, and wood to finish. The baking spices also sit in the middle of each draw at medium intensity. Stewed raisin sweetness comes back, in the middle of the draw, by the halfway point.
Jiunn: The second third holds true to the first third. Still a unique and complex spice delivery with just enough creamy and nutty sweetness to tie it together. Strength and body is still medium plus and medium, respectively. 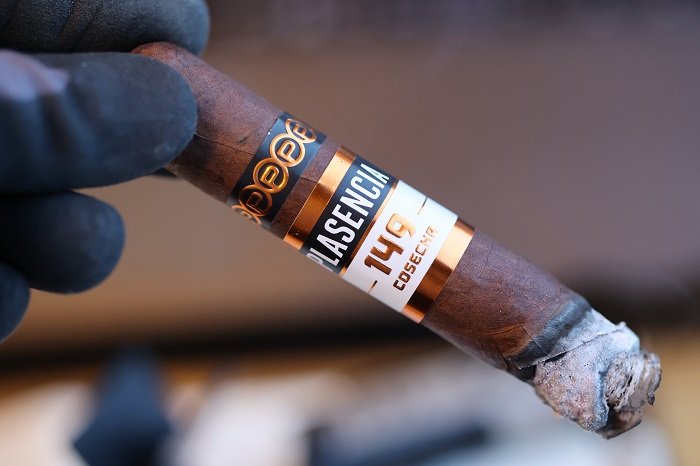 Aaron: The final third continues with the toasted oak, dry earth and mustiness all even up front and light black pepper in the background. At a quarter inch in, the black pepper has disappeared. The retrohale is now just musty toasted oak. The cigar wraps up with maintaining the even mix of toasted oak, dry earth and mustiness with the overall profile being fairly dry. The strength in this third bumped up to medium-full.
Seth: The final third delivers a flavor of charred wood, earth, pepper, spices and herb qualities. It is more medium-full in strength and body in this third, and it has a strong finish.
John: Baking spices lead the profile into the last third, with light wood to finish. Creaminess comes into the retrohale as it settles in, with earth hitting on the post draw. That earth moves into the center of the profile as it progresses, with mild espresso joining at the halfway point.
Jiunn: The final third casts an overall harsh spice to the profile that is most evident on the back of the throat. This change alone changes the profile from being “good” to “average.” Strength and body finishes the same medium-full and medium. 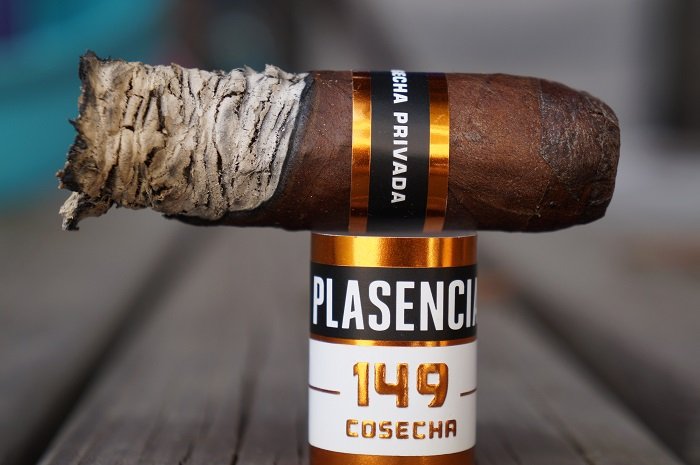 Aaron: The burn line was a bit wavy at times but self-corrected while the cigar did go out once, requiring a re-light.
Seth: Wavy at the beginning, but it corrected itself and finished strong.
John: The burn started out fairly straight, becoming uneven enough through the first third that it required a touch-up. It was uneven through the second third but did not require intervention. By the last third, it went out, requiring a re-light.
Jiunn: Burn performance was a couple notches below perfect. This was in large part due to wrapper burn issues, causing a couple relatively significant touch-ups. 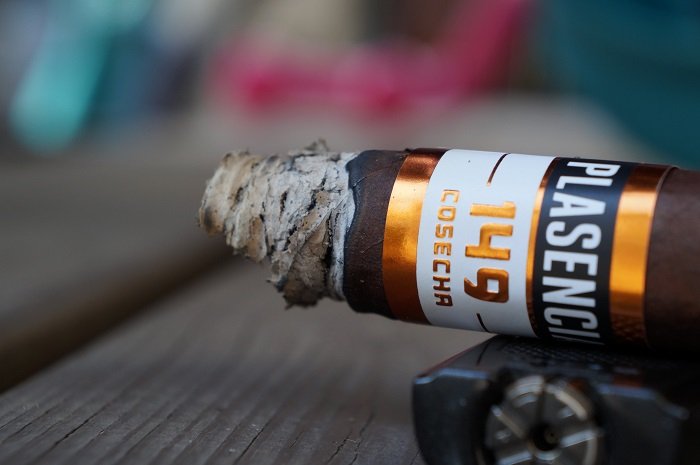 Aaron: The cigar began with toasted oak and bold black pepper. Some dark earth joined in fairly quickly and then it dried out. Some mustiness joined a bit later. The second third saw the black pepper fade back. The final third saw the black pepper depart. Construction was good aside from a wavy burn and a single re-light. Overall, the Plasencia Cosecha 149 La Vega was quite average. Very earth and toasted oak forward, so if you like that profile, you’ll enjoy this. For me, it was too much of that earthy profile and being overly dry. Quite a bit of strength as well. Not something I really see myself coming back to.
Seth: The Plasencia Cosecha 149 La Vega was a good cigar and one to my liking. It shows some diversity in Honduran tobacco in terms of flavors delivered. It smokes like a Honduran, but it does not deliver that Honduran flavor profile that we often smoke. It has a long finish, very filling, and it is a full cigar in terms of body and strength. The flavors of herbs, earth, pepper and wood were enjoyable, and when you could pick up the coffee notes with that, the cigar was elevated. I did have some issues with the burn initially, but in the end, it corrected itself out. I like that all the tobacco in the cigar is from 2014. It is cool to see a vintage cigar in that sense, and I would like more of these.
John: The Plasencia Cosecha 149 La Vega provided a medley of complex flavors that harmonized well, and it remained consistently complex for every third. The draw was perfect, but the burn did struggle somewhat with a touch-up and re-light required. I will definitely return to the Cosecha 149 La Vega, I think it’s a standout release for the past 2 years. Total smoking time was 1 hour and 57 minutes.
Jiunn: I equate the experience with the Plasencia Cosecha 149 La Vega to drinking a nice high rye bourbon, focusing on a nuanced blend of spices, but also having enough softer flavors of roasted nuts. The spice delivery was unique and not your traditional spices, centered around baking spices, white pepper spice and a hint of Chinese five spice. Well done and will be back for more.