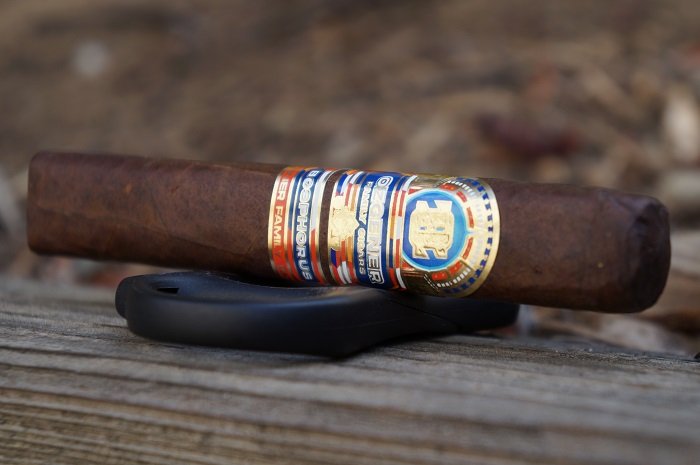 Aaron: The wrapper on the rectangle pressed Ozgener Bosphorus B-52 is dark brown with a little bit of marbling and has some lightly raised veins present. The seams are smooth and the top cap has some lifting edges. There are two bands, both carrying a number of colors. The primary band denotes the company name while the secondary denotes the line and company name. The bands are a bit hard to read with the gold used in the lettering. The aroma from the wrapper is a hay forward barnyard while the foot brings cedar, fire cured smokiness and baking spice. The pre-light draw brings cedar and fire cured smokiness along with a mid-level spiciness on my lips.
Seth: Great looking cigar! I love the colors on the bands, and they pop against the marbled Colorado wrapper. Small to medium sized veins throughout, the Ozgener Bosphorus B-52 is pressed well and the cigar is firm in hand. Dark Colorado coloring. Aromas of barnyard, leather, coffee, cocoa and earth.
John: The Ozgener Bosphorus B-52 comes in cellophane and has a UPC sticker which tears in half when the cellophane is opened. For artisanal complications, the cigar has a sharp box press shape to it. The cigar features two bands that are applied to look like one large band. The primary band indicates Ozgener Family Cigars and the secondary band indicates Bosphorus. Aromas from the wrapper included mild barnyard, earth and aged wood. From the foot, I was picking up on sweet earth and aged wood. One thing to comment on is that the cigar felt underfilled through sections.
Jiunn: The Ozgener Bosphorus B-52 has an even Colorado Maduro wrapper shade. Veins are well pressed, seams tight, bunch and roll even and the head is well wrapped and capped. Aromas from the wrapper tell primarily dry cedar wood. Aromas from the foot tell of rich white pepper spice and cedar. Cold draws reveal hay and cedar. 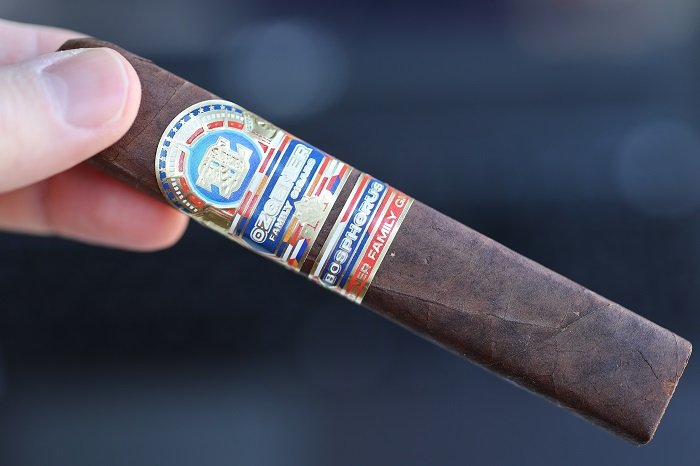 Aaron: The cigar begins with heavily toasted oak, black pepper and light smokiness. At a quarter inch in, some light earth joins. The retrohale is toasted oak and zingy black pepper. At an inch in, the heavily toasted oak is just playing at the edge of a charred bitterness. As the third comes to a close, the profile is heavily toasted oak up front with black pepper and earth a bit behind and light smokiness in the background. The strength was right at medium.
Seth: The first third starts out with some nice wood, pepper and leather notes. Bits of earth and nuts present as well, and I am getting this faint berry/stone fruit quality on the finish. Medium-full in strength and body.
John: An earth and leather combine to open the first third as leather lingers into the post draw at medium strength. Some mild spices join the post draw as it continues. The initial impressions are a pleasant flavor profile but not particularly dynamic. Some mild wood at the end of the draw combining with sunflower seeds into the post draw at roughly the 25 minute mark.
Jiunn: The first third brings a decently melded flavor profile centered around cocoa, dried red pepper spice, cedar and a hint of barnyard. Retrohale gives intense dried red pepper spice, with roasted mixed nuts to follow. The finish is medium in length with a lasting cedar wood. Strength and body is medium. 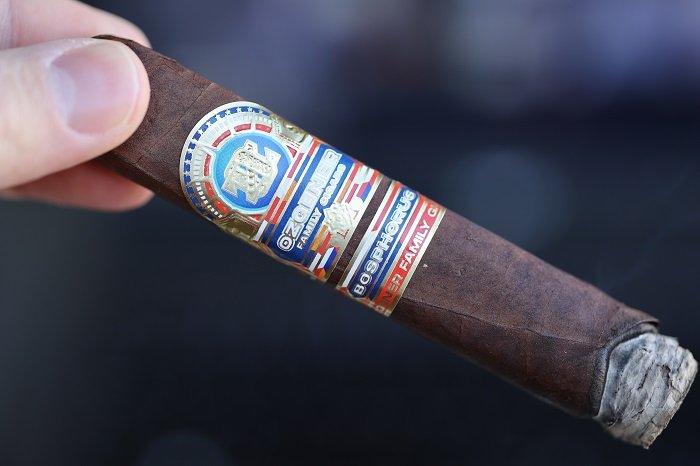 Aaron: As the second third begins, the earth has increased a bit. At a half inch in, there is now a steady dose of lightly charred bitterness present. The retrohale is now toasted oak and earth. As the third comes to a close, the profile is heavily toasted oak up front with earth right behind and light black pepper and charred bitterness in the background. The strength remained at medium.
Seth: The second third is in line with the first third and I am getting some earthy, pepper, stone fruit, wood and leather notes. Nice core profile that is hearty. Medium-full in strength and body.
John: The second third has a similar profile as the first third, with mild, sweet wood, light-plus leather and some earth into the post draw. Earth and light-plus baking spices are present through the retrohale. Some post draw tannic wood is present in the bottom half.
Jiunn: The second third shows more dried red pepper spice. The spice is paired with a unique celery seed. The combination works quite well. The increase in the pepper spice also lengthens the finish. Strength and body remains medium. 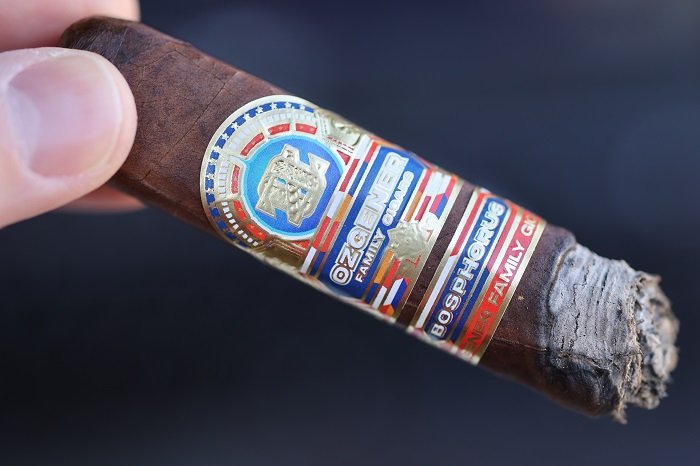 Aaron: As the final third begins, the charred bitterness has increased a bit. The retrohale remains toasted oak and earth. At three quarters of an inch in, the charred bitterness is now very light. As the cigar wraps up, the profile is heavily toasted oak up front with earth a bit behind and light black pepper and charred bitterness in the background. The strength remained at medium.
Seth: The final third is right in line with the second and first. This cigar is consistent. Not overly complex, but has a nice profile of leather, earth, wood, pepper and fruit. Medium-full in strength and body.
John: Slightly tannic wood moves the cigar into the last third. Mild earth returns to the end of the draw. There isn’t much more in the way of flavor development.
Jiunn: The final third loses out on the cocoa note and overall becomes a tad too dried red pepper spice dominant. No bitterness forms, but the complexity is a notch lower. Strength and body finish the same medium. 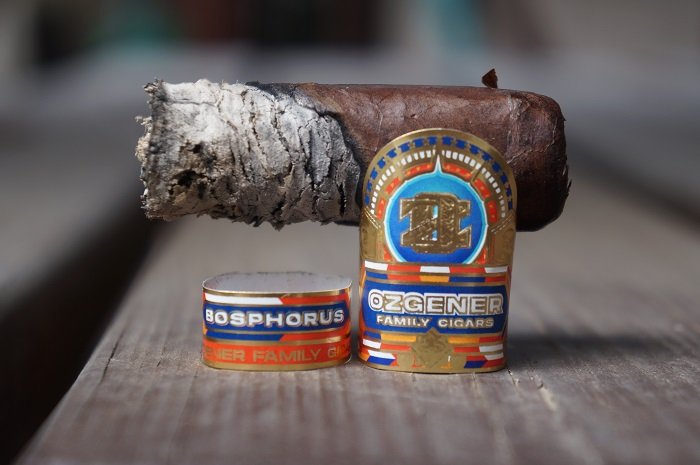 Aaron: The burn was a bit wavy at times and the cigar went out once, requiring a re-light. The ash held on in inch and a quarter increments.
Seth: Beautiful burn.
John: The burn was relatively straight through the first third, with a rapid 46 minute burn time to the halfway point of the cigar. The burn became uneven in the second third, eventually requiring a touch-up intervention in the last third.
Jiunn: The burn performance was great. Overall even burn, cool burning temperature and good smoke production. 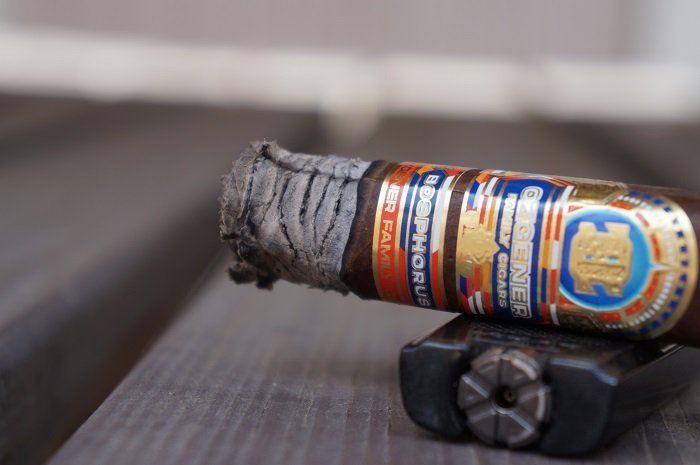 Aaron: The cigar began with heavily toasted oak, black pepper and light smokiness. Some light earth joined in fairly quickly. The second third saw some charred bitterness join in. That charred bitterness increased a bit in the final third and then became light again. The Ozgener Bosphorus B-52 started fairly average, but once the charred bitterness set in in the second third and hung on through the rest of the cigar, it wasn’t a great experience. This is a bummer for an initial offering from a new brand. I’m curious as to what the others think, but it’s not something I’m eager to revisit, but I’d like to see what their second line performs like later this year.
Seth: This is like reviewing a limited edition, but not having the cigar be a limited edition. I would have picked these up if I saw them at a shop I was in, try a different size, but in the end there was nothing that really stood out for me on the Ozgener Bosphorus B-52. Great looking cigar, but an average smoking expereince.
John: The Ozgener Bosphorus B-52 didn’t do much in the way of getting my attention for a brand owner coming back into the industry. The flavor profile was pleasant throughout, but did not provide any flavor combinations or intensity that I would describe as particularly engaging. The burn was almost perfect with a single touch-up, and the draw was perfect. Unfortunately, the cigar had sections that were easily detectable as underfilled which I believe led to the very quick smoking time of 1 hour and 15 minutes. Cigars are a handmade product and with the amount that we review, these sorts of issues are bound to come up from time to time. I’d be interested in trying this again to see if the experience would improve with a properly constructed cigar.
Jiunn: For a brand that I’ve never heard of, this Ozgener Bosphorus B-52 is an overall nice gateway into the brand. The second third was the highlight, giving me a good mix of bold and soft flavors of cocoa, dried red pepper spice and celery seed spice. I look forward to what this brand comes up with next.