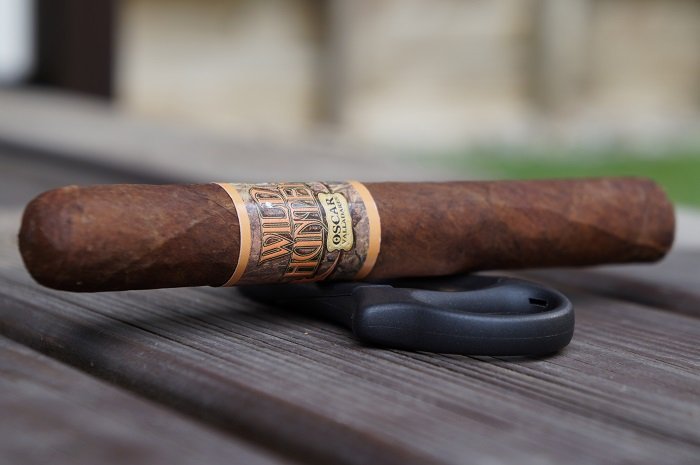 The wrapper fits the concept of the Oscar Valladares Wild Hunter Maduro well as it’s quite rustic with knotted, raised veins present and an interesting marbling that could pass as camouflage. The seams are smooth but visible due to some of the color variation. The head appears to be finished off with a double cap. The band has a forest backdrop with peach lettering and borders and has the company and line name. The aroma from the wrapper is cedar and faint barnyard while the foot brings slightly roasted peanuts along with some wood. The pre-light draw is a lightly sweet and spicy cedar. 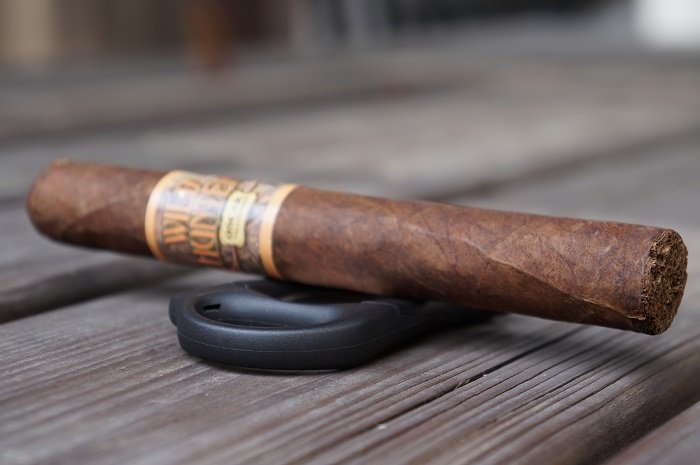 Overall, the Oscar Valladares Wild Hunter Maduro is poor in appearance. I’m going to be honest with you that the wrapper does not look great. It has this rustic faded brown coloring, some marbling throughout and it is coarse in texture with noticeable veins. On top of that are the bands, which are in “hunter’s orange” and camouflage. They are atrocious. I am picking up aromas of vegetation, earthy and sweet spices on the foot. There are some additional leather and pepper notes on the wrapper. 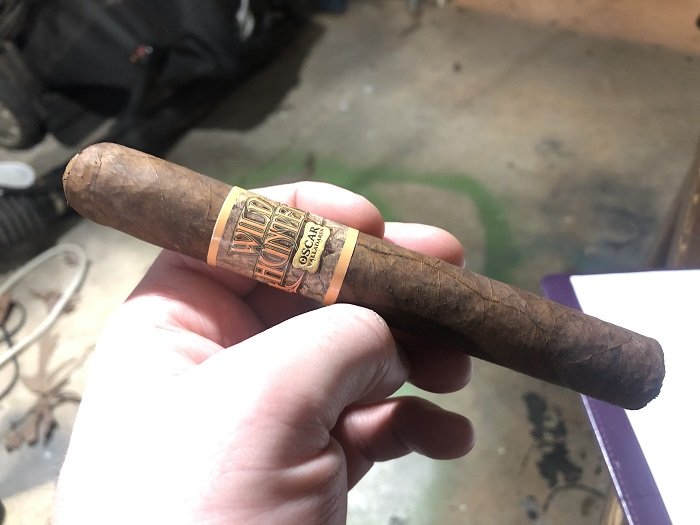 The Oscar Valladares Wild Hunter Maduro has a rustic, dark wrapper. The band is camo themed with an orange and brown motif. Nosing the cigar, I picked up a complex cedar on the wrapper, and light hay in the foot. Measuring the cigar with digital calipers, the ring gauge at the band and foot was exactly as specified. 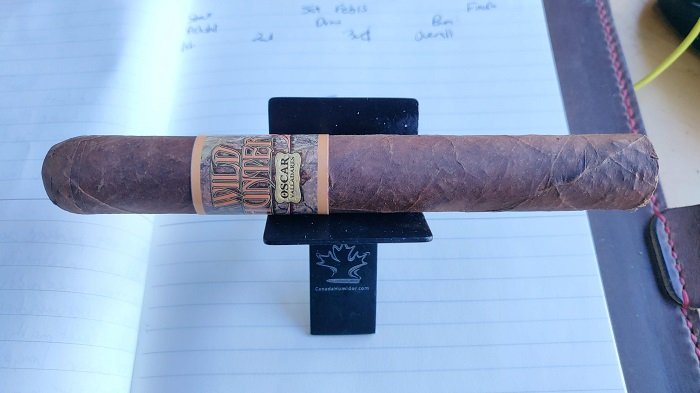 The cigar begins with oak, mustiness, paper and light chalkiness. At a quarter inch in, the profile is a bit drying on my palate. At three quarters of an inch in, the paper is now more of a cardboard note. The retrohale is a musty dry oak. At an inch and a quarter, the cardboard note leaves as a mild baking spice joins in. As the third comes to a close, a light dry earth joins the profile of musty oak with light chalkiness and baking spice. The strength in this third was mild-medium. 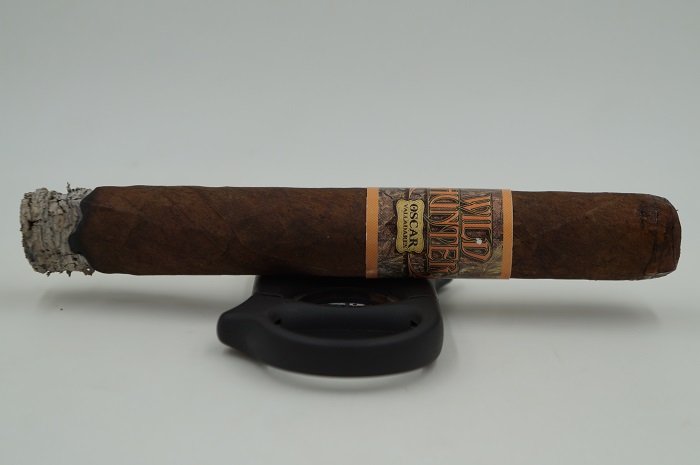 The first third begins with notes of mocha, earth and sweet spices. I am picking up some white pepper notes as well and it is all meshed together. It comes off in writing as a nice combination, but it is all joined together in a way that is not overly pleasant and the finish is of burnt paper. I would classify the cigar as being medium to medium-full in strength, body and flavors. 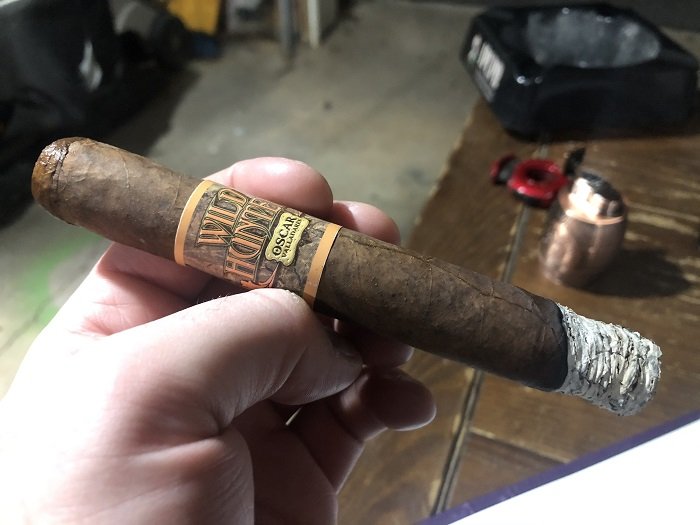 The first third begins with sweet nuttiness and hay, with a cedar finish. The nuttiness imparts an umami character to my palate. On the retrohale, creamy, mild spices along with that same nuttiness. As the cigar progresses, some stewed fruit and toasted earth develops on the retrohale. Later, dark earth joins the post draw. Fruit sweetness takes up in the middle of the profile as the cigar settles in, along with a general woodiness that serves as an accent across the flavor map. That cedar also mixes in nicely with the dark earth on the post draw, which eventually moves into the middle of the profile. 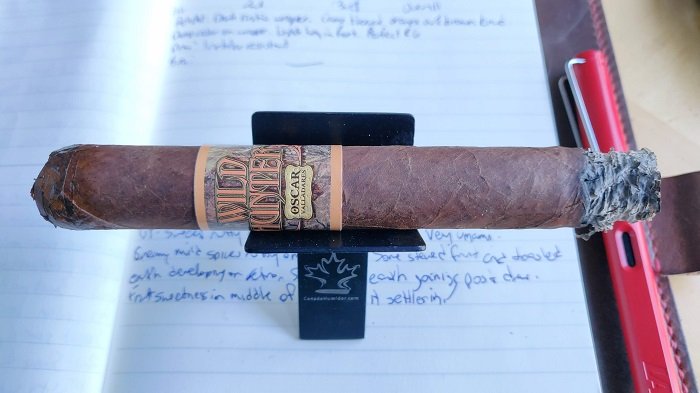 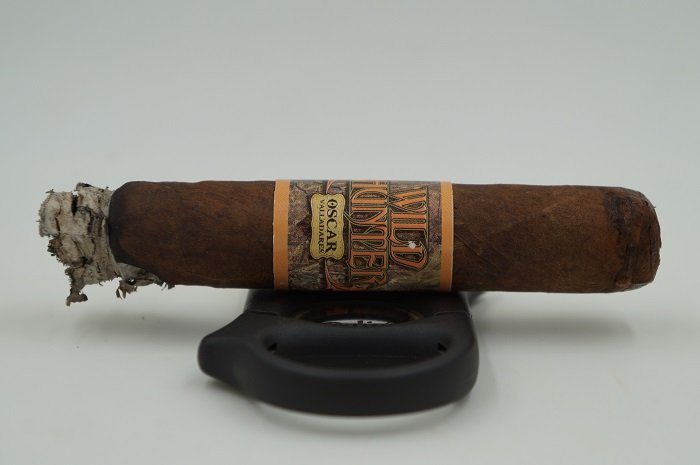 The second third is lacking what was present in the first third and I am getting some earth and sweet spice notes. The mocha has faded and the finish is of white pepper and burnt paper. There is some vegetation as well and it is not a great finish. Like before, the cigar is medium to medium-full in flavors, strength and body. 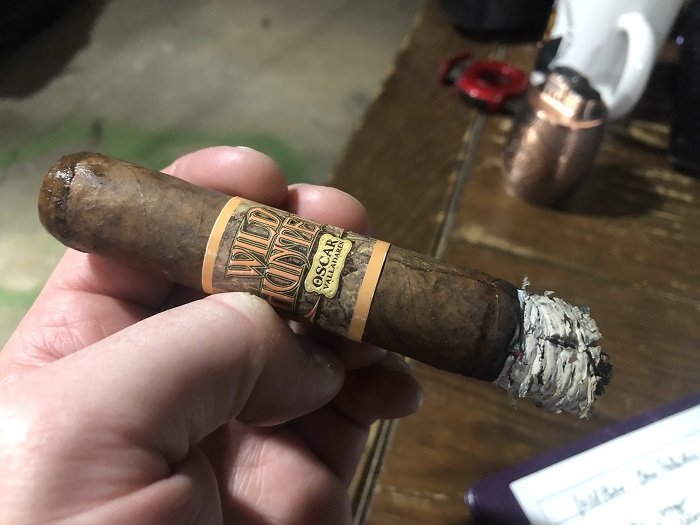 Initially, light cedar defines the profile moving into the second third. That toasted dark earth from the first third quickly moves into the center and post draw, with the post draw earth taking on a significant char. That char intensity fades somewhat as the cigar settles in. By the halfway point, the char has largely receded, with dry earth defining the post draw. That char returns in the bottom half of the third to finish each retrohale. Tannic cedar joins the post draw some time later. 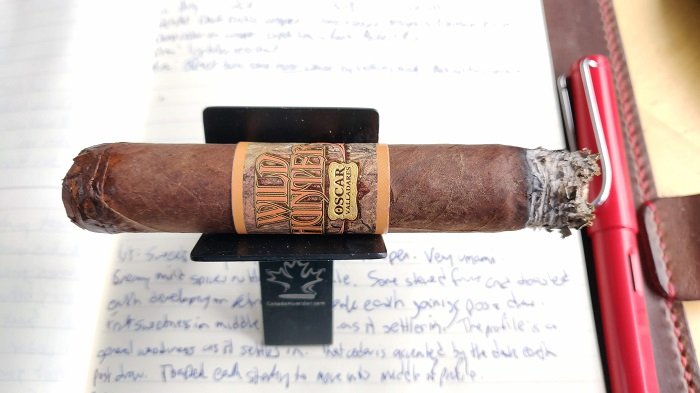 The final third begins with the musty oak and chalkiness up front and the dry earth slightly behind. The wood bitterness is no longer present. At a half inch in, a light vegetal note joins the profile. At an inch in, the oak gains a toasted note to go along with the mustiness. The dry earth and vegetal note are even in the background. The retrohale carries just a musty oak profile. At an inch and a quarter, the cigar warms up a bit and a pine note becomes present. The cigar wraps up with the pine note, mustiness and some dry earth. The strength in this third remained at slightly below medium. 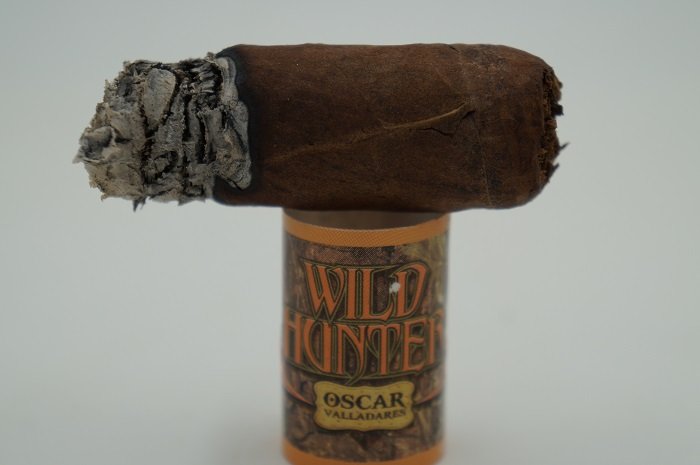 The final third delivers notes of burnt paper, vegetation, earth and pepper. It is at a medium-full level for strength, body and flavors and there is not much to report. It has gone downhill from the second third which is below the first third level. 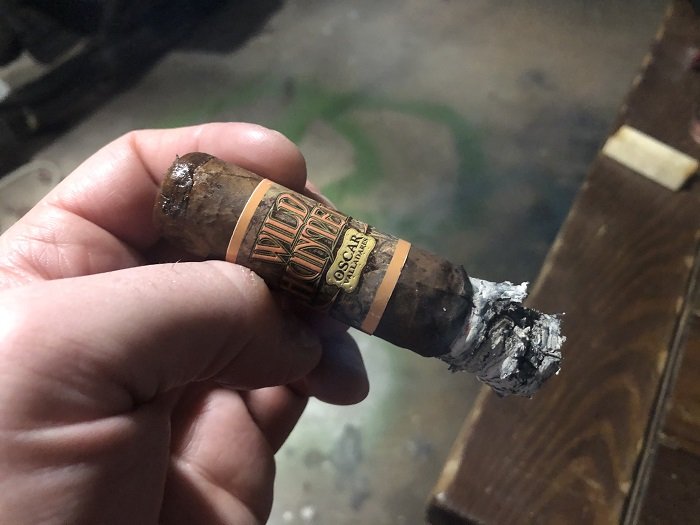 Char, bitterness, with tannic cedar moving into the last third. Some mild spice sand toasted earth serve to add complexity in the middle of the profile. Spices and earth carry into the post draw. Intense char returns by the halfway point, completely dominating all other flavors. 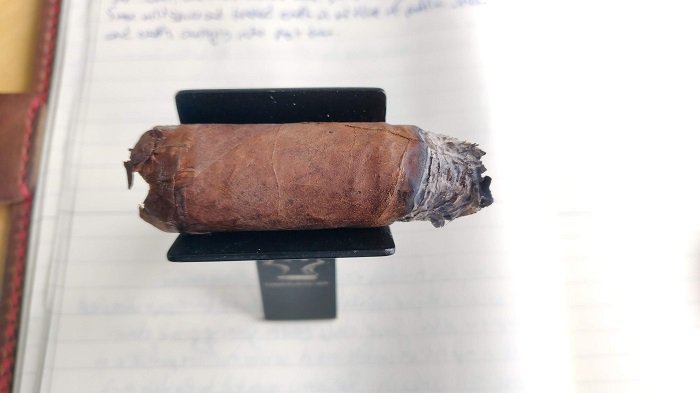 The burn was wavy throughout and required two touch-ups to keep things burning correctly. The cigar also went out twice, requiring re-lights.

The burn was solid throughout with a nice light gray ash produced that held on firmly.

The burn was lopsided at times, resulting in a minor canoe by the halfway mark, which necessitated a touch-up. In the second third, the canoe returned requiring another touch-up. Ash held on well in over 1 inch increments.

The draw alternated between being a bit loose and a bit tight.

The cigar began with oak, mustiness, paper and light chalkiness. The paper morphed to cardboard as some baking spice and dry earth joined. The second third saw some wood bitterness join in and fluctuated in fullness. The final third saw a vegetal note join in which was later replaced by a pine note. Construction wasn’t very good with the draw moving between loose and tight and multiple touch-ups and re-lights required. Strength was slightly below medium most of the way. The Oscar Valladares Wild Hunter Maduro started fairly average and as the second third saw wood bitterness join in at a decent level, it knocked things down even more. The cigar is very rustic and raw. There may be those that enjoy a profile like this, but it isn’t really for me. I didn’t really experience anything that would cause me to want to revisit this cigar.

Draw was decent throughout, not great. Had to re-light the cigar a couple times.

I was not impressed with the Oscar Valladares Wild Hunter Maduro and felt it to be a terrible representation of Honduran tobacco and cigars released by Oscar Valladres. I have always said that Honduran puros are either amazing or terrible and this falls into the latter of the two. I couldn’t recommend this cigar to any smoker and struggled to find any really redeeming quality about the cigar throughout the smoking experience. I will say the bands and packaging are terrible. That is not an opinion; that is a fact.

The draw was at most 1 notch towards the resistant spectrum, putting it in the ideal range.

The Oscar Valladares Wild Hunter Maduro started out as an average experience in the first third that unfortunately became a subpar experience through the second and last third. The initial flavors of sweet nuttiness and cedar were overrun by toasted earth, char, bitterness, and at times, tannic cedar. Overall, a subpar experience. Total smoking time was 1 hour and 37 minutes.