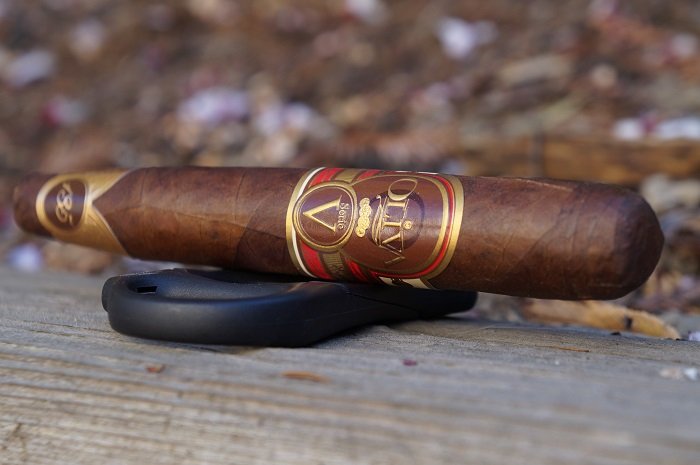 Aaron: The shape of the Oliva Serie V 135th Anniversary Edición Limitada is unique as it has a long taper from the foot to about an inch and a half up and the rest of the cigar is a standard Parejo shape. The wrapper is medium brown with some lightly raised veins. The seams are smooth and the caps very well applied. There are two bands, with the primary being the tradition design for the Serie V. The foot band is gold and brown and denotes 135. The aroma from the wrapper is a very light mix of wood and earth while the foot brings some lightly musty cedar. The pre-light draw brings musty, sweet cedar.
Seth: Beautifully constructed, and finished in a unique vitola, the Oliva Serie V 135th Anniversary Edición Limitada is finished with a great triple cap and a wrapper that is chocolate brown in coloring. Light Colorado Maduro throughout. Small veins and smooth in texture. Aromas of tobacco, leather and earth.
John: The Oliva Serie V 135th Anniversary Edición Limitada comes without cellophane, and doesn’t have a UPC sticker. The cigar has a standard Oliva V main band, along with an eye catching bronze and brown footband that says ‘135’. The cigar is a figurado vitola, and there are no additional artisanal complications. Aromas from the wrapper was only mild, dry wood. Due to the shape of the cigar there wasn’t much of an exposed foot and I was unable to pick up any distinct aromas.
Jiunn: The look of the Oliva Serie V 135th Anniversary Edición Limitada is super suave, with its sexy taper. Veins are well pressed, seams tight, bunch and roll even and head well wrapped. Aromas from the wrapper tell of rich, decadent fudge. Aromas from the foot give white pepper and nuts. Cold draw tells of cedar and a zippy white pepper spice. 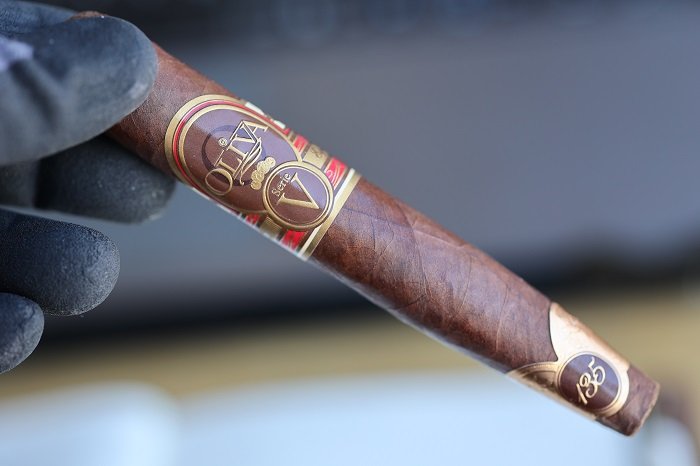 Aaron: The cigar begins with lightly musty and lightly toasted cedar and a very nice cinnamon note. At a quarter inch in, a light creaminess joins. The retrohale is musty, toasted cedar and mild baking spice. At an inch in, the cinnamon has morphed into more of a general baking spice. At an inch and a quarter, some earth joins in. As the third comes to a close, the profile is musty, toasted cedar up front with baking spice and earth in the middle and a light creaminess in the background. The strength was right at medium.
Seth: The first third starts out with soft cocoa notes that are paired with bits of earth, nuts and leather. There are some sweet spices and pepper on the finish, and they are paired with coffee bean notes. Medium-full in strength and body.
John: The first third opens with mild wood, baking spices, and baking spices combining with earth in the post draw. Some sweetness is present on the retrohale after a couple puffs. Not long after, mild bread comes through the retrohale under some spicy wood. Moving towards the halfway point, some mild, dry wood joins the post draw.
Jiunn: From the beginning tapered portion to catching up to the main ring gauge (i.e. thinnest to thickest ring gauge), the transition is all about red pepper spice delivery. A punchy but not overbearing dry red pepper spice that slowly melds more cohesively to naturally sweet and roasted dried nuts. Retrohaling gives sharp white pepper, cedar and toasted nuts. The finish is medium in length, with a bready and nutty character. Strength is medium-full, body is medium.

Aaron: As the second third begins, the baking spice mellows a bit. At a half inch in, the earth is now even with the musty, toasted cedar up front. The retrohale is now an even mix of musty, toasted cedar and earth. As the third comes to a close, the profile remains musty, toasted cedar and earth up front with baking spice and creaminess in the background. The overall profile is slightly dry. The strength remained at medium.
Seth: The second third delivers a flavor profile that is in line with the first. I am picking up chocolate notes that are paired with earth and leather. Touches of nuts, tobacco, and pepper on the finish. Again, medium-full in strength and body.
John: Some mild sweetness with baking spices, wood and bread start things off here as dry wood and baking spices combine through the post draw. The post draw wood takes on some astringency as the second third settles in. Moving towards the halfway point, the wood is up to medium strength, and takes over the center of the profile. Overall, the second third is pleasant, but fairly linear in how the flavors combine.
Jiunn: The second third forms an astringent dry red pepper spice that sits on the rear palate. The only way to really get rid of it is having a sip of water. The retrohale stays the same, being white pepper heavy, followed by cedar and toasted nuts. Strength and body remains medium-full and medium, respectively. 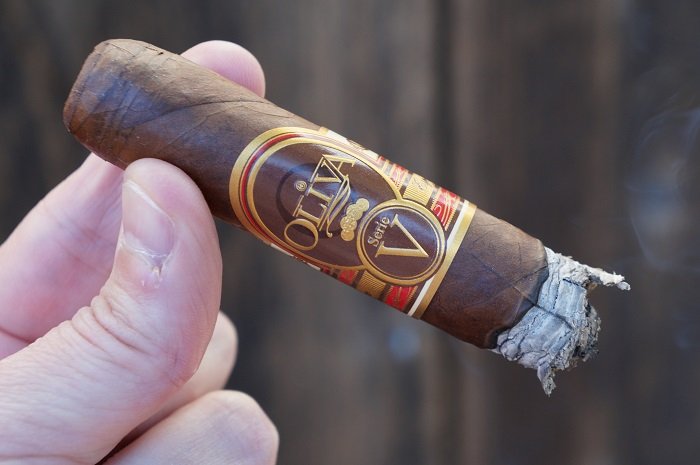 Aaron: The final third continues on with the profile from the second. The retrohale remains an even mix of musty, toasted cedar and earth. At three quarters of an inch in, the cigar is warming up and a light vegetal note has joined in while the creaminess has departed. As the cigar wraps up, the profile is musty, toasted cedar and earth up front with baking spice and a vegetal note in the background. The strength bumped up to slightly above medium.
Seth: The final third delivers a flavor profile of nuts, chocolate, tobacco, leather and pepper. Sweet pepper spices are also present on the finish. Medium-full in strength and body. Smooth cigar.
John: Baking spices and wood define the final third, with bread faintly coming through in the middle of the retrohale. As it settles in, a medium strength tannic cedar finishes each draw.
Jiunn: The final third follows the trend of the second third, but it’s more offensive. Still very astringent dry red pepper spice lodged on the rear palate. Not many redeeming qualities to it at this point. Strength and body is unchanged at medium-full and medium. 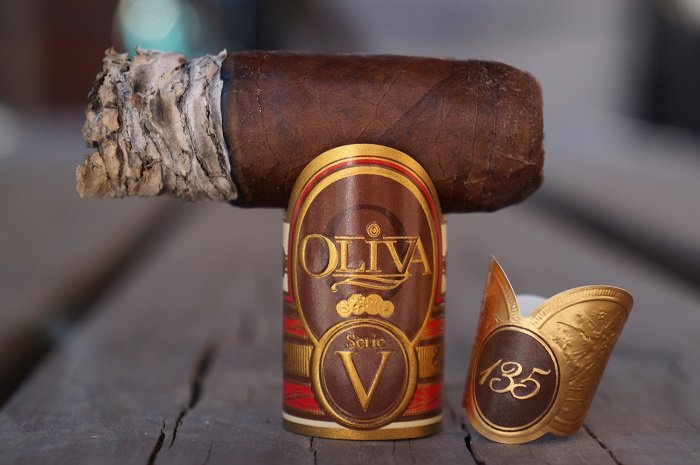 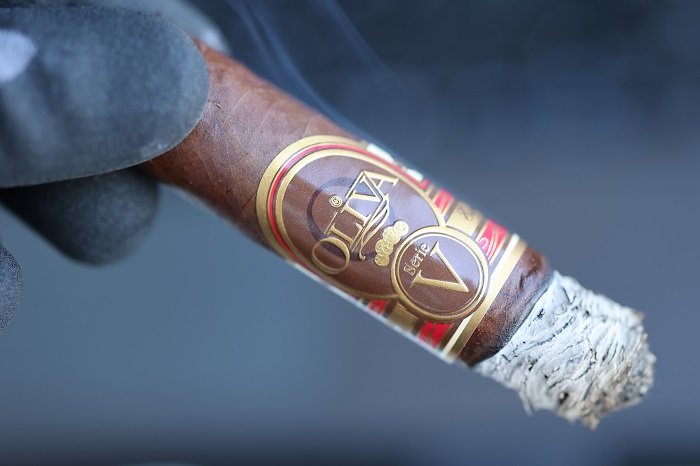 Aaron: The cigar began with lightly musty and lightly toasted cedar and a very nice cinnamon note. Some creaminess joined in a bit later and the cinnamon transitioned to baking spice. Some earth joined a bit later. The second third maintained this profile and the final third saw a vegetal note join in as the cigar warmed up and the creaminess departed. The Oliva Serie V 135th Anniversary Edición Limitada was really good through the first half inch as the combination of flavors really fired on all cylinders. After that, things began to degrade as the earth played a bigger role and was average the rest of the way. Overall, I don’t see this rendition of the line attracting me more than the regular V’s, and while the price point is attractive, I wouldn’t see myself coming back to this cigar as the regular V’s provide a better experience.
Seth: I am a big fan of the Oliva Serie V line. I have been smoking them for years, and I like multiple vitolas in the line. This Oliva Serie V 135th Anniversary Edición Limitada was not my favorite Serie V offering, and I am not sure if it was just this release or the vitola itself. I have smoked a handful, and for some reason the cigar does not compete with the other regular production Serie V offerings that I have picked up off shelves. It delivered some of the core flavors, but it just seemed lacking. I smoked an Oliva Serie V Belicoso afterwards though and all was better.
John: The Oliva Serie V 135th Anniversary Edición Limitada started out with some interesting and layered flavors in the first third, became linear in the second third and was completely monotonous in the last. I’m a big fan of the cigars Oliva puts out in general, so I might give this one another try to see if another example performs better. Total smoking time was 1 hour and 42 minutes.
Jiunn: I have a wonderful idea. Because I didn’t like the Oliva Serie V 135th Anniversary Edición Limitada when it caught up to the main ring gauge, I think Oliva should come out with another iteration of this cigar that tapers from thin to thick ring gauge (and back and forth) for the entire cigar. Call it the curvy edición limitada.