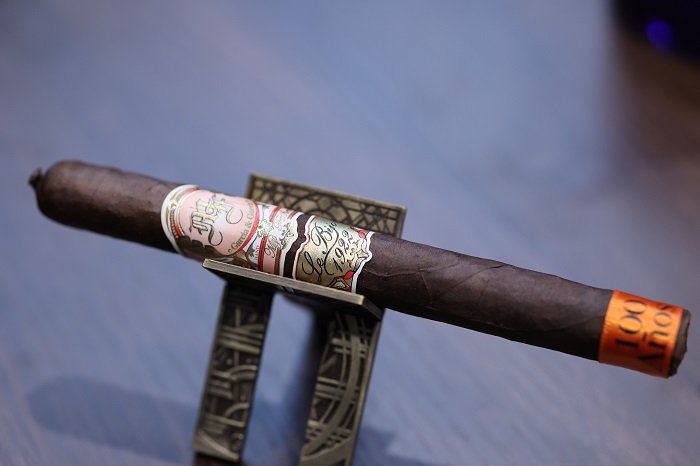 Aaron: The wrapper on the My Father Le Bijou 1922 100 Años Limited Edition Corona Especial is dark brown and has some decently raised veins present. The seams are smooth and caps well applied and finished off with a small twist. There are three bands, with the primary and secondary both carrying the traditional design for the line along with an orange foot ribbon that denotes 100 Anos. The aroma from the wrapper is damp earth and light wood while the foot brings cedar and tobacco sweetness. The pre-light draw brings a very light cedar and earth combination along with a mild spiciness on my lips.
Seth: The My Father Le Bijou 1922 100 Años Limited Edition Corona Especial is a beautiful cigar. Great foot band with a fantastic cap. Dark Colorado Maduro wrapper. Small to medium sized veins throughout. Firm in hand. Espresso bean coloriong. Aromas of manure, rich earth, strong tobacco and spices.
John: The My Father Le Bijou 1922 100 Años Limited Edition Corona Especial does a good job of showcasing a Limited Edition release. The cigar is cellophaned, and has UPC sticker that tears in half when opened. The cigar is triple banded, with a primary My Father band, a secondary ‘Le Bijou 1922’ band and a ribbon foot band indicating 100 Años in orange. Additionally, the cigar has an artisanal complication of a fan cap. Aromas off the wrapper included very sweet tobacco, chocolate, honey, almost a rum barrel influence of rum sweetness and wood. From the foot, there’s a more pronounced barrel influence of rum sweetness, wood and hay.
Jiunn: The My Father Le Bijou 1922 100 Años Limited Edition Corona Especial has a hearty maduro wrapper shade. Veins are well pressed, seams tight, bunch and roll even and head is well wrapped. Aromas from the wrapper tell of barnyard and hay. Aromas from the foot give strong dried red pepper spice and trailing cedar. Cold draws reveal baker’s chocolate and hay. 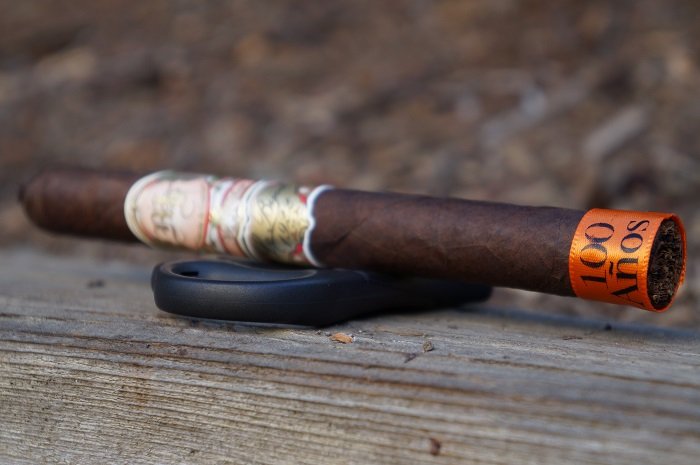 Aaron: The cigar begins with toasted oak, dark earth and baking spice. At a quarter inch in, a faint cocoa note becomes present. The retrohale is toasted oak, dark earth and zingy black pepper. At an inch and a quarter, the baking spice transitions to a lightly creamy black pepper and the cocoa note drops out. At an inch and three quarters, the creamy black pepper is pretty mellow. As the third comes to a close, the profile is toasted oak and dark earth even up front with creamy black pepper a fair distance behind. The strength was right at medium.
Seth: Balanced cigar. Leather, tobacco, wood and earth. Soft creamy notes present as well. Bits of red pepper spice present. Faint cashew notes as well. Medium-full in strength and body. Lovely.
John: The first third kicks off with baking spices, cocoa, wood and a mild earth and wood combination to finish, which lingers into the post draw. The spices become more intensified through the retrohale, and push into the post draw. A medium strength wood comes into the post draw as the baking spices rapidly move up to medium-plus strength, lingering between each puff. It doesn’t take long before the baking spices are reaching full strength at points during the retrohale. Some time later, chocolate moves to the front of the profile and the baking spices move back down to just over the medium mark. As they do, a creamy wood takes over the center of the profile. Earth and leather combine on the post draw adding complexity. The earth eventually leads the post draw flavors. A full bodied, and full strength first third.
Jiunn: The first third does a good job of providing flavors that are bold and deep. Richness in seeded fresh red peppers, cedar, semi-sweet chocolate and trail nuts. Retrohaling is intense with that fresh pepper spice but also gives relief in the form of creaminess in roasted nuts. The finish has the pepper spice on the rear palate, but it’s not invasive. Strength is medium-full and body is medium. 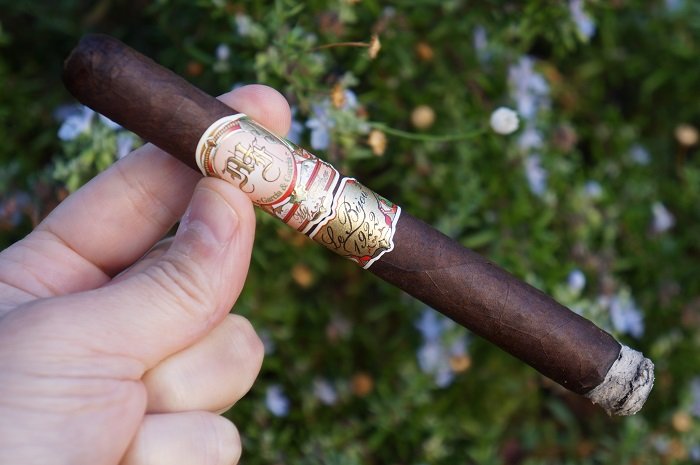 Aaron: The second third is a continuation of the toasted oak and dark earth even up front with creamy black pepper a fair distance behind. At a half inch in, the creamy black pepper is now very light. The retrohale is now toasted oak, dark earth and mellow creamy black pepper. As the third comes to a close, the profile is toasted oak and dark earth even up front with a very faint creamy black pepper in the background. The strength remained at medium.
Seth: Again, balanced cigar. Leather, earth, wood and tobacco notes. Creamy, faint cashews and red pepper spices. Herbal qualities present as well. Medium-full in strength and body.
John: The second third brings flavors of creamy chocolate, earth and wood with earth and baking spices finishing into the post draw. As the cigar settles into the second third, that earth and wood define the post draw. A short time later, the earth and wood combination also move into the center of the profile. Moving towards the halfway point, a spice and bread combination come through the retrohale. In the bottom half, earth moves to the front of the draw.
Jiunn: The second third shows a transition out of the heavy handed pepper spice. What takes place is a pleasant chalkiness and minerals that is well melded with semi-sweet chocolate. Strength and body is still medium-full and medium, respectively. 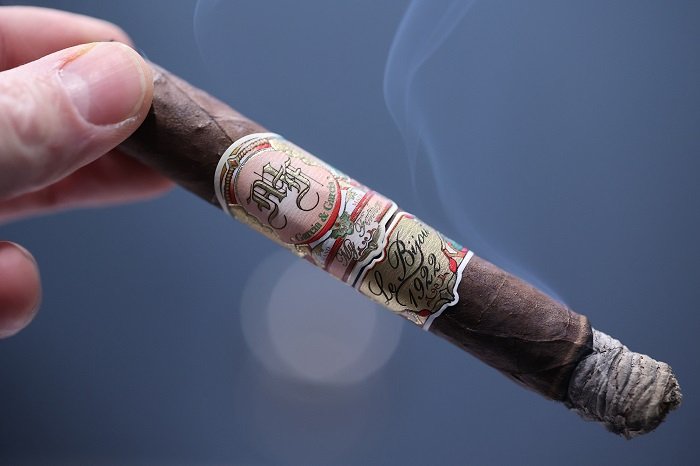 Aaron: As the final third begins, the black pepper picks back up a bit, but loses the creaminess. At a half inch in, the black pepper is now right behind the toasted oak and dark earth. The retrohale is now just toasted oak and light earth. At an inch and a quarter, some wood bitterness joins the profile. As the cigar comes to a close, the profile is toasted oak and earth that is no longer dark with black pepper a bit behind and light wood bitterness. The strength remained at medium.
Seth: The final third is in line with the second third. Earthy, wood, leather and cream qualities. Bits of cashews and red pepper. Tobacco and herb notes as well. Medium in strength and body. Balanced.
John: The last third fires with earth, spices, wood and bread as earth and dry wood again combine into the post draw. Sweetness is present at the end of the draw as it settles. As the last third progresses, earth is driving the post draw, as the other flavors begin to become muted through the remainder of the review.
Jiunn: The final third shows no changes from the second third. Still a pleasant chalkiness, semi-sweet chocolate, minerals and fresh red pepper spice. Strength and body is unchanged at medium-full and medium. 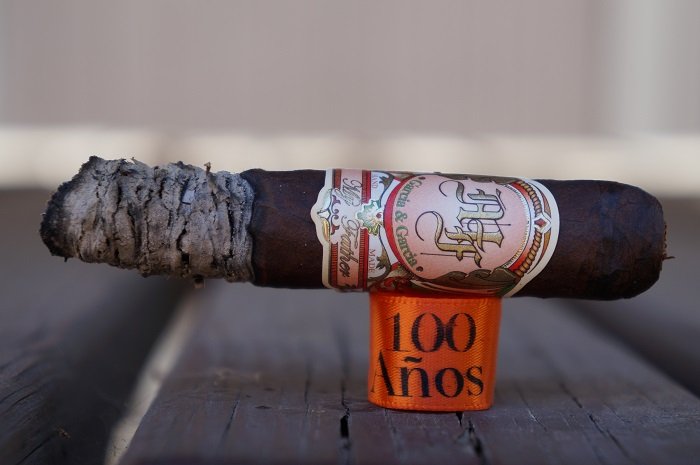 Aaron: The burn was straight throughout, but the cigar did go out twice, requiring re-lights.
Seth: Great burn throughout. Well constructed cigar.
John: The burn was uneven through the first, second and last thirds. The burn required a touch-up in the last third to correct.
Jiunn: Aside from a random complete re-light within the second third, the burn performance was spot on. 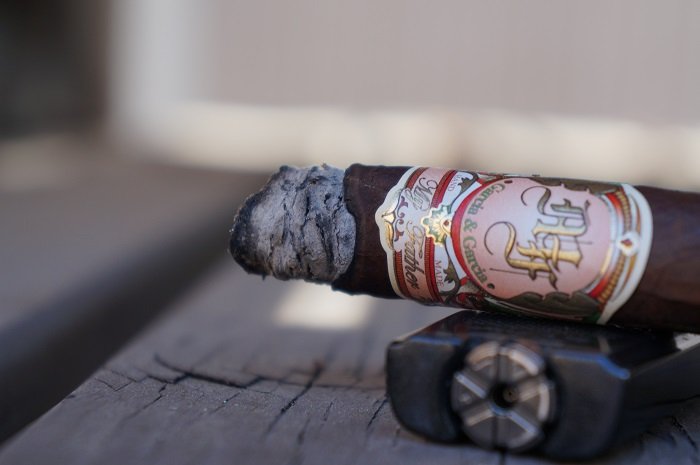 Aaron: The draw was a bit tighter than I prefer, but didn’t cause any issues with the smoking experience.
Seth: Perfect draw.
John: The draw was right in the ideal zone between open and resistant.
Jiunn: Amazing draw performance, giving the best balance of air flow and resistance.

Aaron: The cigar began with toasted oak, dark earth and baking spice. A faint cocoa note joined in for a short time. The baking spice later transitioned to creamy black pepper. The second third saw the creamy black pepper become very light. The final third saw the black pepper pickup but lose the creaminess and a wood bitterness joined in. The first two inches of the My Father Le Bijou 1922 100 Años Limited Edition Corona Especial were pretty good, but after that, the profile lost that dynamic as the cocoa had left and the creamy black pepper just had a background role. If the first third’s profile could have lasted longer, this would be a pretty good cigar, but as it stands, it just didn’t provide enough to make me want to come back to it with any frequency.
Seth: Finally, a limited edition cigar that smokes like a limited edition cigar should smoke. What a fantastic cigar. Balanced and beautiful. Great draw and burn. Best cigar I have smoked in 2022. I could go on and on about this My Father Le Bijou 1922 100 Años Limited Edition Corona Especial. Great size. The creaminess with the pepper, leather and earth. Amazing! Well done!
John: The My Father Le Bijou 1922 100 Años Limited Edition Corona Especial does a lot to satisfy fans of the original Le Bijou 1922, and anyone who enjoys cigars in the fuller end of the spectrum. The flavor notes for the first third might have set a review record for me, and while the second third wasn’t nearly as complex, it did more than enough to earn a good rating. The last third started out well, but as it progressed, it lost a lot of the harmony and complexity delivered from the rest of the cigar. The burn was wavy for most of the review, requiring a single touch-up to correct. The draw was perfect. While in past years the price point might seem high, it seems perfectly in line with 2022 and 2023 pricing trends, and quite reasonable for a Limited Edition offering. I will happily be seeking out more Le Bijou 1922 100 Años Limited Edition Corona Especials to smoke in the future. Total smoking time was 1 hour and 45 minutes.
Jiunn: Interestingly enough, although the flavor profile of the My Father Le Bijou 1922 100 Años Limited Edition Corona Especial isn’t one that I personally enjoy and would reach out for very often, I will give credit where credit is due. The blend execution was well thought out, providing a rich and hearty flavor experience. I’m not a big fan of the spice driven hearty blend (like this cigar), but the flavors worked boldly and harmoniously. Highly recommended for cigar smokers who enjoy a bit of strength and robust flavors.