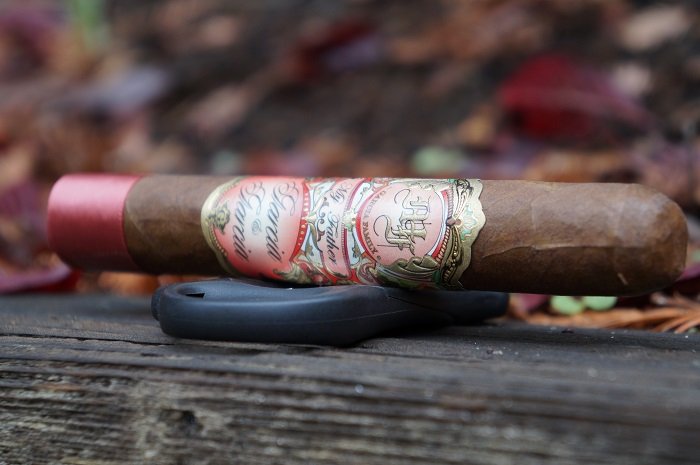 Aaron: The wrapper on the My Father Garcia y Garcia Robusto Deluxe is a matte medium brown and has some thick veins that are well pressed. Some of the best seam work I’ve seen as they are very hard to detect and the head is finished just as well. There are two bands, with the primary having the upper half with the traditional core line design and having a lower half with similar artistry and denoting the line. The foot band is a ribbon that I can best describe as dusty mauve. The aroma from the wrapper is a lightly musty wood. The foot brings more musty wood and light ammonia. The pre-light draw brings sweet and lightly musty cedar.
Seth: The wrapper on the My Father Garcia y Garcia Robusto Deluxe is toothy in texture with small to medium sized veins throughout. Firm. Not oily to the touch. Natural Brown in coloring. Very Colorado, maybe soft Colorado Maduro. Aromas of cedar, barnyard, manure and sweet fruits. Funky, but to my liking. Made me thing of tripel.
John: The My Father Garcia y Garcia Robusto Deluxe comes in cellophane, and does not have a UPC sticker. The central band is quite large and ornate, and encompasses almost half the length of the cigar. Additionally, the cigar has a red foot band ribbon. For aromas off the wrapper, I was picking out sweet bread and fresh wood. From the foot, I could detect sweet tobacco and bread.
Jiunn: The My Father Garcia y Garcia Robusto Deluxe has a Colorado Maduro wrapper shade. The wrapper is of high quality, given its fine traces of tooth and oily contents. Veins are well pressed, seams tight, bunch and roll even and head well wrapped. Aromas from the wrapper tell of faint cedar and hay. Aromas from the foot give abundant white pepper and sweet nuttiness. Cold draw gives cedar, hay and apricots. 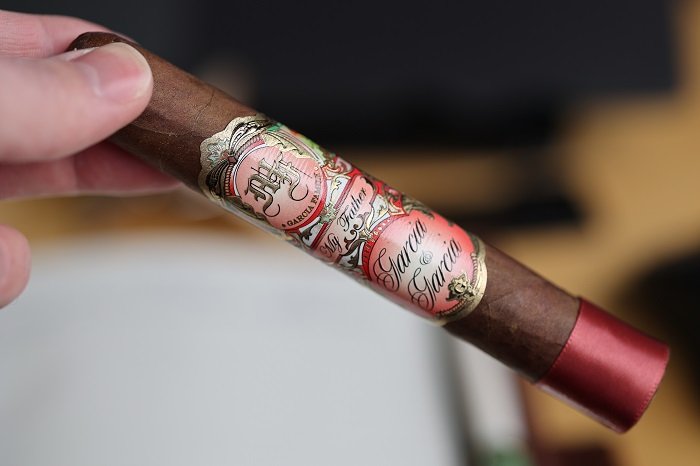 Aaron: The cigar begins with musty cedar and light baking spice. At a half inch in, the cedar gains some toast while a light creaminess joins the profile. The retrohale is toasted, musty cedar with some black pepper a bit behind. At an inch and a half in, the baking spice is very mellow. The third wraps up with musty, toasted cedar and light amounts of creaminess and baking spice. The strength was slightly below medium.
Seth: The first third begins with some leather, herbal, dark cocoa, cedar, coffee, manure and nut qualities. I am also getting this coconut flavor. Not really coconut shavings that are sweet, but a more natural coconut. Just above medium in strength and body. If you have ever had Coco Cafe Coconut Water, it comes to mind with this cigar.
John: My first few puffs were flavors of sweet and mild bread, wood, mild baking spices, with sweet wood to finish. Some medium baking spices start to develop on the retrohale. The initial profile is creamy and subdued, which caught me off guard. By the halfway point, baking spices are replaced with creamy wood. Some out of balance earth joins the profile in the bottom half, as the cigar struggles to stay lit.
Jiunn: The first third has a harmonious set of flavors. It almost feels like a well cooked dish. It’s meaty, well seasoned with black pepper, has a savory umami character, cedar, baking spices and a hint of herbal tea. Retrohaling deepens the black pepper as well as more pronounced baking spices. The finish layers the tongue with black pepper and oak. Strength and body is medium. 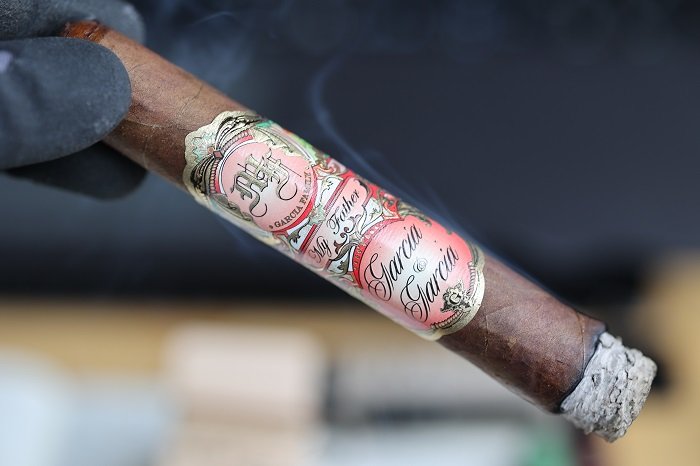 Aaron: As the second third begins, the creaminess drops out and the overall profile is becoming a bit dry. At a half inch in, the light baking spice is now black pepper. The retrohale is now just musty, toasted cedar that is a bit dry. At three quarters of an inch in, some dry earth joins the profile. At an inch and a quarter, the black pepper has picked up a bit. As the third comes to a close, the profile is musty, toasted wood slightly ahead of the dry earth with black pepper a bit behind that. The strength bumped up to medium.
Seth: The second third delivers this earth, dry wood, leather, spices, manure, coffee and cocoa quality. Not as Coco Cafe as the first third, but more neutral and down to earth. Slightly stronger than the first third. It is still just above medium.
John: The second third gets the profile started with bread, wood and mild earth. The earth finishes the draw as it settles in. As the cigar progresses, wood moves into the center of the profile. By the bottom half, mild baking spices have joined the middle of the profile and the finish.
Jiunn: The second third’s flavor profile surprisingly becomes sharper. The feel of a well made dish has turned into a slap together of disconnected flavors. Sharp baking spices and minerals are on the forefront, a nuttiness as an afterthought. Strength increases to medium-full, while body remains medium. 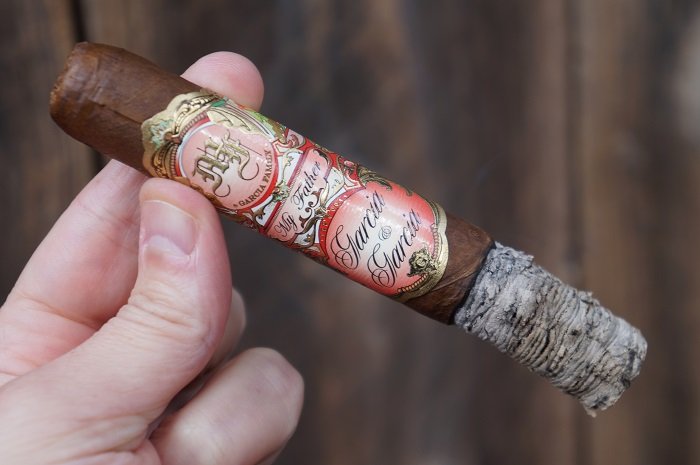 Aaron: The final third begins with the toast level increasing a bit. The retrohale is now musty, toasted cedar with some black pepper a bit behind. At three quarters of an inch in, a light vegetal note joins the profile. The cigar wraps up with a profile of musty, toasted wood slightly ahead of the dry earth with black pepper a bit behind that and a vegetal note in the background. The strength remained at medium.
Seth: The final third delivers this earth, dry wood, leather, spices, manure, coffee and cocoa quality. It is identical to that of the second third. Like the second third, just above medium in strength and body.
John: Bread and wood greet me in the last third retrohale, as the cigar finishes with tannic wood. Some delayed dryness also joins the post draw after a few puffs. As the last third progresses, it is primarily wood forward. Some bitterness is present approaching the halfway mark, as the cigar struggles to stay lit.
Jiunn: The final third has no changes from the second third. Still a mix mash of divided flavors being baking spice and mineral forward. Strength and body is unchanged at medium-full and medium, respectively. 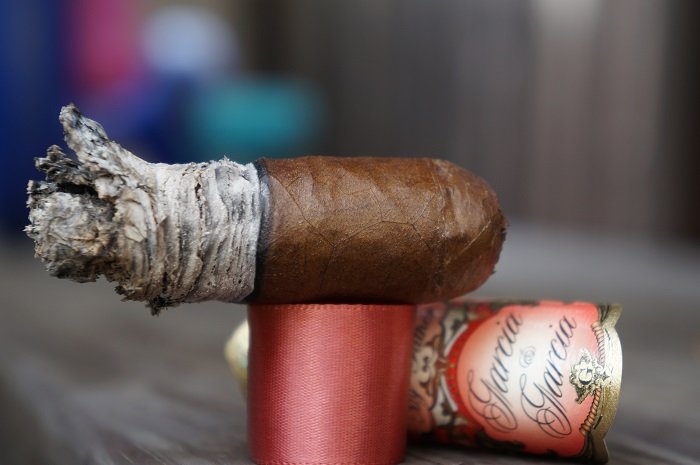 Aaron: The burn was straight through the first half of the cigar, but then things got a bit wavy but never required any attention. The ash held on nearly through each third.
Seth: Very good burn from start to finish.
John: The burn was relatively straight with an ash that held on just under the one inch mark. The cigar seemed to struggle to stay lit in the bottom half of the first third, and in the last third. A tunnel formed moving into the second third, requiring a touch-up. Another touch-up was required in the last third as the burn became uneven.
Jiunn: Perfect burn. Even burn, solid smoke production, tight ashes and cool burning temperature. 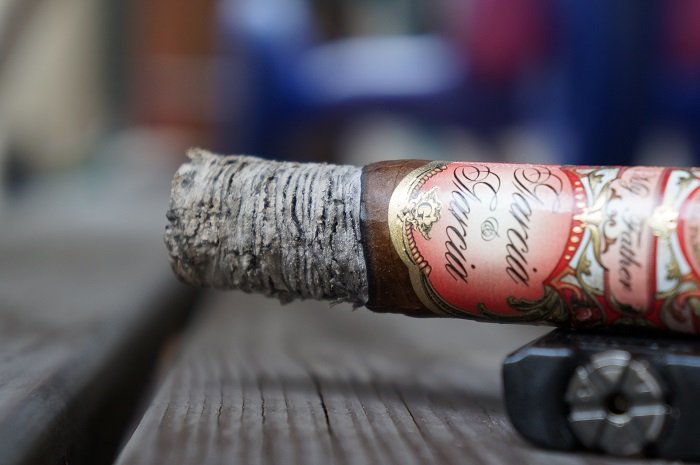 Aaron: The cigar began with musty cedar and light baking spice with some toast and creaminess joining fairly quickly. The baking spice transitioned to black pepper and some dry earth joined in. The final third saw a vegetal note join in. Construction was very good. Other than a few random draws in the first third, the My Father Garcia y Garcia Robusto Deluxe was disappointingly average. It was initially smooth and unassuming, which I can understand in a luxury cigar, but I would have thought there would have been something exciting about the flavor profile. Overall, it was quite boring, and regardless of the price point, I wouldn’t see coming back to this cigar, but when you factor in the price point, it’s a really hard sell.
Seth: You can’t spend $30.00 on this My Father Garcia y Garcia Robusto Deluxe. The flavor profile was average throughout, and there was a lack of complexity and depth beyond the first third. The Coco Cafe flavors were fun while they lasted, but overall this cigar did not do anything for me. I think I will remember it more for being too expensive.
John: Overall, the My Father Garcia y Garcia Robusto Deluxe delivered a much more subdued and nuanced flavor profile than I typically get from My Father cigars. The first third in particular had a nice assortment of flavors that were well balanced. I found the second and last thirds to be pleasant, but the complexity didn’t seem to live up to the first third. The draw was perfect, while the burn seemed to struggle at times and required two touch-ups. I would smoke this again after some time, to see if rest improved the burn and as a result impacted the flavor profile. Total smoking time was 1 hour and 55 minutes.
Jiunn: The My Father Garcia y Garcia Robusto Deluxe is yet another example of a strong start, but mediocre middle and finish. But this time around, there’s more salt on the wound, as it comes at a hefty price point of $30 MSRP. My Father just isn’t doing it for me lately. Which is a shame because I have very fond memories of not just My Father per se, but Don Pepin’s cigars from back in the days.