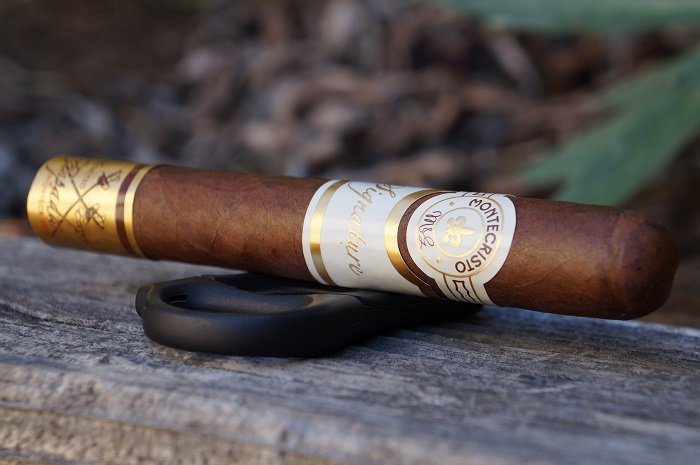 Aaron: The wrapper on the Montecristo Espada Signature Limited Edition Valiente is medium brown and has some decently raised veins present. The seams are slightly raised in some areas while the caps are well applied. There are three bands, with the primary being the traditional brand design but in off-white, brown and gold. The secondary band carries the same color combination and denotes Signature while the foot band is gold, brown and red and denotes the line. The aroma from the wrapper is a mix of cedar and earth while the foot brings slightly sweet cedar and a mild crushed red pepper spiciness. The pre-light draw brings cedar, cherry sweetness and mild earth along with a mid-level spiciness on my lips.
Seth: The Montecristo Espada Signature Limited Edition Valiente is beautiful in hand. Well-constructed, the cigar has a nice firmness throughout with a great triple cap. The wrapper is a great Colorado color, and there is a nice balance between light red and dark red. Minor veins throughout, the cigar has aromas of cherries, leather, damp wood, coffee beans and cocoa.
John: The Montecristo Espada Signature Limited Edition Valiente comes in cellophane, and has a UPC sticker that tears in half when the cellophane is opened. Initially, I thought the cigar had one very large band, but on closer inspection it’s a smaller primary band, a ‘Signature’ secondary band, and then a ‘Limited Edition Espada’ foot band. Aromas off the wrapper included bread, nutmeg, light wood, earth and sweet tobacco. From the foot, there was also sweet tobacco, along with raisin.
Jiunn: The Montecristo Espada Signature Limited Edition Valiente has an even and oily Colorado wrapper shade. Veins are well pressed, seams tight, bunch and roll even and head well wrapped. Aromas from the wrapper give nuts, barnyard and spicy cedar. Aromas from the foot tell elevated wrapper aromas. Cold draw gives cedar, jasmine and a hint of plastic. 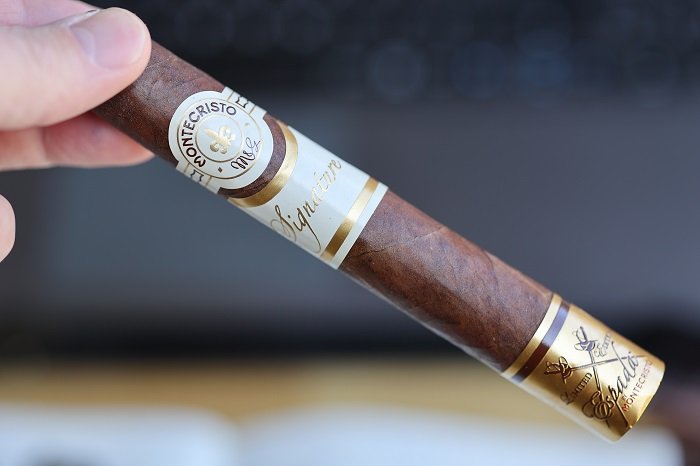 Aaron: The cigar begins with toasted cedar, crushed red pepper spice and earth. At a half inch in, the red pepper mellows and transitions to black pepper. The retrohale is toasted cedar and light amounts of earth and black pepper. At three quarters of an inch, a light creaminess joins the profile. At an inch in, the earth is now dry and right behind the toasted cedar. As the third comes to a close, the toasted cedar is just ahead of the dry earth with mild black pepper and cream in the background. The strength was right at medium.
Seth: The first third starts out with this meaty profile that is paired with oak and leather qualities. There is this muddy earth profile, and I am getting some vegetal qualities as well. Bits of mocha and coconut on the finish. Medium in strength and body.
John: Musty dry wood gets things started, as mild, light-plus strength dry wood takes up the post draw with a faint underlying pepper. Musty earth and wood combine through the retrohale. As the first third continues, pepper builds on the post draw to medium. The pepper on the retrohale also moves up to medium and is still building as I continue. Creaminess comes through a few puffs later which serves to offset the pepper intensity, somewhat. Pepper moves to the front portion of my tongue, with sweetness at the end of the draw. Around the 20 minute mark, the pepper finally seems to calm down and find a balance. The profile settles into sweet, musty wood, baking spices and pepper, as mild earth and wood with pepper accents define the post draw. Baking spices intensify by the halfway point to medium-plus, lingering well into the post draw. Some astringency joins the existing wood there not long after. In the bottom half of the first third, post draw earth has ramped up to medium strength.
Jiunn: The first third has a lot going for the profile. Nutty, cedary, leather tannins and good mineral backing. Retrohaling deepens the nuttiness, cedar and minerals. The finish primarily shows softness in sweet, roasted mixed nuts. Strength and body is medium. 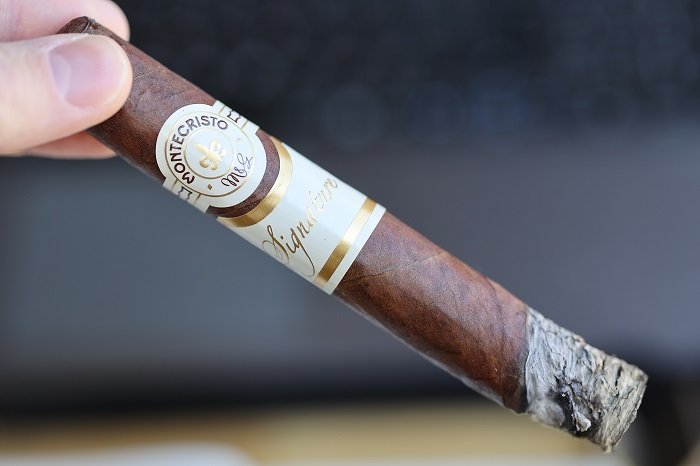 Aaron: As the second third begins, the toasted cedar and dry earth are now even. The retrohale is an even mix of toasted cedar and dry earth with some black pepper a bit behind. At an inch and a quarter, the black pepper is now very light. At an inch and a half in, the toast level increases. As the third comes to a close, the profile is heavily toasted cedar and earth even up front with light amounts of creaminess and black pepper in the background. The strength bumped up to slightly above medium.
Seth: The second third continues to deliver those oak and leather notes, and it has some cinnamon and pepper now with the muddy earth and mocha qualities. Like before, medium in strength and body.
John: The second third leads off with baking spices, as earth and wood again combine into the post draw. That earth quickly moves into the center, as the baking spices move up to medium strength on the retrohale. A dry, musty accent appears as it progresses. Some time later, chocolate is present on the retrohale. Dry wood finishes each puff in the bottom half.
Jiunn: The final third is very similar to the second third. The profile’s minerality picks up, but it doesn’t overshadow the other flavors. Strength and body finishes the same medium. 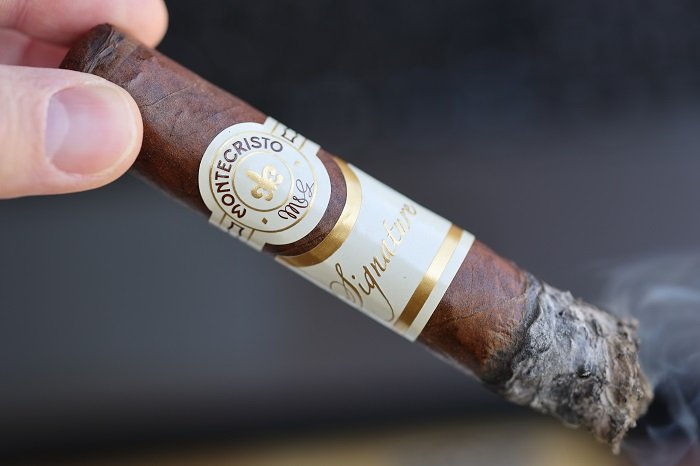 Aaron: As the final third begins, the toast transitions to a light char. The retrohale is now a full dose of toasted cedar and dry earth. At an inch in, the black pepper and creaminess have departed. As the cigar wraps up, the profile is an even mix of charred cedar and dry earth. The strength remained at slightly above medium.
Seth: The final third delivers a flavor profile of earth, leather, cinnamon and red pepper. There are some faint mocha qualities on the finish, and it is still smoking around the medium level for strength and body.
John: The last third leads off like the second with baking spices and earth, as lingering earth, mustiness and wood combine into the post draw. Lingering earth sits at the front of the profile as it progresses, as well as defining the post draw. Some mild citrus moves into the center as the last third developes.
Jiunn: Second third’s profile highlights more of the cedar, sweet roasted mixed nuts, and tannins. This combination is most noticeable on the finish, making it much longer than the first third. Overall, still quite a balanced profile. Strength and body continues to be medium. 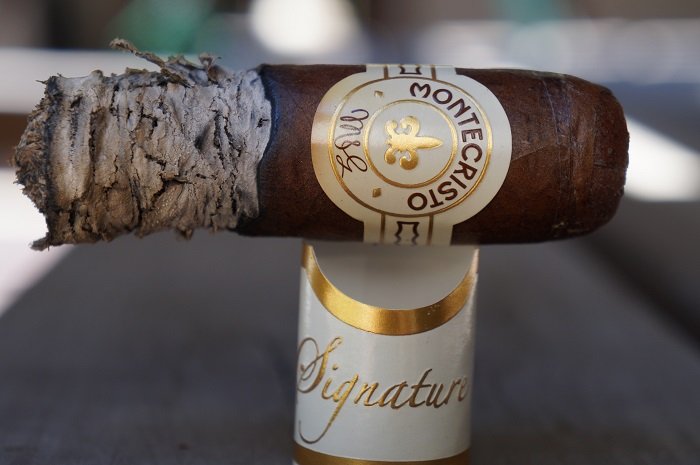 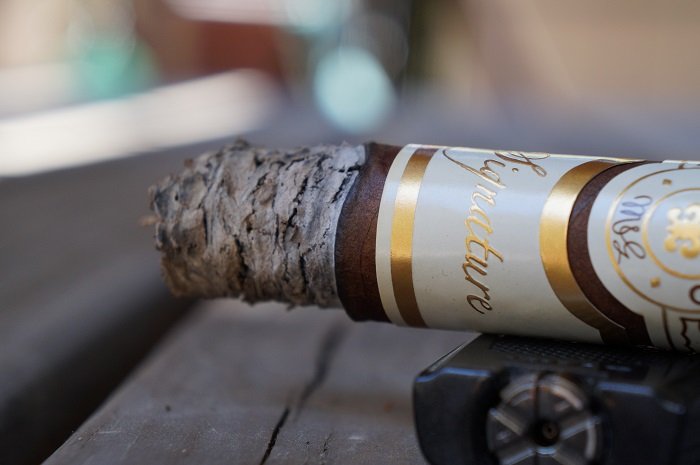 Aaron: The cigar began with toasted cedar, crushed red pepper spice and earth. A bit later, the red pepper transitioned to black pepper. Some creaminess joined a bit later. The second third saw the toast level become heavy and the black pepper lighten up. The final third saw the toast transition to char and the black pepper and creaminess depart. The Montecristo Espada Signature Limited Edition Valiente had an average and linear profile through the first two thirds and then dropped a level in the final third as the char joined and some other components dropped out. The profile was heavy and toasted/charred cedar and earth focused, caking my palate. Not a cigar I see myself returning to.
Seth: I was really hoping that this Montecristo Espada Signature Limited Edition Valiente would take off after the first third. I thought it had a flavor profile that was going to catapult it to success. Almost like Robin Hood and Azeem over the castle walls. However, the cigar went downhill some, and then plateaued it’s way to the finish. Robin did not get over the wall. Great construction and burn, but a blend that was just lacking. Why are we making 55 ring gauge cigars? I am not sure if this is the best Espada I have smoked, but there are too many. I know this is not the best Montecristo I have smoked, and I am not even including those from Cuba. With that being said, it’s a limited release with a good price range!
John: The Montecristo Espada Signature Limited Edition Valiente started out with what might be one of the longest sections I’ve ever written for a cigar first third. The second third maintained a pleasant engagement but it wasn’t as complex or layered, unfortunately. The last third was largely combined of baking spices and earth and didn’t offer enough dynamic flavor combinations to get up to a good rating. The draw was perfect, but the burn struggled as three touch-ups were required to correct. I might try this one again to see if the cigar can pull out some of the magic that was present in the first third. Total smoking time was 2 hours and 23 minutes.
Jiunn: The Montecristo Espada Signature Limited Edition Valiente was a pleasure to smoke from first draw to the very last draw. Altadis USA made the right decision in going to Plasencia for this blend. A well balanced blend showing sweet and creamy toasted nuts, lot of great earthiness and well mannered minerals. Keep this collaboration coming!