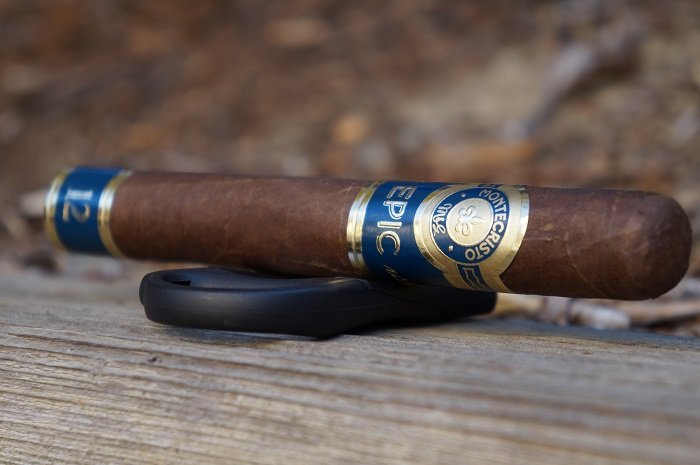 Aaron: The wrapper on the Montecristo Epic Vintage 12 Blue Toro is milk chocolate brown, but the slightly raised veins that are present carry a lighter color to them. The seams are very smooth while the caps show some lifting in a few areas. There are two bands, both with a dark blue and gold color combination. The primary denotes the brand and line while the foot band denotes the number 12. The aroma from the wrapper is dark earth and light cocoa powder while the foot brings wood and stone fruit sweetness. The pre-light draw brings a combination of black tea and cedar along with a mild spiciness on my lips.
Seth: Milk chocolate in coloring, the Montecristo Epic Vintage 12 Blue Toro is between Natural and Maduro. Aromas of sweet spices, raisins, earth, wood and chocolate. Firm throughout. Small veins scattered throughout with a smooth texture.
John: The Montecristo Epic Vintage 12 Blue Toro is presented in cellophane, with a UPC sticker that tears in half when the cello is opened. The cigar is double banded with an overlapping style that makes it look like one continuous band. The wrapper is dark brown and has a smooth appearance. I could detect aromas of sweet bread, tobacco and wood from the wrapper. From the foot, I picked up sweet tobacco and hay.
Jiunn: The Montecristo Epic Vintage 12 Blue Toro has good sheen to the almost Colorado maduro wrapper shade. Veins are well pressed, seams tight, bunch and roll even and head well wrapped. Aromas from the wrapper tell black tea and cedar. Aromas from the foot give a mixture of white pepper and dry barnyard. Cold draw tells hay and cedar. 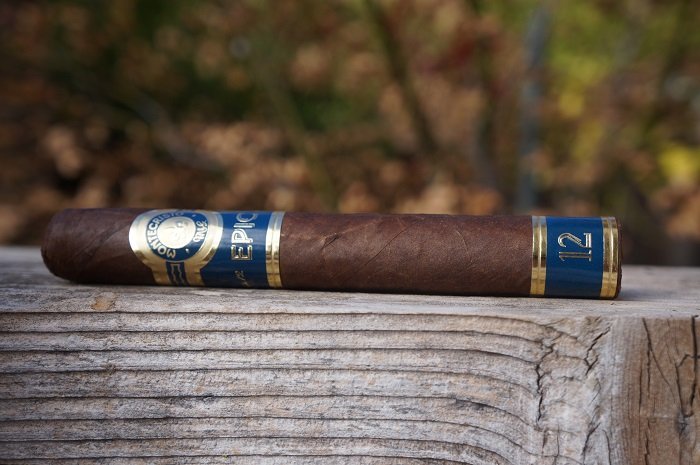 Aaron: The cigar begins with musty cedar, earth and baking spice. At a half inch in, the baking spice transitions to a dull, light black pepper. The retrohale is musty cedar and dry earth. At an inch and a half in, the earth has a slight lead over the musty cedar while the black pepper is in the background and has a long finish. The strength in this third was slightly above medium.
Seth: The first third starts out with some manure and hay notes. There are some spice qualities present as well, and I am picking up pepper and herbal qualities. There are some cinnamon, pear and apple notes on the finish, and I would classify the cigar as medium to medium-full in strength and body.
John: The initial flavor impression was stewed raisins, with tannic wood taking up the center and finish with a sharpness to the wood that lingered through the post draw. Through the retrohale, there is full bodied baking spices and a lingering pepper finish. The sharpness of the wood calms in intensity as the first third progresses. Some light leather joins the post draw as the stewed raisin becomes more subtle, transitioning into a sweetness and wood combination. Mild citrus sweetness comes through at the end of the draw by the 25 minute mark. Minutes later, mild cocoa joins the retrohale.
Jiunn: The first third provides a combination of bitterness and sourness of a citrus rind, cedar and a hint of white pepper spice. Retrohaling is far better than mouth draws since I don’t get any of the sourness and bitterness. Instead, it’s a smooth delivery of white pepper and roasted nuts. The finish, like the mouth draws, is less desirable, giving a cedar wood bitterness. Strength and body is medium. 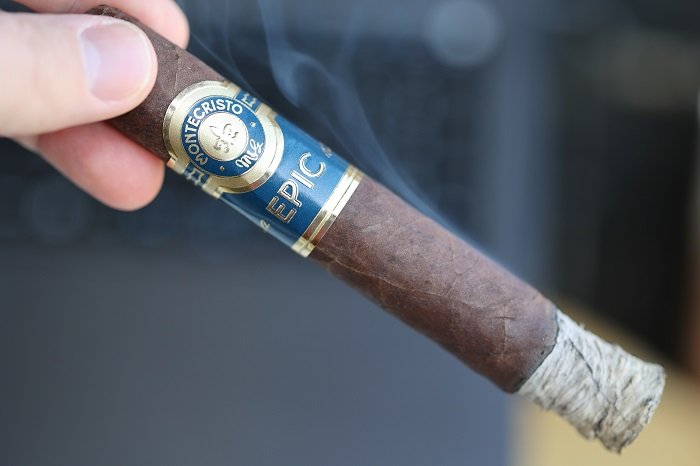 Aaron: As the second third begins, the earth and musty cedar are even with the black pepper still in the background. At a half inch in, the musty cedar gains a toast note. The retrohale is musty, toasted cedar and dry earth. At an inch and a half, the black pepper is now fairly light, but maintains a long finish. The strength in this third bumped up to medium-full.
Seth: The second third delivered a flavor profile of cream, herbal spices and wood. There are some coffee and earth notes present as well, and I am getting some mocha notes on the finish. Like before, medium to medium-full in strength and body.
John: The second third gets things started with sweet bread, wood, baking spices and a citrus finish with lingering wood into the post draw. The profile remains consistent both in strength and flavor combinations for the second third, which certainly keeps me engaged and interested.
Jiunn: The second third shifts the profile from being sour and bitter from citrus, to just bitter from cedar wood. The bitterness lathers the palate making the finish long and lingering. Strength and body remains medium. 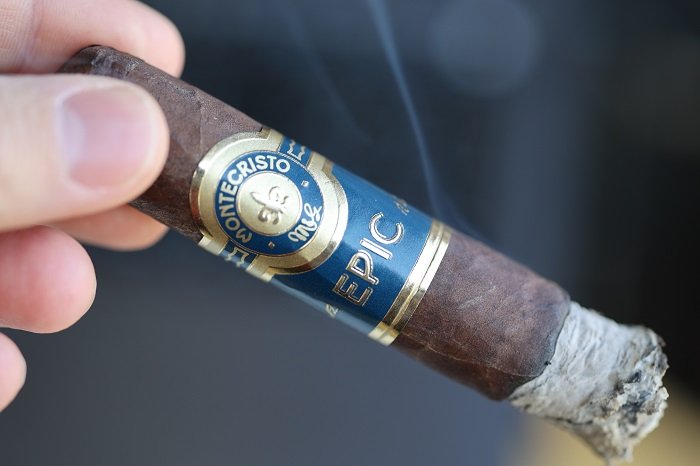 Aaron: As the final third begins, the toast level has become pretty heavy as the cedar has transitioned to oak. The retrohale is musty, toasted oak and dry earth. The cigar wraps up with musty and heavily toasted oak and dry earth with a light black pepper in the background. The strength in this third was at medium-full, verging on full.
Seth: The final third was right in line with that of the second third. I am getting some cream, herbal spice and wood notes. I am picking up those mocha qualities on the finish and like before the cigar is medium to medium-full in strength and body.
John: The last third is wood forward, with a sweet wood center to the profile. Some baking spices come through as it settles, combining with the wood. Sharpness returns to the wood as it progresses, settling on the tip of my tongue.
Jiunn: Nothing new to talk about for the final third. The profile is less spikey in flavors. But it’s still the same bitterness coming off of cedar wood, that does a great job of layering my entire palate. Strength and body finish the same medium. 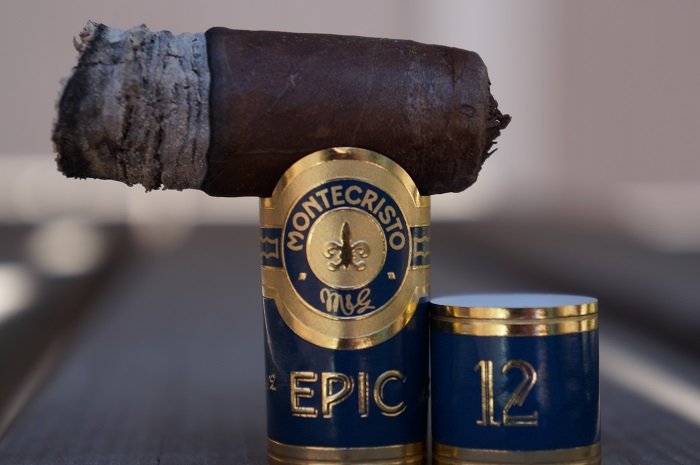 Aaron: The burn was straight throughout, but the cigar did go out twice, revealing some tunneling each time.
Seth: Nice burn throughout.
John: The burn was quite straight through the review, with the ash holding on over 1-1/2 inches at times.
Jiunn: The burn had a couple issues. First, a portion of the cigar refused to burn within the first third, requiring a significant touch-up. Second, the smoke production was meek. 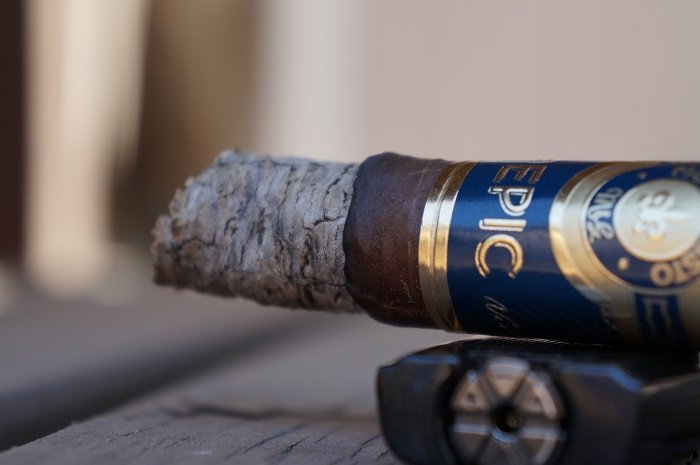 Aaron: The draw was slightly tighter than I prefer, but didn’t cause any issues with the smoking experience.
Seth: Solid draw from start to finish.
John: The draw was quite a ways into the resistant spectrum, roughly 3-1/2 to 4 notches. While it didn’t seem to impede the burn or flavor profile, it was tighter than an ideal draw.
Jiunn: The draw was a bit snug. It’s not a major deal, but nonetheless a notable one.

Aaron: The flavor profile was focused around musty, toasted cedar, dry earth and black pepper. In the final third, the cedar transitioned to oak. Overall, the Montecristo Epic Vintage 12 Blue Toro had a fairly muddled flavor profile as none of the individual flavors were that sharp. There is also some sneaky strength here as it built up as the cigar went along and nearly reached full at the end. This cigar just wasn’t for me as the flavor profile never gained my attention and was pretty boring. I don’t see myself coming back to this, especially at the high price point.
Seth: What started out somewhat enjoyable quickly became bland and average. There was no complexity or depth that drew me into the Montecristo Epic Vintage 12 Blue Toro when I got into the second and final third. The strength and body were nice, solid construction as well, but it was lacking in terms of the cigar being an enjoyable smoking experience. There seemed to be a focus on making a great first third, and not caring about the rest of the cigar. Does anyone finish anything anymore?
John: The Montecristo Epic Vintage 12 Blue Toro kept me interested and engaged through the first and second thirds, with at times intense flavors that managed to find a balance and harmonize. The last third was a bit of a disappointment with a largely wood driven profile that didn’t offend, but didn’t provide anything special. The burn was flawless, with the draw having a fair amount of resistance to it. I would smoke an Epic Vintage 12 Blue Toro again, this was a bright light in an otherwise bleak run of reviews. Total smoking time was 2 hours and 29 minutes.
Jiunn: After all these years, I still have not had a good Montecristo (non-Cuban). In general, I find the brand to be overpriced without ever delivering a solid flavor profile. The amount of sourness and bitterness from the Montecristo Epic Vintage 12 Blue Toro engulfed my palate in an unpleasant manner. Onto the next one…