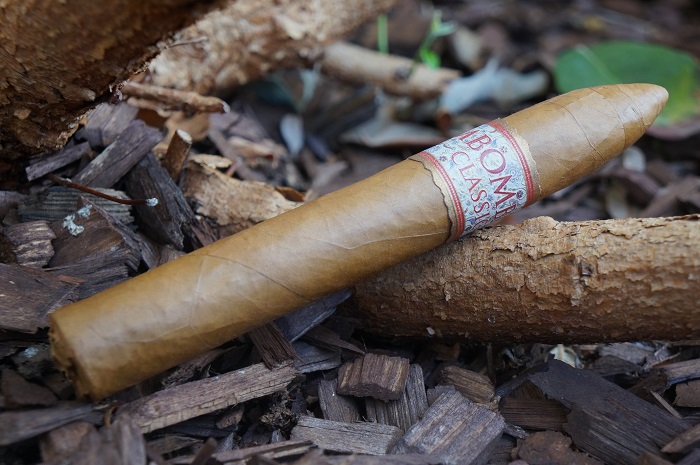 The wrapper is a medium tan color and has a few small and slightly raised veins present. The seams are smooth but fairly easily visible due to the light color of the wrapper. The torpedo head is perfectly finished with a triple cap while the foot is covered over with excess wrapper. The band is the traditional band for the Classic line and looks very nice. The aroma from the wrapper and the foot, since it is covered, reminds me of an infants teething biscuit. Having a three year old, I’m not too far removed from those days and I actually enjoy the smell. There is also a hint of hay mixed in. The pre-light draw brings a slight cereal note along with some hay. There is also a very mellow spice on my lips. 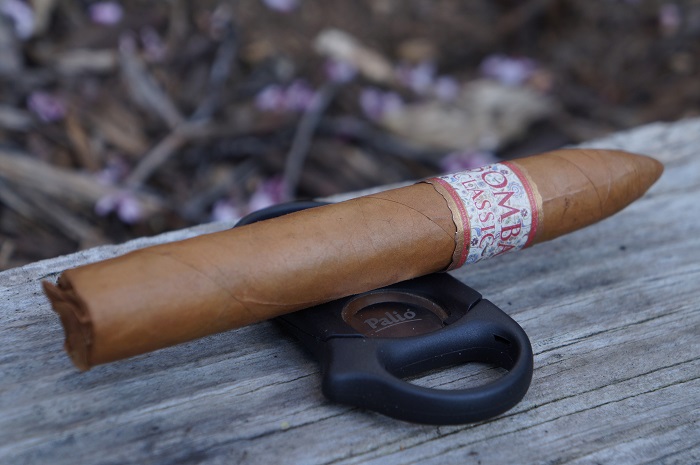 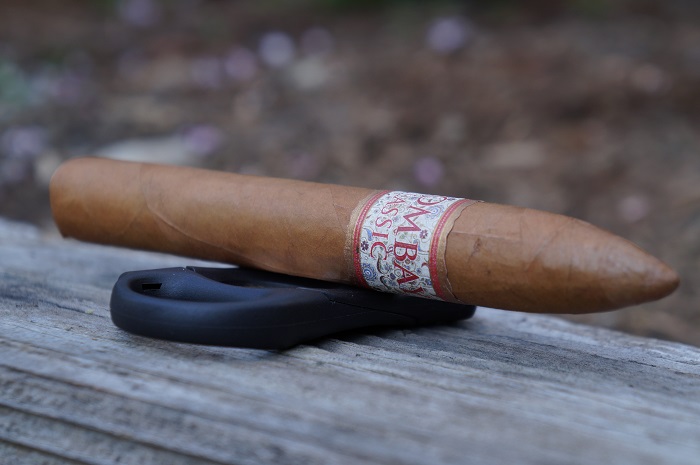 The MBombay Classic Torpedo has a light caramel claro wrapper shade. The wrapper not only looks nice, it feels nice being smooth and velvety. Veins are well pressed, seams tight, bunch and roll uniform and the aggressively tapered torpedo head has a well applied cap. Aromas from the wrapper give cedar, hay and subtle white pepper. Aromas from the foot tell white pepper, nuts and cedar. Cold draw gives hay and aged dry wood. 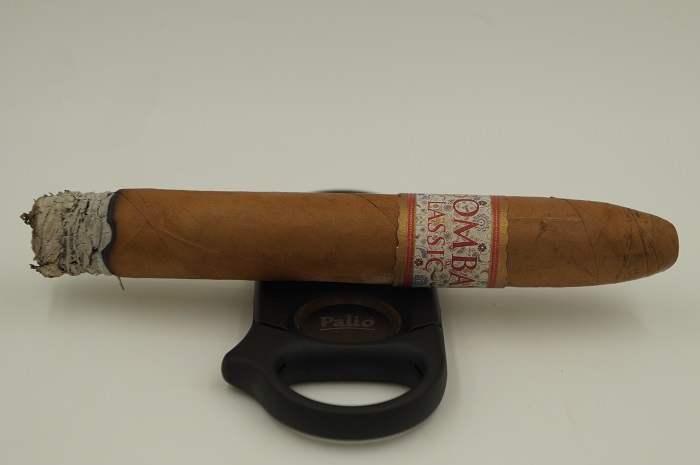 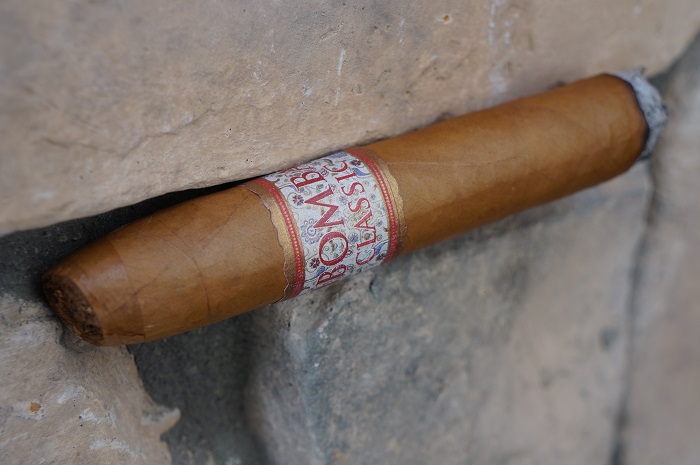 As the second third begins, toasted oak remains up front, with the cream the next prominent flavor. The red pepper has transitioned to a mild black pepper. At a quarter inch in, a very faint meatiness is detectable in the profile. At three quarters of an inch in, the toasted oak transitions to a slightly bright pine note while there is still some creamy and meaty notes in the background. The retrohale carries a mellower version of the slightly bright pine. At an inch and a half in, the pine isn’t quite as bright as earlier. There is still a slight cream present, but the meatiness has gone away. As the third comes to a close, the toasted oak is trying to fight it’s way back in to the profile, but the pine isn’t quite letting up. The strength has bumped up to mild-medium. 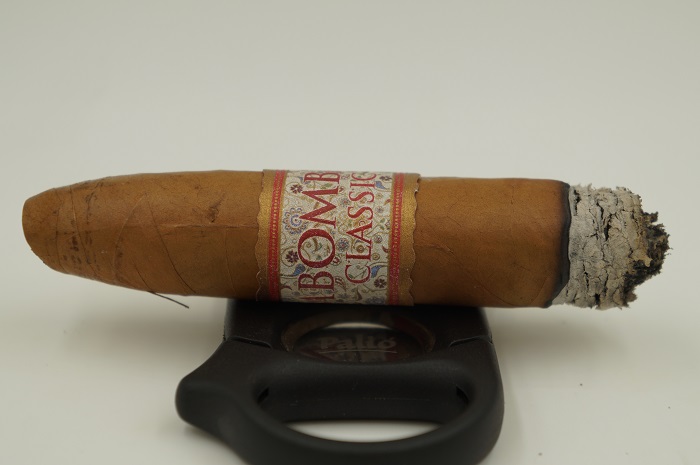 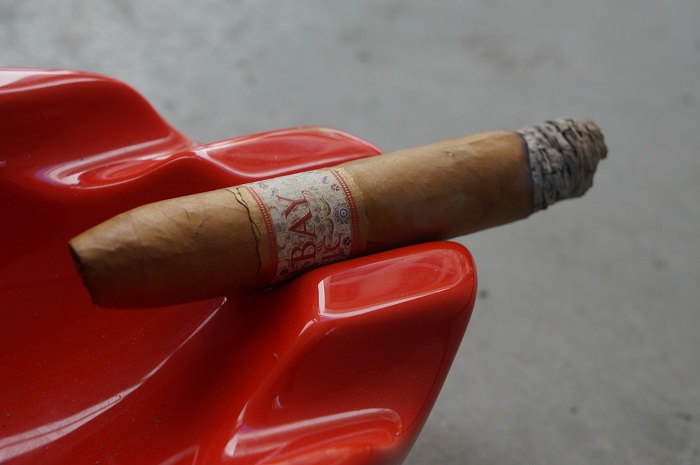 The second third wavers back and forth between having a rather average tasting profile providing sharper black pepper and dry wood effect or a more complex profile adding creamed bread and nuts. Within a couple draws, a great black coffee comes into the profile but it’s too bad the note never stayed. Strength and body stays medium.

As the final third begins, the oak has returned while the pine note is co-habitating, but at a slightly lesser level. There is also a slight nuttiness present. At a quarter inch in, some cream and slight bitterness are present as the oak has completely taken over from the pine. At an inch in, the oak gains a warmth to it while the cream remains in the background and the nuttiness has left. The retrohale brings a very creamy warm oak note. As the cigar comes to a close, both the warmth and creaminess have increased around the oak. The strength in this third bumped up to medium. 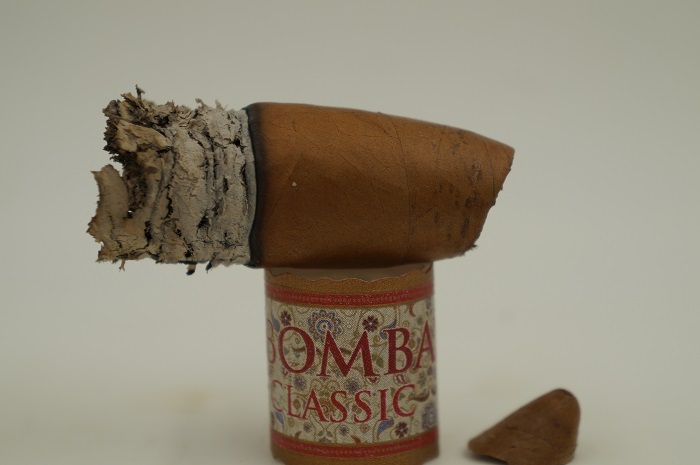 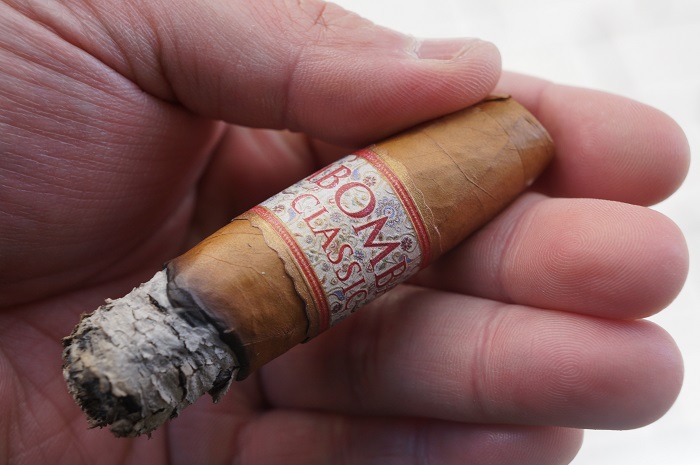 The last third thankfully shows consistency in the flavor profile. There is no longer a back and forth of less complex/tad mundane to a more complex profile. The cigar shows the black pepper backing off and increase in nuts, creamed bread and minerals. Strength and body finishes medium.

I couldn’t ask for much more from the burn as it was sharp the entire way and the ash held on through each third. 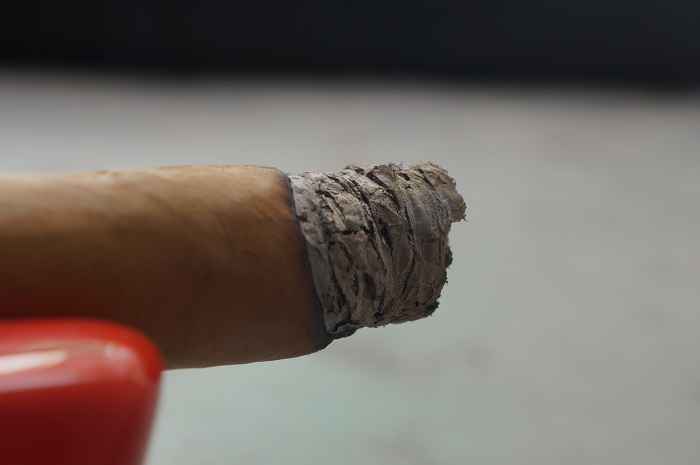 Aside from the flaky ash, the burn was flawless. Even burn, 1.5 inch average self tapped ash marks and a cool burning temperature.

The first third provided some interesting flavors and quite a bit of complexity. It was odd that the second third changed up so much from the previous profile and was fairly average. I was happy to see the final third gain back some of the core flavors and a better overall profile than the second. Construction was fantastic and the strength level only reached medium at its fullest. I’ve come to expect pretty good cigars from MBombay and this one meets that expectation again. It doesn’t bring those unique aged wood notes that some of the other lines do, but the the profile is unique in it’s own way. This cigar is on the higher cost side, but as most of the MBombay offerings, it can earn that. If you like a good dose of flavor with a lower strength level, then this is a cigar that is well worth seeking out. I’m looking forward to smoking more.

Creating the ideal resistance and air flow, the draw was perfect.