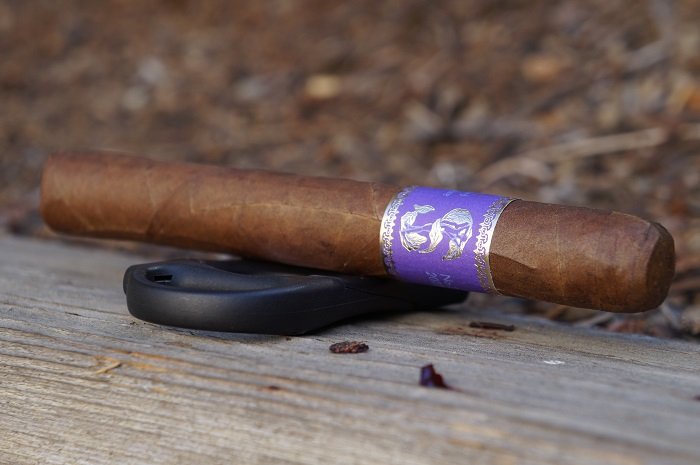 Aaron: The wrapper on the Matilde Limited Exposure No. 2 is between light and medium brown and has some decently raised veins that carry a lighter color to them. The seams are smooth while the caps have some lifting edges. The band is purple and gold with the company logo on the front. The line name is on the left and the iteration and year on the right. The aroma from the wrapper is musty earth with mild spice while the foot brings a mix of cedar and shortbread cookies. The pre-light draw is mellow and brings spicy cedar and shortbread cookie along with a mid-level spiciness on my lips.
Seth: Finished with a Colorado brown wrapper, the Matilde Limited Exposure No. 2 is silky in texture. Small veins scattered throughout. Firm in hand. Lovely coloring. Light chocolate brown. Aromas of chocolate covered raisins, cream, leather, spices, earth and stone fruit.
John: The Matilde Limited Exposure No. 2 comes in cellophane and has a UPC sticker that tears in half when the cellophane is opened. The cigar is single banded. Aromas from the wrapper included light, sweet bread, syrup and honeysuckle. From the foot, there was tobacco, hay and a mild mustiness.
Jiunn: The Matilde Limited Exposure No. 2 has a Colorado maduro wrapper shade. Veins are roughly pressed, seams tight, bunch and roll with minor lumps and head well wrapped. Aromas from the wrapper give prunes and barnyard. Aromas from the foot tell of spicy cedar and barnyard. Cold draw tells of cedar, hay and bread yeast. 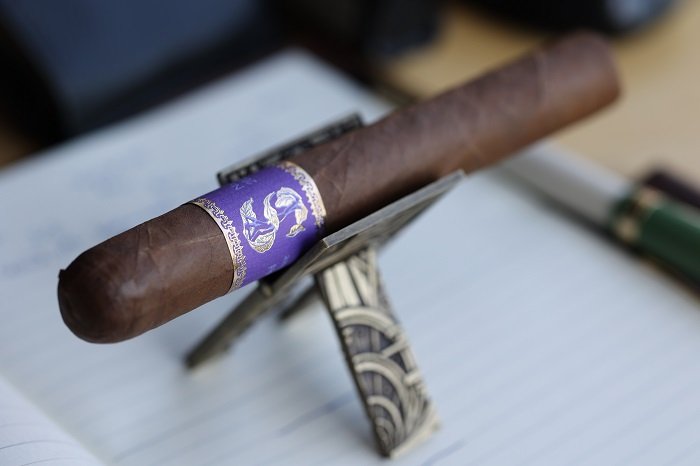 Aaron: The cigar begins with dense, slightly musty cedar and some baking spice. At a quarter inch in, the cedar gains a light toast note. At a half inch in, the baking spice is very mellow. The retrohale is toasted cedar and mild baking spice. At an inch and a half in, the toast level becomes a bit heavier. As the third comes to a close, the profile is heavily toasted and lightly musty cedar up front with baking spice a fair distance behind. The strength was right at medium.
Seth: The first third starts out with some light cream notes that are paired with some hay and grass qualities on top of this soft nutty quality. Bits of peanuts and cashews. Toast as well with some faint red pepper. Medium in strength and body.
John: A mild spicy wood starts things off and adds a combination of creamy sweetness, and medium spicy wood into the post draw. Some earth mixes with spicy wood through the retrohale. That spice moves up to medium-full intensity quite quickly. Some time later, the spice has reduced to medium-minus strength. Some bread and creamy sweetness moves into the center of the profile as the first third continues to develop. I’m able to pick out cinnamon in the spices moving towards the halfway point. The general flavor intensity has moved from medium-full to medium-minus by the halfway mark. Milk chocolate coming through at the end of the draw in the bottom half.
Jiunn: The first third has an overall nice flavor profile. Lots of sweet bread, followed by cedar and accented cardboard and wood tannins. Retrohaling gives a deep spicy cedar note, followed by rich sweet breadiness. The finish has a soft lingering dry red pepper spice. Strength and body is medium. 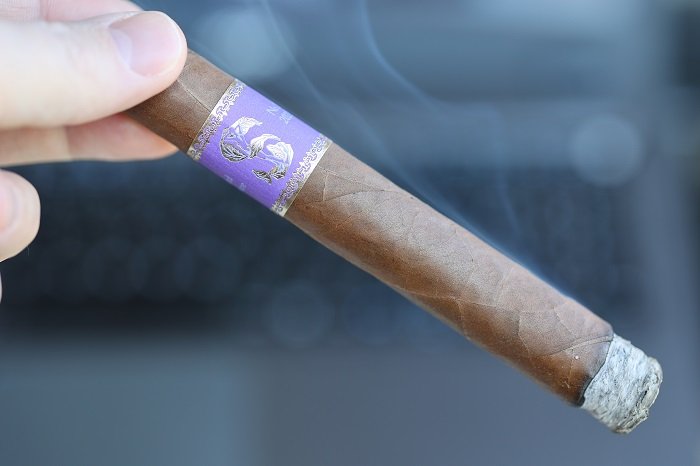 Aaron: As the second third begins, the overall profile is now a bit dry. At a quarter inch in, some dry earth joins the profile. At three quarters of an inch in, the dry musty, toasted cedar and dry earth are now even up front. The retrohale is musty, toasted cedar, dry earth and mild baking spice. As the third comes to a close, the profile is musty, heavily toasted cedar and dry earth even up front with baking spice in the background. The strength remained at medium.
Seth: The second third delivers a flavor profile of dry cocoa that is paired with some grass and hay notes. Cereal qualities as well. More spice present in this first third, and there is some sweetness and earthiness present with the pepper. Like before, medium in strength and body. Maybe close to medium-full.
John: Bread, spices and sweetness combine as a general baked goods combination of flavors going into the second third. Creamy wood is finishing the draw into the post draw, where it becomes largely dry wood. Some medium dry wood is lingering between draws. As the second third progresses, spices ramp back up in strength to medium, sitting on the post draw. Sweetness on the post draw offsets the dry wood as it continues.
Jiunn: The second third has the same flavors as the first third, but the flavors taste more cohesive. The soft notes, tannins and spice all play off of each other quite nicely. Strength and body is still medium. 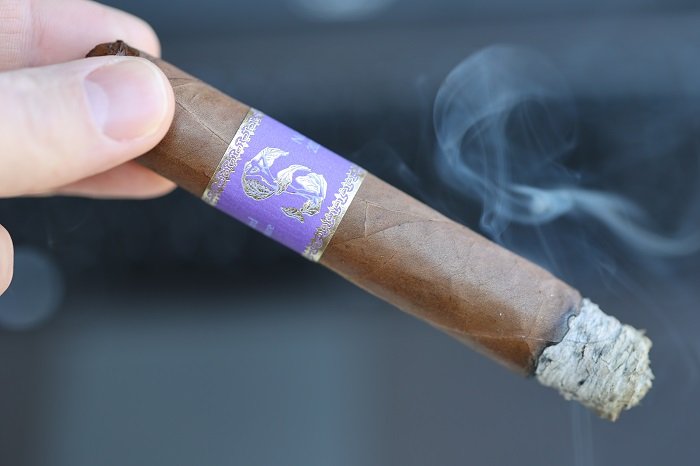 Aaron: As the final third begins, the heavy toast transitions to light char. At a half inch in, the baking spice is no longer present. The retrohale is now just musty, toasted cedar and dry earth. As the cigar wraps up, the profile is an even mix of musty, lightly charred cedar and dry earth. The strength bumped up to slightly above medium.
Seth: The final third delivered a flavor profile of dry earth with some hay and wood notes. Some cereal qualities were present, red pepper as well, and more wood and hay on the finish. Medium to medium-full in strength and body.
John: The profile starts out very similar to the second third, as sweet bread, spices, with dry wood into the post draw. Sweetness returns to the post draw and brings with it light-plus spices, which manage to balance out the dry wood. As the last third settles in, some milk chocolate is present at the end of the draw. Some tannins are accenting the post draw wood not long after. The wood picks up in strength to medium, eventually moving to the front of the profile near the halfway mark.
Jiunn: The final third has too much presence of wood tannins and cardboard, which is exactly what I wasn’t hoping for. The change deteriorates the other flavors. Strength and body finish the same medium. 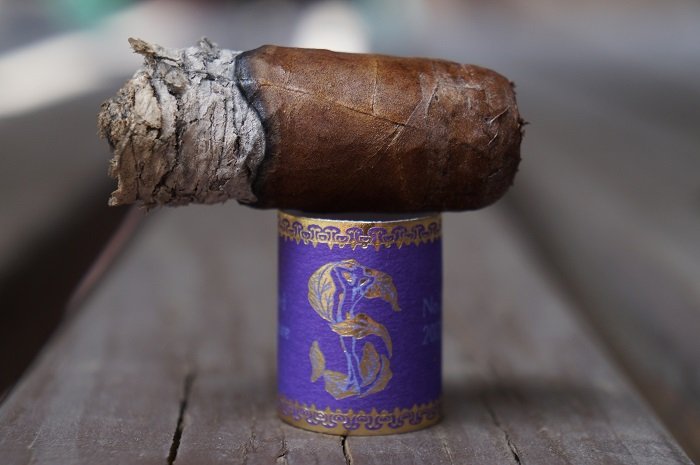 Aaron: The burn was straight throughout and the ash held on in inch and a half increments.
Seth: Very nice burn from start to finish.
John: The burn started out quite straight with the ash holding on in one inch increments. The burn was straight through the second until the halfway point where it became uneven, eventually correcting itself. The burn became uneven in the last third, requiring a touch-up.
Jiunn: Aside from the slight issues with flowery ashes, the burn performance was great. Overall even burn, cool burning temperature and good smoke production. 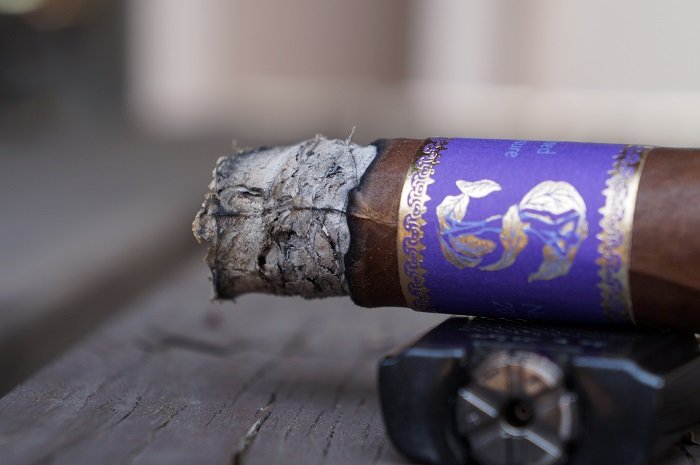 Aaron: The cigar began with dense, slightly musty cedar and some baking spice. The cedar gained a toast note fairly quickly. The second third saw some dry earth join in. The final third saw the toast note transition to light char and the baking spice dropped out. Construction was absolutely perfect. The Matilde Limited Exposure No. 2 had an average flavor profile through the first two thirds as it seemed a bit flat. Just a basic combination of flavors and a bit dry. The final third dropped down a level as the char became present and the baking spice dropped out. Between this and the No. 1, I’d slightly lean towards the No. 1 as it finished a bit better. I just don’t see coming back to this and hope to see some improvement in future iterations.
Seth: Absolutely loved the Matilde Limited Exposure No. 2. So much better than No. 1. The first two thirds were so well done. Would have been great to have the cigar finish in that manner. Complex blend with a lot of flavors. Unique profile I would say as well. Really shows the qualities of Matilde that I have always loved and missed in recent years. This may be irrelevant, but the blend seemed to be more diverse than past blends from the company. They seem to put focus on the blend in the cigar description, which makes me think they spent time on the blend and with the tobaccos. Will revisit this cigar.
John: The Matilde Limited Exposure No. 2 is an impressive improvement over my experiences with the No. 1 release. There was a lot of layers of complexity, some intensity that came and went, and nice balance. The last third was almost there, but was still quite pleasant. The draw was slightly into the open spectrum, and the burn required a minor touch-up. The Limited Exposure No. 2 impressed me and I’d happily smoke this again. Total smoking time was 2 hours and 15 minutes on the nose.
Jiunn: The Matilde I know makes some of the best fullest flavor and balanced cigars that I’ve had. So when a new release comes out, I hope they don’t deviate from what they do best. In the case of the Matilde Limited Exposure No. 2, they did it again. The flavors of sweet bread, followed by cedar, accented cardboard and wood tannins were tuned just right. Well done.