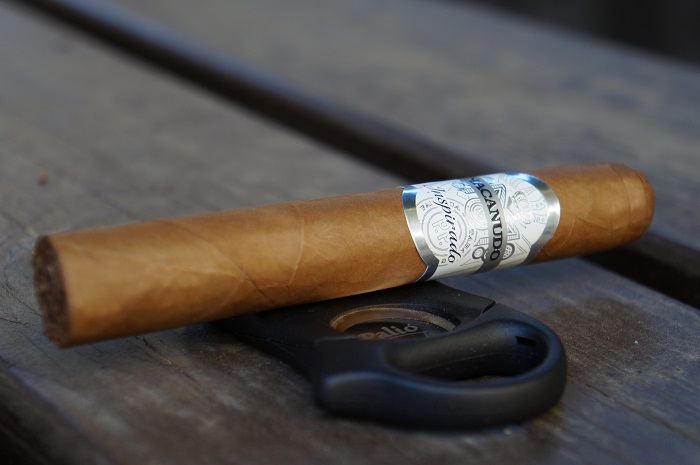 The wrapper is a nice golden brown with a couple of slightly raised veins present. The seams are easily noticeable just due to the color of the wrapper and lines being more apparent. The head is finished off with a well applied double cap. The band is white and silver with the text in black and goes well with the wrapper color. The aroma from the wrapper is a mix of hay and light graham cracker while the foot brings more hay and some leather. The pre-light draw is quite interesting as it reminds me of a sweet cereal note along with a pretty decent spicy tingle on my lips. 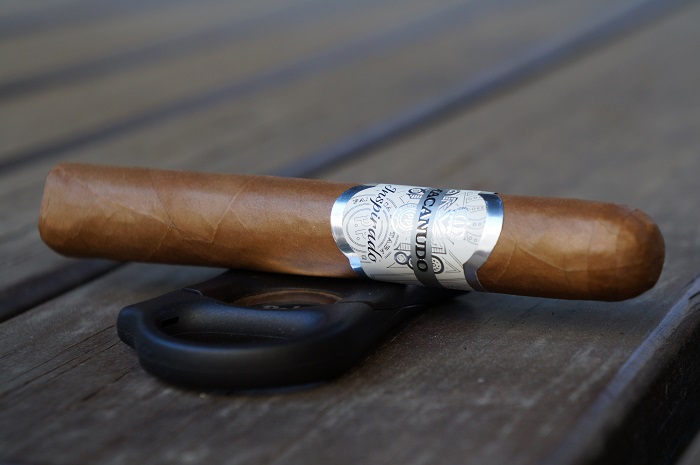 The wrapper on the Macanudo Inspirado White Robusto had a nice smooth wrapper with evenly pressed veins. For aromas, I picked up light cedar on the wrapper and sweet tobacco from the foot. 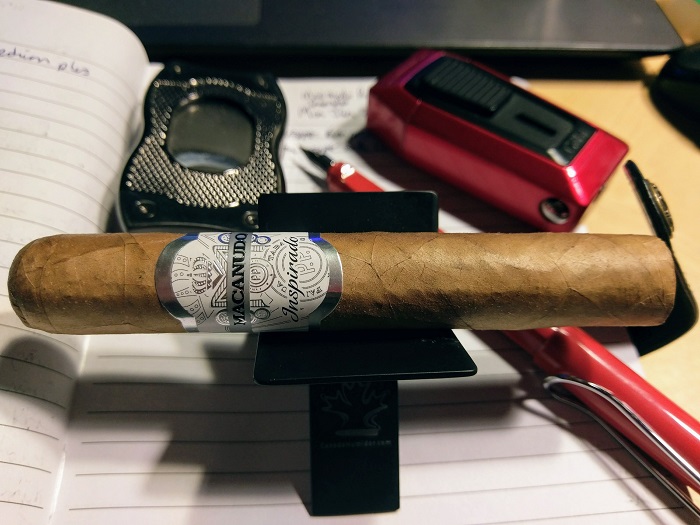 The cigar begins with some wood and black pepper and some harshness. At a quarter inch in, the harshness is now very mild while some hay joins the wood up front and the black pepper is just slightly behind those notes. At three quarters of an inch in, some cream joins in which smooths out the profile by discarding the harshness. At an inch in, the hay and wood remain up front with a slight bite while the cream and pepper are in the background. The retrohale is a mixture of wood and hay. The strength in this third was right at medium. 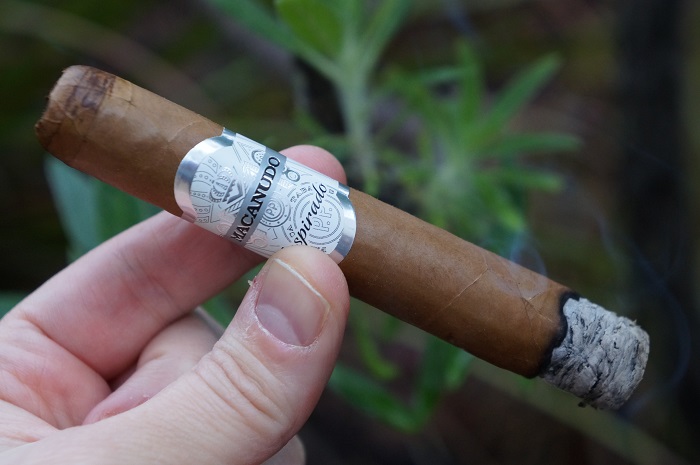 The initial flavor impressions were sweetness, with a delayed hay on the post draw. Significantly more complexity on the retrohale with some medium-minus level of spices. As the Macanudo Inspirado White settles in, there is some nuttiness coming through on the post draw, and pepper that lingers on my lips and the middle of my tongue. As the first third progresses, the pepper joins in with the spices on the retrohale, and the strength level continues to build to a medium plus intensity. After the first inch, the intensity falls off suddenly to a light plus, with the pepper still lingering on the front of my tongue. That initial sweetness also builds up in complexity, with the spices taking over from the pepper as the first third winds down. 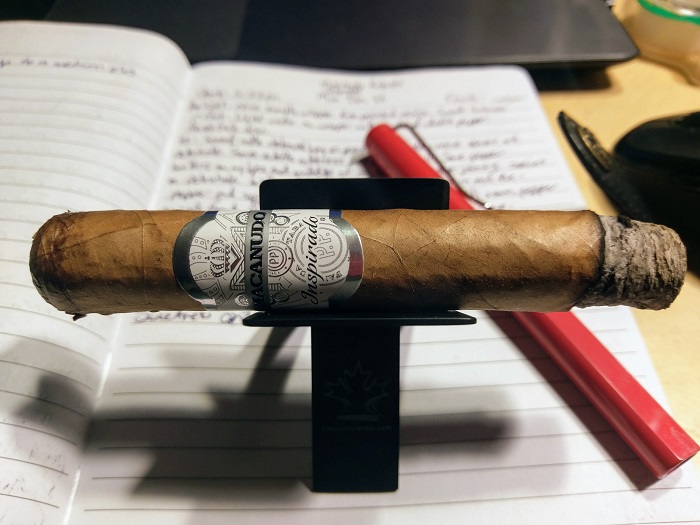 As the second third begins, the cream goes away and some harshness returns. At a half inch in, the wood gains some char which pushes the harshness out again. The hay note really isn’t detectable anymore and the pepper is very faint in the background. At an inch in, the profile is just charred wood and hay. The retrohale presents the wood and hay without the char. The strength in this third remained at medium. 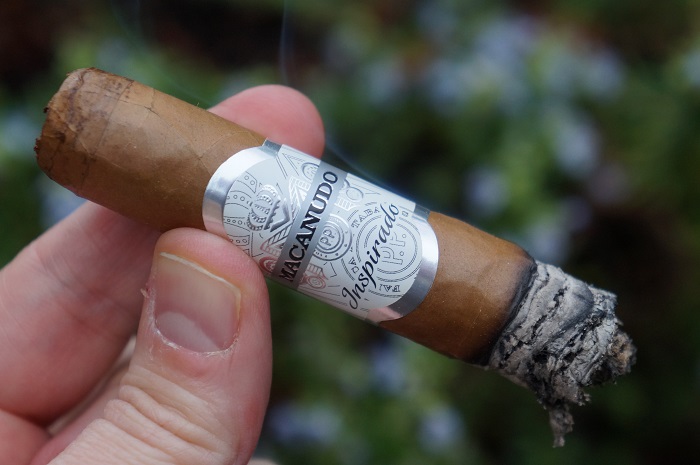 During the transition to the middle third, some cedar notes are detectable on the regular draw. The sweetness continues to evolve, now mixing in to balance out the spices. Once the middle third has established itself, some post draw leather develops, and the cedar starts to linger between draws. That leather evolves as the middle third progresses, from a light plus to a medium-minus in intensity. 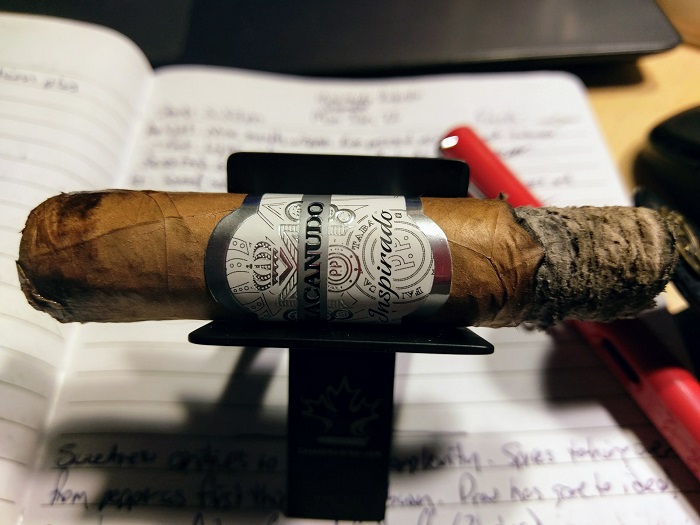 The second third thankfully shows some relief from the overbearing wood bitterness. The range opens up such that new notes of citrus, minerals and ground coffee is introduced mixing well with the white pepper, cedar and mixed nuts. The wood bitterness is most realized on the finish, still layering the entire palate being long and lingering. Strength is somewhere in between medium to medium plus, while body stays medium.

As the final third begins, the char bumps up a bit on the wood while the hay is still present in the background. At a half inch in, the char comes back to the point it was before, The retrohale is now a creamy hay note. At an inch in, the cigar begins to heat up a bit which brings some mintiness to pair with the charred wood and hay. This is how the cigar finishes out. The strength in this third bumped up to slightly above medium. 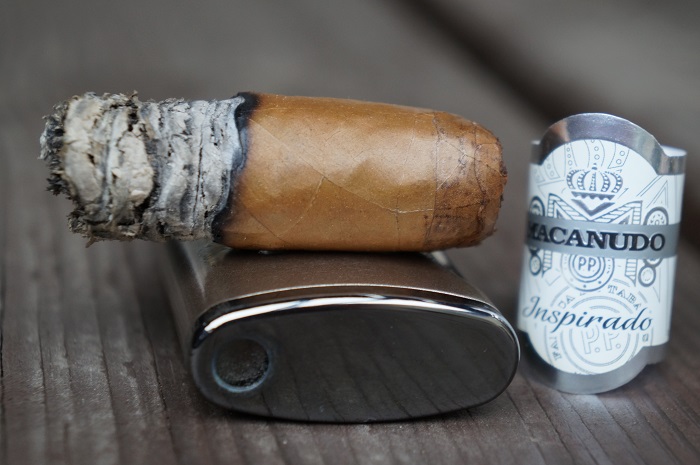 Once the Macanudo Inspirado White reaches the final third, the spice intensity has fallen back down to a light level, with the pepper still lingering as a background note between draws. The sweetness is down in intensity and becomes the primary flavor in the final third. All of the flavors are still intensified through the retrohale, with the spices reaching a light plus. As the final third settles in, some post draw hay returns at a light plus, bringing with it light vegetal notes. 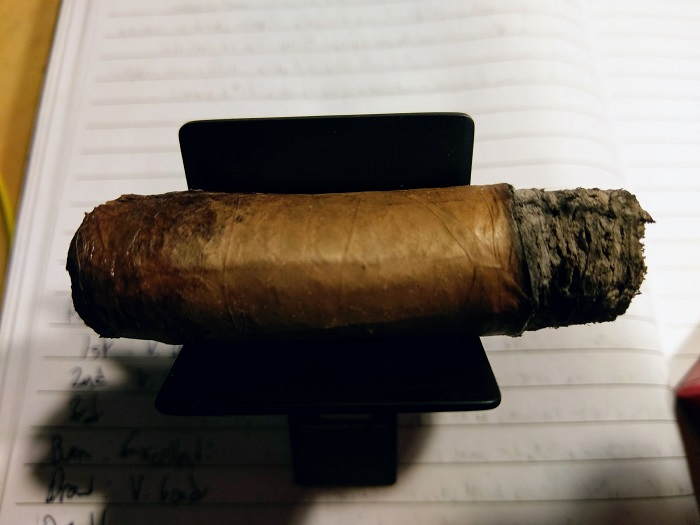 The first half of the last third reverts to the overbearing amount of wood bitterness. But the latter half shows the bitterness once again tapering off, such that the profile is namely minerals and white pepper. The finish also picks up the minerals as well as a nice baking spice, with subdued bitterness. Strength is still somewhere in between medium and medium plus, and body medium.

The burn line was slightly wavy but always kept up with itself. The ash held on in inch and a quarter increments.

The burn on the Macanudo Inspirado White was nothing short of amazing. Not only was the ash holding on in two inch increments, but it would not drop off despite me knocking it against my ash knocker.

The draw had the perfect amount f resistance that I prefer.

The cigar started out with some harshness and settled down towards the end of the first third. From there it provided some traditional Connecticut shade flavors. Strength was right around medium, so slightly higher than a traditional Connecticut shade profile but nothing overwhelming. Construction was fantastic and didn’t need any attention. For those that like this profile, it’s well worth checking out as the price point is very attractive. For me, I’m not sure it’s something I’d track down to smoke more of as I feel there are lots of cigars that provide this experience as well as other that can provide more.

Using my v-cutter, I would have rated the draw as excellent, however the cigar started out resistant and didn’t open up until the end of the first third.

As a cigar reviewer, I often find myself being more critical of the more mass market cigar brands. As such, I feel like the Macanudo Inspirado White Robusto truly stood out as an interesting cigar with great flavor complexity. I would not hesitate to recommend this cigar to a wide array of cigar smokers, and will be adding it to my purchase list for 2018.

Draw was perfect. The ideal resistance and air flow.

The flavor experience is a bit polarizing. At times I thought it was a good cigar with a nice array of flavors giving good depth of spice, earth, natural sweetness and fruit undertones. But at other times (most of the time), the wood bitterness was so full that it was all that I could truly taste. Due to this inconsistency, the cigar was unfortunately an overall average experience.