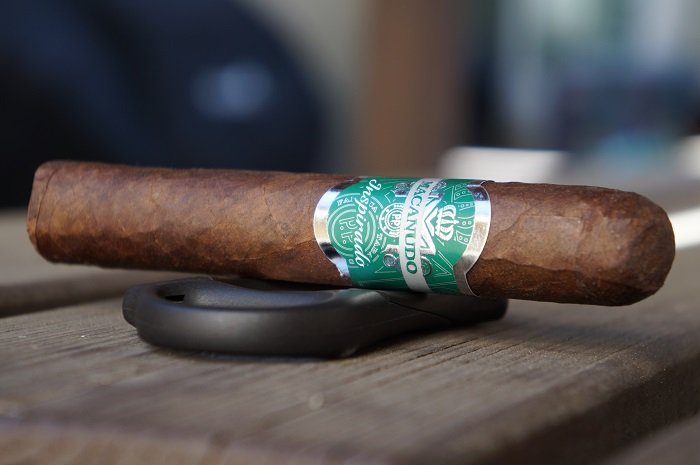 Aaron: The wrapper on the Macanudo Inspirado Green Robusto is a marbled medium brown and feels gritty along with some slightly raised veins. The seams are smooth and barely visible due to color variation while the head is finished with a decently applied double cap. The cigar if fairly light in hand. The band is the traditional design for the Inspirado line and carries a green, silver and white color combination for this variant. The aroma from the wrapper is lightly damp wood, earth and cocoa while the foot brings wood, tobacco sweetness and some spice. The pre-light draw brings cedar that has a nice depth along with a mid-level spiciness on my lips.
John: The Macanudo Inspirado Green Robusto is cellophaned and has a UPC sticker that unfortunately tears in half when the cello is opened. The cigar sports a rustic, toothy wrapper, and had aromas of light wood. From the foot, I picked up on faint hay and sweetness. 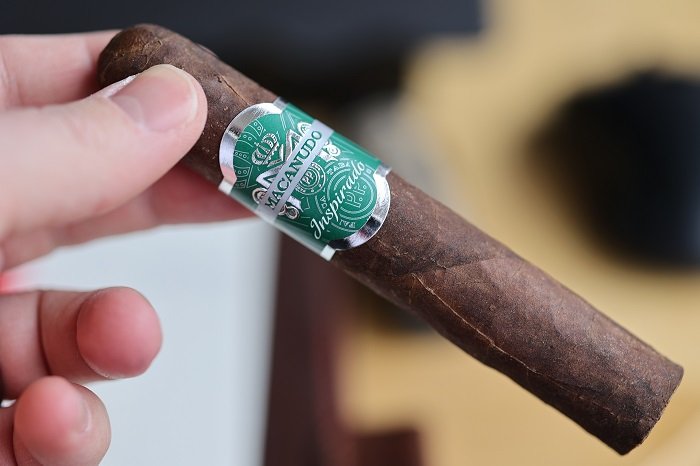 Aaron: The cigar begins with a mix of dark wood and heavy black pepper. At three quarters of an inch in, some dry earth joins the profile. The retrohale has an intense black pepper zing with wood following. At an inch and a quarter, some light cocoa powder joins in. The strength in this third was slightly above medium.
John: My first third review experienced opened with hay and light wood. Sweet, light plus baking spices joined the retrohale after a few puffs. Not long after, post draw pepper settled in at medium strength. There were no other flavor changes or evolution to speak of for the remainder of the first third. 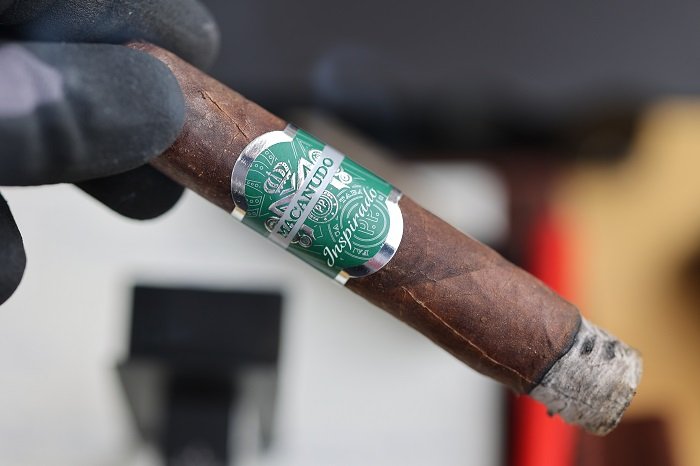 Aaron: The second third begins with the dark wood up front, then dry earth and black pepper right behind and cocoa powder light in the background. At a half inch in, the cocoa has departed. The retrohale is now wood and dry earth. At three quarters of an inch in, the black pepper is pretty light. As the third comes to a close, the profile is wood and dry earth with mustiness joining in the background and the black pepper has departed. The strength in this third remains at slightly above medium.
John: The second third immediately had medium strength spices carrying the profile. Light leather was finishing the post draw as the second third has a chance to settle in. Once again, the flavors didn’t evolve or provide any changes for the remainder of the third. 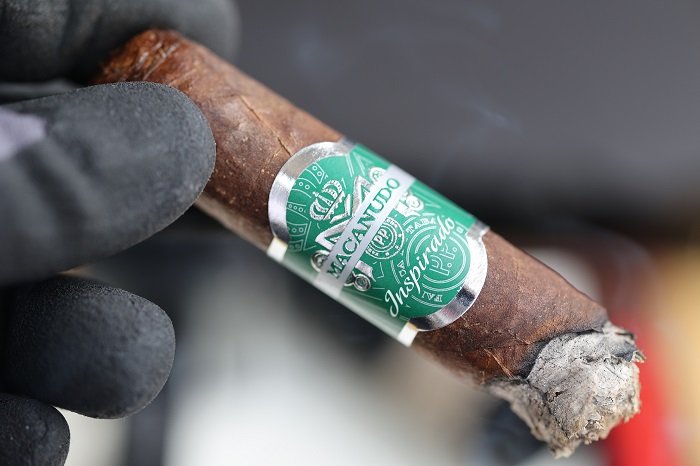 Aaron: As the final third begins, some char joins the wood and brings a slight bitterness. At a half inch in, the char and bitterness both increase. The retrohale remains wood and dry earth. As the cigar comes to a close, the bitterness has lightened up while the profile is charred wood and dry earth. The strength in this third remained at slightly above medium.
John: Wood and baking spices led the profile into the last third. Toasted char established on the palate as the last third progressed. 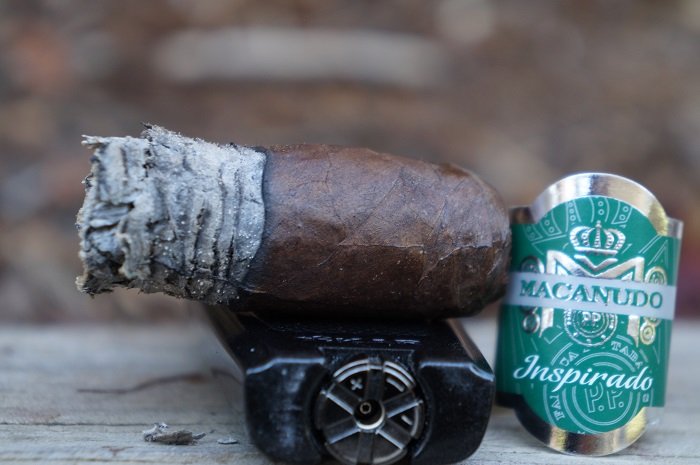 Aaron: The burn was perfect throughout and the ash held on in inch and a quarter increments. The cigar did burn fairly fast.
John: The burn was quite straight through the first third, and uneven in the second third which eventually corrected itself. Ash held on well up to 1-1/2 inch increments. 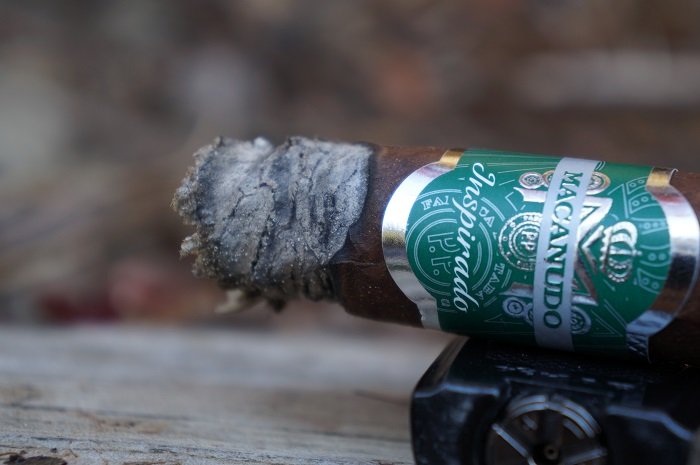 Aaron: The draw started a bit loose, but by the halfway point it was right at the level I prefer.
John: The draw was perfect, right in the ideal zone between open and resistant.

Aaron: The cigar began with a mix of dark wood and heavy black pepper. Some dry earth joined a bit later and then a bit of cocoa powder. The second third saw the cocoa and black pepper depart. The final third saw some char join the wood as well as some bitterness. Construction was really good and strength was slightly above medium the whole way. The Macanudo Inspirado Green Robusto has a fairly heavy profile that is a different Macanudo than what most are use to. The enjoyment level was pretty average throughout and dropped down a bit in the final third as the char and bitterness joined in. This is a cigar that I don’t see myself retruning to, but for those that like a heavier profile, it might be a way to introduce them to the Macanudo brand, and for that, I could see this being a successful release for the brand.
John: The Macanudo Inspirado Green Robusto was not what I would expect from a cigar with a Brazilian Arapiraca wrapper. I was met with rather milquetoast flavors that were linear through each third. While not unpleasant for the first and second thirds, it did not provide enough to engage my attention. I would rather reach for the Macanudo Inspirado White, Black or Palladium, if I was smoking something from the Inspirado portfolio. As is typically my expectation of cigars from General Cigar, the construction was excellent. Total smoking time was a brisk 1 hour and 25 minutes.