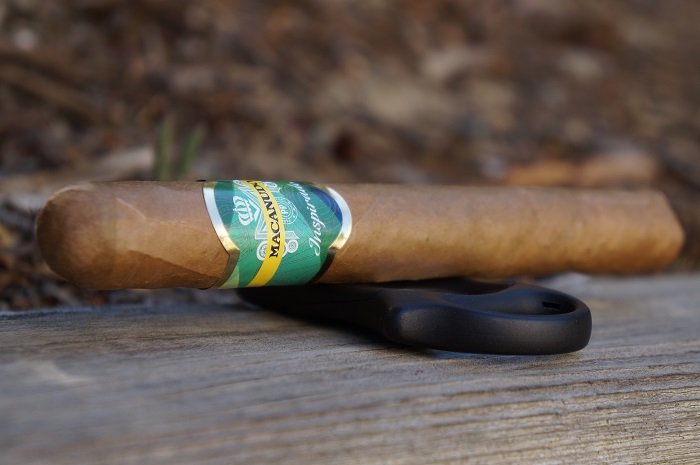 Aaron: The wrapper on the Macanudo Inspirado Brazilian Shade Toro is medium tan and has some decently raised veins present. The seams are smooth and the caps are very well applied. The band is the traditional Inspirado design but carries the colors of Brazil for this line. The aroma from the wrapper is a mix of carboard and hay while the foot brings a slightly fuller version of the same. The pre-light draw brings cedar and a subtle artificial sweetness.
Seth: I do not find the Brazilian Connecticut Shade tobacco to be visually pleasing. I don’t think it has the visual qualities of Ecuadorian Connecticut or true Connecticut Shade, but it does appear to have more hardiness. Silky and gritty in texture, the Macanudo Inspirado Brazilian Shade Toro sports small to medium sized veins. They are not overly present, but they are noticeable to the touch. The cigar has a coloring that is right between Claro and natural, and with the right light it shows some light Colorado qualities. I am picking up aromas of cedar, lemongrass, spice and tobacco.
John: On pre-light examination it’s obvious immediately the Macanudo Inspirado Brazilian Shade Toro has a uniformly light tan, shade colored wrapper. The cigar comes in cellophane, with a UPC sticker that tears when the cellophane is opened. There’s a curious combination of mild tropical fruit and musty wood aromas from the wrapper, something I can’t ever recall picking up in a previous review. From the foot, sweet tobacco, and possibly a faint raisin aroma.
Jiunn: The Macanudo Inspirado Brazilian Shade Toro has a claro shade to the fragile wrapper. Veins are extremely well pressed, seams tight, bunch and roll even and head well wrapped. Aromas from the wrapper give hay, cedar and a hint of mint. Aromas from the foot tell of roasted nuts and hay. Cold draw gives the same as the foot aromas. 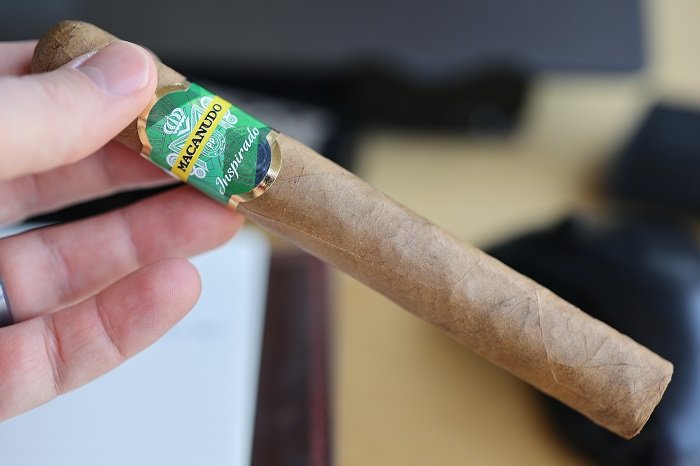 Aaron: The cigar begins with dry cedar, light mustiness and this very subtle artificial sweetness. At three quarters of an inch, a mild black pepper joins in. The retrohale is dry cedar and mild black pepper. At an inch and a quarter, the mustiness picks up a bit. As the third comes to a close, the profile is musty, dry cedar along with mild black pepper and the subtle sweetness peeking through on random draws. The strength in this third was mild-medium.
Seth: The first third opens with some lovely lemongrass and coffee notes. There are some creamy qualities present as well, and I am getting some cedar and hay on the finish. There is this sweet coconut shaving present also, and the cigar smokes around a medium level for strength and body.
John: The first third opens with a fairly typical Shade flavor combination of hay, wood, with delayed artificial sweetness lingering on my palate through the post draw. What’s quite curious is that I smoked two cigars for review, and the second cigar showed no signs of the artificial sweetness that I picked up from the first cigar. Dry wood finishes the draw as the first third settles in, and that dry wood carries into the post draw. Some baking spices push into the flavor list by the 40 minute mark. Overall, the first third presented like a fairly traditional Shade blend, with the first cigar having artificial sweetness, and the second cigar absent that sweetness.
Jiunn: The first third is mild in every sense. Mild flavors of hay and dried nuts. Not even on the retrohale am I getting deeper flavors. Mild in sense of strength and body as well. The finish, yes you guessed it, mild with lingering hay and dried nuts with an overall dryness. 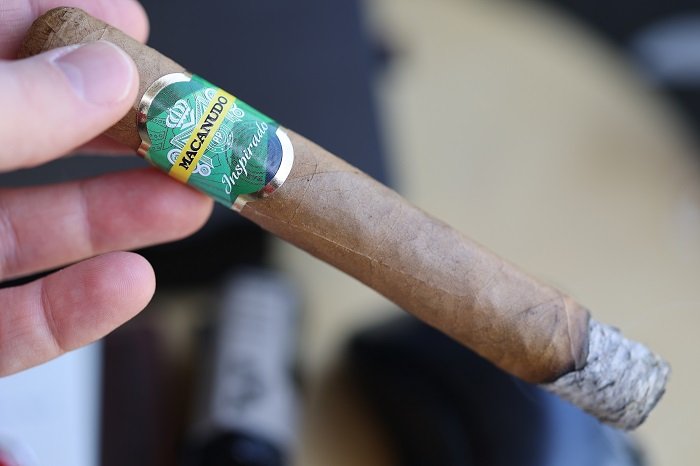 Aaron: The second third continues with how the first finished. At a half inch in, the black pepper becomes fuller, has a long finish and is sitting just a bit behind the musty, dry cedar. The retrohale is now toasted and musty cedar with black pepper a bit behind. At an inch and a half in, the overall profile is fairly dry as a dry hay joins in. The strength in this third bumped up to slight below medium.
Seth: The second third begins to show some pepper and spice, and it is pairing well with the cedar, cream and hay notes. There are faint lemongrass qualities present, and it is smoking at that medium level like before for strength and body.
John: The second third starts things out with dry cedar and more of the artificial sweetness, with mild cedar carrying into the post draw. Again, like the first third, the second sample had no indication of artificial sweetness. Dry hay settles into the middle of the profile as the cigar progresses, and there are no other flavor changes through the second third.
Jiunn: The second third is still boringly mild. Hay and dried nuts is all I’m getting. The only thing that changes is the profile getting dryer, which requires many sips of water. Strength and body is still medium. 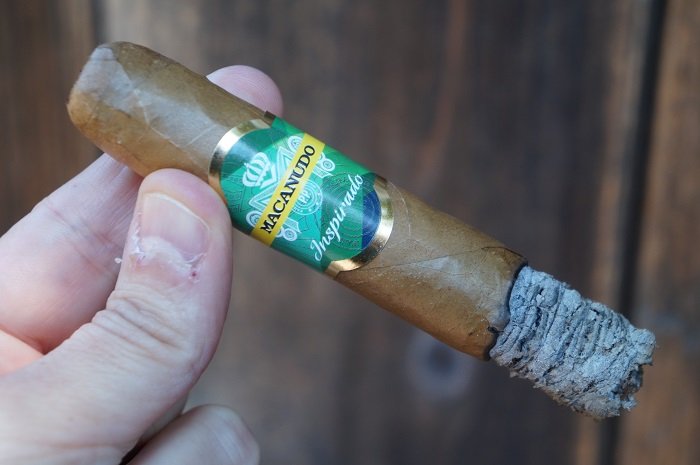 Aaron: As the final third begins, the dry cedar takes on more of a burning construction paper note while the black pepper is now dull and mild. At a half inch in, a light bitterness appears. The retrohale is a musty, burning construction paper note. At an inch in, the dry cedar reappears and is side by side with the burning construction paper note. As the cigar wraps up, the dry cedar and burning construction paper are even with a mild, dull black pepper in the background. The strength in this third bumped up to medium.
Seth: The final third delivers a flavor profile of cream, pepper, coffee beans and lemongrass. I am getting similar Brazilian Shade notes that I have with other offerings using this wrapper, and it is a cool profile. It has this tropical Connecticut vibe to it that I enjoy. Not for everyone, and unique, but fun. Like before, medium in strength and body.
John: Dry hay mixed with cedar take the profile into the last third. On the first cigar, the artificial sweetness is fading at this point. No other flavor changes to remark on.
Jiunn: The final third’s dryness becomes tannic as well. In terms of flavors, it’s still the boring and easy going hay and dried nuts. Strength and body finishes medium. 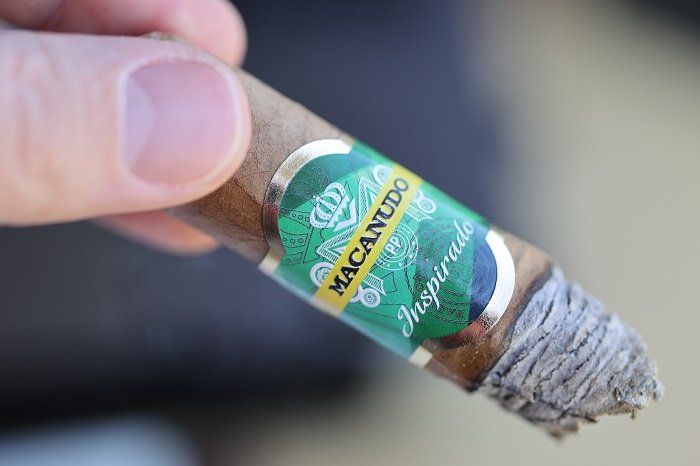 Aaron: The burn was perfect and the ash held on in near two inch increments.
Seth: Very nice construction throughout. Well made cigar that burnt well from start to finish.
John: Both cigars had fairly flawless burn, with the ash holding on up to 2 inches before I knocked it off.
Jiunn: Perfect burn performance. Even burn, solid ashes, cool burning temperature and good smoke production. 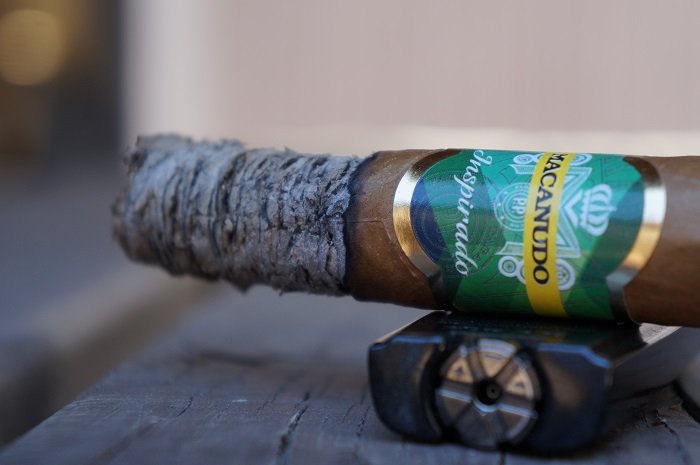 Aaron: The cigar brought a fairly typical Connecticut shade profile of dry cedar and black pepper. It maintained that profile until the final third when a burning construction paper and light bitterness joined in. Construction was perfect. The subtle artificial sweetness at the beginning was interesting but faded away after the first third and I didn’t think was a detriment to the flavor profile. While the Macanudo Inspirado Brazilian Shade Toro isn’t a cigar I’ll likely return to, I can see it doing very well for the brand as it’s a lighter strength and fairly smooth smoking experience which tends to be the demographic of the brand.
Seth: The Macanudo Inspirado Brazilian Shade Toro was a fun cigar with a nice flavor profile. Not overly complex, it was balanced throughout. It has this Summery Connecticut Shade quality which is great right now as it is Summertime. I loved the coffee, cream and lemongrass qualities throughout. They worked off each other nicely and worked well with other flavors throughout. A solid medium in strength and body, it is a cigar that many could enjoy at any time of day. Job well done!
John: After reviewing two Macanudo Inspirado Brazilian Shade Toro cigars, I struggled to find something that elevated it above any other Shade blend cigar widely available at the local B&M. The first cigar with the artificial sweetness was quite off-putting, while the second cigar was a fairly paint by numbers profile. Although I suspect this cigar will be quite successful for the Macanudo brand, I would personally be hard pressed to justify the MSRP where there are so many other similarly and superior performing blends I could choose. Given a choice between this and the Macanudo Inspirado White, I would find myself gravitating towards the Inspirado White. Both cigars had somewhat resistant draws, and flawless burn. Total smoking time averaged 2 hours and 25 minutes.
Jiunn: I think the Macanudo Inspirado Brazilian Shade Toro is the ideal cigar for a brand new cigar smoker. It’s so mild that even if the new cigar smoker inhales some smoke, he/she just may not choke on it. But for me, it was lacking in flavor and monotonous. And given that, I don’t see myself coming back to it.