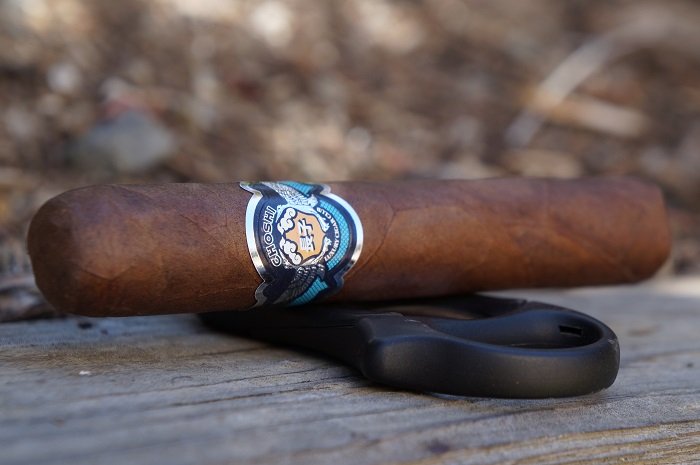 Aaron: The wrapper on the Luxury Cigar Club Choshi is medium brown, slightly darker towards the foot and has some lightly raised veins present. The seams are smooth and the caps very well applied. The band is silver, black, blue, orange and white and denotes the club and line name. The aroma from the wrapper is a mellow earthiness while the foot brings oak, bread and some spice. The pre-light draw brings aged, musty cedar.
Seth: Firm in hand, the Luxury Cigar Club Choshi is finished with a dark and oily wrapper. Dark chocolate in coloring. Has a nice maduro quality. Aromas of rich earth, raisins, chocolate, spices and leather. Wonderful. Great in hand. Band stands out against the dark wrapper.
John: The Luxury Cigar Club Choshi comes in cellophane and has a UPC sticker with integrated tear space so it remains intact when the cellophane is opened. Aromas from the wrapper included sweetness and faint bread. From the foot, a more defined lactose sweetness, clover and hay.
Jiunn: The Luxury Cigar Club Choshi has an even Colorado Maduro Nicaraguan Habano wrapper. Veins are neatly pressed, seams tight, bunch and roll even and head well wrapped. Aromas from the wrapper give sweet, roasted nuts and barnyard. Aromas from the foot tell of red pepper spice and cedar. Cold draw entails dry dirt, cedar and hay. 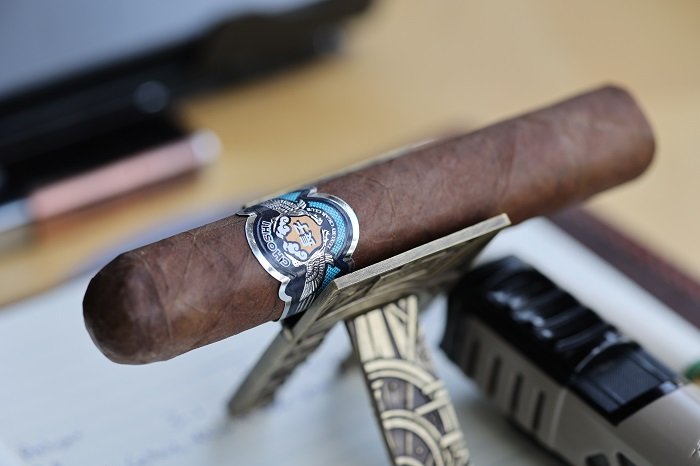 Aaron: The cigar begins with toasted, slightly bitter oak and baking spice. At a half inch in, the baking spice transitions to black pepper and the bitterness departs. At three quarters of an inch in, a light mustiness joins the profile. The retrohale is musty oak and a decent black pepper zing. At an inch and a quarter, a light earthiness joins the profile. The strength was right at medium.
Seth: The first third opens with spice notes that have some sweetness up front and pepper on the finish. There are earth, oak and leather qualities present, and there are some earth notes on the finish. This faint flavor profile that I can’t identify as well. Medium in strength and body.
John: The first few puffs bring flavors of bread and wood with faint wood and some dryness and spice into the post draw. On the retrohale, there is sweet earth, nutmeg and dry wood. The finish after the retrohale is medium-full strength spicy wood. As the first third settles in, the spices fall to a background note. Some time later, a faint chocolate note is present on the retrohale, just under the wood. Moving to the halfway point, tobacco sweetness is in the center of the retrohale. In the bottom half, dry cedar is defining the post draw.
Jiunn: The first third is fairly engaging. Primarily earth driven with dry dirt, cedar, mixed nuts and leathery tannins. Retrohaling introduces dry red pepper spice. The finish is very lengthy with leather tannins. Strength and body is medium. 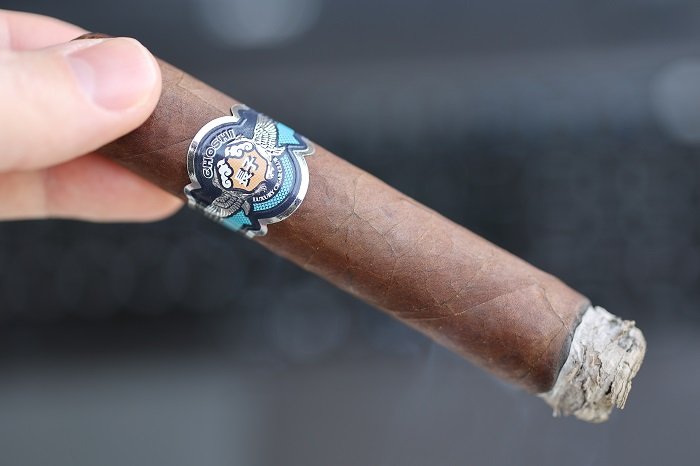 Aaron: As the second third begins, the earth has picked up a bit and the pepper has mellowed. The retrohale continues with the musty, toasted oak while the black pepper just has a light zing now. At an inch in, the earth is now even with the toasted, musty oak up front. As the third comes to a close, the musty, toasted oak and earth are even up front with black pepper a fair distance behind. The strength remains at medium.
Seth: The second third delivers this herbal and meaty spice that has this long citrus pepper finish. I am picking up those earth, oak and leather notes as well, and it is smoking at a level just between medium and medium-full.
John: The second third gets going with sweet, creamy, dry wood on the retrohale as dry, spicy wood combines into the post draw. Progressing to the halfway mark, the profile has progressively become more wood forward. In the bottom half, spices have returned to the center of the profile to add some complexity.
Jiunn: The second third introduces a main player in minerals. Important (and unfortunate) to note that the minerals do have a harsh bite to them. This overtakes much of the mixed nuts sweetness. Strength increases to medium-full, while body stays medium. 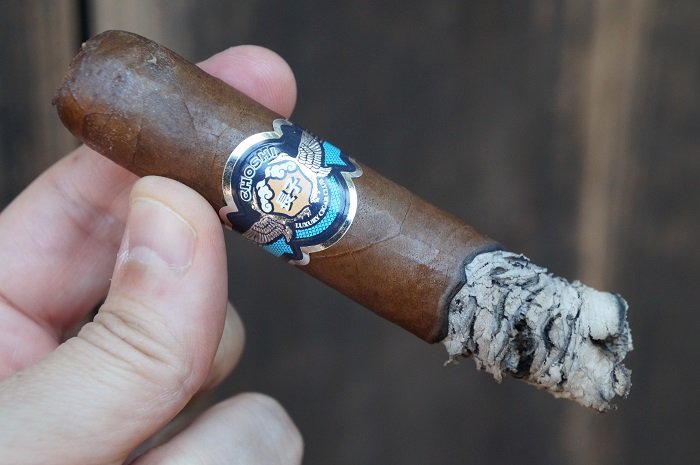 Aaron: The final third continues with the profile from the second. At a quarter inch in, the toast level increases. The retrohale is now musty, toasted oak and dry earth with mild black pepper. As the cigar comes to a close, the profile is musty, heavily toasted oak and dry earth even up front with some black pepper a fair bit behind. The strength bumped up to slightly above medium.
Seth: The final third delivers a profile of dry earth and wood. Mineral notes present as well, and there is this sharp mineral spice quality. Medium to medium-full in strength and body, this is not anywhere near the first or second third.
John: Spices and wood greet me in the last third, as lingering dry wood and spices make up the post draw. As it settles in, wood is driving the profile again. By the halfway point of the last third, earth has moved into the center of the profile. Some char accents the earth in the bottom half, becoming distracting as it continues.
Jiunn: The mixed nuts sweetness comes back from the first third, but it’s offset by the harsh mineral bite combined with a bit too much leathery tannins. Strength and body finishes medium-full and medium, respectively. 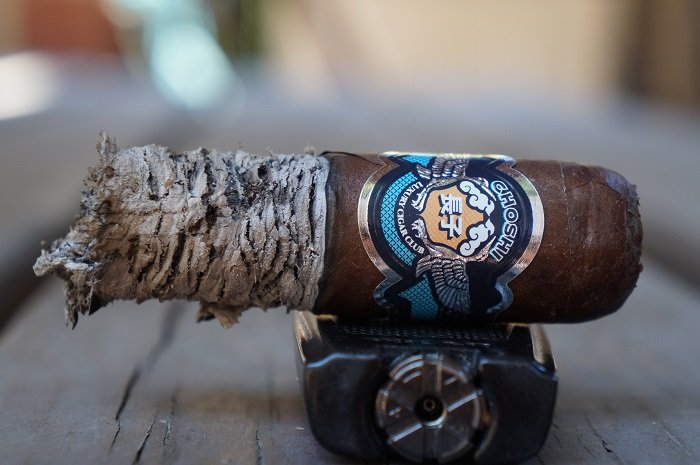 Aaron: The burn was slightly wavy at times but never needed any intervention. The ash held on in inch and a quarter increments.
Seth: Beautiful burn.
John: The burn started out straight in the first, was straight in the second and continued to be straight through the third. My only observation is that the ash had some flakiness to it.
Jiunn: Surprisingly, for AJ made, the burn performance was not perfect. The wrapper had burn issues, requiring a few touch-ups. 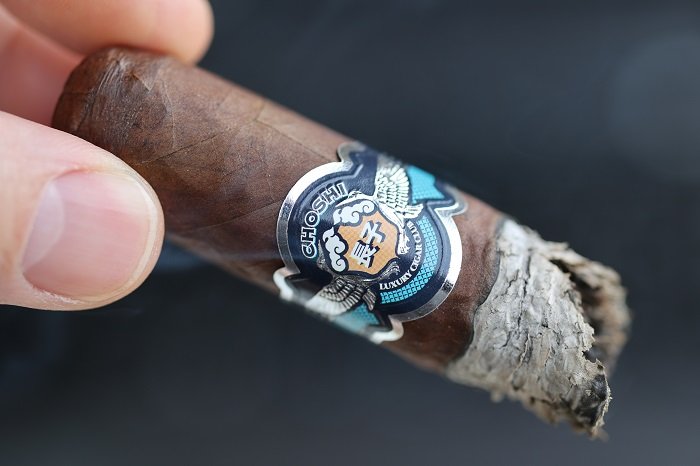 Aaron: The cigar began with toasted, slightly bitter oak and baking spice. The baking spice transitioned to black pepper fairly quickly. Some mustiness and earth joined a bit later. As the cigar progressed, the earth built up as the pepper mellowed and the toast increased in the final third. The Luxury Cigar Club Choshi had a pretty average flavor profile throughout. It was a very AJ Fernandez type profile with the toasted oak, dry earth and black pepper focus. Not a cigar I really see myself coming back to.
Seth: This Luxury Cigar Club Choshi was a well-constructed cigar that delivered an approachable flavor profile. It was not overly complex, but it had a nice core flavor. The strength and body matched well. Really a high price for a blend of this nature. I think in today’s environment, I would expect the cigar to be no more than $10.00.
John: The Luxury Cigar Club Choshi was pleasant through the first and second thirds, but the flavor profile didn’t seem to harmonize or become dynamic enough to move it into the good category. The last third started out pleasant, but as the char note intensified on the earth, it became distracting. The draw and burn were both perfect, this was a well constructed cigar. Based on the flavor profile and the associated price point, this isn’t a cigar I’d be inclined to try again. That said, I’d be more than interested to try another offering from Luxury Cigar Club. Total smoking time was a bit on the fast side, given the vitola, at 1 hour and 36 minutes.
Jiunn: This Luxury Cigar Club Choshi was a pretty spot on AJ blend with a plethora of earthiness in dry dirt, leather tannins and minerals. By no means ever a bad blend, but one that is all too familiar and in some ways, monotonous. If you like AJ, this is a blind buy for you. If you don’t, move along.