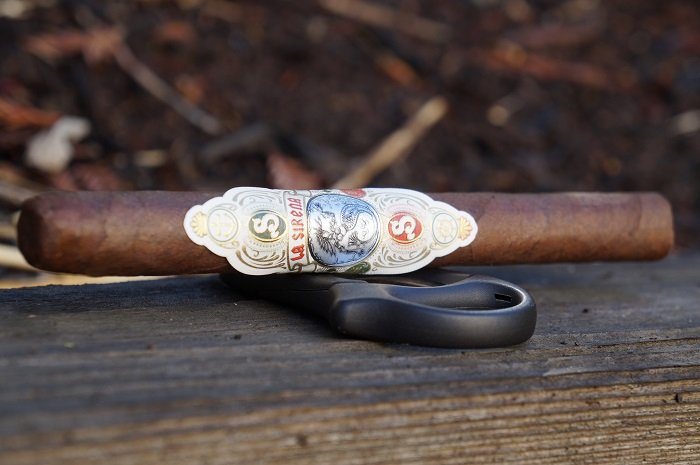 Aaron: The wrapper on the La Sirena Mexican Mermaid Lancero is dark brown with some darker colors where veins from below are pressing through. There are also some lightly raised veins present along with a fine tooth. The seams are a bit raised while the caps have some lifting edges. The band is quite large on the front, about three inches in length, and is white, gold, silver, red and white and carries the company name. The aroma from the wrapper is smoky wood and earth, while the foot brings cedar and tobacco. The pre-light draw is smoky wood and stone fruit sweetness along with a mid-level spiciness on my lips.
Seth: Finished with a lovely maduro wrapper, the La Sirena Mexican Mermaid Lancero has a chocolate coloring. There are some veins present throughout and the cigar has a natural finish. Slightly rough, but mostly smooth. There is a nice firmness with the cigar, and the cigar is giving off aromas of leather, chocolate and rich earth. Sweet spices present as well.
John: The La Sirena Mexican Mermaid Lancero comes in cellophane and does not have a UPC sticker or code. The cigar is single banded, and the band takes up just under two-thirds of the length of the cigar. Aromas from the wrapper included barnyard, some dustiness, aged wood, ash and faint peat. From the foot, there was sweet tobacco and raisin.
Jiunn: The La Sirena Mexican Mermaid Lancero has a Colorado maduro wrapper shade. Veins are well pressed, seams tight but visible, bunch and roll firm and head well wrapped. Aromas from the wrapper tell of cedar and herbal tea. Aromas from the foot give spicy and sweet roasted nuts. Cold draw gives airy cedar. 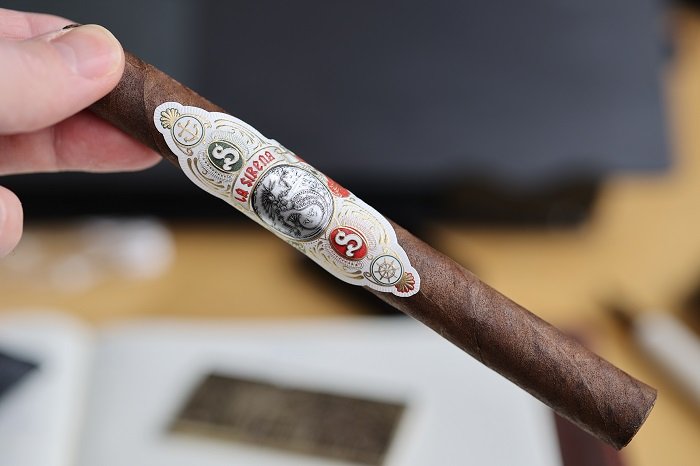 Aaron: The cigar begins with dark wood, dark earth, black pepper and bakers chocolate. At a half inch in, the pepper mellows and a light creaminess joins. The retrohale is toasted oak, earth and mild black pepper. At an inch and a quarter, the dark wood has become toasted oak and the earth is now slightly dry. At an inch and three quarters, the earth takes a slight lead over the toasted oak. As the third comes to a close, the profile is slightly dry earth up front, toasted oak right behind, black pepper a little further behind and light amounts of bakers chocolate and creaminess in the background. The strength in this third was right at medium.
Seth: The first third starts out with mocha qualities, and I am getting this espresso, cocoa and cream combo. Spice, leather and dry wood notes present as well. Touches of mineral, nut and earth qualities on the finish. Medium-full in strength and body.
John: The initial puffs brought flavors of creamy baking spices and wood, chocolate, and a spicy earth finish. The baking spices are immediately at medium strength, as the post draw is led by earth. As the cigar continues, the post draw earth fades to light-plus, as the baking spices continue to build up to medium-plus. In the bottom of the first third, mild citrus sweetness pushes into the profile.
Jiunn: The first third lacks depth and character. The profile is mainly woodsy with cedar. I get more out of the retrohale, as the cedar is paired with a dry red pepper spice. The finish is short with the same cedar note. Strength and body is medium. 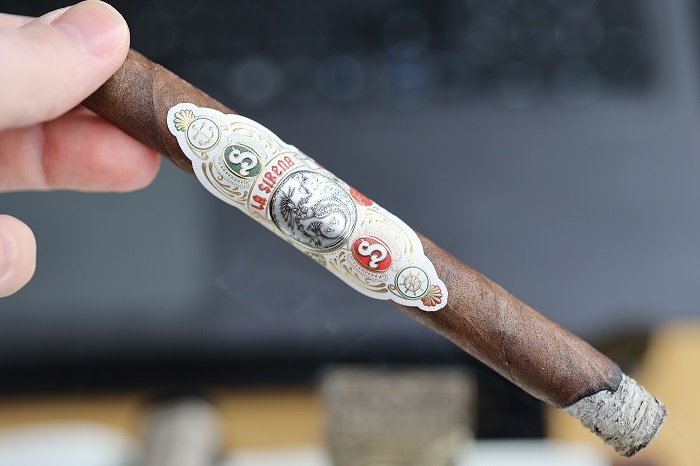 Aaron: As the second third begins, the earth and toasted oak are back to even. At a half inch in, the black pepper becomes very mild. The retrohale is toasted oak, slight dry earth and mild black pepper. At an inch and a quarter, the chocolate has departed while the black pepper has picked back up. As the third comes to a close, the toasted oak and slightly dry earth remain even with the black pepper a bit behind and light creaminess in the background. The strength bumped up to slightly above medium.
Seth: The second third shows a continuation of those mocha qualities from the first third, and it is paired with this wood, leather, nut and earth flavor profile. Pepper spices present on the finish. It starts out somewhat rich, moves into a more balanced flavor, and then finishes with a nice spicy kick. Medium-full in strength and body.
John: Sweet earth starts it off as wood moves into the center and wood and baking spice combine to finish. Creamy earth and wood quickly establish the post draw profile. As the second third settles in, mild tannins complement the wood through the retrohale. Soon after, chocolate and mild, sweet citrus joins the retrohale. Earth becomes the defining flavor note on the post draw as it progresses. By the halfway point, cedar is leading off the draw.
Jiunn: The second third continues to lack depth. The flavor profile is still one dimensional and hollow with airy cedar. The only way to get away from it is when I retrohale, which at that point, there’s some dry red pepper spice coming through. Strength and body remains medium. 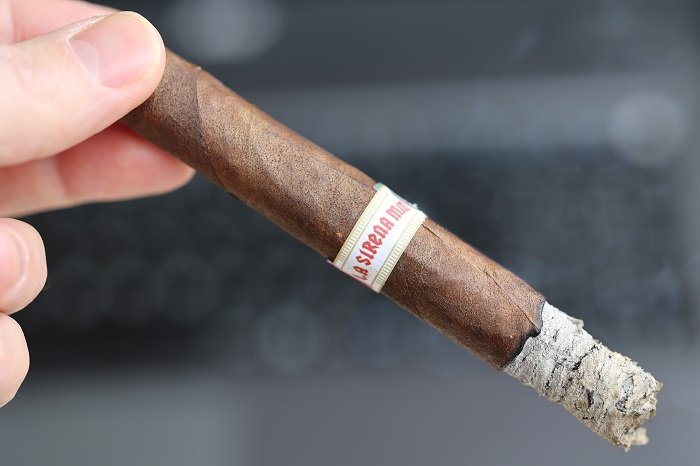 Aaron: As the final third begins, the pepper lightens up a bit. At three quarters of an inch in, the pepper picks back up and is even bolder than before. The retrohale is now toasted oak and earth with a mid-level black pepper zing. At an inch and a quarter, the toast level picks up and a light vegetal note joins in. As the cigar wraps up, the toasted oak and slightly dry earth are even up front with the black pepper just behind and light amounts of vegetal and creamy notes in the background. The strength bumped up to medium-full.
Seth: The final third delivered that medium-full strength and body level, and was paired with a flavor of earth, leather, wood, coffee and cocoa. Bits of pepper and sweet spices as well, but mostly earthy overall.
John: Leather, cedar and earth are at the front of the profile out of the gate. Creamy baking spices some time later at medium-minus strength in the center of the profile. Earth again on the post draw, this time building to medium-full strength as the last third progressed.
Jiunn: The final third introduces a dry leather component, but it doesn’t change my perspective of the cigar. It’s still one dimensional, being mainly wood driven. Strength and body finish the same medium. 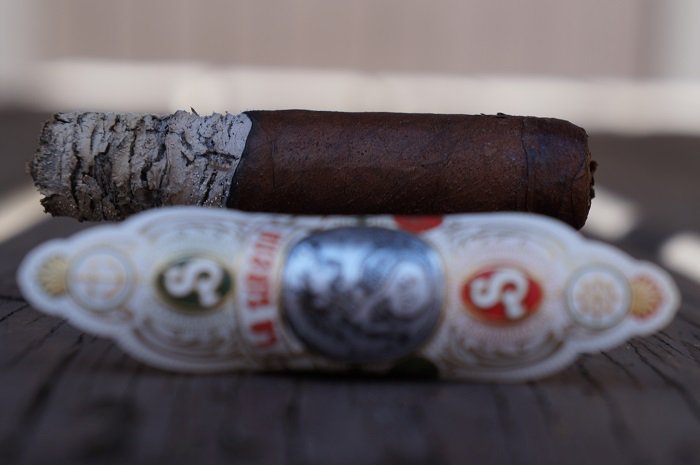 Aaron: The burn was straight the entire way, and the ash held on in inch and a quarter increments.
Seth: Very nice, even burn throughout the cigar.
John: The cigar had a straight burn all the way through. The ash was a bright white color and held on over two inches before falling off.
Jiunn: Aside from the slight issues with flowery ashes, the burn performance was great. Overall even burn, cool burning temperature and good smoke production. 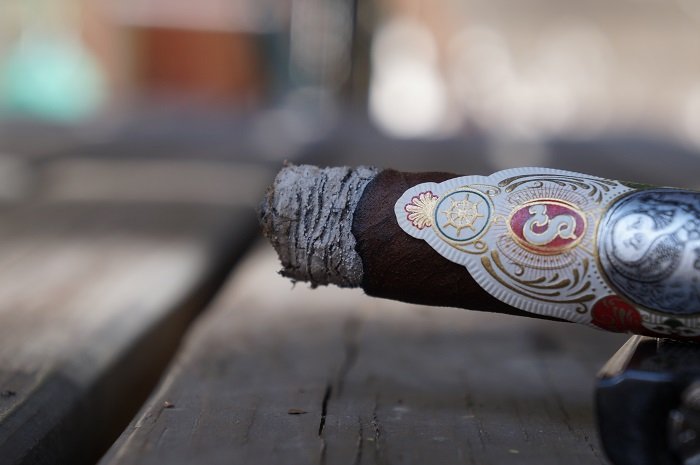 Aaron: The draw was slightly tighter than I prefer, but didn’t cause any issues with the smoking experience.
Seth: Draw had a moment where it was snug, but for the most part perfect level of resistance.
John: The cigar had a mild amount of resistance, roughly 1-1/2 to 2 notches into the resistant spectrum. For me personally, this is where I find a smaller ring gauge would be ideal.
Jiunn: The draw was noticeably tight. It didn’t hinder the flavor profile but I was reminded of it on every draw.

Aaron: The cigar began with dark wood, dark earth, black pepper and bakers chocolate. Some light creaminess joined fairly quickly and the dark wood became toasted oak a bit later. The second third saw the chocolate note depart and the final third saw a vegetal note join in as the cigar warmed up. Construction was great, aside from a slightly tight draw. The La Sirena Mexican Mermaid Lancero had a nice start, with a good balance of flavors. As the chocolate departed in the second third, the enjoyment dropped a level and maintained that level the rest of the way. The flavor profile is very wood and earth dominant, but the softer notes early on provided a nice balance that waned as the cigar went on. If they could have maintained their position in the profile throughout, it would have helped things. Pricing is a bit high and would likely keep me from returning frequently, but checking out the other vitolas is something that intrigues me.
Seth: I enjoyed the La Sirena Mexican Mermaid Lancero, and it makes me interested in the other vitola offerings. I don’t see the Lancero or Gordo really capturing the strengths of this blend, and I hope with some more Dominican tobacco presence, the blend will take off. It had some great Mexican flavors, while not overpowering me in terms of the strength, body and flavors. There was some balance to the cigar. I felt that the final third lost some of the qualities from the first and second, but the cigar still did quite well.
John: The La Sirena Mexican Mermaid Lancero showcases some of the best things from Mexican San Andres wrapper. No doubt having it as a binder has only amplified the flavor combinations here, and yet nothing seemed overpowering until the earth in the last third. I was happy to smoke the first one to review, and eager to smoke the second one to revisit. Burn was flawless on both, with some mild resistance to the draw on both. Total smoking time averaged 2 hours and 16 minutes.
Jiunn: This La Sirena Mexican Mermaid Lancero lacked depth, was hollow, and one dimensional. A cigar needs to do more (much more) than be a couple flavors in cedar and dry red pepper spice. The emptiness of flavors compounded with a tight draw was just salt to the wound. This is no doubt a pass for me.