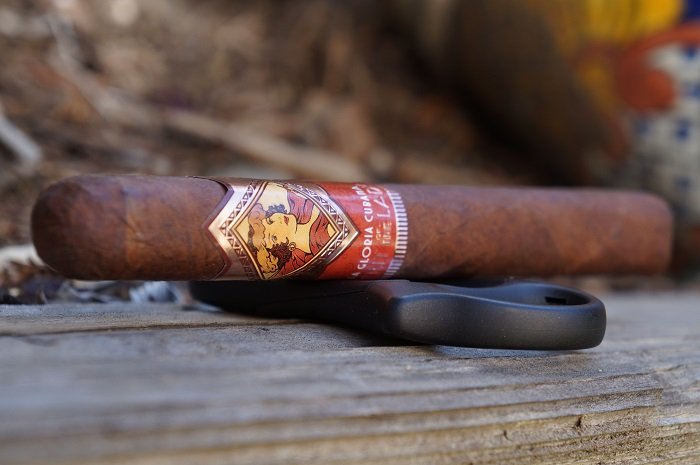 Aaron: The soft square pressed La Gloria Cubana Spirit of the Lady Toro has a marbled medium brown wrapper with a network of lightly raised veins. The seams are raised in some areas and the caps are decently applied. The band has a 50’s vibe to it with slightly faded/tarnished colors and with the font used for the brand and line names. The aroma from the wrapper is just light earth while the foot brings sweet wood. The pre-light draw brings more of the sweet wood, but there’s also the addition of some additional sweetness that tastes a bit synthetic.
Seth: Nicely pressed, and finished with a beautiful Colorado wrapper, the La Gloria Cubana Spirit of the Lady Toro is silky, veiny and toothy. There is a nice firmness present throughout, and I am picking up aromas of hay, earth and chocolate on the foot. The wrapper is giving off notes of leather and tobacco.
John: The La Gloria Cubana Spirit of the Lady Toro is cellophaned, but does not has a UPC sticker. The extended single band gives the appearance of being doubled banded. In addition, the cigar has a box pressed shape adding a pleasing complication. As I examine the cigar, it has an overall sponginess to it, and certainly seems to be underfilled. Aromas from the wrapper included barnyard, peat moss and cedar. From the foot, I could pick out sweet raisin, tobacco and hay.
Jiunn: The La Gloria Cubana Spirit of the Lady Toro has a red clay like Colorado Red wrapper shade. Veins are well pressed, seams tight, bunch and roll even and head well wrapped. Aromas from the wrapper tell mainly cedar. Aromas from the foot give cedar and hay. Cold draw provides the same cedar and hay. 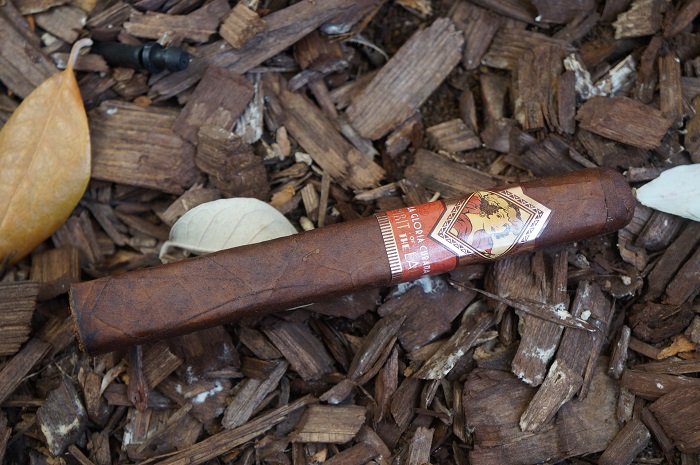 Aaron: The cigar begins with musty, dark wood and black pepper. On random draws I am getting light amounts of that synthetic sweetness. At a half inch in, the wood isn’t as dark and the mustiness has quite the start to each draw. The retrohale is musty wood and mild black pepper. As the third comes to a close, the musty wood has gained a light toast while the black pepper is dull and mellow in the background. The strength in this third was right at medium.
Seth: The first third opens with dry earth and hay notes. There is this artificial sweetness too, and I cannot decide if it helps the cigar or not. Either way, it is irritating. There are metallic spice notes present as well, and I would classify the cigar as medium in strength and body. The profile is somewhat flat, and it is missing a piece or two that would help tremendously.
John: My first puff brings an obvious artificial sweetener, along with intense baking spices and a wood finish. That artificial sweetness carries into the post draw to linger on my palate. I can’t establish where the sweetness is coming from, it definitely doesn’t present as if it’s coming from the cap. A post draw pepper moves up to full after only a few short puffs. The retrohale continues to evolve with cocoa joining, bringing with it dry wood. As the first third settles in, the post draw pepper falls to medium-plus strength, and the general profile settles into dry wood with artificial sweetener accents. Approaching the halfway point, an intense potting soil settles on the palate.
Jiunn: The first third presents red pepper spice, hay, leather and bitter over-roasted nuts. On the retrohale, it’s more red pepper and nuts without the bitter aspects. The finish has a combination of red pepper spice and leather on the rear palate. Strength and body is medium. 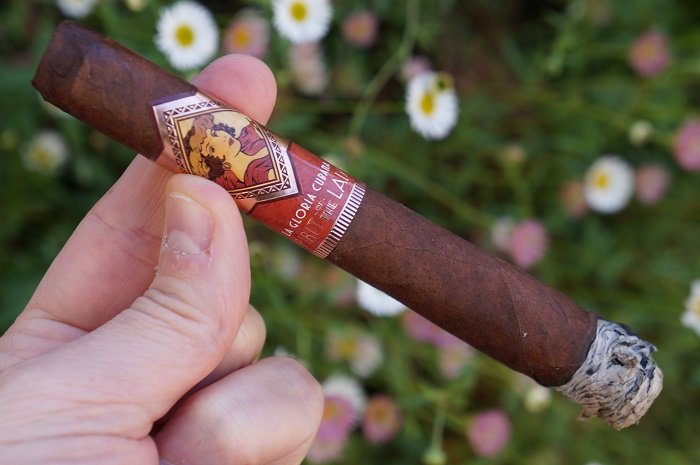 Aaron: The second third is a continuation of the first and I’m still getting some random hints of the synthetic sweetness at times. At an inch in, the black pepper has departed. The retrohale is now just musty, toasted wood. As the third wraps up, the profile is musty, toasted wood and is a bit dry. The strength remains at medium.
Seth: The second third continues to deliver those dry earth and metallic spice notes. The sweetness has faded. There are some faint cocoa powder qualities as well, and the finish is that of leather. Like before, the cigar is medium in strength and body.
John: Medium strength earth starts the second third, followed by sweet wood. The artificial sweetener returns, mixing with the wood as the second third settles in. Reaching the midway point, the flavor is earth forward, finishing wood and dry wood into the post draw. Baking spices join in the bottom half at medium strength.
Jiunn: The second third calms the spice down a little bit. This change creates a profile that is more geared towards hay, leather and bitter over-roasted nuts. The finish is also worth noting as it’s now lacking the pepper, and thus leaving me with lingering leather. Strength is increasing towards medium-full, while body remains medium. 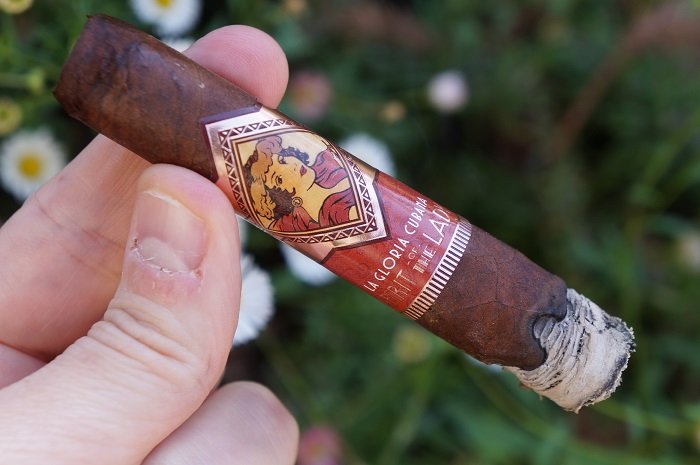 Aaron: The final third continues with the dry, musty and toasted wood with hints of the synthetic sweetness at times. At an inch in, the cigar has warmed up and a decent level of bitterness has joined in. The retrohale remains musty, toasted wood. The cigar finishes out with the musty, toasted wood and mid-level bitterness. The strength in this third bumped up to medium-full.
Seth: The final third delivers a lot of the same profiles present in the first third. I was picking up dry earth and hay notes that were paired with some metallic spice and cocoa powder qualities. Like before, the cigar is medium in strength and body.
John: Sweet wood greets me in the last third, finishing wood into the post draw. Earth moves to the front of the palate as the last third settles in. That earth is the primary flavor as the last third progresses. Before the halfway point, sweet wood moves into the center of the profile.
Jiunn: The final third has a couple changes. One, minerals join in creating a more complex profile. Second, the strength moves to a consistent medium-full (body still medium). Aside from that, I’m still getting the same hay, leather and bitter over-roasted nuts. 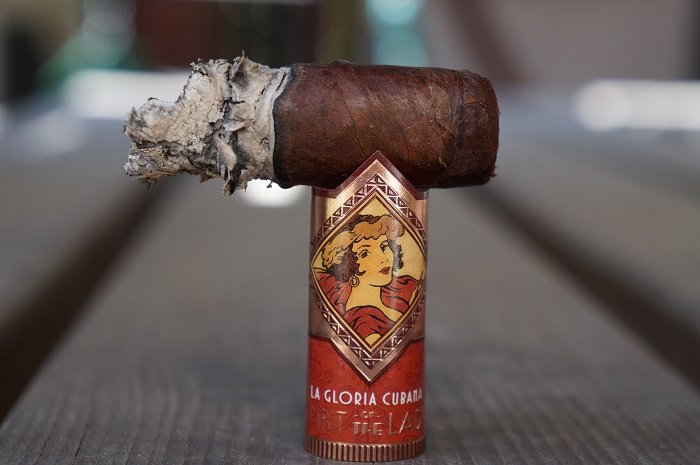 Aaron: The burn was a bit wonky throughout and just needed one touch-up to keep things in line. The ash held on in inch and a half increments.
Seth: Constant burn issues.
John: With 5 re-lights through the review, this is the worst burn I’ve experienced in my entire time with Developing Palates. Re-lights were required in the bottom half of the first third, three times in the second third and once in the last third.
Jiunn: Perfect burn. Even burn, solid ashes, good smoke production and cool burning temperature. 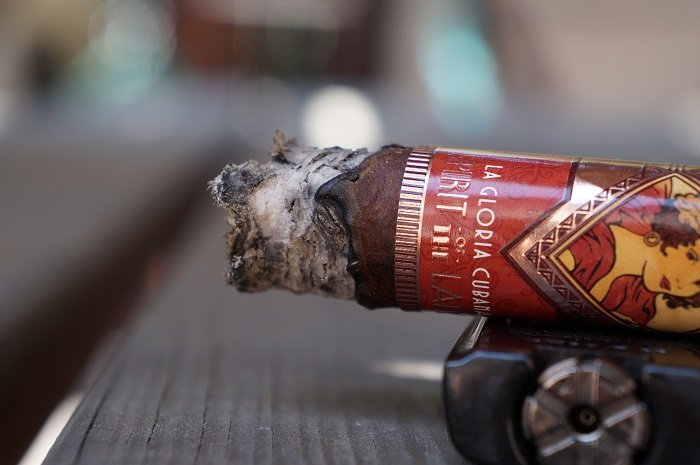 Aaron: The draw was slightly tighter than I prefer, but didn’t cause any issues with the smoking experience.
Seth: Loose draw.
John: The draw is into the open spectrum, roughly 2-1/2 to 3 notches. Based on my examination of the cigar, this is almost certainly due to underfilling.
Jiunn: Perfect draw. The ideal air flow possible.

Aaron: The flavor profile was quite average, focused around musty and toasted wood with black pepper through the first half. Things ended on a bit of a down note as a decent level of bitterness joined in. The faint synthetic sweetness that was present on random draws was a bit unexpected. There was nothing particularly engaging about the La Gloria Cubana Spirit of the Lady Toro, and with the higher price point on this, I really don’t see myself returning to it.
Seth: This was not a lady, and I found no spirit. A flat cigar from beginning to end. Bordering on subpar and average throughout, the La Gloria Cubana Spirit of the Lady Toro was missing key ingredients that would have hopefully made the cigar decent. Terrible burn and draw throughout. The problem with La Gloria Cubana is that you never know where the release is going to score. Most of the time it will be subpar, like Spirit of the Lady, but there are occasions when they release a great La Gloria Cubana like Coleccion Reserva. I would stay clear of this release and find something else to smoke.
John: A simple description of my review experience with the La Gloria Cubana Spirit of the Lady Toro is ‘hot mess’. The apocalyptically poor burn experience aside, I don’t think that artificial sweetener is something that belongs in premium cigars. If you set aside the artificial sweetness, the overall flavor profile is monotone from start to finish which became an exercise in stamina with an overall smoking time of 2 hours and 38 minutes. If it wasn’t clear from the description of the overall experience, I would have no interest in smoking this cigar again.
Jiunn: The La Gloria Cubana Spirit of the Lady Toro is a brand new portfolio spin off, the same mediocre cigar. This flavor profile is quintessential to how I feel about most cigars from General (especially blended by in house blenders); highly earthy, unbalanced and a bit spiky in nature. I know I sound like a broken record by now but I don’t care and will say it again. With all the budget that STG has, they really need to find better cigar blenders and, in turn, make some outstanding cigars. No offense to their current blending team(s), as I’m sure the marketing strength of the cigar brands are strong, but I just want better blends.