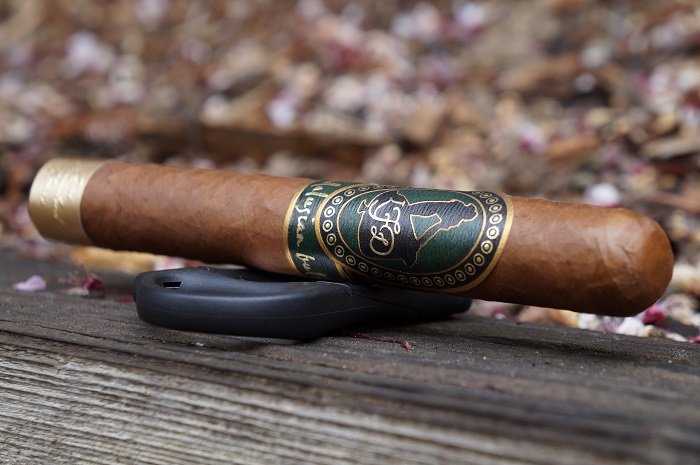 Aaron: The La Flor Dominicana Andalusian Bull Jack Schwartz Importer One Hundred Years has a wrapper that is between light and medium brown and has some knotty veins and wrinkles to it. The seams are fairly smooth and the caps decently applied. There are three bands on the cigar, with the primary and secondary carrying the same green, black and gold color combination. The primary denotes the initials of the company while the secondary denotes the line. The foot band is gold and has the words One Hundred Years embossed on it. The aroma from the wrapper is an extremely faint general wood note while the foot brings musty cedar. The pre-light draw brings a nice mix of mushroom mustiness and cedar.
Seth: Lovely in appearance, the La Flor Dominicana Andalusian Bull Jack Schwartz Importer One Hundred Years is also gigantic. It is firm throughout and sports few veins that are medium to large. There is a nice Colorado coloring present in the wrapper, and it has this reddish clay coloring. It is slightly oily as well. Aromas of hay, herbs, leather and tobacco on the foot. Wrapper is giving off similar notes.
John: The La Flor Dominicana Andalusian Bull Jack Schwartz Importer One Hundred Years does not come in cellophane and does not have a UPC sticker. The cigar has what initially appears to be one large primary band and a foot band, but on closer inspection it’s comprised of two individual bands. The primary band is the LFD band, with the secondary band indicating ‘andalusian bull’. The final band is a foot band in metallic gold indicating ‘One Hundred Years’. Aromas from the wrapper included clove, sharp wood and rooibos tea. The foot was more subtle with mild, sweet hay and a faint vanilla. 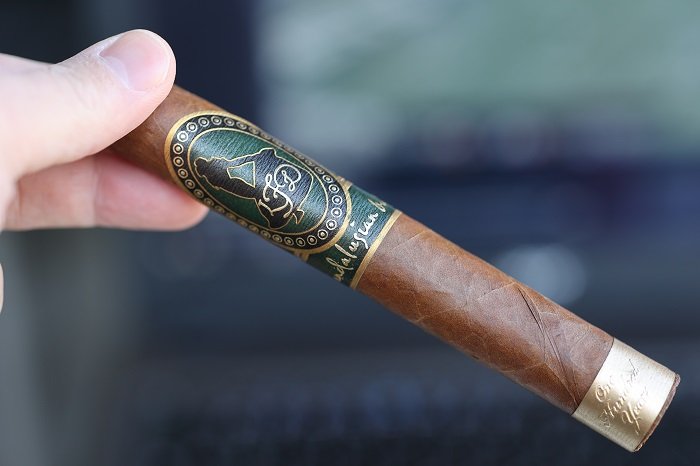 Aaron: The cigar begins with cedar and creamy but bold baking spice. At a quarter inch in, some black pepper joins in combination with the baking spice. The retrohale is musty cedar and light black pepper. At an inch in, the baking spice has departed and the profile is now musty cedar up front with black pepper and creaminess a bit behind. The third wraps up with the same musty cedar up front with black pepper and creaminess a bit behind. The strength was right at medium.
Seth: The first third opens with mineral, herbal and leather qualities. I am picking up some hay and tobacco notes as well, and the finish has some nutty and wood traits. There is a sweet cinnamon spice profile as well, and the cigar is medium in strength and body.
John: The first third opens with wood, and a mildly dry wood through the post draw. Mild creaminess is present through the retrohale. As the first third begins to settle in, a delayed light-plus strength spice joins the post draw. As the first third continues, mild earthy clove notes come through at the end of the draw. The evolution continues with a clean wood through the finish as post draw spices ramp up to medium-full intensity. Some citrus sourness activates the sides of my tongue on the post draw. By the 10 minute mark, earth is now lingering into the post draw. Approaching the halfway point, some mild mustiness at the end of the draw as the spices have receded down to light-plus strength. Light bread comes into the retrohale in the bottom half. 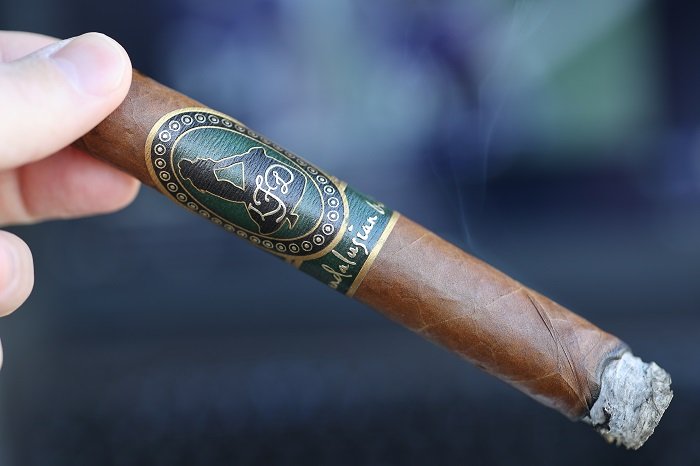 Aaron: As the second third begins, the cedar gains a light toast while the creaminess drops from the profile. At a half inch in, the black pepper has left the profile. The retrohale is now just musty, toasted cedar. As the third comes to a close, a light, dry earth joins while the musty, toasted cedar remains up front. The strength in this third bumped up to slightly above medium.
Seth: The second third shows some growth as a cigar and I am picking up a profile of leather, earth, herbs and spices. There are some wood qualities as well, and it has an aromatic finish. Medium in strength and body. Balanced and lovely third.
John: The second third gets started with bread, baking spices and a light wood to finish into the post draw. The second third remains consistent until near the halfway point, where the post draw gains earth at medium to medium-plus intensity, mixing with the wood already present. In the bottom half of the second third, earth has faded to a more manageable light-plus strength. 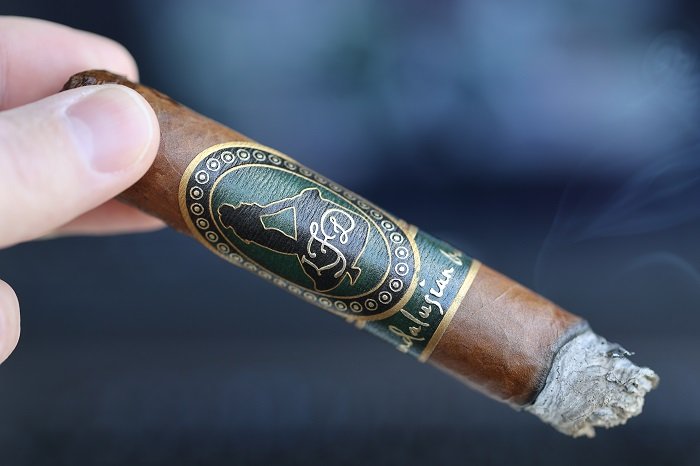 Aaron: As the final third begins, a light creaminess rejoins the profile. At a half inch in, the cigar warms up and brings a light vegetal note. The retrohale remains musty, toasted cedar. At an inch in, the warm vegetal note picks up a bit. As the cigar wraps up, the profile is musty, toasted cedar up front with the vegetal note and creaminess right behind and some dry earth in the background. The strength in this third bumped up to medium-full.
Seth: The final third continues to deliver those enjoyable qualities from the second third. I am picking up lovely dry earth notes that are paired with wood and spices. There are leather and cocoa notes present as well, and the finish is that of coffee. Medium in strength and body.
John: The last third begins with light-plus strength wood and bread, as wood lingers well into the post draw. As the final third progresses, a sweet wood takes over the center, and brings with it mild tannic accents. By the halfway point, mild baking spices come through at the end of the draw. In the bottom half, mild graham cracker and earth combine through the finish. 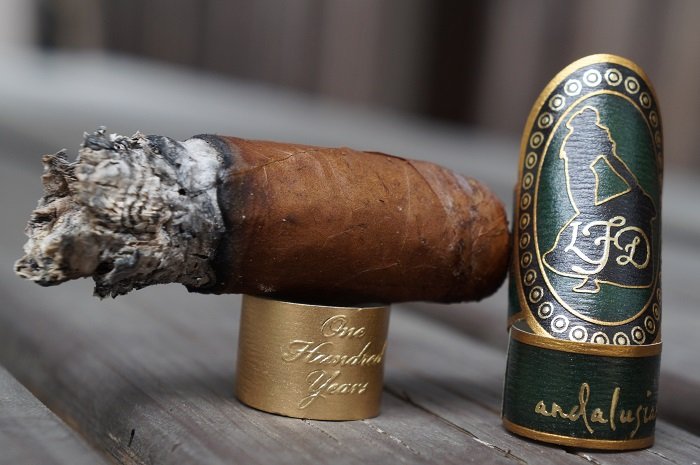 Aaron: The burn was wavy throughout and required two touch-ups to keep things burning in unison. The cigar also went out once, requiring a re-light.
Seth: Solid burn from start to finish.
John: The burn was straight through the entire review. There was a few moments in the first third where the burn felt like it was on the edge of stalling out, but it burned without issue. 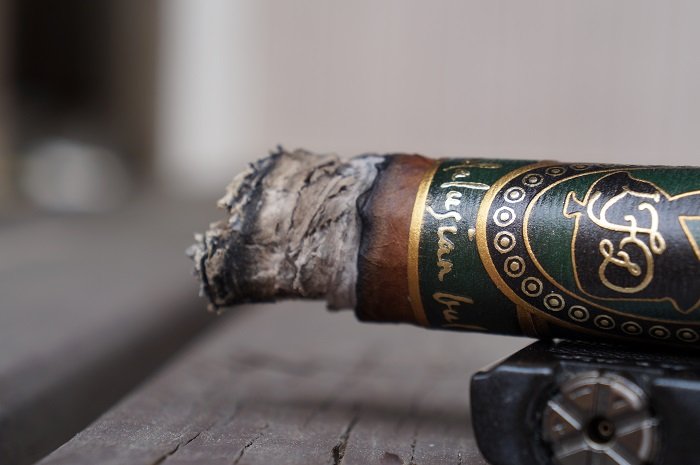 Aaron: The draw was slightly tighter than I prefer, but didn’t seem to cause any issues with the smoking experience.
Seth: Great draw throughout.
John: The draw was at most one notch into the resistant spectrum which puts it in the range for an ideal draw.

Aaron: The cigar began with cedar and creamy but bold baking spice. Some black pepper joined in fairly quickly and the baking spice departed a bit later. Some mustiness joined in towards the end of the third. The second third saw a toast note join the cedar, some dry earth joins in and the black pepper departs. The final third saw some creaminess rejoin and a vegetal note appear. The burn seemed a bit of an issue as I didn’t get normal smoke production and had to take multiple draws a majority of the time. The La Flor Dominicana Andalusian Bull Jack Schwartz Importer One Hundred Years also had some sneaky strength as it went along. Overall, the cigar was pretty boring as the flavor profile wasn’t enticing, the burn issues were a bit frustrating and the strength level was a bit too much. I’m sure there are those that would find the profile and strength interesting, but it’s just not for me.
Seth: The Andalusian Bull has never been a cigar that has spoken to me, but I do prefer this La Flor Dominicana Andalusian Bull Jack Schwartz Importer One Hundred Years to the national release. The leather, earth, herb and spice notes were enjoyable, and the cigar really grew as it progressed. The second and final third both did well. The burn and draw were solid, and that is not something I typically comes across with La Flor releases.
John: The La Flor Dominicana Andalusian Bull Jack Schwartz Importer One Hundred Years surprised me in many ways, not the least of which how it brought many different layers of nuance despite being a larger ring gauge format. The first and second thirds were balanced, engaging and at times intense without blowing out my palate or generating palate fatigue later on. The last third was quite pleasant and just missed the good scoring mark level. The draw and burn were both perfect. The Andalusian Bull Jack Schwartz Importer One Hundred Years certainly delivers in the premium flavor category and I believe I prefer it over the original Andalusian Bull release. Total smoking time was excellent at 2 hours and 48 minutes.