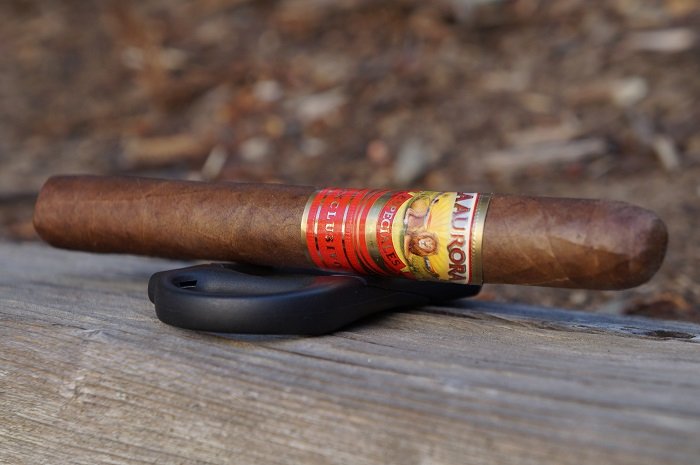 Aaron: The wrapper on the La Aurora Especiales Corona Gorda is near medium brown and has a network of lightly raised veins present. The seams are slightly raised while the caps are very well applied. The band is red and gold and has the traditional Lion design while denoting the line name and Exclusivo. The aroma from the wrapper is a mix of cedar and earth while the foot brings a cinnamon roll like sweet breadiness and light wood. The pre-light draw brings spicy cedar with a light raisin sweetness and some spiciness on my lips and tongue.
Seth: I absolutely love La Aurora bands. So many wonderful memories over so many years. Beautiful cigar overall. Wrapper has a great dark Natural coloring, and it has this coffee with a splash of milk vibe. Silky in texture and firm throughout. Small veins that are barely noticable throughout the La Aurora Especiales Corona Gorda. Aromas of chocolate, pipe tobacco, cherries, rich earth, Asian spices and leather.
John: The La Aurora Especiales Corona Gorda comes in cellophane with a UPC sticker that tears in half when the cellophane is opened. During my initial inspection, it seemed the large single band might actually be comprised of two bands, but that was not the case. For aromas, I could smell bread, wood and a sweet honeysuckle vegetal note, along with trailing barnyard. From the foot, there was hay and sweet tobacco.
Jiunn: The La Aurora Especiales Corona Gorda has a uniform Colorado wrapper shade. Veins are well pressed, seams tight, bunch and roll even and head well finished off. Aromas from the wrapper tell barnyard and naturally sweet and creamy toasted nuts. Aromas from the foot adds in some nice dry red pepper spice. Cold draw tells cedar shavings and sweet cream. 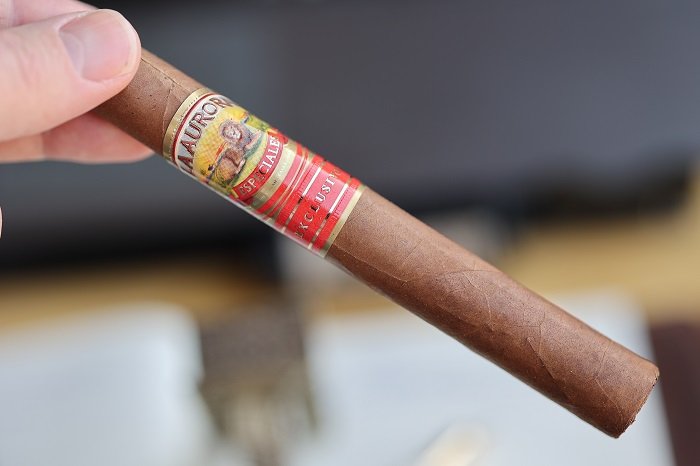 Aaron: The cigar begins with toasted cedar and bold baking spice. At a half inch in, the baking spice transitions to black pepper but maintains the boldness. At an inch in, the black pepper mellows a bit. The retrohale is toasted cedar and mid-level black pepper. As the third comes to a close, the profile remains toasted cedar up front with black pepper right behind. The strength was slightly above medium.
Seth: The first third starts out with a nice Chinese spice profile that is paired with some almond creaminess. I am picking up faint bread notes, and there are some currants and leather on the finish. Strength and body are around the medium level.
John: The first third opened with sweet, green wood and a dry tannic wood to finish. Creamy vegetal notes combine with medium strength baking spices and wood through the retrohale. A bread sweetness joined a few puffs in. As the first third progresses, chocolate merges with the bread. Some time later, lingering medium strength spices are present on the post draw between each puff.
Jiunn: The first third presents a good spicy and sweet mixture showing deep notes of sweet dried nuts, cream, cedar and dry red pepper spice. There’s also some burning construction paper type notes as well. Not my favorite note, but it doesn’t take over the good notes. Retrohaling gives a deep but nice red pepper spice, as well as more cedar. The finish has the burning paper note show up the most. Strength is medium-full, and body is medium. 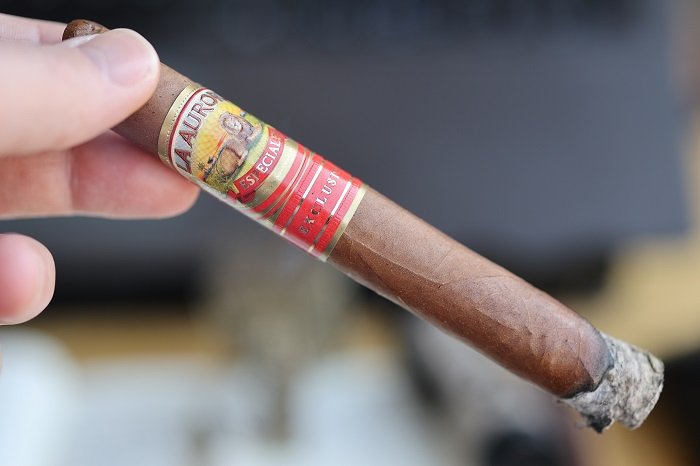 Aaron: As the second third begins, some dry earth and light mustiness joins the profile. At three quarters of an inch in, the pepper mellows a fair amount. The retrohale is now musty, toasted cedar with dry earth and black pepper a bit behind. At an inch and a quarter, a light wood bitterness joins the profile. As the third comes to a close, the profile is musty, toasted cedar up front with dry earth and black pepper a bit behind and light wood bitterness in the background. The strength remains at slightly above medium.
Seth: The second third delivers a flavor profile of soft Chinese spices with bits of red and black pepper. There are leather and cream notes, and I am picking up some cedar, nut and coffee notes on the finish. Medium in strength and body.
John: The second third was out of the gate with medium-plus strength baking spices, bread under that and wood to finish the draw. As the second third progresses, the wood surprisingly becomes the primary flavor driver. Approaching the halfway mark, tannic wood takes up home in the middle of the profile.
Jiunn: The second third picks up a good amount of minerality. Further, the burning construction paper note ramps up as well. These two flavors don’t gel well with the good flavors of sweet dried nuts, cream and cedar. Strength and body remains medium-full and medium, respectively. 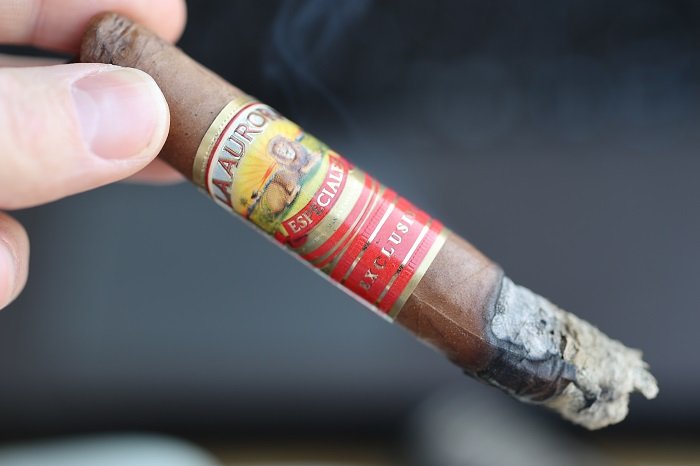 Aaron: As the final third begins, the pepper is now pretty mild and the toast level increases. At a half inch in, a vegetal note joins the profile. The retrohale remains musty, toasted cedar with dry earth and black pepper a bit behind. At an inch and a quarter, the cigar warms up and the vegetal note ramps up. As the cigar wraps up, the musty, toasted cedar remains up front with the vegetal note right behind, some dry earth a bit further behind and pepper and wood bitterness in the background. The strength remained at slightly above medium.
Seth: The final third has a lovely finish that is giving off Chinese spice notes, bits of leather, nut qualities, currants, tobacco, cedar and cream. Like before, medium in strength and body. Smooth finish.
John: Baking spices combine with bread into the last third. A dry tannic cedar finishes the draw and lingers into the post draw. As the last third settles, each puff is dry wood forward. By the halfway mark, earth joins the post draw.
Jiunn: The final third is unchanged from the second third. The main headline is still minerals, burning construction paper, dried nuts, cream and cedar. The minerals and paper note is heavy handed. Strength and body is unchanged at medium-full and medium. 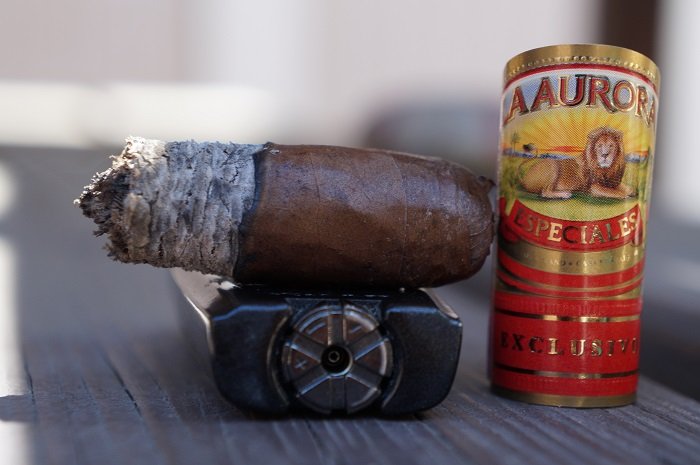 Aaron: The burn line was straight throughout, but the cigar did go out once in the first third, requiring a re-light.
Seth: Very nice burn throughout.
John: La Aurora knows how to consistently manufacture cigars well, and the Especiales Corona Gorda is no different with a straight burn through the review, and a minor, self correcting offset in the second third. The ash held on in 1+ inch increments that I would tap off before it fell into my lap.
Jiunn: Perfect burn. Even burn, tight ashes, cool burning temperature and good smoke production. 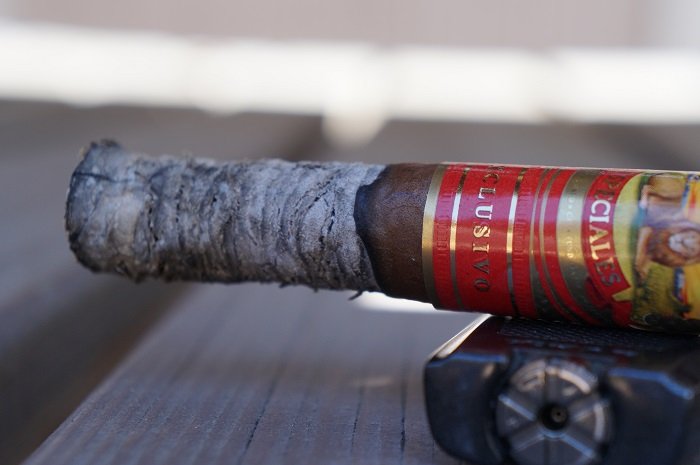 Aaron: The draw was slightly tighter than I prefer, but didn’t cause any issues with the smoking experience.
Seth: Perfect draw.
John: As per above, the draw is perfectly in the zone between open and resistant.
Jiunn: Slightly tight, but it’s by no means a deal killer.

Aaron: The cigar began with toasted cedar and bold baking spice. The baking spice transitioned to black pepper fairly quickly. The second third saw some dry earth and mustiness join in as well as some wood bitterness. The final third saw a vegetal note join in and build up. The La Aurora Especiales Corona Gorda started with an average, basic profile and then added some components as it went on, but never grabbed my attention. It finished on a down note with the vegetal note really building up. The pre-light had me really intrigued for the cigar, but as we know, this rarely translates into the components of the flavor profile. Maybe another vitola will hit for me, but for now, I’ll pass on this one.
Seth: I am not saying the La Aurora Especiales is very strong, and I am not saying this cigar is in the “same conference” as the two cigars I am about to name. But, I felt that the La Aurora Especiales Corona Gorda was the Dominican counterpart to the Nicaraguan releases of RoMa Craft Baka and BLK WKS Hyena. I felt this was a more modern Cameroon release from La Aurora and the Dominican Republic. Yes, it is using an Ecuadorian Cameroon wrapper and not an authentic African Cameroon, but the cigar has more strength, body and darker flavors than a lot of past Cameroon releases from the company. It has that Dark Sumatra vibe that AJ is using. I thought the strength and body were enough to make it approachable to all smokers, just depends on when you want to smoke it, and the flavors were complex and dark with some lighter aspects as well. The almond, cream, currant and Chinese spice notes were great together.
John: The La Aurora Especiales Corona Gorda started out well, with an engaging and complex medley of flavors. That continued for a time into the second third, but abruptly became wood driven as the complexity fell off. The last third tried to get going with spices and bread but settled back into a mostly wood profile. Overall, a pleasant experience but just missed the good mark for me. Construction and draw were both flawless. Total smoking time was 2 hours and 7 minutes.
Jiunn: I’ve said this before and I’ll say it again, La Aurora’s best offerings are within their budget price range offerings. The La Aurora Especiales Corona Gorda had some nice moments of greatness, but it no doubt falls short for the majority of the smoking experience. Give it a couple to try first.