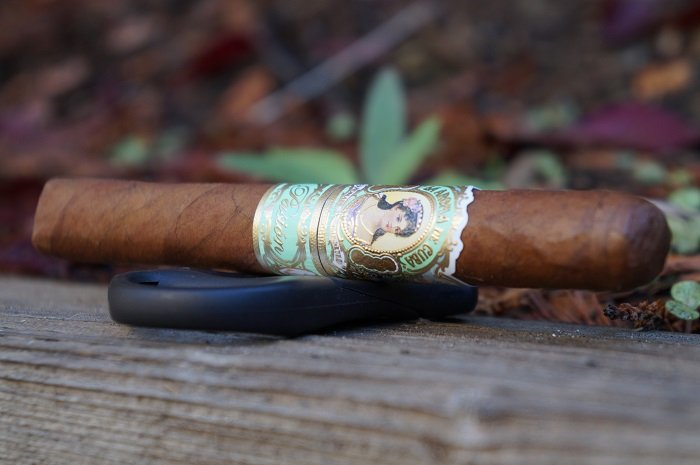 Aaron: The wrapper on the La Aroma de Cuba Pasion Corona Gorda is medium brown with a hint of red and there are a couple of lightly raised veins along with a fine toothiness. The seams are smooth and the caps applied well. There are two bands, with the primary being the traditional design for the brand but having a pastel green color to it. The secondary band carries the same color combination and denotes the line. The aroma from the wrapper is musty wood and light earth while the foot brings more musty wood along with some tobacco sweetness. The pre-light draw brings sweet and musty aged cedar along with a mild spiciness on my lips.
Seth: Beautiful Colorado Maduro wrapper, the wrapper sports a plethora of veins that are small, medium and large in size. The La Aroma de Cuba Pasion Corona Gorda is firm throughout, and finished with a great cap. The cigar gives off an aroma of leather, rich earth, sweet spices and tobacco on the foot and wrapper.
John: The La Aroma de Cuba Pasion Corona Gorda comes in cellophane, with a UPC sticker that tears in half when the cellophane is opened. The cigar is double banded with the secondary band indicating ‘Pasion’. For aromas, I was picking up on bread, wood, faint fruit sweetness and some mustiness. From the foot, the only thing distinct for me was sweet wood.
Jiunn: The La Aroma de Cuba Pasion Corona Gorda has an even Colorado Maduro wrapper shade. Veins are well pressed, seams tight, bunch and roll even but with a bit too much give on the foot and head well wrapped. Aromas from the wrapper tell pungent barnyard and cedar. Aromas from the foot give rich black pepper and nuts alike. Cold draw tell cedar shavings and hay. 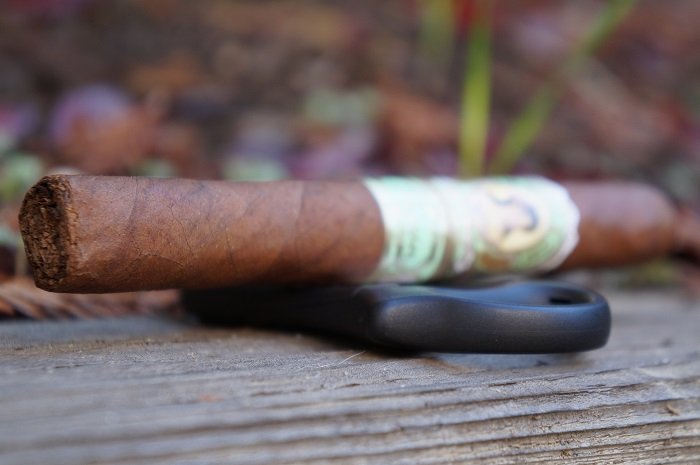 Aaron: The cigar begins with a full combination of musty wood and baking spice. At a third of an inch in, the baking spice transitions to a bold black pepper as the wood gains a toast note. At three quarters of an inch in, the black pepper mellows a bit. The retrohale is musty, toasted cedar with a trailing black pepper zing. At an inch and a quarter, the wood is now more defined as cedar and the mustiness has a bit of creaminess paired up with it. As the third comes to a close, the profile is musty, slightly creamy toasted cedar with black pepper a bit behind. The strength is slightly above medium.
Seth: The first third starts out with some leather, damp wood and peppery spice flavors. There are some dry earth and mineral qualities as well, and the finish has a meaty profile. Medium in strength and body.
John: My first few puffs were focused on flavors of wood, with some heavy tannic wood carrying the profile into the post draw. Some sweet baking spices began to develop through the retrohale. Not long after, earth joins the finish. As the first third progressed, chocolate pushed into the middle of the profile. Chocolate moves to the front of the profile by the halfway mark.
Jiunn: The first third is pretty easy going. Lots of white notes (bread, nuts, cedar), with some tapered minerals. Retrohaling gives intensified minerals and actual spice shows up (black pepper). The finish is slightly gritty and earthy. Strength and body is medium. 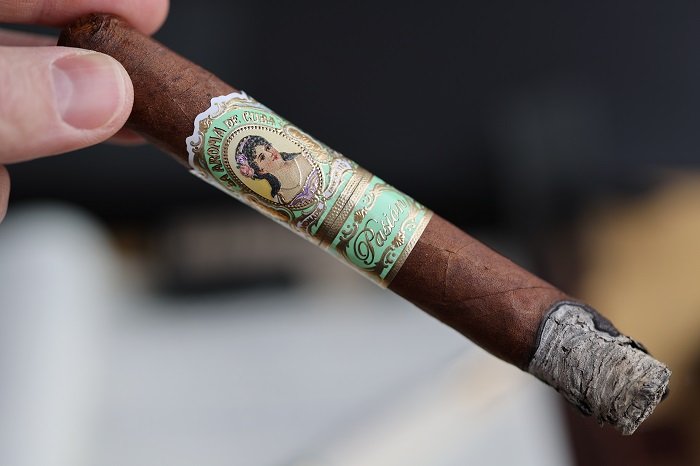 Aaron: As the second third begins, the cedar has transitioned to oak. At a half inch in, the black pepper is now even with the musty, slightly creamy toasted oak. The retrohale is now musty, toasted oak with mild black pepper. At an inch and a quarter, the toast level becomes pretty heavy and the creaminess is no longer present. As the third comes to a close, the black pepper is now a bit behind the musty, heavily toasted oak. The strength has bumped up to medium-full.
Seth: The second third delivers a flavor profile that is creamy with red pepper notes. There are some leather, herbal and meaty qualities as well, and the finish has this mineral and earth vibe. Medium in strength and body.
John: The second third started with chocolate, mild baking spices and a wood finish unchanged from the first third. Heavy tannins have largely fallen off by this point. As the second third settles, mild earth moves into the middle of the profile. It continues to evolve, joining the post draw, bringing some minerality and mild chalkiness. Approaching the halfway mark, earth moves up to medium, almost medium-full strength, as it moves to drive the profile. Light citrus joins the medley in the bottom half as the earth falls back in intensity to medium.
Jiunn: The second third picks up a stale cedar note, as well as minerals on the back of the throat (but not irritating). Still plenty of white notes though, with the same bread, nuts and cedar. Strength and body remains medium. 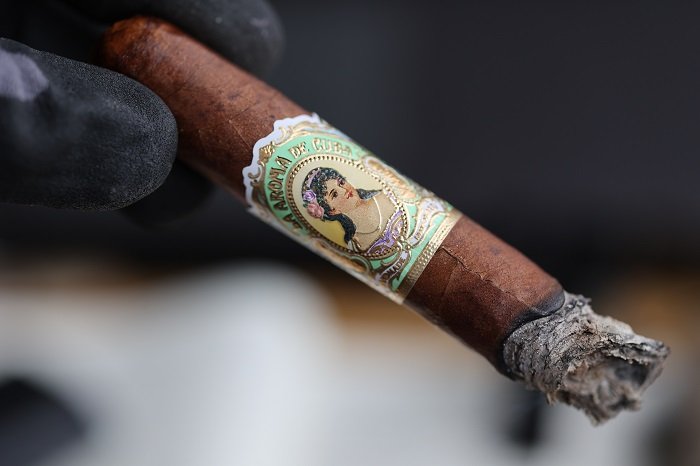 Aaron: As the final third begins, the toast has transitioned to char, bringing a slight bitterness to the profile. The retrohale is musty, heavily toasted oak and light black pepper. At an inch in, the char and bitterness both pick up a bit as a light vegetal note now joins in. The cigar wraps up with musty, charred oak and black pepper a bit behind with bitterness and a vegetal note in the background. The strength remained at medium-full.
Seth: The final third shows some transitioning, and while I am getting those cream qualities, they are not leading the cigar. Dry earth, leather and meat qualities up front with touches of cream and pepper. Herbal qualities as well. Medium in strength and body.
John: Creamy earth going into the last third, with a combination of wood and earth to finish. The minerality from the second third is still present on the post draw. As the last third settles in, chalkiness moves into the middle of the profile. By the halfway point, wood is finishing the draw with mild tannins carrying into the post draw.
Jiunn: The final third becomes more mineral and stale cedar driven, effectively cancelling the white notes. Not good. Strength and body finishes the same medium. 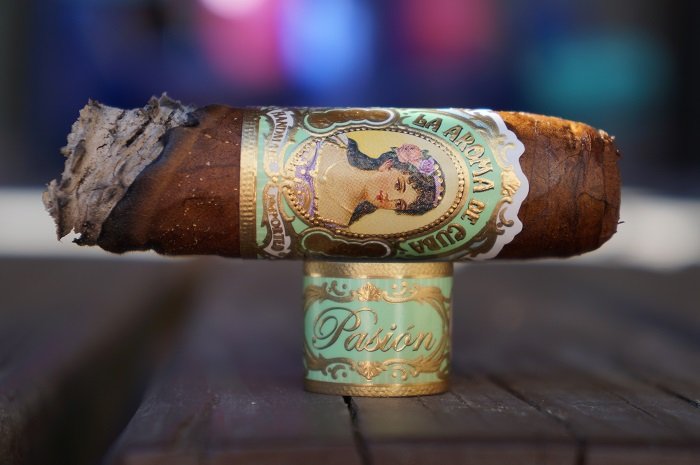 Aaron: The burn was a bit wavy at times and the cigar went out once, requiring a re-light. The ash held on in inch and a quarter increments.
Seth: Great burn throughout.
John: The burn had some issues as the burn line started out uneven. A canoe formed in the first third which required a touch-up. A canoe formed again in the second third requiring another touch-up. The cigar struggled to stay lit in the second third, eventually going out and requiring a re-light. The cigar had another canoe in the last third which self corrected.
Jiunn: No issues with burn performance. Even burn, solid smoke production, tight ashes and cool burning temperature. 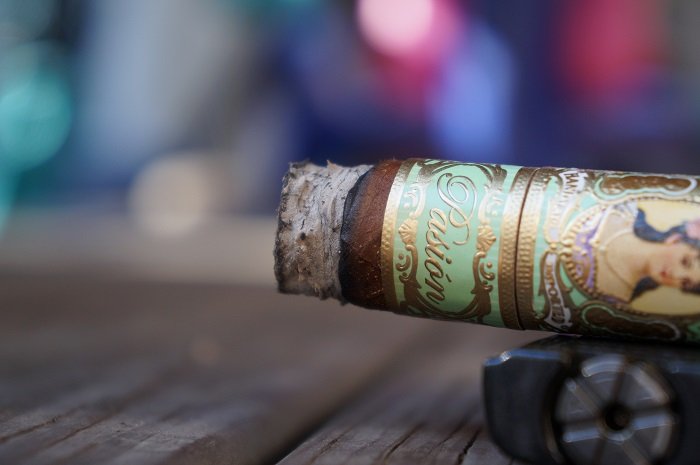 Aaron: The draw was slightly tighter than I prefer, but didn’t cause any issues with the smoking experience.
Seth: Perfect draw from start to finish.
John: The draw had some resistance to it, roughly 2-1/2 to 3 notches into the resistant spectrum.
Jiunn: The draw was two notches tighter than perfection (hence the “good” rating).

Aaron: The cigar began with musty wood and baking spice, quickly transitioning to black pepper. The wood became more defined as cedar and gained a toast note. The second third saw the cedar transition to oak. The final third saw the toast transition to char with some bitterness and a vegetal note joining in. The La Aroma de Cuba Pasion Corona Gorda started well, but began degrading in the second third as the toast became heavy and degraded even further in the final third with the char and bitterness. Definitely a good amount of strength to the cigar, but the flavor profile just waned as the cigar went along. I was pretty excited for this cigar when it was announced, but based on my experience, wouldn’t be a cigar I return to in the La Aroma de Cuba portfolio.
Seth: I can’t remember the last La Aroma de Cuba that I enjoyed this much. What a great Nicaraguan puro. Balanced blend with enjoyable flavors from start to finish. Great construction as well. My Father has released two Nicaraguan puros recently that have caught my attention. I like what I am seeing. I want more! I will definitely be coming back to this La Aroma de Cuba Pasion Corona Gorda.
John: The La Aroma de Cuba Pasion Corona Gorda had the most engaging and interesting flavors in the first third. The second third was still quite pleasant but lacked the complexity delivery. The last third was unbalanced at times. The draw had some resistance to it, and the burn struggled, requiring two touch-ups and a re-light. I’d be interested in trying the Pasion in another vitola to see how it impacted the flavor delivery. Total smoking time was 1 hour and 49 minutes.
Jiunn: Well, at least it wasn’t a $30 My Father cigar (cough cough). The La Aroma de Cuba Pasion Corona Gorda was overall decent. The cigar captured my attention for the first third with plenty of soft notes of bread, nuts and cedar, and soon lost my attention with overt minerals and staleness. It’s worth a try though, because La Aroma de Cuba new releases come around once in a blue moon.