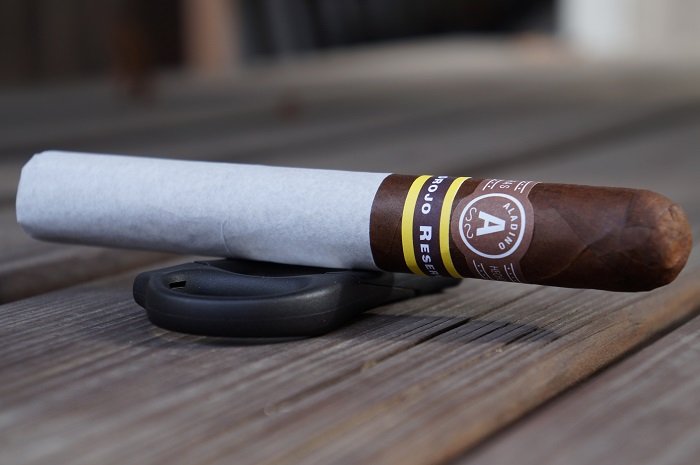 The JRE Aladino Corojo Reserva Toro has two bands, with the primary being the traditional Aladino design with a matte brown and white color combination. The secondary strip band has a darker brown with white lettering and yellow borders and denotes the line. Just under the secondary band is a tissue sleeve that runs to the foot and is twisted off there. One the tissue sleeve is slid off, a medium brown wrapper with some darker marbling is presented. There are a couple of slightly raised veins and the seams are visible in some areas due to some slight lifting. The head is finished off with a triple cap that has a raised wrinkle on one side of the second cap. The aroma from the wrapper is a mix of cedar and leather while the foot brings cherry sweetness, cedar and leather. The pre-light draw brings a light, airy cedar along with a faint dustiness. There is also a mild spiciness on my lips. 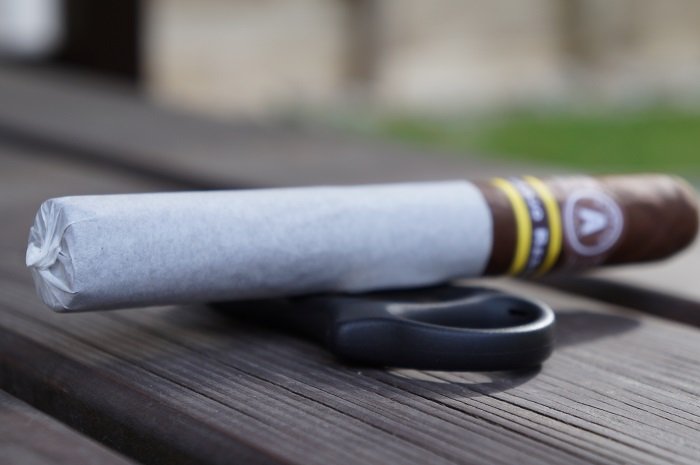 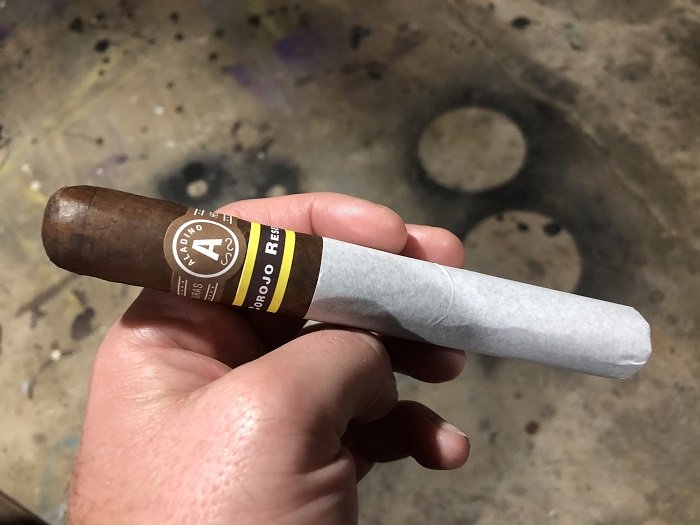 The JRE Aladino Corojo Reserva Toro is massive in hand and sports a solid and consistent Colorado Maduro wrapper. There are few veins present throughout and those present are small in size. The wrapper is smooth and dry in texture and showing aromas of dried currants, tobacco, leather, spices and dark cocoa powder.

The cigar begins with a combination of cedar and baking spice. At a quarter inch in, the cedar is showing some really nice depth. At a half inch in, some mustiness joins the profile. At an inch in, the cedar has a slight lead over the baking spice and mustiness. The retrohale brings musty cedar. At an inch and a quarter, a light creaminess joins the profile. As the third comes to a close, the cedar and baking spice are even up front while the mustiness is right behind and the cream is a bit further in the background. The strength in this third was slightly below medium. 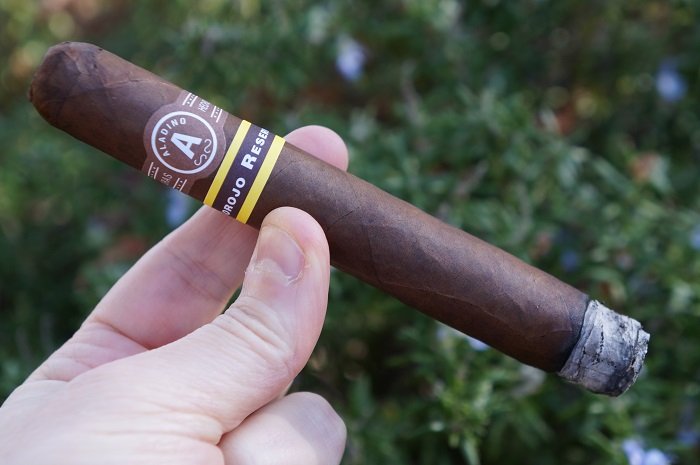 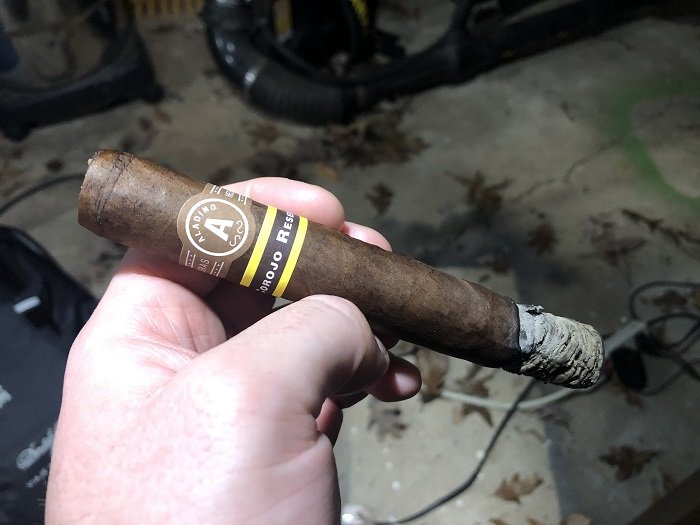 The first third opens up by delivering some soft cream notes that are paired with a dry and mineral like earth quality. I am getting some tobacco notes with that and the finish is of soft pepper and spices. I am picking up some coffee and leather notes as well, and there is a slight lemon and orange citrus quality on the finish. I would classify the cigar as being medium-full, and that is for strength, body and flavors. 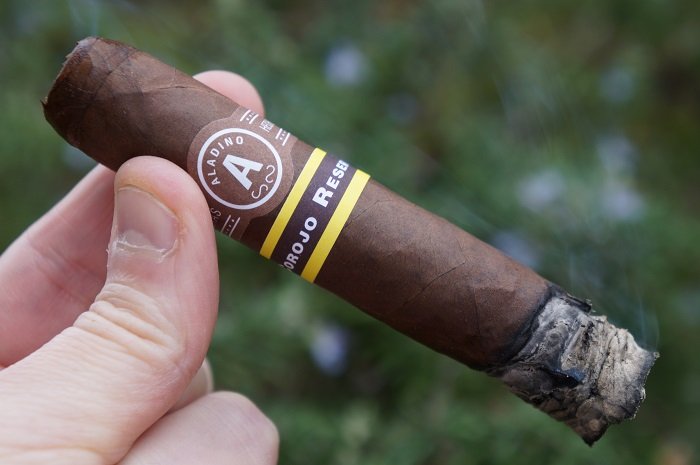 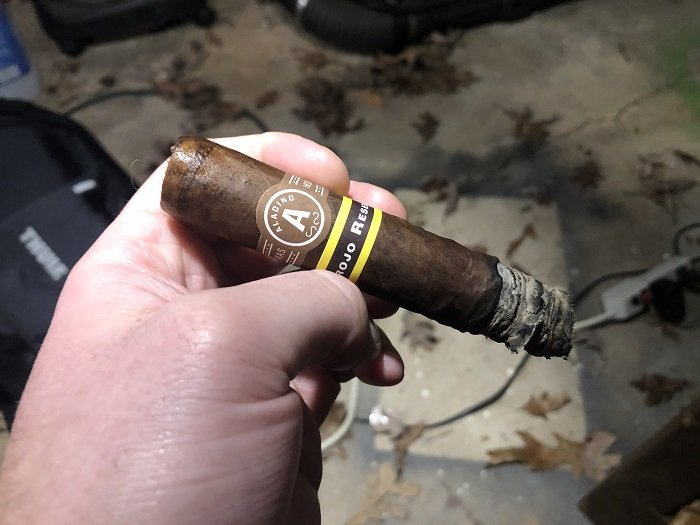 I am in the second third of the cigar now and I am seeing a continuation of those soft cream notes. There is a woody cedar profile present with that and I am picking up that peppery spice profile as well. Floral notes have begun to emerge and they are pairing with the earth and mineral qualities from before along with some hay like qualities. Great transitioning with a nice complexity. Like before, the cigar is medium-full in strength, body and flavors.

The final third continues on with just the musty cedar profile. At a half inch in, the mustiness now has the lead over the cedar. At three quarters of an inch in, some dry earth joins the profile. The retrohale is a mirror image as it’s musty cedar and dry earth. At an inch in, an herbal note joins the profile. The cigar wraps up with the mustiness slightly ahead of the cedar. The dry earth and herbal note were a bit further behind in the background. The strength in this third bumped up to slightly above medium. 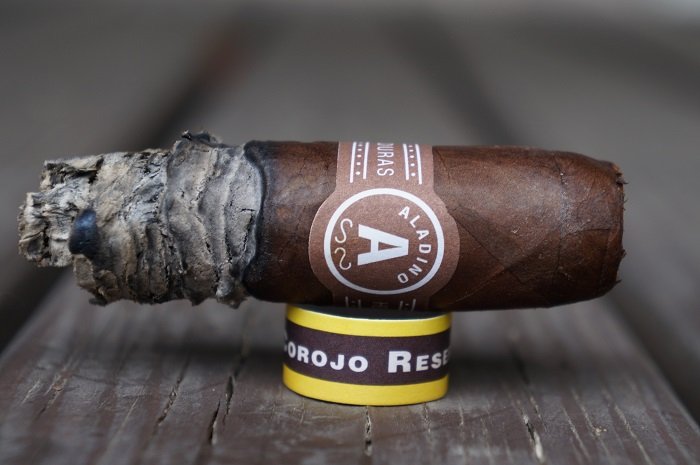 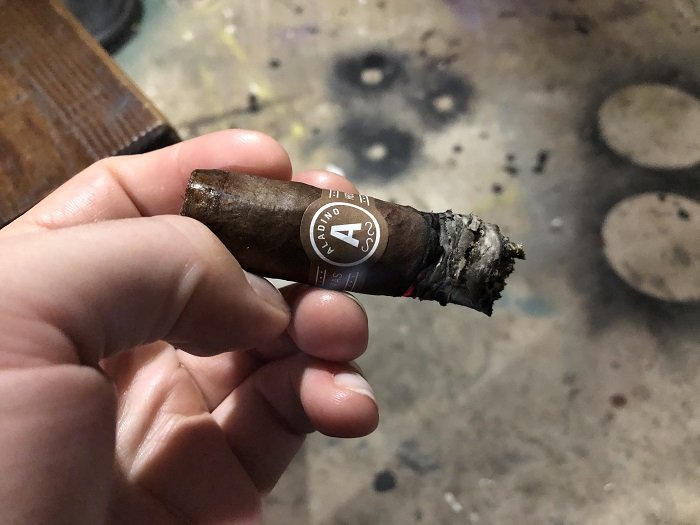 I am in the final third now and once again the cigar is showing transitioning between thirds while maintaining that complexity and depth. Notes of cookies and cream have emerged on the finish and with that is some coffee and dry earth flavors. The orange lemon citrus flavors have returned and the finish is of mineral and peppery spice notes. The cigar is still smoking at that medium-full level in all areas and it is a great finish.

The burn was slightly wavy throughout. The cigar went out on me three times, once in each third and required re-lights. The ash held on in inch and a quarter increments. 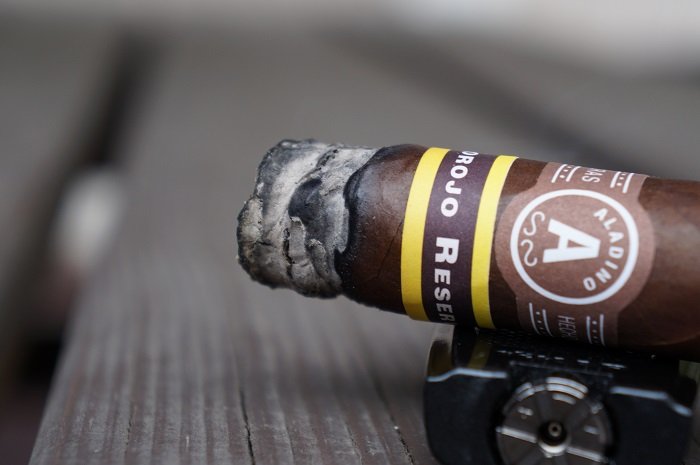 From start to finish, the cigar delivered a great burn line that was consistent. Maybe once or twice it was slightly wavy, but it never presented any problems for the cigar. It smoked well throughout with dark charcoal ash.

The cigar began with cedar and baking spice and saw some mustiness join in fairly quickly. A bit of cream also joined. Toward the end of the second third, the baking spice and cream left and the final third saw the addition of dry earth and an herbal note. The burn was an issue with multiple re-lights and strength built from slightly below medium to slightly above. The JRE Aladino Corojo Reserva Toro had a nice start, but once the supporting notes of baking spice and cream started dropping, the cigar became fairly average. I know a lot of people like this line, but for me, it’s not a special cigar past the first third. The price is fairly high as well, and I’d probably go with the regular Aladino line over this one. If you’re a fan of the Aladino line, it’s definitely worth checking this out to see how it ranks for you.

Draw was fantastic and offered just the right level of resistance from beginning to end with a cool finish.

I have always stated that when someone makes a great Honduran puro it is hard to beat, and I stick by that. The JRE Aladino Corojo Reserva Toro is simply fantastic and a great addition to the Corojo Reserva line. It offers those great flavors from the Robusto in a larger format and a format that really speaks to the American market. The cigar has complexity and depth from start to finish and the transitioning is great. The overall finish/final third makes the cigar even more appealing and makes the smoker want to light up another. The creamy, earthy and peppery spice notes are fantastic and with the coffee and citrus notes here and there it takes the blend to another level. On top of that, great construction. This cigar is hard to beat!