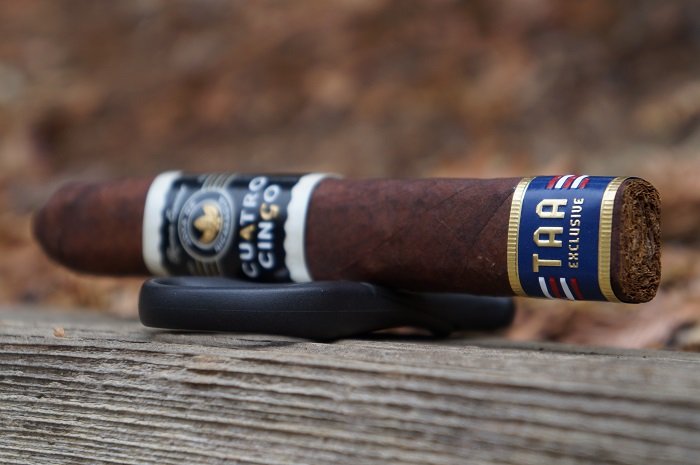 Aaron: The wrapper on the Joya de Nicaragua Cuatro Cinco Edicion Americana TAA Exclusive is medium brown with a bit of red and a network of lightly raised veins present. The seams are smooth and the Belicoso head is well finished. There are two bands, with the primary being the traditional design for the line. The foot band is blue, gold, white and red and denotes TAA Exclusive. The aroma from the wrapper is a mix of wood and sweet tobacco. The foot brings a lot of sweet raisin and some baking spice. The pre-light draw brings stone fruit sweetness and lightly spicy cedar.
Seth: The only issue I have with the Joya de Nicaragua Cuatro Cinco Edicion Americana TAA Exclusive in terms of presentation are the different colored bands. Other than that, the cigar is finished with a nice marbled wrapper that is dark Colorado to Maduro in coloring. Smooth in texture with few veins, the cigar produces an aroma of tobacco, charred meats, toasted wood, sweet earth and dark currant notes.
John: The Joya de Nicaragua Cuatro Cinco Edicion Americana TAA Exclusive is cellophaned, and has a UPC sticker with an integrated tear point. Additionally, the cigar has artisanal complications of being a belicoso format, as well as being box pressed. The cigar is technically triple banded, with the third band as a foot band indicating ‘TAA Exclusive’. The secondary band comes in the form of a band underneath the primary black ‘Cuatro Cinco’ band. For aromas, there was a bourbon barrel sweetness, wood and mild hay from the wrapper. From the foot, a more intense bourbon barrel sweetness, raisin and tobacco.
Jiunn: The Joya de Nicaragua Cuatro Cinco Edicion Americana TAA Exclusive has an even Colorado Maduro wrapper shade. High quality wrapper as it gives a nice oily sheen and shows fine traces of tooth. Veins are well pressed, seams tight, bunch and roll even and head well wrapped. Aromas from the wrapper tell of muted cedar and black herbal tea. Aromas from the foot give cedar shavings and umami. 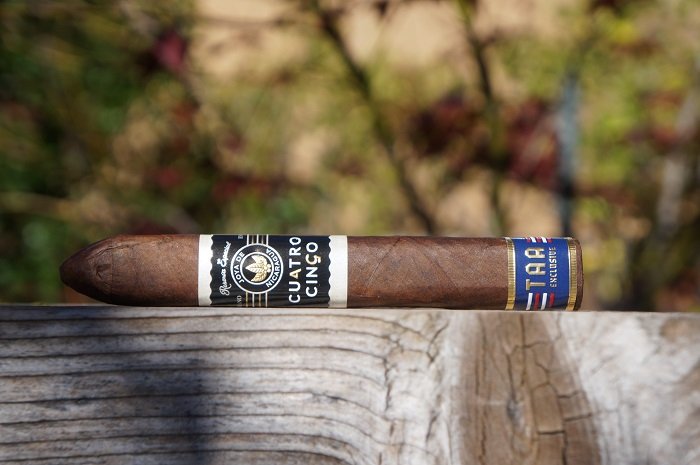 Aaron: The cigar begins with dark wood, baking spice and light mustiness. At a half inch in, the dark wood, baking spice and mustiness are all even. The retrohale brings an identical profile as the mouth draws. At an inch in, the baking spice has morphed into black pepper. As the third comes to a close, the dark wood and black pepper are even up front with the mustiness a bit behind. The strength in this third was slightly above medium.
Seth: The first third opens with strong tobacco and pepper spice flavors. There are meat, leather, salted wood and coffee notes present as well, and there is a long finish that has this herbal and earth quality. Full in strength and body.
John: The first third kicks things off with sweet bread, wood,and it gives way to medium strength baking spices. Baking spices, creaminess and powdered cocoa linger at the end of the draw and into the post draw. The baking spices move up in strength as the cigar progresses, hitting medium-full. Some light-plus strength wood joins the post draw as it settles. Some mild tannins join the post draw as it progresses. Syrupy sweetness moves into the middle of the profile.
Jiunn: The first third shows good balance. Red pepper spice, cedar and nuts all weave through in a harmonious manner. Retrohaling unlocks the profile that much more by giving added red pepper spice, nuts and cherries. The finish is short and slightly mundane with soft cedar. Strength and body is medium. 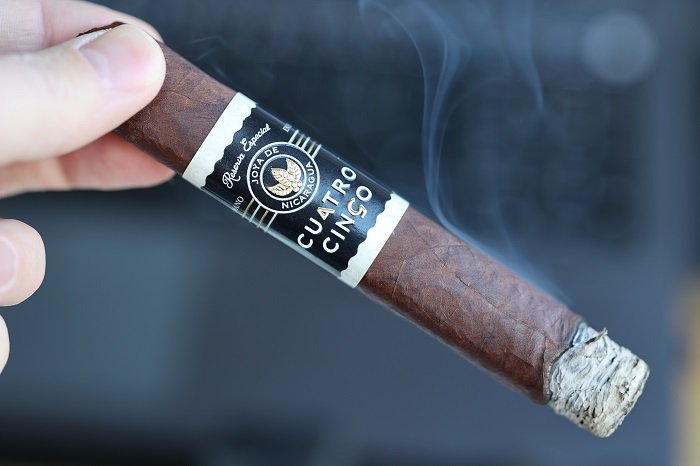 Aaron: As the second third begins, some earth joins the profile as does a light creaminess. At a half inch in, the dark wood, black pepper, earth and mustiness are all even with the creaminess in the background. The retrohale is now just musty, dark wood. At an inch and a quarter, the creaminess has departed. As the third comes to a close, the dark wood, black pepper, earth and mustiness remain even. The strength in this third remained at slightly above medium.
Seth: The second third delivers a profile somewhat in line with that of the first third in that I am picking up tobacco, pepper spice and coffee flavors. There are some cream aspects with the cigar, and they are present on the finish with earth notes. Like before, full in strength and body.
John: Creamy chocolate with wood and a creamy finish starts the second third. Wood moves into the center of the profile after a few puffs. Some tannins join the wood as it settles in. The wood moves to the front of the profile, bringing with it creaminess as it progresses. By the halfway mark, syrupy sweetness returns to the end of the draw.
Jiunn: The second third goes from showing good balance to becoming less complex and enjoyable. It’s all red pepper spice and cedar. The dried nuts are entirely gone, which is a big miss because it gave a creamy and naturally sweet component to the profile. Strength and body remains medium. 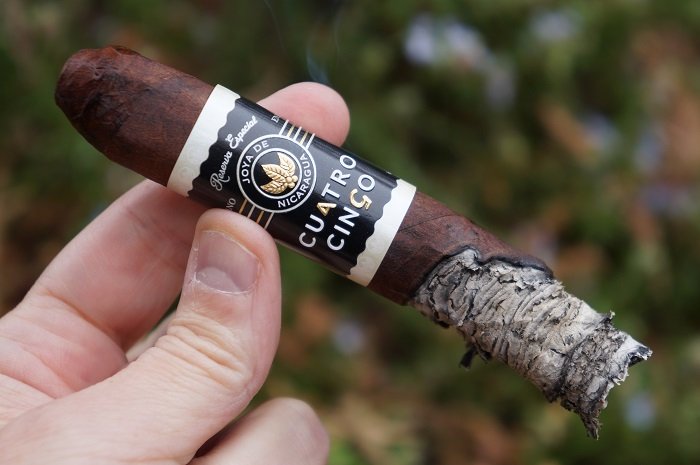 Aaron: As the final third begins, the earth has become dry and is even with the musty, dark wood. The black pepper is a bit behind. At a half inch in, the black pepper is very mellow. The retrohale is now musty, dark wood and dry earth. As the cigar comes to a close, the musty, dark wood is even with the dry earth while the black pepper was in the background. The strength bumped up to medium-full.
Seth: The final third delivered a profile of peppery spices, leather, charred wood, earth and coffee beans. Like before, full in strength and body. Strong finish. A nice finish. It is wonderful to have a cigar smoke well the whole way through.
John: Chocolate starts the final third as tannic hay combined with wood finish the draw into the post draw. A sharp wood sits near the front of my tongue after a few puffs. As the last third progresses, some dark earth moves into the center of the flavor profile. The dark earth moves to the front of the profile, and has some wood accents.
Jiunn: The final third is the same as the second third. Red pepper spice and cedar is all it’s giving me. No sweetness, no fruit, just mundane. Strength and body finishes the same medium. 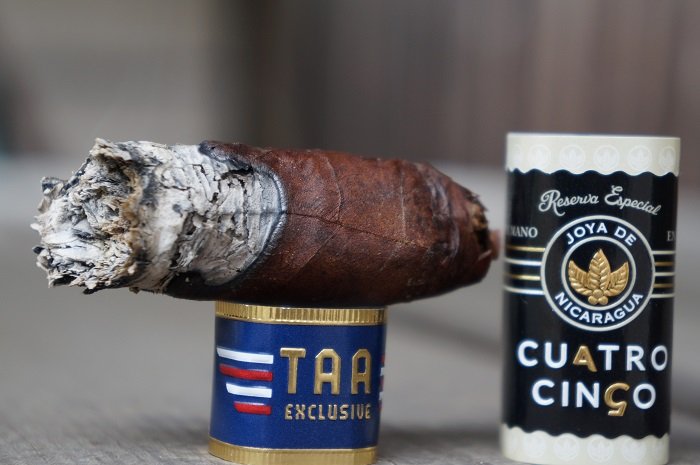 Aaron: The burn line was fairly wavy throughout. The cigar went out once, fairly early in the first third, requiring a re-light and a touch-up was necessary a bit later.
Seth: Great burn throughout.
John: The burn starts out straight, and becomes slightly uneven through the first third. The burn is uneven in the second third, eventually requiring a touch-up.
Jiunn: The cigar had a few issues with the burn, which led to a couple fairly major touch-ups. Aside from that, no issues. 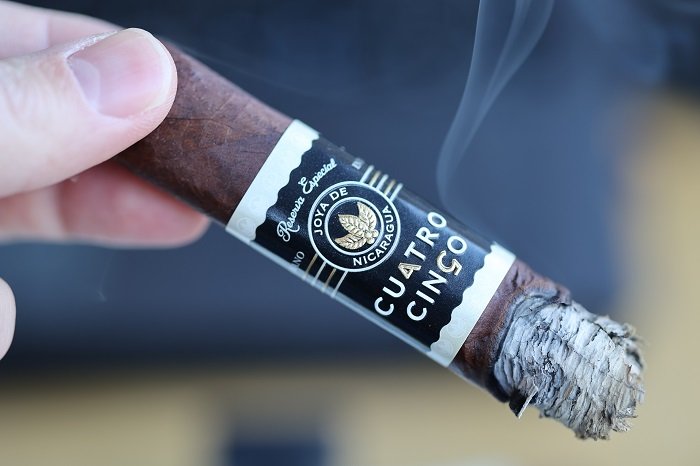 Aaron: The draw was slightly tighter than I prefer, but didn’t cause any issues with the smoking experience.
Seth: Perfect draw.
John: The draw is perfect, right in the middle of the zone between resistant and open.
Jiunn: The draw was perfect, giving the ideal air flow and resistance.

Aaron: The cigar began with dark wood, baking spice and light mustiness. Some earth and creaminess joined in the second third. The cigar fell off a bit in the final third as the flavor profile lost some steam. Overall, the Joya de Nicaragua Cuatro Cinco Edicion Americana TAA Exclusive was pretty good. It had a nice balance of flavor and strength. This is what I would expect from a TAA release, especially with it coming from an established line, carrying a unique vitola. The price point works for the experience and I’d have no problem coming back to this cigar.
Seth: The Joya de Nicaragua Cuatro Cinco Edicion Americana TAA Exclusive was an enjoyable cigar. Not the vitola I would gravitate towards, but a nice blend that delivered a flavor profile I could get behind in the evenings. I feel like this would be a blend that performs well for John, but I could be totally wrong. Maybe it is just that I see myself smoking this with John. Who knows? The coffee notes throughout were nice, and I liked the creamy profile in the second third as well. Full throughout. Not for those looking for something mild to medium, but really a nice Joya blend.
John: The Joya de Nicaragua Cuatro Cinco Edicion Americana TAA Exclusive reminds me why I enjoyed the Cuatro Cinco release so much. It’s a balanced combination of flavors that keeps me engaged through the review experience, even if the complexity dropped off in the last third. Construction was near perfect, with a single touch-up required and an ideal draw. I will continue to smoke every Cuatro Cinco I can get my hands on. Total smoking time was 2 hours and 17 minutes.
Jiunn: I figured a TAA version of Joya’s Cuatro Cinco would be an automatic home run. But give it to a TAA version to of course screw that up. The profile went from good balance to less complex and less enjoyable. Joya is usually so good about being a consistently good brand. The Joya de Nicaragua Cuatro Cinco Edicion Americana TAA Exclusive is no doubt a one off.