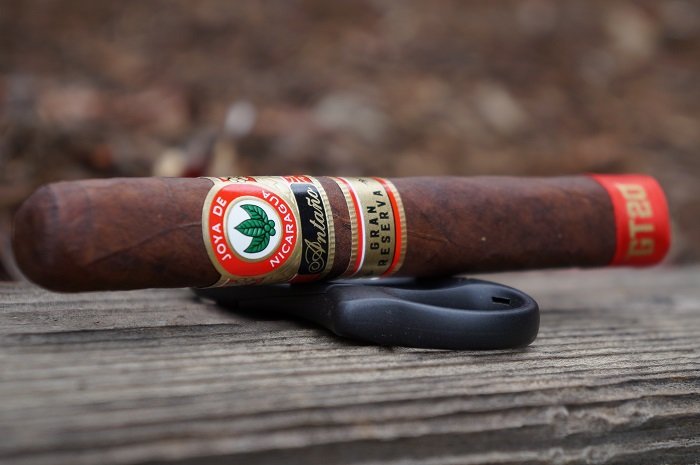 Aaron: The wrapper on the Joya de Nicaragua Antaño Gran Reserva GT20 is a marbled medium brown and has a network of lightly raised veins present going around the soft rectangle press. The seams are raised slightly and the caps are fairly well applied. There are three bands, with the primary and secondary carrying similar color profiles. The primary is the traditional design for the line while the secondary denotes Gran Reserva. The foot has a red ribbon and designates GT20 in gold. The aroma from the wrapper is wood, cocoa powder and light anise while the foot is stewed and jammy fruit. The pre-light draw brings wood and stewed fruit.
Seth: Nicely pressed, the Joya de Nicaragua Antaño Gran Reserva GT20 features a marbled Colorado wrapper that is dark Colorado and Maduro in coloring. There are some glitter sparkles present on the wrapper, and the veins are medium in size throughout. The cigar is firm throughout, and the aroma is that of raisins, chocolate and earth on the foot. The wrapper has some green herbal qualities with leather and tobacco.
John: The Joya de Nicaragua Antaño Gran Reserva GT20 comes in cellophane, it also has a UPC sticker with an integrated tear point to leave it intact. The cigar is double banded, along with a red ribbon foot band. The secondary band indicates ‘Gran Reserva’. In addition, the cigar has a box pressed shape. For aromas, the immediate one that stood out was a rum barrel type of sweetness, along with oak and tobacco. From the foot, I was picking up on medium strength hay, aged wood and mild sweetness.
Jiunn: The Joya de Nicaragua Antaño Gran Reserva GT20 has a mix between a red hued Colorado Red to Colorado Maduro. Veins are well pressed, seams tight, bunch and roll even and head well wrapped. Aromas from the wrapper gives (no joke) pre-cooked spicy top ramen. Aromas from the foot give rich black pepper and prunes. Cold draw tells yep, that spicy top ramen again. 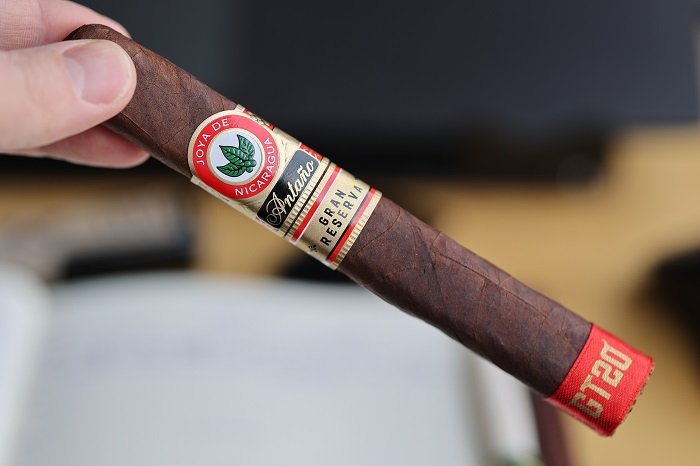 Aaron: The cigar begins with lightly toasted wood and mild baking spice. At a half inch in, the baking spice morphs to black pepper and has become a bit fuller. The retrohale brings an even mix of toasted wood and black pepper along with a light mustiness. At an inch and a quarter, a light stone fruit sweetness joins in. As the third comes to a close, the profile is musty, toasted wood up front, with black pepper and light stone fruit sweetness in the background. The strength was slightly below medium.
Seth: The first third starts off with some sharp spice notes and I am picking up cinnamon and pepper. There are some leather and oak qualities as well, and the finish has this molasses, syrup and earth quality. Medium-full to full in strength and body.
John: My first few puffs were wood and cocoa. Right away, dry wood is lingering into the post draw, with some mild syrupy sweetness through the center of the profile. By the 30 minute mark, bread and graham cracker push into the retrohale. Near the halfway mark, some medium strength wood along with tannins find the middle of the profile. Wood begins to drive the profile some time in the bottom half of the first third.
Jiunn: Charred this, charred that. While the coffee tones are great, it’s over-roasted, creating a charred “Starbucks” vibe. There’s also a layer of char in the baking spices and minerals. Retrohaling gives a nostril clearing white pepper blast, but it does try to counter that with some creamy nuttiness. The finish has a long and lingering charred baking spice and minerals. Strength and body is medium. 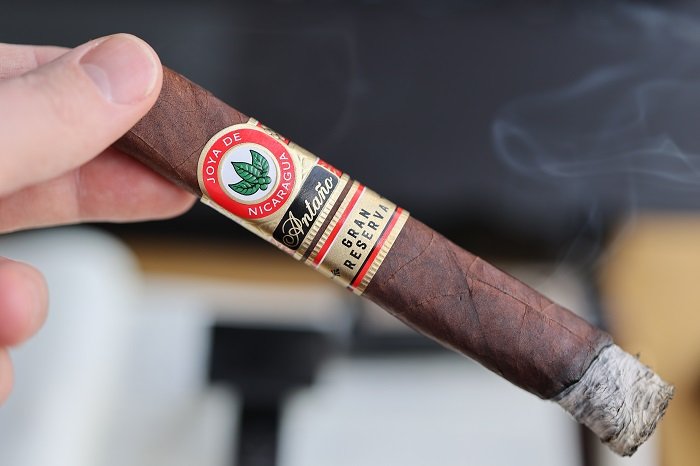 Aaron: As the second third begins, a chalkiness becomes present. At a half inch in, the chalkiness is even with the musty, toasted wood while the black pepper is now just a bit behind and the sweetness is no longer present. The retrohale is musty, toasted wood with light chalkiness. At an inch and a half, the black pepper has mellowed and a subtle sweetness has rejoined. As the third comes to a close, the musty, toasted wood and chalkiness remain even, with the black pepper in the background and some subtle sweetness. The strength has bumped up to medium.
Seth: The second third delivers that sharp spice profile that is paired with bourbon and oak notes. I am picking up some leather and dry earth notes as well and, like before, there is this molasses quality on the finish. Full in strength and body.
John: The second third got started with baking spices and wood. Wood and earth complete the finish into the post draw. As the second third settles in, hay joins the cedar on the finish. Syrupy sweetness, earth and baking spices combine on the retrohale by the halfway mark. There is no further evolution through the bottom half.
Jiunn: One huge improvement in the second third, the overly charred notes have dissipated. Essentially it’s now the same flavors without the char (roasted coffee, baking spices, minerals). Strength and body remains medium. 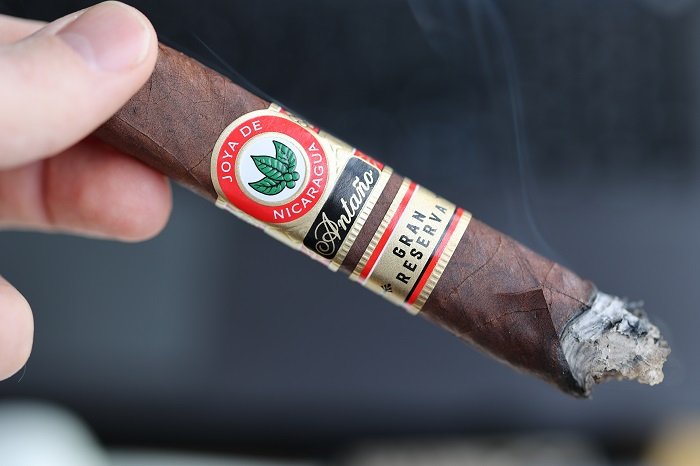 Aaron: The final third sees the chalkiness lighten up a bit. At a half inch in, the toast level picks up a bit and the chalkiness is now in the background. The retrohale is musty, toasted wood. At an inch in, some light, dry earth joins the profile. The cigar wraps up with musty, toasted wood up front with black pepper and dry earth in the background. The strength remained at medium.
Seth: The final third delivers a nice spice profile of cinnamon and pepper that is paired with bourbon and oak notes. There are leather and dry earth notes as well and the finish has that molasses quality. Full in strength and body. Nice finish.
John: Wood, bread and a general sweetness take the cigar into the last third. Dry wood is finishing the post draw, similar to the first and second thirds. As the last third settles in, earth moves into the center of the profile. By the bottom half, the earth has pushed to the front of the profile.
Jiunn: Luckily, the char is still at bay. The final third shows no changes from the second third. Still full of roasted coffee, baking spices and minerals. Strength and body finishes the same medium. 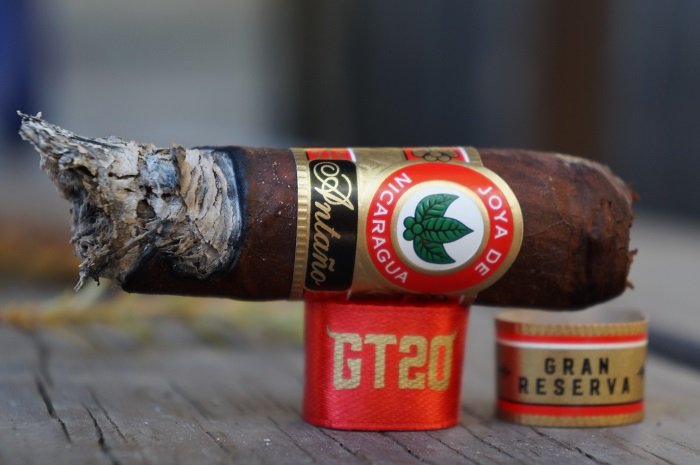 Aaron: The burn was a bit of a challenge as it was always wavy and required a decent sized touch-up in the first third. The cigar also went out three times, requiring re-lights.
Seth: Great burn throughout.
John: I can’t ever recall having a less than perfect burn with a Joya de Nicaragua cigar. There’s a first for everything. The cigar went out four times and required re-lights approaching the midway point of the first third, again in the second third, leading into the last third and then again in the last third. Four re-lights on a cigar are guaranteed to cause flavor problems.
Jiunn: Pretty terrible. Two complete re-lights, multiple touch-ups and very meek smoke production. 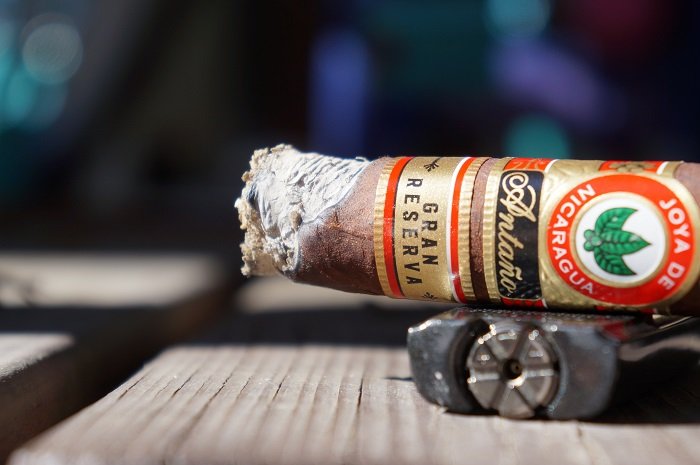 Aaron: The draw was slightly tighter than I prefer, but didn’t cause any issues with the smoking experience.
Seth: Nice draw from start to finish.
John: The draw had some resistance to it, roughly 2 to 2-1/2 notches towards the resistant spectrum.
Jiunn: The draw was great though, giving the ideal air flow.

Aaron: The flavor profile began with toasted wood and baking spice which quickly transitioned to black pepper. The second third saw the addition of a chalkiness that sat up front with the wood. The final third saw the chalkiness drop back and some dry earth join. Construction wasn’t on par with what I typically get from Joya. The Joya de Nicaragua Antaño Gran Reserva GT20 just didn’t smoke as well as previous renditions of the Gran Reserva. The previous ones were enjoyable, but this one was just a bit flat. The burn issues likely contributed to that, which could be an indicator of the tobacco in this blend. Unfortunate, but I don’t see coming back to this and would seek out earlier Gran Reserva releases.
Seth: I enjoyed the Joya de Nicaragua Antaño Gran Reserva GT20 and the flavor profile delivered, but it lacked some complexity and depth throughout. This was the first cigar where I found myself going back and forth between Average and Good in every third. Fantastic construction and wonderful burn throughout. I feel like there have been enough variations of the Antaño over the years that you can compare it somewhat to Fuente’s Opus X. This comes off as the Angel’s Share for the brand. The Gran Reserva always seemed more elegant than the classic Antaño, and this was just softer than the classic Gran Reserva offerings. Take that for whatever it means.
John: The Joya de Nicaragua Antaño Gran Reserva GT20 is a cigar I was very much looking forward to reviewing this year. The previous incarnation of the Gran Reserva was a treat to smoke, and I was expecting something similar from the GT20. While the first third was promising, the middle and last third were wood forward and average for the flavor profile. The draw had a small amount of resistance to it, and the burn was a disaster with four re-lights required through the review. Those re-lights had to have impacted the flavor performance. I would revisit the GT20 because Joya de Nicaragua has been one of the most consistent factories in Nicaragua, and I have to believe this is an isolated incident. Total smoking time was 1 hour and 43 minutes.
Jiunn: I’m 0 for 2 on Joya releases this year. This is almost unheard of. I didn’t honestly find one redeeming aspect in the Joya de Nicaragua Antaño Gran Reserva GT20. There was so much char build up in the first third that it caked my palate from the onset of the smoking experience. This compounded by an atrocious burn performance ultimately left me with a salty experience.