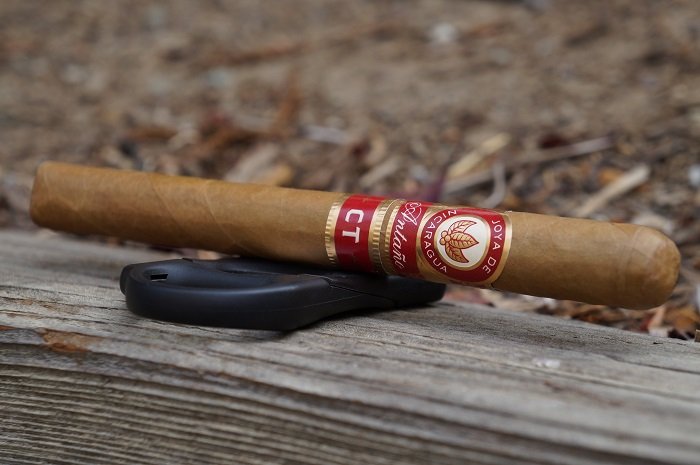 Aaron: The wrapper on the Joya de Nicaragua Antaño CT Lonsdale is medium tan with a tinge of green and has some lightly raised veins present. The seams are a bit raised while the caps are well applied. There are two bands, both with a red and gold color combination. The primary has the company name, logo and line name while the secondary band carries the sub line name. The aroma from the wrapper is hay with a supporting barnyard note. The foot brings cedar, stone fruit sweetness and a light smokiness. The pre-light draw consists of musty, slightly sweet cedar along with a mild spiciness on my lips.
Seth: Natural colored wrapper, dark golden hay color, the wrapper is silky in texture. Few veins present throughout. The Joya de Nicaragua Antaño CT Lonsdale is firm throughout. Well constructed with a great cap. Aromas of honey, hay, tobacco, leather and earth.
John: The JJoya de Nicaragua Antaño CT Lonsdale comes in cellophane and has a UPC sticker with a tear space so it remains intact when the cellophane is opened. The cigar is double banded with a red Joya de Nicaragua primary band, and a white, gold and red secondary ‘CT’ band. Aromas from the wrapper included sweet bread, and cotton candy undertones. Digging deeper, there is some faint wood and mustiness. From the foot, I was getting sweet tobacco and hay.
Jiunn: The Joya de Nicaragua Antaño CT Lonsdale has a silky smooth, golden brown, Colorado Claro wrapper shade. Veins are well pressed, seams tight, bunch and roll even and head well wrapped and capped. Aromas from the wrapper tell barnyard, beef jerky and hay. Aromas from the foot give cedar, hay and dried red pepper spice. Cold draw tells of hay, nuts and barnyard. 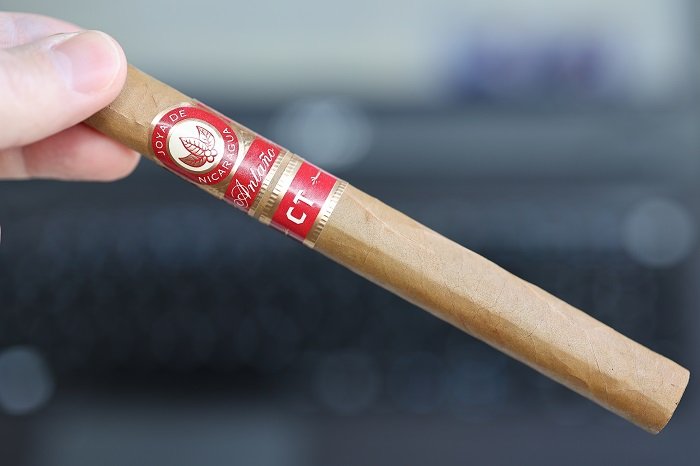 Aaron: The cigar begins with toasted cedar, black pepper and a light creaminess. At a half inch in, the black pepper has mellowed. At three quarters of an inch in, a light earthiness joins the profile. The retrohale is toasted cedar, earth and mild black pepper. At an inch and a half in, the earth is now right behind the toasted cedar and the black pepper has increased slightly while the creaminess has departed. As the third comes to a close, the toasted cedar is slightly ahead of the dry earth with black pepper a bit further behind. The strength was slightly above medium.
Seth: The first third starts out with this lovely hay and cedar profile that is paired with some tobacco, earth, honey sweetness, cream and sweet spice. Very balanced. Bread notes too. Medium in strength and body.
John: The first third begins with bread and baking spices, as spices, wood and creaminess combine to finish the draw. As the first third settles in, lingering medium spices join the post draw and begin to build. There is also a delayed sweetness on the post draw that serves to balance out the spice intensity a small amount. Some powdered cocoa comes in approaching the 15 minute mark. Some lingering post draw wood and mild dryness is also present by this point. Moving towards the halfway point is some medium-minus strength leather on the post draw.
Jiunn: The first third shows just about all the things that I like about Connecticut shades. Sweet grassiness, buttered bread, cedar and a hint of floral tones. Retrohaling deepens the cedar note as well as creates a nuttier (roasted nuts) profile. The finish is on the shorter end with toasted nuts. Strength and body is medium. 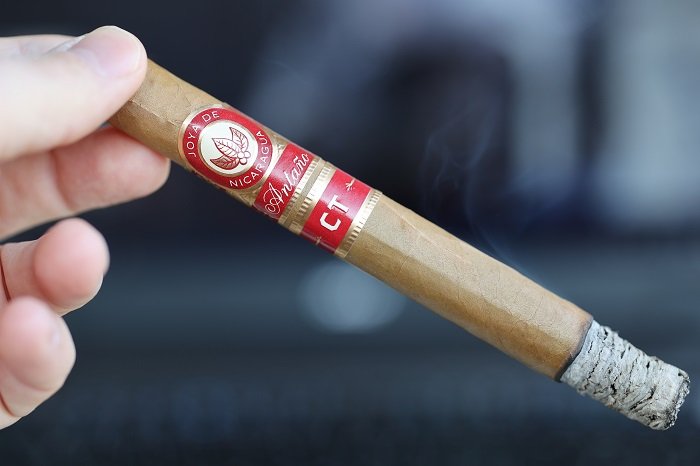 Aaron: As the second third begins, the earth becomes even with the toasted cedar. At a half inch in, the toast level increases a bit. The retrohale remains toasted cedar slightly ahead of the earth with mild black pepper. As the third comes to a close, the toasted cedar regains a slight lead over the dry earth with the black pepper a bit further behind. The strength remained at slightly above medium.
Seth: The second third delivers some solid cedar, hay, bread and leather notes that are paired with some cream and coffee flavors. Bits of dry earth and spice present as well. Medium in strength and body.
John: The second third gets going with bread, baking spices, wood and creaminess. The profile is similar to the first third but also all the flavors are very balanced. Mild cocoa and wood take root in the center, as dryness returns to the post draw. As the second third continues, spices move into the center which serves to balance out the wood.
Jiunn: The mix of flavors within the second third is the same, it’s just that certain flavors such as naturally sweet roasted nuts become fuller, while the sweet grassiness is slightly toned down. Strength and body remains medium. 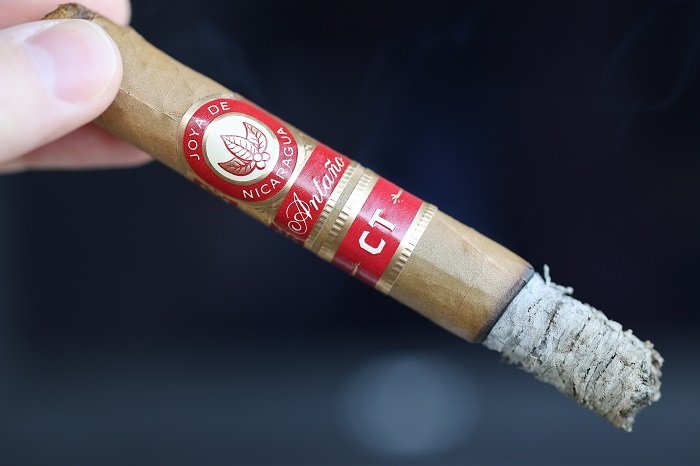 Aaron: As the final third begins, it continues with the toasted cedar slightly ahead of the dry earth with black pepper a bit further behind. The retrohale is now just toasted cedar and dry earth. As the cigar comes to a close, the toasted cedar remains slightly ahead of the dry earth while the black pepper is now very mild. The strength remained at slightly above medium.
Seth: The final third is slightly harsher than the second third while delivering those cedar, earth, hay, cream and pepper spice notes. Still medium in strength and body.
John: The profile is spicy wood forward leading into the last third. Some lingering medium spices combine with wood on the post draw. General sweetness develops under the profile as it progresses. The post draw spices move up to medium-plus through the remainder of the last third.
Jiunn: The final third is equally sweet in grassiness and roasted nuts (along with the same other notes). However, that dreaded bitterness surfaces it’s head. Not too much, but enough to make me enjoy the profile less. Strength and body finishes the same medium. 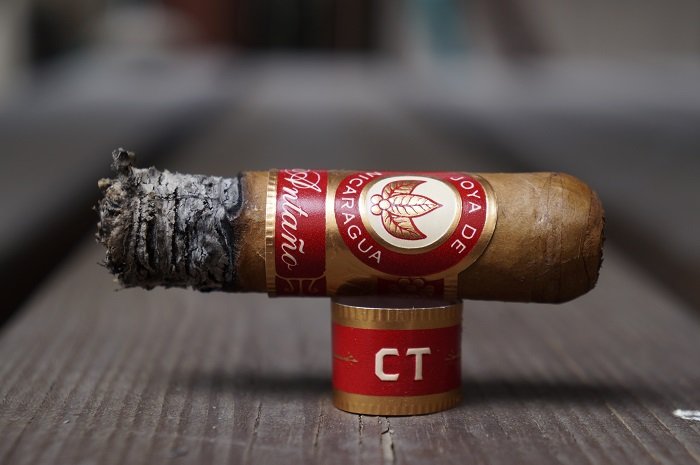 Aaron: The burn line was slightly wavy at times, but never required any attention. The ash held on in inch and a quarter increments.
Seth: Amazing burn. Beautiful construction.
John: I smoked three examples of the Joya de Nicaragua Antaño CT Lonsdale. The first reviewed cigar went out at the halfway point, and in the last third requiring two total re-lights. The second and third cigars had no burn issues.
Jiunn: Amazing burn performance. Even burn, tight ashes, cool burning temperature and ample smoke production. 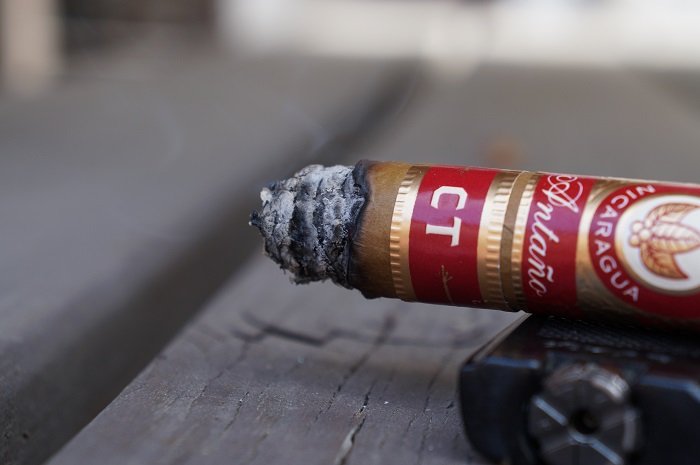 Aaron: The draw was perfect, with just the right amount of resistance that I prefer.
Seth: Very good draw throughout.
John: All three cigars reviewed had a consistently minor half notch of resistance into the resistant spectrum which earns an amazing draw.
Jiunn: Amazing draw performance as well, giving the best balance of air flow and resistance.

Aaron: The cigar began with toasted cedar, black pepper and a light creaminess. Some earthiness joined a bit later and the creaminess departed. The earth became even with the toasted cedar in the second third and then moved back a bit as the cigar went along and the black pepper became pretty mild. The Joya de Nicaragua Antaño CT Lonsdale started well, but by the second third, the profile became fairly average and maintained that level the rest of the way. I didn’t find this vitola to smoke as well as the Toro we reviewed previously, so choosing between the two, I’d go back to the Toro, but you’d need to check them out to see which you prefer.
Seth: The Antaño CT is a blend that has grown on me since it was first released, but I still prefer it in a larger ring gauge offering. I don’t like the profile delivered as much with the more concentrated Connecticut experience. I feel the blend has more pop and balance in a larger offering. The Joya de Nicaragua Antaño CT Lonsdale is still, a solid Lonsdale. If Joya ever did a Lonsdale sampler, that is probably the next time I would pick up this offering. Other than that, I would go with a Toro. Even the Corona Gorda offers a little bit more balanced than this Lonsdale.
John: The Joya de Nicaragua Antaño CT Lonsdale is a solid extension to the Antaño CT series. The profile was very consistent through all three reviewed cigars, with complex and rich flavors in the first and second thirds, and the last third being fairly spice forward. The first cigar exhibited burn issues, requiring two re-lights, but the other two cigars were flawless. All three cigars had fairly flawless draws. I would happily smoke and seek out more Antaño CT in the Londsale vitola. Average smoking time was 1 minute, 1 hour and 59 minutes.
Jiunn: After smoking several sizes, you really can’t go wrong with any Antaño CT. All will give you those nice white/soft notes that we all love in a Connecticut Shade. The bitterness may come, but it’s never entirely off-putting. I’d recommend getting a sampler pack of various Antanos and find out if the Joya de Nicaragua Antaño CT Lonsdale is your favorite.