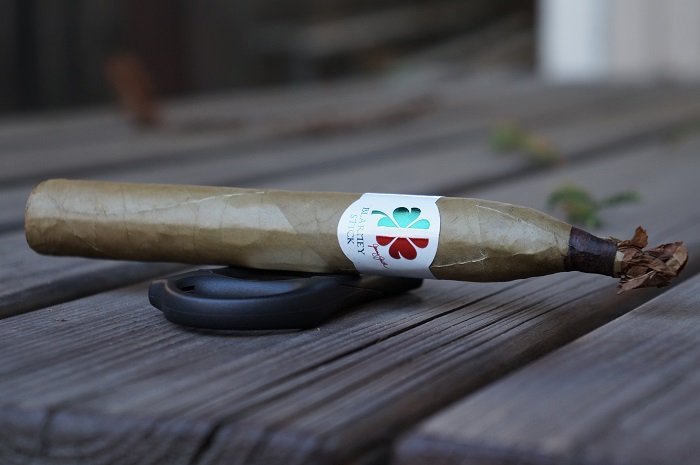 The candela wrapper on the Jeremy Jack Blarney Stick is a pale army green and has a couple of raised veins present. The seams are slightly lifting and easily visible. The head is tapered and finished with a non-candela colored wrap of tobacco with loose tobacco protruding from there. The band is white with a clover on it that has metallic green and orangish red on either side of a gap of that is meant to show the white to complete the colors of Ireland. The line name is in green with the company name is small red script. The aroma from the wrapper is grassiness while the foot brings a green tea note. The pre-light draw brings a light green tea note, but the larger player is the sweetness that has been applied to the head of the cigar. 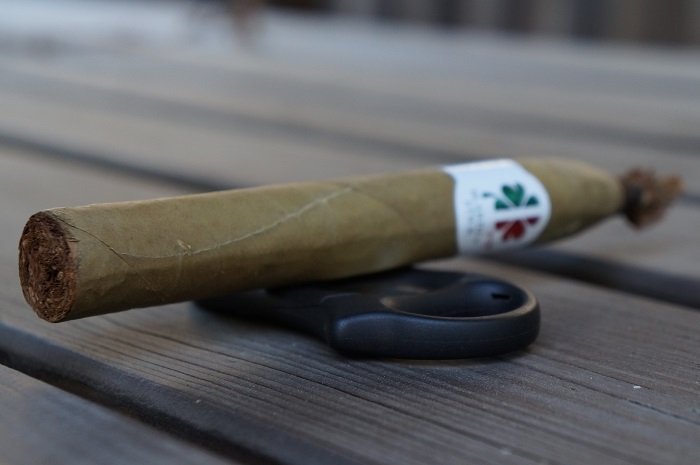 The Jeremy Jack Blarney Stick is firm in hand and sports a lighter green wrapper that has few to no veins present. It is a light Candela and the wrapper is silky in texture. The finish on the tapered head is awesome and it has this bush/shrub quality which is cool. I am picking up aromas of light spices, pepper, grass and tobacco, and there is a slightly sweetened tip on the end. 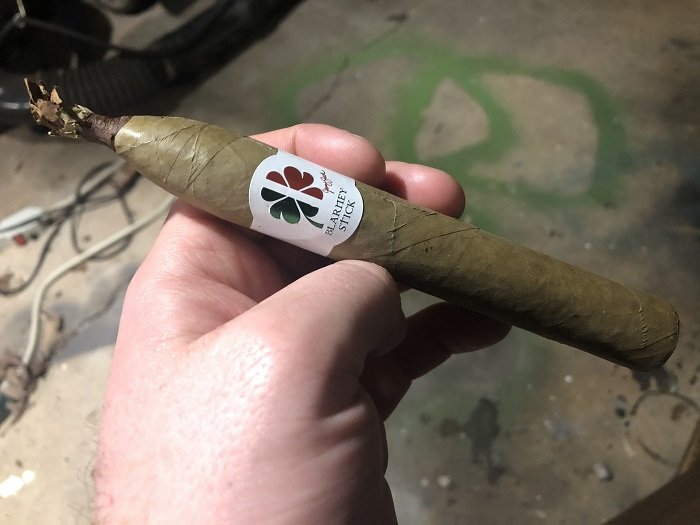 The Jeremy Jack Blarney Stick is obviously a candela wrapper, with shaggy tail cap that has darker cured tobacco defining it. The singular band is metallic green and red on a white background. Nosing the wrapper, I was able to pick up grass, barnyard and hay. In the foot, there’s almost a fountain pop like sweetness. 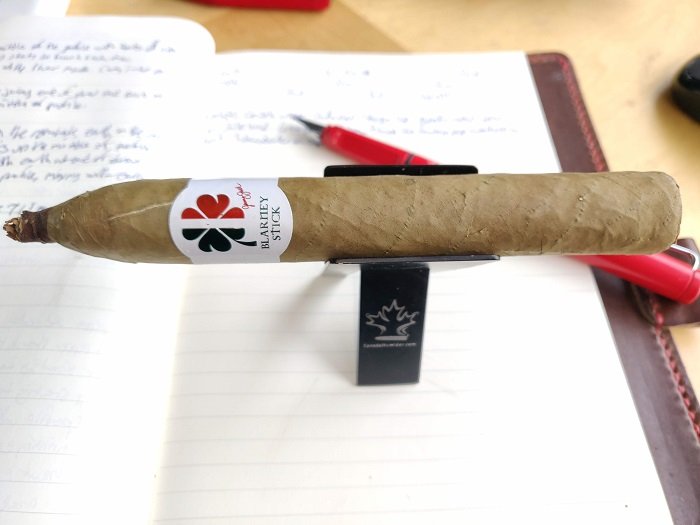 The Jeremy Jack Blarney Stick has an obvious candela wrapper shade. Veins are well pressed, seams tight, bunch and roll even and the flared head is well wrapped. Aromas from the wrapper give hay, barnyard and dehydrated green vegetables. Aromas from the foot give cedar, hay and a hint of white pepper. Cold draw tells dehydrated green vegetables, hay, cedar and sugar cane sweetness off the cap. 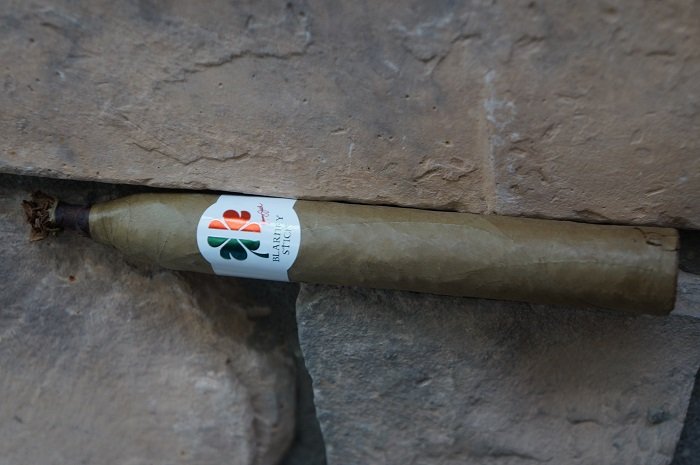 The cigar begins with wood, a light grassy note and the sweetness from the head. At a half inch in, no changes to the flavor profile, but the wrapper has cracked from the burn line up to just before the band. The retrohale consists of wood and toasted hay. At an inch and a quarter, the profile still has the wood and light grassiness as some mustiness has joined. The sweetness from the head is fairly subtle at this point. As the third comes to a close, the grassines is fairly light while the wood is up front and the mustiness is not far behind. The strength in this third was right at medium. 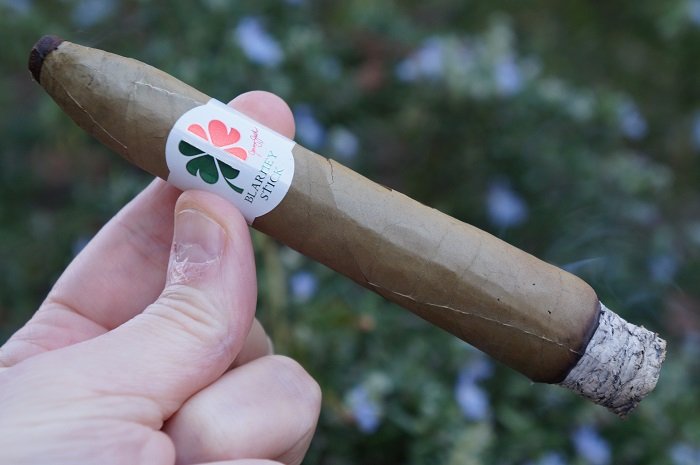 The first third being with the noticeable sweet tip flavor profile and it works well with the candela. I am getting some light peppery spice and grass, and the finish is of dry wood and soft earth. It is not overly complex, but it is a nice core flavor profile. I would classify the cigar as being between mild and medium in strength, body and flavors. 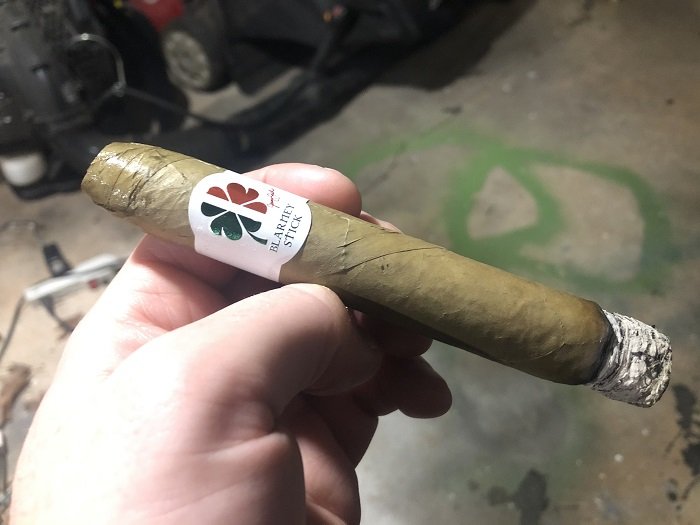 My immediate flavor experience is that the cigar has a sweet cap. That sweetness lingers through the draw and post draw. Some sweet earth begins to push through the retrohale, finishing with earth. It’s hard to pick out tobacco notes as the sweet cap is dominating my palate. Grassy hay begins to push through into the middle of the profile. That grass joins the post draw as the cigar settles in. Some bitterness hits the end of the draw, and post draw some time later. Again, it’s hard to de-tangle the sweet cap from the profile, so I’m reaching to find defined notes. Grassy earth defines the profile as the sweet cap begins to fade. On the post draw, earth is the primary flavor component. 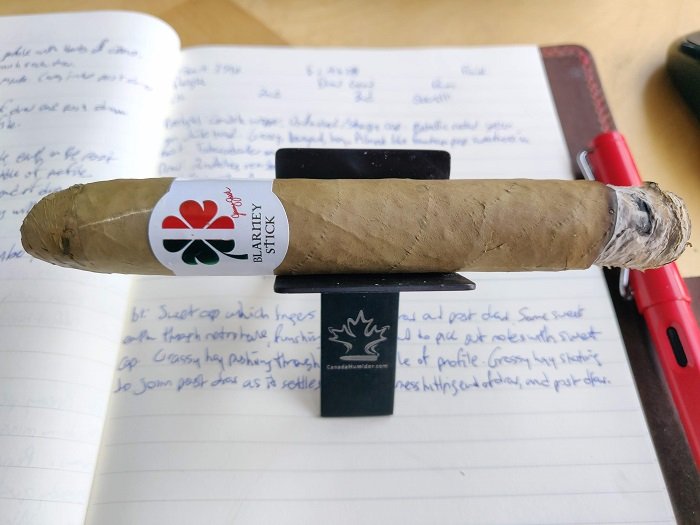 The first third gives a relatively smooth flavor profile. A blend of cedar, hay and airy dried nuttiness is front and center. This is followed by the undeniable sweetness off the lips especially on the finish. Retrohaling gives a bump in sharper cedar, followed by pronounced dried nuts and toast. Strength and body is mild. 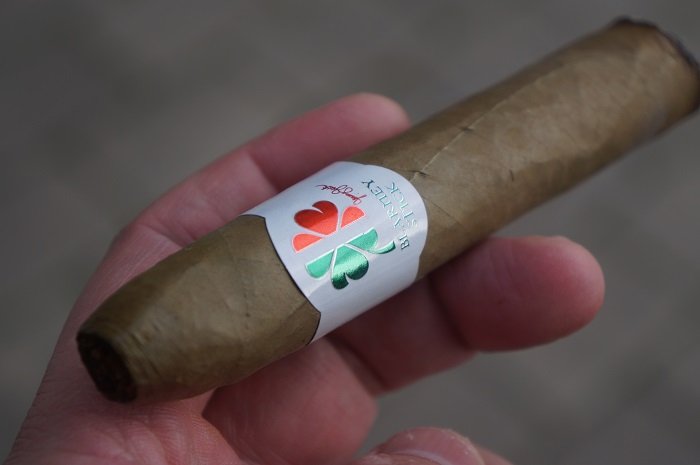 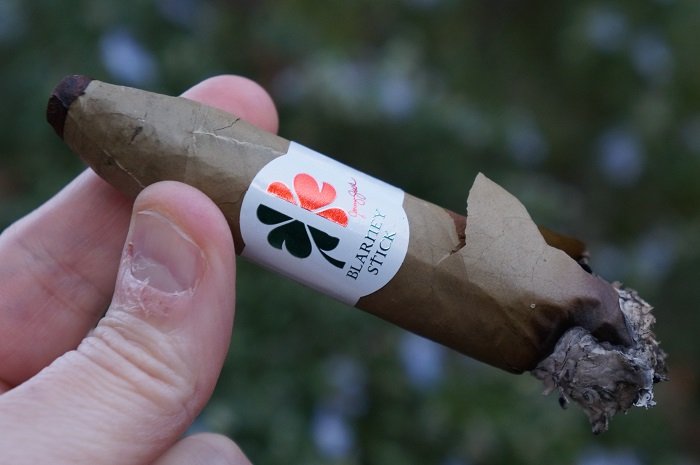 The second third shows a lot of similarities to that of the first third. I am getting that sweetened tip profile with some grass and peppery spice. There are some nutty qualities now emerging and the finish is of dry wood and earth. Like before, the cigar is mild to medium in strength, body and flavors. 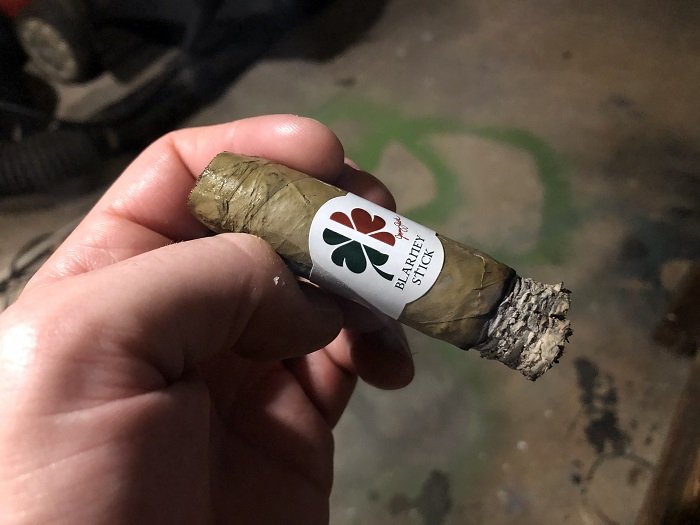 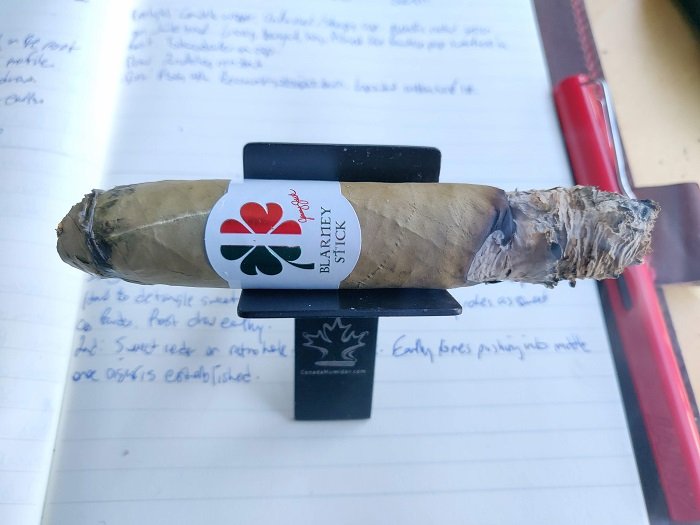 The second thirds flavor profile is more focused such that there is deeper nuttiness, cedar and hay qualities. I’m also picking up a hint of dried green vegetation as well. On the finish, the sweet tip is still lingering on the lips, and in turn the palate. Strength and body remains mild. 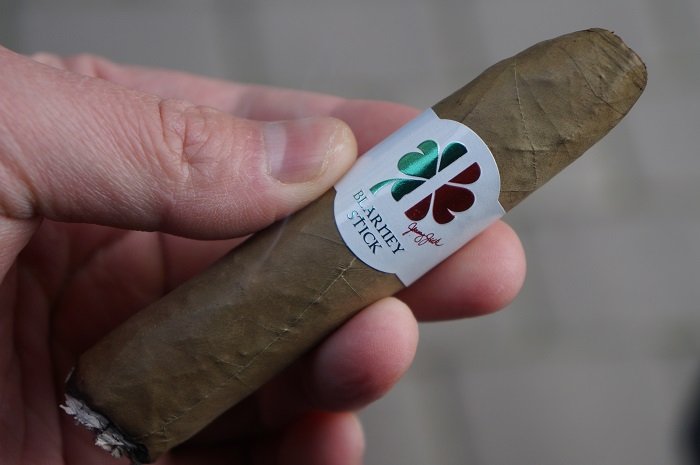 The final third continues on with the charred wood, mustiness and dry earth. At a quarter inch in, the char has mellowed a fair amount. At a half inch in, a vegetal note joins the profile. The retrohale is musty wood and dry earth. As the cigar comes to a close, the profile remains slightly charred and musty wood, dry earth and a vegetal note. The strength in this third dropped back down to medium. 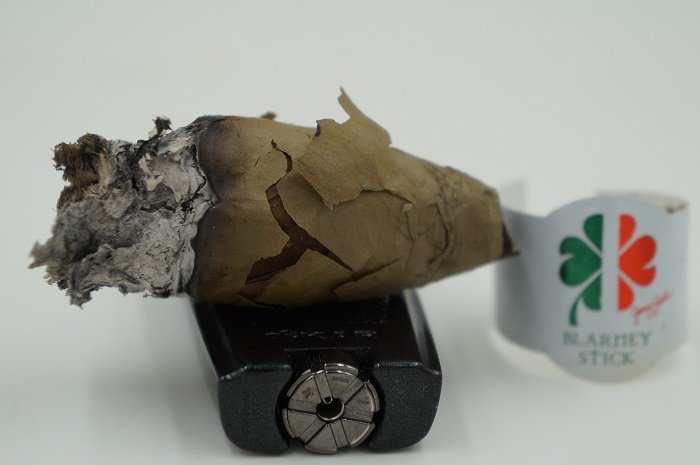 The final third is nearly identical to that of the second third and I am surprised the sweetness has held on this long. I am getting some nutty, peppery and grass flavors with a finish of dry earth and wood. Like before, mild to medium in strength, body and flavors. 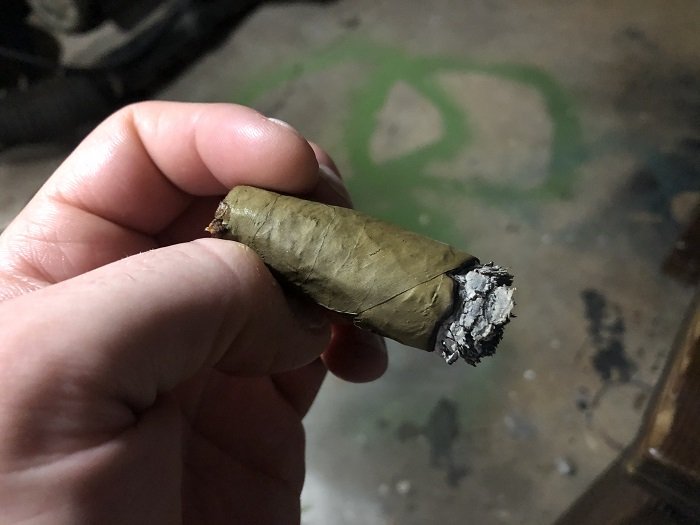 Sweet, grassy retrohale leading into the last third. There is a grass and earth combination to finish each draw. Mild sweetness accents the end of the draw, but has a short finish. Grass takes over the middle of the profile and intensifies to medium-full by the halfway point, taking over the palate. Post draw earth joins not long after, bringing some char with it. As the last third progresses, that post draw earthiness intensifies to medium plus. 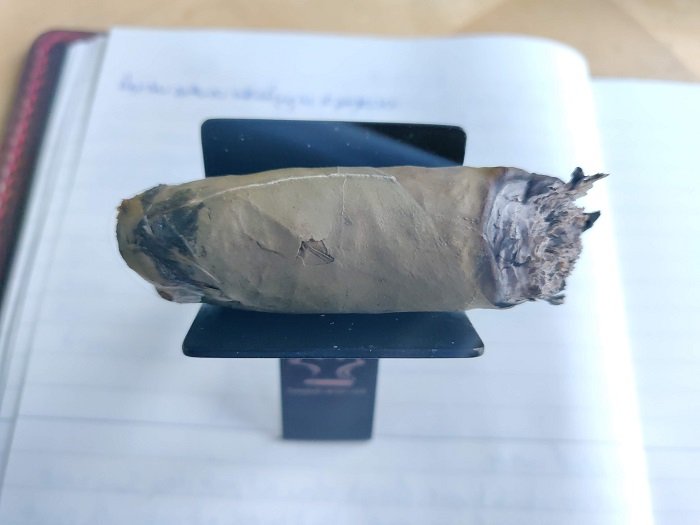 The final third picks up sharpness and harshness in the form of charred and burnt notes. These notes essentially has an overcast on the other flavors. Strength and body finishes mild. 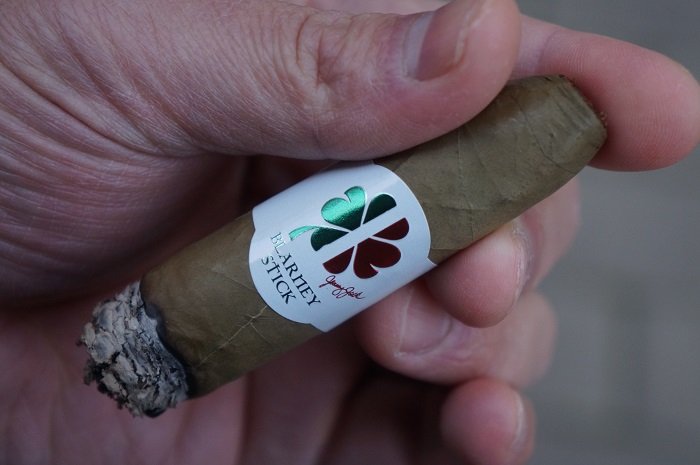 The burn was a bit wavy and required some touch-ups due to the wrapper cracking and expanding and not burning with the rest of the cigar. It also went out once, requiring a re-light. 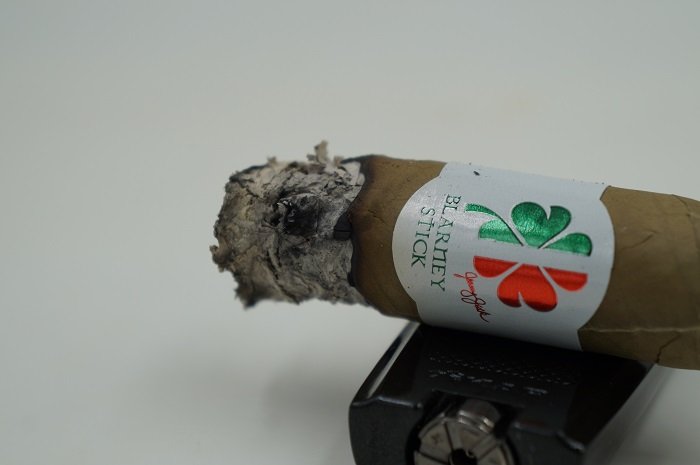 The burn was very good from start to finish. No problems at all. 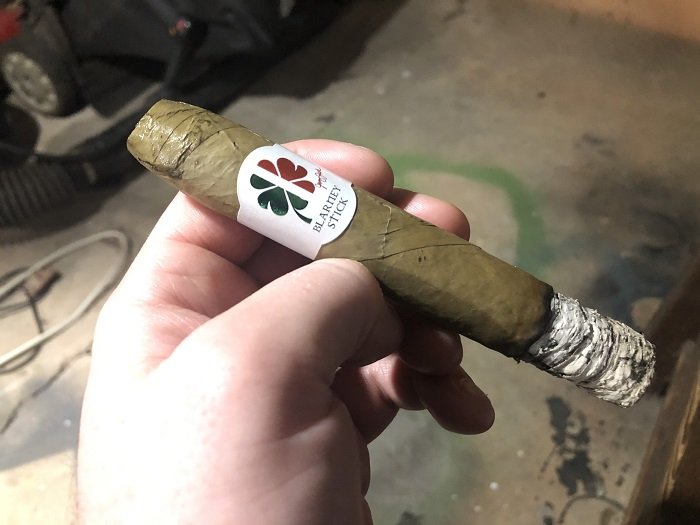 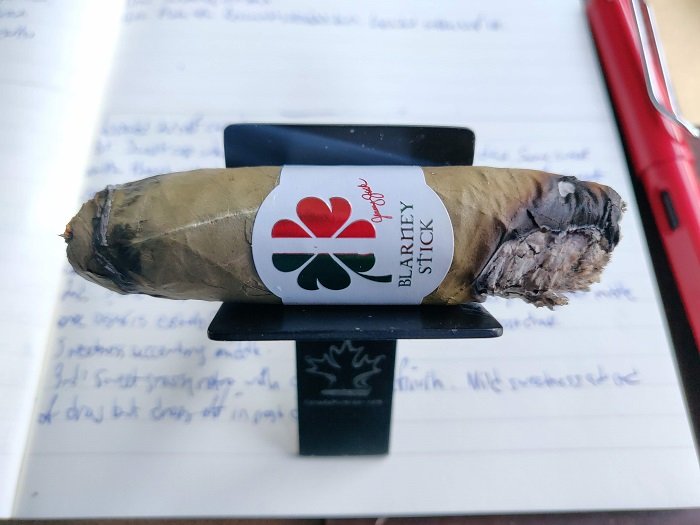 The burn performance was not that great. First off, the wrapper is incredibly fragile, leading to multiple splits. Also, the burn was wavy, requiring some key touch-ups. The cigar did provide ample smoke production and burned cool throughout. 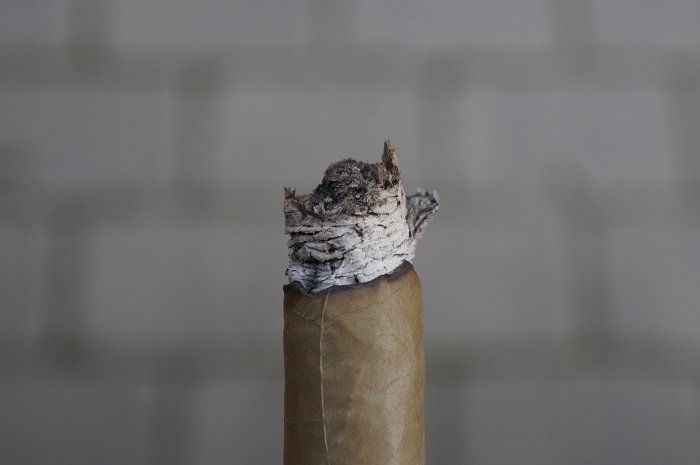 The cigar began with wood, light grassiness and sweetness from the head. As it progressed, some mustiness joined in. The second third saw some char, black pepper and dry earth join in. The final third saw the char mellow and a vegetal note join. The construction was a mess with the wrapper cracking and not really burning with the cigar. Strength was right around medium the whole way. I wasn’t expecting the sweetened head, but it only really was apparent through the first half inch. The Jeremy Jack Blarney Stick started fairly average and dropped down in enjoyment as the high level of char joined the profile. I’m always on the lookout for a good candela, but this doesn’t really fit the bill. The wrapper is far too fragile and made the smoking experience a bit of a challenge. This isn’t something I’m likely to return to, but I’m interested in the experience the other guys had with it.

Draw was a little loose for my liking, but no problems presented.

Nothing like a candela release themed around St. Patrick’s Day. Hell, Jeremy Jack went pedal to the metal naming the cigar Blarney after Blarney Castle/Blarney Stone. The amount of candelas released for St. Patrick’s Day is like the number of glam metal bands in the late 1980’s. There’s far too many, most of them garbage, but you can’t help yourself and want to overindulge and party like Tommy Lee. I also appreciate that Jeremy Jack sweetened the tip. Some may say it’s the safe road and that they didn’t work to make a game changing candela, but why bother? Illusione has already won that game. Make something that is full on green and Irish, add some sweetness and let those babies sell this month! Personally, I am looking forward to some Irish Car Bombs, Bangers & Mash, Murphy’s Irish Stout, headbutting some bloke and smoking a Jeremy Jack Blarney Stick to finish the day.

The draw has some resistance to it, roughly 2 notches, putting it in the good category.

I’m not quite sure what to make of the Jeremy Jack Blarney Stick. So often when manufacturers approach candela wrapped cigars they try to make up for the deficiencies of the candela flavor profile here. In the case of the Blarney Stick, I would imagine that the sweet cap is intended to offset the bitter grass and hay, but for me it ends up being a distraction. The overall profile, with the exception of the sweet cap, captures fairly closely what a candela cigar experience is like. As such, I found the overall experience to be fairly average. Total smoking time was a fairly relaxed 1 hour and 51 minutes.

The draw on the other hand was perfect.

The year isn’t quite complete without a candela cigar for St Patty’s day. Although it’s fun and festive, I admit I almost never look forward to candela cigars. They are typically too vegetal and boring in flavors for me. In the case of the Jeremy Jack Blarney Stick, I’m happy to say it wasn’t entirely like this. The flavors were overall mild (which is fine). But there were enough transitions and building of flavors that kept me engaged. What especially kept me engaged was the sweet tip. I’m typically quick to take a big deuce on sweet tips, but it actually worked on this cigar. It was a natural sugar cane sweetness that if anything, kept the flavors unique. I say be festive and try one out for the holiday.