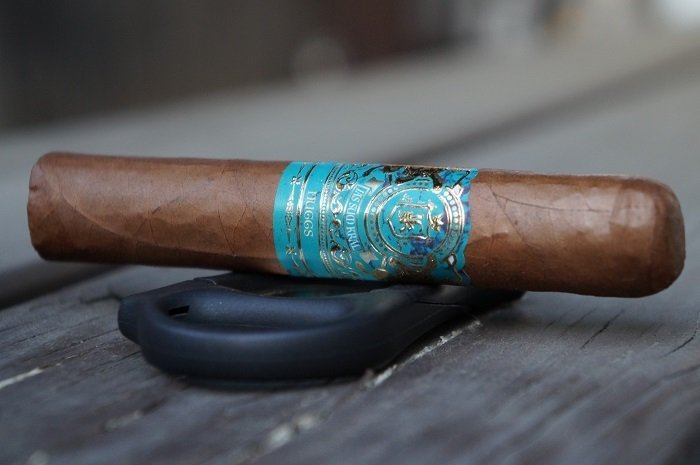 The wrapper on the Jas Sum Kral Nuggs Habano is light brown and has a few slightly raised veins present. The seams are easily visible as they are slightly raised. The head is finished off with a well applied double cap. The band has the traditional design for the brand but the color is aqua for this line. There is also an extended portion at the bottom of the band that denotes the line. The aroma from the wrapper is a mix of hay and dried urine while the foot brings sweet tea. The pre-light draw also brings sweet tea with a hay/wood component in the background. 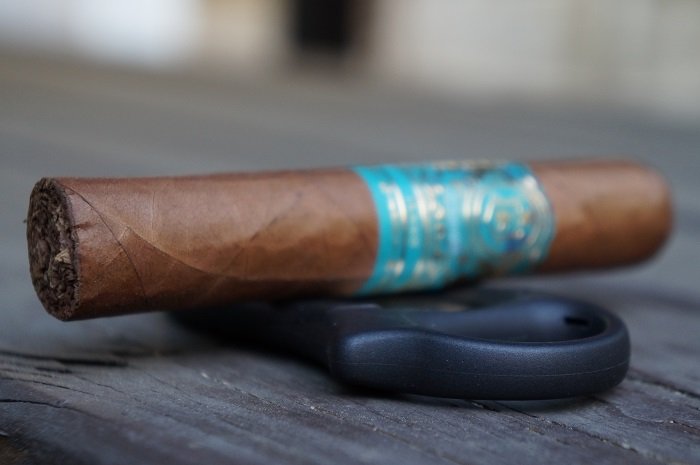 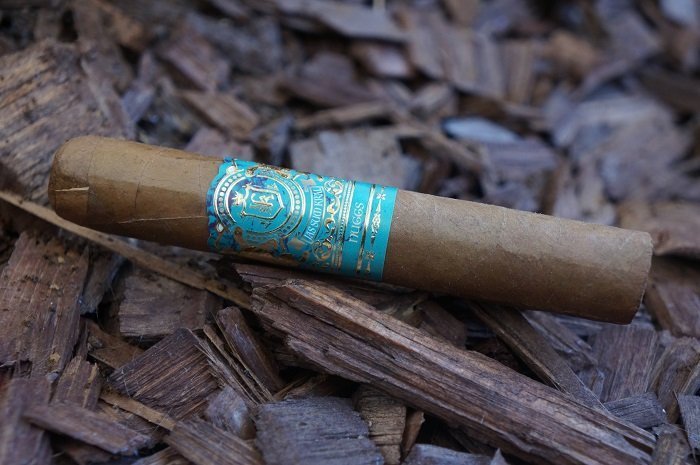 The Jas Sum Kral Nuggs Habano has a medium brown (Colorado Maduro) wrapper shade. Bunch and roll is tight and even, seams tight, veins for the most part well pressed and head finished off with a deep double cap. Aromas from the wrapper give cedar and flowers. Aromas from the foot tells slight white pepper, cedar and a meatiness. Cold draw gives mainly aged cedar and hay.

The cigar begins with a light wood that has a char to it along with a mild creaminess. At a quarter inch in, the wood shows a bit of a pine profile. At a half inch in, there is no char left, but the wood does still have a pine component and is a bit airy. The light creaminess is still present as well. The retrohale carries more of an oak note and has a slight mustiness to it. At an inch and a quarter, I begin to get hints of sweet tea at random times. The strength in this third is mild. 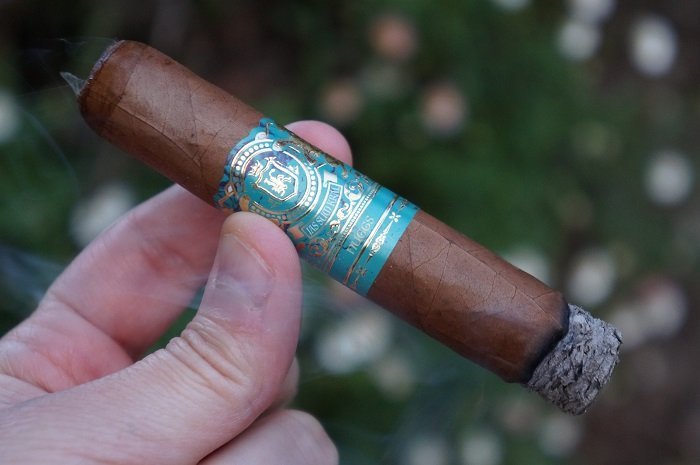 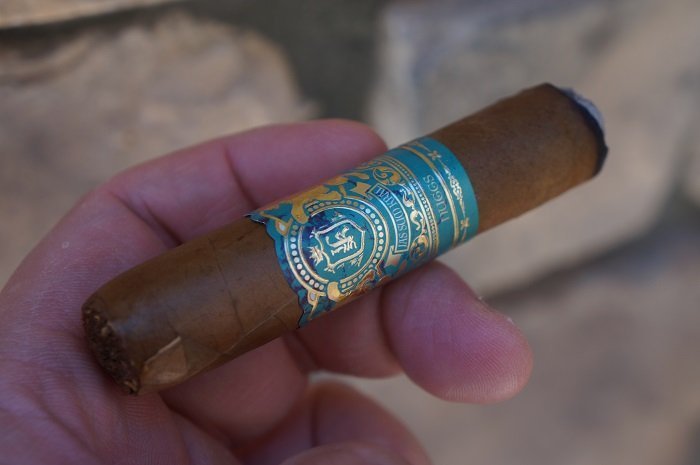 The first third has a buttery effect to the profile. The mouthfeel is slick and salivating. Flavor-wise, butter, light cedar, flowers and a hint of wood bitterness. Retrohaling brings out biscuits, wood bitterness and nuts. The finish is a mixture of butter and slight wood bitterness. Strength and body is medium.

As the second third begins, the light cream is replaced by a higher level of mustiness. At a quarter inch in, a slight bitterness joins the profile while the sweet tea note is still noticeable. The pine wood component is still the core of the profile. At an inch in, the pine is quite mellow as the mustiness and sweet tea notes have a fuller profile mid-draw. There is still a slight bitterness on the finish. The strength in this third bumped up to mild-medium. 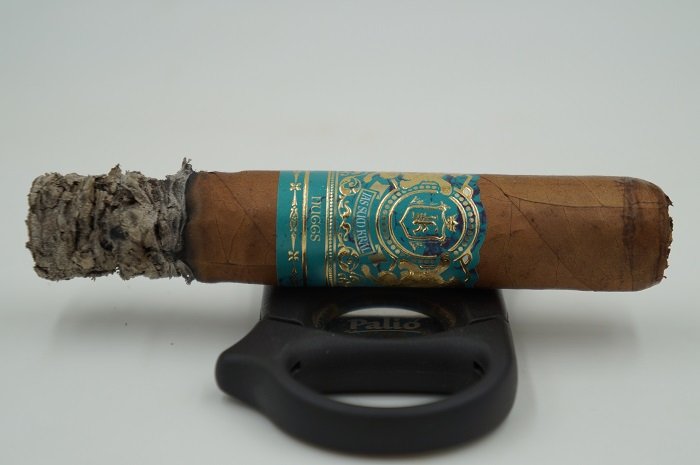 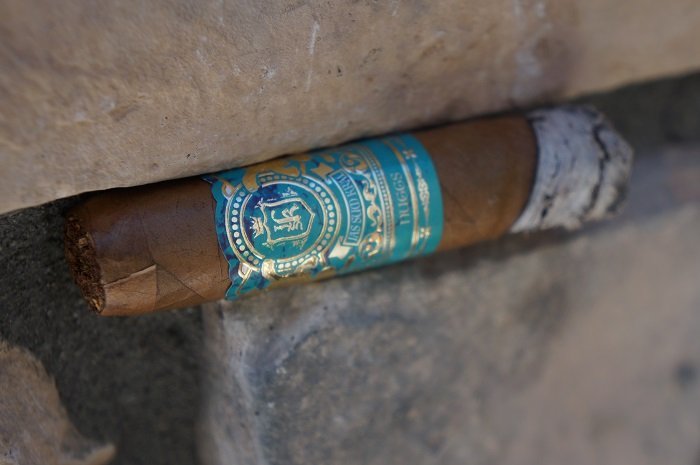 The second third still has the same flavors but the wood bitterness creeps up a bit more. Still other flavors of butter, light cedar, flowers and nuts. Strength and body remains medium.

As the final third begins, a slight char returns to the profile. At a half inch in, the profile is slightly charred and musty oak with a slight mintiness/bitterness. I am no longer getting any of that sweet tea note. The retrohale maintains the musty oak note. As the cigar comes to a close, the profile keeps the same components but just becomes a bit fuller. The strength in this third bumped up to slightly below medium. 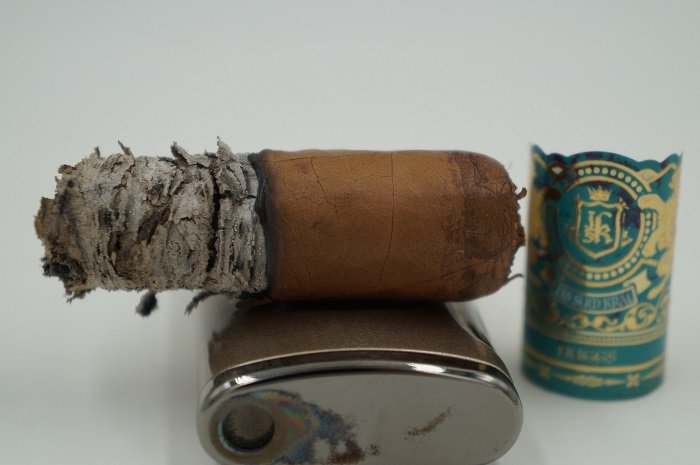 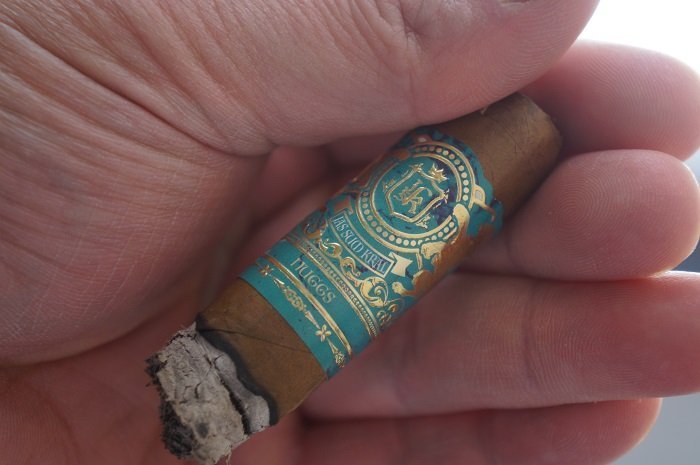 The last third loses out on a good deal of that buttery effect as well as increases in wood bitterness, cedar, and gets a bit hot on the burning temperature. Strength and body finishes medium.

The burn line was a bit jagged but never needed any attention. The ash held on in inch and a quarter increments. 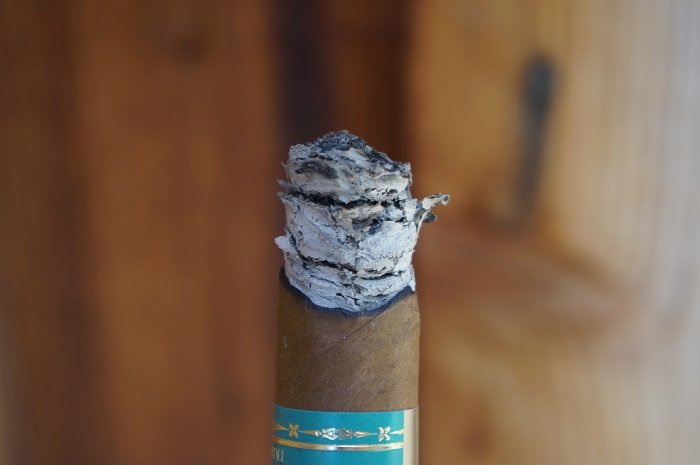 Burn performance was overall good. Only let downs was the flakiness of the ashes and the hot burning temperature within the last third. Aside from that, even burn and 1.5 inch ash increments.

The Jas Sum Kral Nuggs Habano began with a light charred pine note, cream and had moments of sweet tea. As the cigar progressed, the cream was replaced by mustiness and the pine transitioned to oak and there was some mintiness/bitterness present. The strength built from mild to slightly below medium. Construction was very good and didn’t need any attention. I have never used CBD oil, so I couldn’t tell you what it tastes like and what effect that had on the flavor profile of the cigar. My guess would be it contributing what I recognized as sweet tea and bitterness. As a cigar, I felt like it was an average experience and is on par with some other premium cigars. The price point for the cigar is quite high and I would think most of that comes from the CBD component. I wouldn’t really recommend this cigar to smokers for the cigar itself, but for those that are into CBD oil, it could be a draw as a delivery system for it. Not something I’m going to seek out again, but definitely an interesting concept now that CBD oil is becoming more prevalent and likely to be found in many consumable products in the future.

The draw was perfect.

Two main discussion points in which (in my opinion) interested parties care about. 1) The Jas Sum Kral Nuggs Habano does not get you “high.” Based on my understanding, CBD is meant for general health benefits and relaxes you. It was difficult to distinguish if I felt that or it was mainly due to the effects of nicotine delivery. 2) This cigar is not a heavy dosed nicotine delivery in which some come to expect from JSK. It is actually quite an easy going flavor profile that is light on spice and strength with flavors of butter, light cedar, flowers and a hint of wood bitterness.