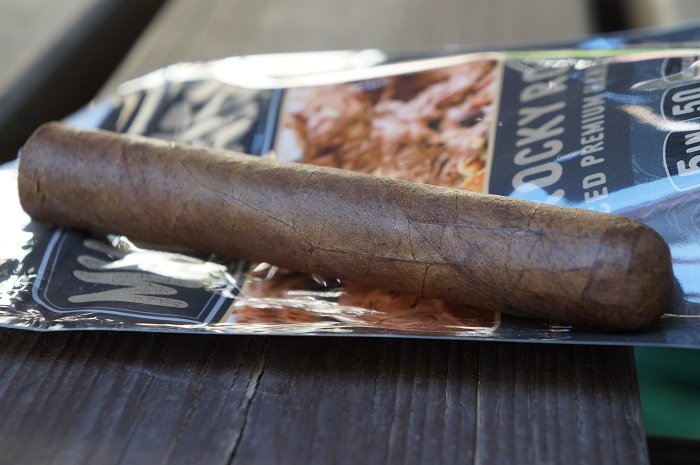 Aaron: The wrapper on the Jas Sum Kral Munchies Rocky Road is medium brown with some lighter shades around the veins and some darker freckles. There are some lightly raised veins, while the seams are a bit raised and the caps well applied. There are no bands on the cigar. The aroma from the wrapper reminds me of freeze-dried or space chocolate ice cream. The foot provides a much fuller ice cream experience, which I would say matches Rocky Road quite well. The pre-light draw provides a very airy wood note and the mildest of the freeze-dried chocolate ice cream. There is also a mild spiciness on my lips.
Seth: The Jas Sum Kral Munchies Rocky Road is well-constructed and firm throughout. There are small to medium sized veins present, and there are some oils on the wrapper. Solid maduro coloring. Really a dark coffee color, with aromas of chocolate, nuts, ice cream and salted caramel.
John: The Jas Sum Kral Munchies Rocky Road comes unbanded, and has sweet aromas that include faint strawberry, chocolate, vanilla, wood and tobacco. I’m impressed that I’m not picking up any trace of artificial sweetness that is usually a dead give away for flavored or infused cigars. From the foot, there is a more intense vanilla sweetness.
Jiunn: The Jas Sum Kral Munchies Rocky Road has a spotty Colorado wrapper shade. Veins are well pressed, seams tight, bunch and roll even and head well finished off. Aromas from the wrapper tell chocolate ice cream, fudge and a hint of cedar. Aromas from the foot give abundant chocolate ice cream, fudge and a faint black pepper spice. Cold draws reveals chocolate bar shavings and cedar musk. 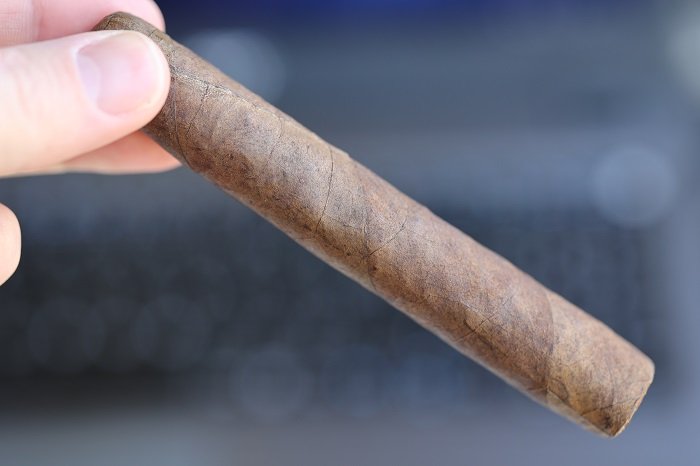 Aaron: The cigar begins with toasted cedar and baking spice. At a quarter inch in, a light creaminess joins the profile. The retrohale is toasted cedar with mild baking spice. At an inch in, the light creaminess has now morphed into a dried, creamy chocolate. It’s pretty subtle, but it’s there. As the third comes to a close, the toasted cedar is up front with the baking spice a bit behind and the subtle dried, creamy chocolate in the background. The strength was mild-medium.
Seth: The first third starts out by delivering soft earth notes that are paired with chocolate ice cream, nuts and salted caramel. There is some sweet creaminess present as well, and the cigar is smoking at a medium level for strength and body.
John: Dry hay and wood are the first detectable flavors, with a faint sweetness sitting underneath. Creamy vanilla and chocolate break through the retrohale at light levels. A mild wood is present through the post draw as it continues. A creamy vanilla begins to come through at the end of the draw as it settles in. Again, like the pre-light aromas, I’m not getting artificial flavor notes which I appreciate. Some time later, there is a light wood defining the center of the profile.
Jiunn: So let’s first talk about the obvious question, does it taste like rocky road? The answer is, yes it does. But there’s more to the profile than just that. The core flavor profile doesn’t mix all that well with the fudge ice cream flavors. There’s an overt leather bitterness and cedar. So this makes it such that I’m tasting bifurcated flavor profiles. When retrohaling, the rocky road flavoring becomes creamier, also introducing black pepper spice. Strength and body is medium. 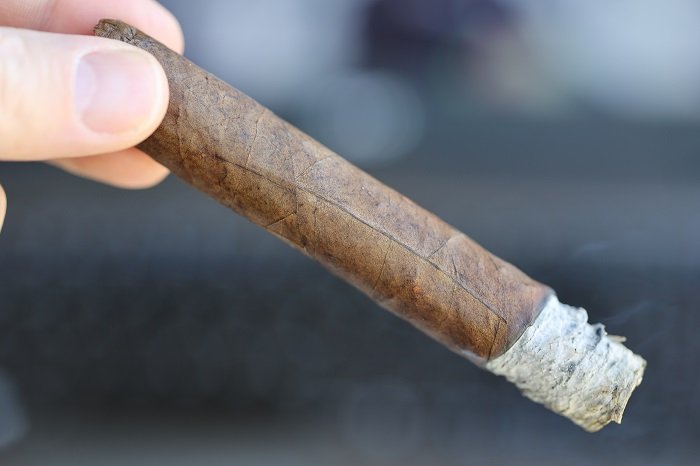 Aaron: As the second third begins, some mustiness joins the profile. At a quarter inch in, the baking spice picks up and is just behind the toasted cedar. The retrohale is now musty, toasted cedar and baking spice. At an inch in, the dried, creamy chocolate has departed. As the third comes to a close, the profile is musty, toasted cedar up front with baking spice right behind. The strength bumped up to slightly below medium.
Seth: The second third was nearly identical to that of the first third. Less sweet though with more earthy qualities. Like before, medium in strength and body.
John: The primary flavor makeup is still mild, creamy, sweet vanilla and wood as the cigar moves into the second third. The profile becomes more wood forward as it reaches the halfway point. The post draw is entirely defined by wood in the bottom half of the second third.
Jiunn: The second third increases spice levels of the black pepper spice. Spice is now prevalent through mouth draws and on the retrohale. Aside from that, the overall profile is unchanged, with leather bitterness, cedar and fudge ice cream. Strength and body remains medium. 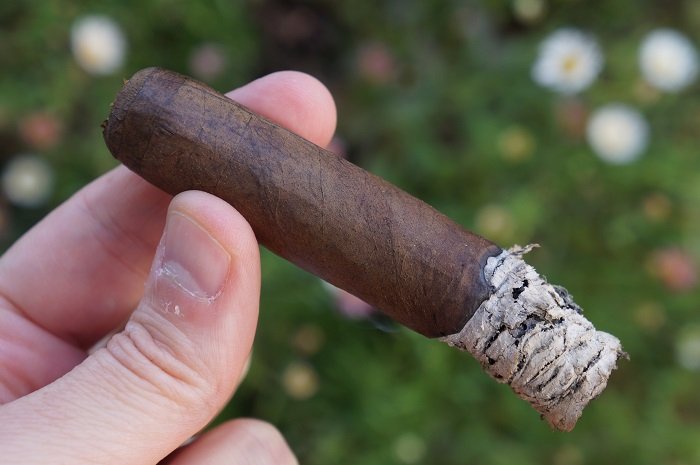 Aaron: The final third continues on with the profile from the second third. At a half inch in, the toast level increases a bit. The retrohale remains musty, toasted cedar and baking spice. As the cigar wraps up, it has warmed up a bit and is musty, heavily toasted cedar with baking spice right behind. The strength bumped up to medium.
Seth: The final third delivers less sweetness from the second third with some tobacco and earth notes. It still has that rocky road flavor profile though.
John: The last third is wood forward with a slightly tannic wood center that lingers into the post draw. As it settles in, sweetness returns, balancing out the wood.
Jiunn: The final third stays on pace with the second third. Welcoming black pepper spice, leathery tannins and bitterness, fudge ice cream and cedar. Strength and body finish the same medium. 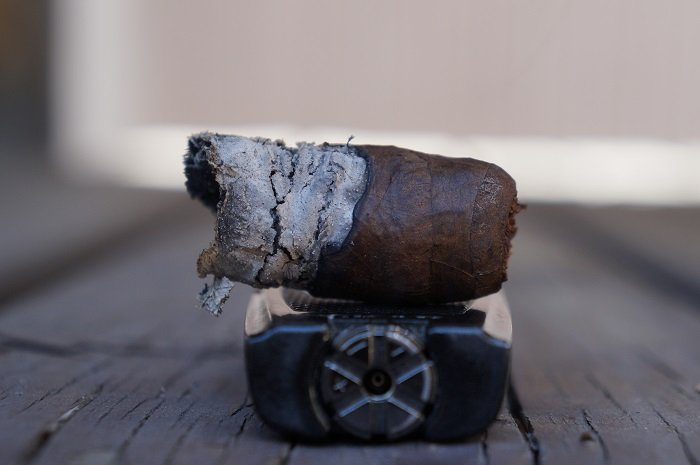 Aaron: The burn was a little wavy throughout, but self-corrected and the cigar went out once in the final third, requiring a re-light.
Seth: Very good burn throughout.
John: The burn was relatively straight through the entire review, and required no intervention. The ash held on well in 1-1/2 inch increments.
Jiunn: Beautiful burn. Tight ashes, even burn, cool burning temperature and ample smoke production. 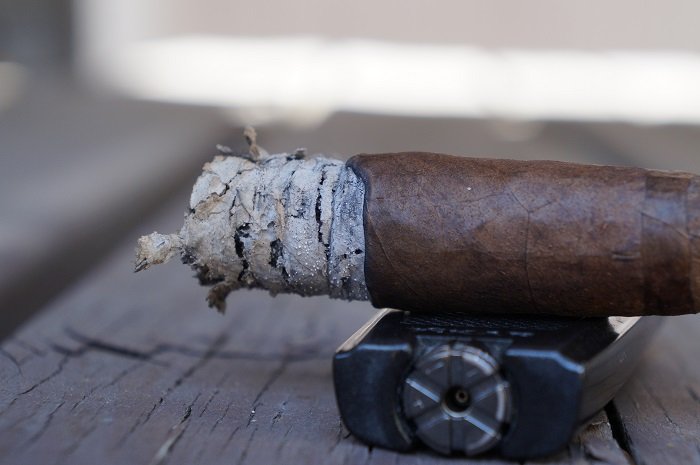 Aaron: The draw was perfect, with just the right amount of resistance that I prefer.
Seth: Great draw throughout.
John: The draw started out quite resistant, roughly 3-1/2 to 4 notches into the resistant spectrum. As the first third progressed, the draw opened to 2-1/2 to 3 notches into the resistant spectrum which moved it from an average draw to a good draw.
Jiunn: Flawless draw, striking the ideal balance between air flow and resistance.

Aaron: The cigar began with toasted cedar and baking spice. Some creaminess joined fairly quickly and then morphed into a dried, creamy chocolate. The second third saw the dried, creamy chocolate depart and the final third saw the toast level build up. The Jas Sum Kral Munchies Rocky Road had a fairly average flavor profile throughout. There were moments where the dried, creamy chocolate elevated the profile, but not enough to increase the overall enjoyment. Aside from that subtle chocolate note, the pre-light experience was really the only component that really made me think of Rocky Road which is typically how most infused/flavored cigars hit for me. The price point is low, so it’s something easy to pickup and try, but I don’t see it as something I’d come back to. I would be interested to try some of the other flavors in the sampler pack that is now being offered.
Seth: If you are looking to smoke a cigar that tastes like rocky road ice cream, then this Jas Sum Kral Munchies Rocky Road delivers that. It is stronger in flavor in the beginning, mellowing out in the end, but always delivering that rocky road flavor profile. Medium in strength and body throughout, you can really smoke this cigar in the morning or evening. It is not a flavor profile I gravitate towards, or want to smoke again, but it does deliver that rocky road flavor. I don’t smoke cigars or want a smoking experience that makes me think I am eating rocky road ice cream. I’m a grown man.
John: I’m always hesitant to review flavored or infused cigars, because typically they include a sweetened cap which I don’t find enjoyable at all, and the flavors have a lingering aftertaste of aspartame. None of this is the case with the Jas Sum Kral Munchies Rocky Road. Although the overall flavor experience wasn’t complex enough to move it into the good category, I found the flavoring to be approachable, balanced and pleasant on my palate. The burn was perfect and the draw had some resistance to it. I would recommend the Munchies Rocky Road to anyone who enjoys cigars in the infused or flavored category. Total smoking time was 1 hour and 41 minutes.
Jiunn: Probably the most important thing to note about this Jas Sum Kral Munchies Rocky Road is, yes, it does resemble rocky road, giving distinct fudge ice cream flavors throughout the entire smoking time. What it unfortunately fails at is having a balance with the core flavor profile. The core profile of black pepper spice, leathery tannins and bitterness, and cedar doesn’t mix well with the rocky road note, making it seem like I’m smoking separate cigars. In the word of “infused” cigars, this is a step in the right direction.