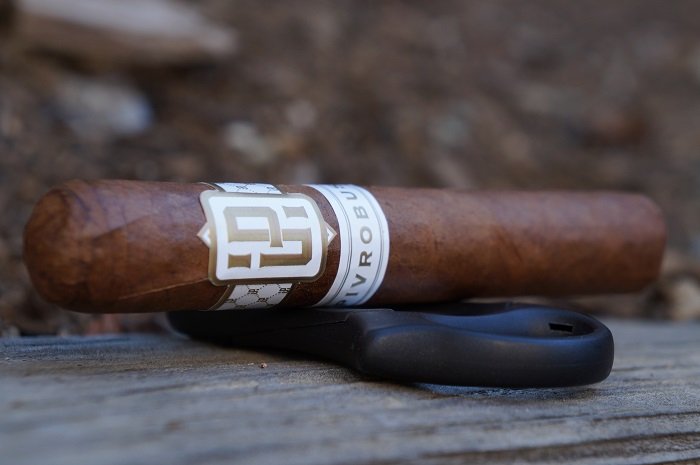 Aaron: The wrapper on the Illusione Jeremy Piven Collection PIV Robusto is light brown and has a few raised veins along with a network of fine veins. The seams are pretty smooth and the caps well applied. There are two bands, both in a white and gold color combination. The primary carries the logo for the brand while the secondary denotes the line or the vitola, which, I’m not sure. The aroma from the wrapper is cedar and toasted hay while the foot brings cedar, tobacco sweetness and mild spice. The pre-light draw brings airy cedar and floral notes along with a mild spiciness on my lips.
Seth: Finished with a lovely Colorado wrapper that has some light marbling, the Illusione Jeremy Piven Collection PIV Robusto has this antique brown color. Minor tooth present throughout with small veins. Firm in texture with a nicely done cap. Well constructed. Aromas of hay, honey, stone fruit, earth, tobacco and sweet spices. Wonderful.
John: The Illusione Jeremy Piven Collection PIV Robusto is cellophaned, and does not have a UPC sticker. The cigar is double banded, with a gold and white logo primary band, and a ‘PIV ROBUSTO’ secondary band. The aromas from the cigar included sweet chlorophyll, bread and mild wood. From the foot, I was picking up on sweet bread and mild wood.
Jiunn: The Illusione Jeremy Piven Collection PIV Robusto has a Colorado wrapper shade. Veins are well pressed, seams tight, bunch and roll even and head well wrapped. Aromas from the wrapper give cedar and dry barnyard. Aromas from the foot tell ample roasted nuts and white pepper spice. Cold draw gives sweet roasted nuts and a touch of white pepper spice. 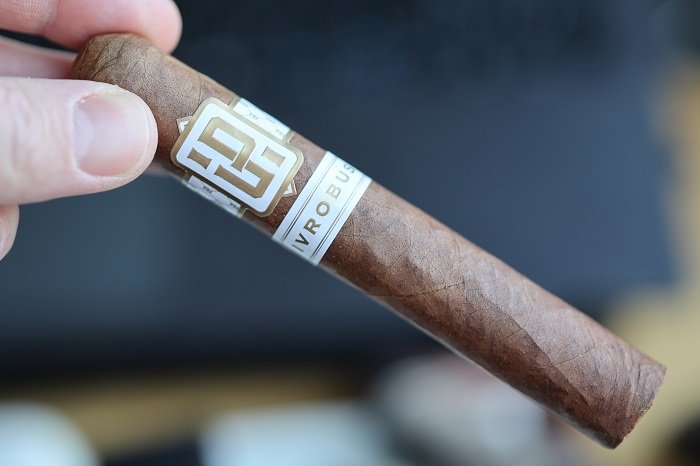 Aaron: The cigar begins with a detailed toasted cedar, with some mustiness and black pepper. At a half inch in, the mustiness and black pepper become a bit fuller. The retrohale is musty, toasted cedar with a black pepper zing. At an inch and a quarter, the mustiness is even with the toasted cedar and a light floral note joins the profile. As the third comes to a close, the pepper has mellowed out. The strength was slightly below medium.
Seth: The first third starts out by delivering sweet tobacco notes that are paired with cocoa powder, cream, nuts, spices, leather and stone fruits. There are some earth qualities as well, and bits of soft minerals on the finish. Medium in strength and body.
John: My initial flavor impressions were bread, wood and a dry, mild wood that carried into the post draw. Pepper joins the post draw right away at medium strength. As the cigar progresses, some graham cracker comes through the center of the profile. The cigar becomes wood forward by the halfway mark as much of the flavor complexity falls away.
Jiunn: The first third starts off with a punch of white pepper spice. The spice is full and sits on the back of the throat. Past the half inch mark, the profile settles down to charred wood and hay. Retrohaling is almost impossible, giving monstrous white pepper, but there is a softness in toasted nuts. The finish is a mixture of charred wood and white pepper spice. Strength at medium-full, body is medium. 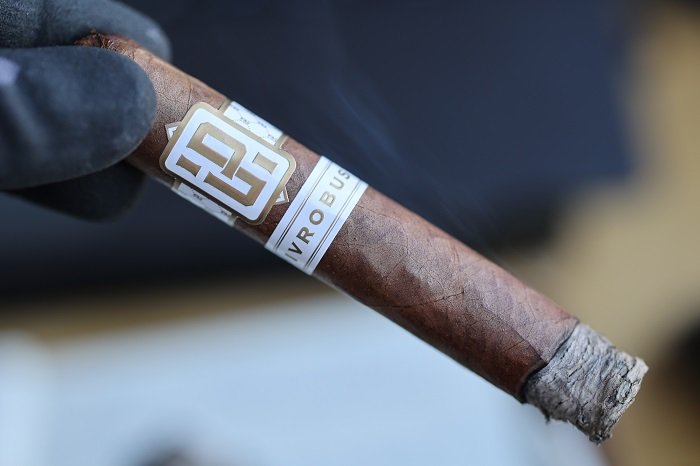 Aaron: The second third begins with a light creaminess joining in. The retrohale is now showing off the floral note. At a half inch in, the musty, toasted cedar remains up front with the creaminess and floral notes a bit behind and mild black pepper in the background. At an inch in, the creaminess and floral notes drop out and the toast level increases. As the third wraps up, the profile is musty, toasted cedar with mild black pepper. The strength bumped up to medium.
Seth: The second third continues to deliver a flavor of sweet tobacco, damp earth, cocoa, cream, nuts and sweet spices. The leather notes are present as well, and there are faint fruit qualities on the finish. Like before, medium in strength and body.
John: Dry wood leads the profile into the second third. Some sweet, light bread develops in the middle of the profile, finishing with light-plus, dry wood. As it progresses, the bread moves to mingle with wood at the front of the profile. Some pepper is present on the post draw, but is a faint background note. The second third is relatively linear.
Jiunn: The second third shows a little bit more promise. The profile becomes more cohesive and less off-putting. Charred wood is a distant past, as it’s now a mixture of fairly aggressive white pepper spice mixed with toasted nuts and hay. Strength and body is still medium-full and medium. 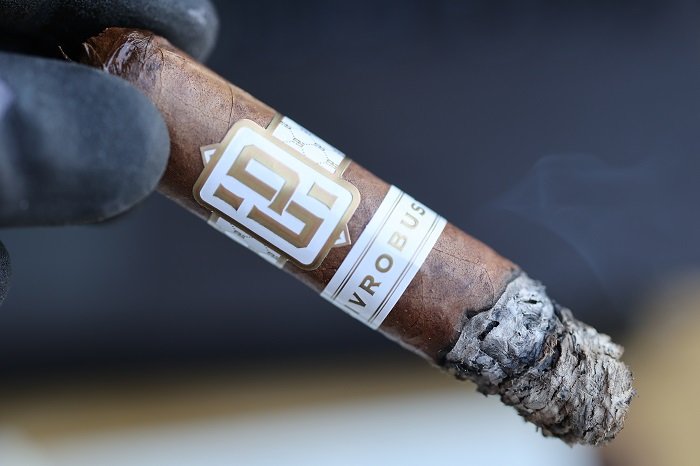 Aaron: As the final third begins, the mild black pepper has dropped out. At a half inch in, a light wood bitterness joins the profile. The retrohale is now just musty, toasted cedar. The cigar wraps up with the musty, toasted cedar and light wood bitterness. The strength remained at medium.
Seth: The final third delivers a flavor profile of damp earth, cocoa powder, leather and wood. There are tobacco qualities as well, and some faint spice and mineral notes on the finish. Medium in strength and body.
John: Wood defines the last third, at light-plus strength. Some dry wood comes through the post draw, as earth and minerality are present in the middle of the profile once it settled in. Some bitterness comes through at the end of the draw some time later.
Jiunn: The final third shows the same as the second third. Still medium-full strength and medium body with flavors of white pepper mixed with toasted nuts and hay. Given the subpar first third, this is a win. 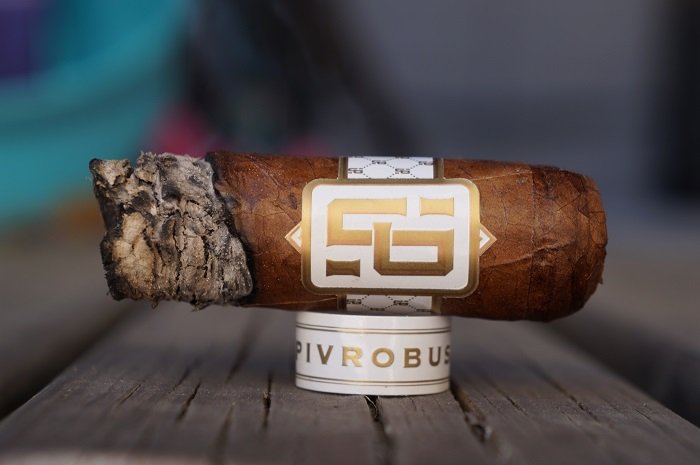 Aaron: The burn was an issue as the cigar went out four times in the first two thirds. The final third had no issues.
Seth: Nice burn throughout.
John: There was some waviness, but nothing that required intervention. Burn was struggling to say lit in the second third, but did not go out. Ash held on well, up to one inch at times.
Jiunn: Burn performance was overall good but could have used some help. A few touch-ups based on the wrapper refusing to burn was the main issue. The wrapper flavors are good, which makes this a relatively sizable miss. 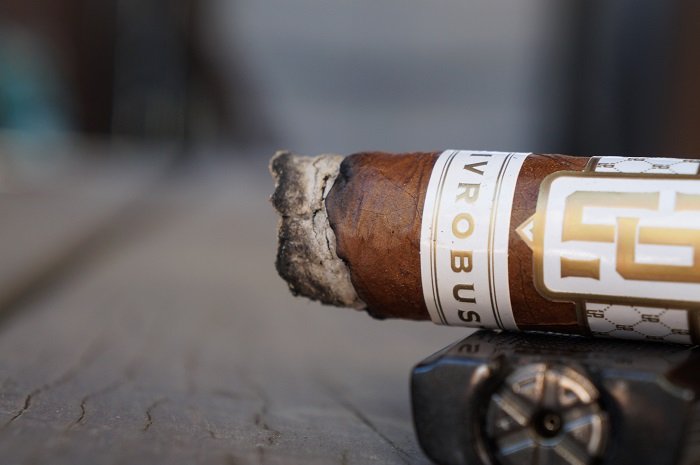 Aaron: The draw was slightly tighter than I prefer, but didn’t seem to cause any issues with the smoking experience.
Seth: Nice level of resistance throughout.
John: The draw had a fair amount of resistance to it, roughly 3-1/2 to 4 notches into the resistant spectrum.
Jiunn: The draw was a bit too snug for my liking, but not a big deal.

Aaron: The cigar began with a detailed toasted cedar, with some mustiness and black pepper. A floral note joined a bit later. The second third saw some creaminess join in and then the cream and floral notes departed later. The final third saw the black pepper drop out and a light wood bitterness join in. The burn issues seemed to have an effect on the flavor as the cigar tailed off. A good start for the Illusione Jeremy Piven Collection PIV Robusto, but the burn likely contributed to the light notes of cream and floral notes falling off. If they had remained, I feel the cigar would have remained strong. I’d like to revisit this to see if a better burn would contribute to a longer enjoyable experience. The price point is a bit high, but I’d be up for giving it another go.
Seth: The Illusione Jeremy Piven Collection PIV Robusto was a nice cigar, and it is a cigar I would come back to down the road. Really solid medium offering with good flavors. The core flavor profile had a nice level of complexity which kept the cigar entertaining throughout each third. There was not too much transitioning, but it wasn’t needed. The earth, cocoa, cream, spice and nut flavors were lovely. It’s a cigar I could smoke all the time. In terms of strength and body, and comparing it to other Illusione releases, I would put it in the Singulare and Fume D’Amour category.
John: I think the Illusione Jeremy Piven Collection PIV Robusto had quite a bit of hype to it, and certainly was one of the releases I was looking forward to reviewing in 2022. In a word, disappointment. The profile showed a glimmer of complexity in the first third, and then became linear through the rest of the review. It was still pleasant to smoke, but Illusione has set some fairly high standards with blends in the past, and it would have been great for this to be one of them. But it was not meant to be. The burn was pretty flawless, while the draw had a fair amount of resistance to it. The price point on these means I’m unlikely to return for a second go, especially when Illusione has a deep pool of great releases at great prices for me to choose instead. Total smoking time was 1 hour and 51 minutes.
Jiunn: Can somebody get me a good new release Illusione? I don’t understand what is going on here. The recent offerings from Illusione and (TABSA for that matter) have been so unbalanced, spicy, earthy, and at times, just off-putting. The Illusione Jeremy Piven Collection PIV Robusto is one of the worst offenders of this to date. I really hope humidor time will help with this cigar, because at this point, this is a clear miss.