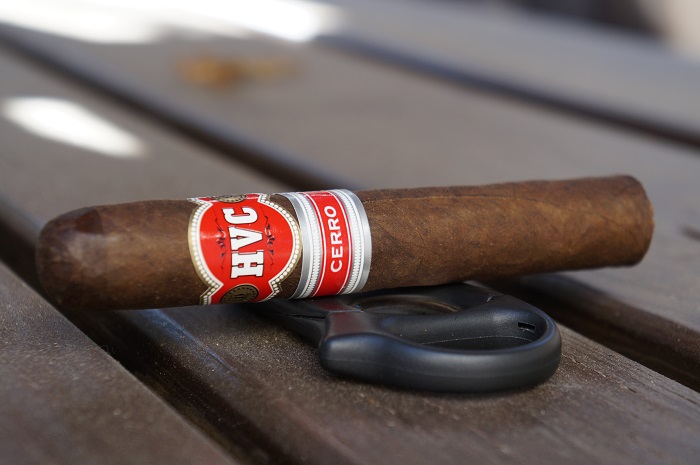 The wrapper is milk chocolate brown with some darker marbling in some areas. There are some veins present, but they are well pressed. The seams are slightly visible but smooth as is the nicely applied triple cap. There are two bands with the first being an older Cuban style band that is primarily red with a secondary strip band that is also in the Cuban style and carries the line name. The aroma from the wrapper is a bit of barnyard funkiness and white pepper while the foot is a mix of leather, graham cracker and white pepper. The pre-light draw is a mix of slightly green and sweet hay and some leather. 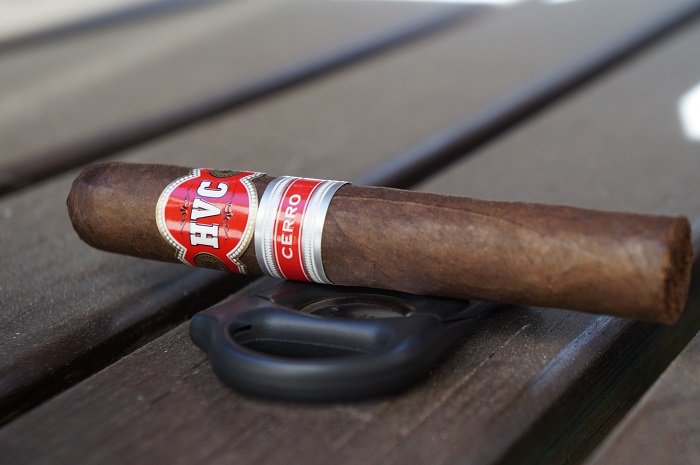 The HVC Cerro Maduro Robusto is firm in hand and it has a nice chocolate coloring to the wrapper. There is some tooth present in the wrapper and few veins that are fairly medium in size. The triple cap is applied well to the cigar and there are no soft spots throughout. It is a solid maduro cigar and like I just said it has a nice chocolate coloring to it. The foot is giving off aromas of rich earth, sweet cocoa, soft spice and raisins while the wrapper has this nice barnyard like aroma. 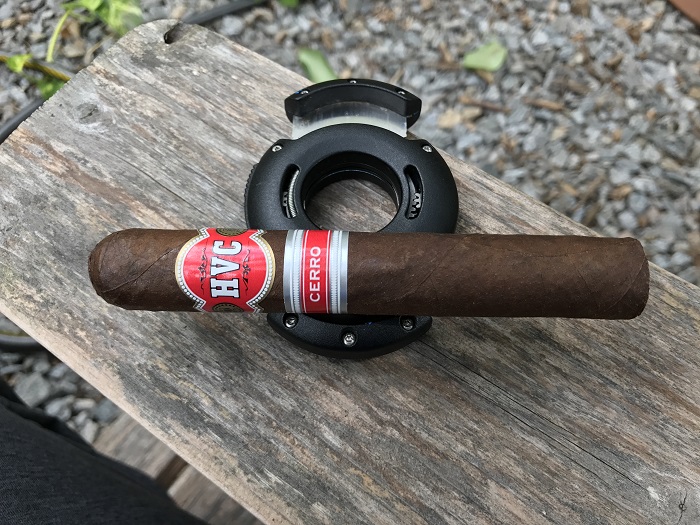 The HVC Cerro Maduro Robusto has a hearty maduro shaded wrapper. Veins are well pressed and seams tight. Bunch and roll feels well executed as there is a uniformed give throughout. The head is finished off with a nicely applied triple cap. Nosing the wrapper gives slight barnyard, faint perfume and dry wood. Nosing the foot tells amplified black pepper, spicy cedar and roasted nuts. Cold draw reveals mixed nuts and dry wood. 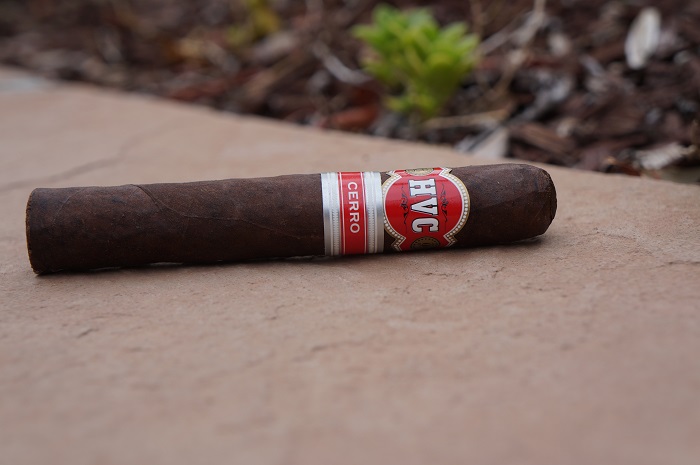 Initial draws bring a full mix of wood and black pepper with a bit of cocoa in the background. At a quarter inch in, the wood and pepper settle down a bit which creates a better mix of the trio of flavors. The retrohale brings a gritty and slightly creamy cocoa note. At an inch in, the pepper fades back quite a bit leaving wood up front along with the cocoa and the profile is slightly drying. A little further in, the cocoa really picks up becoming even with the wood and even fuller on the retrohale. As the third comes to a close, the wood takes a slight lead from the cocoa and the pepper is very faint. The strength in this third was right at medium. 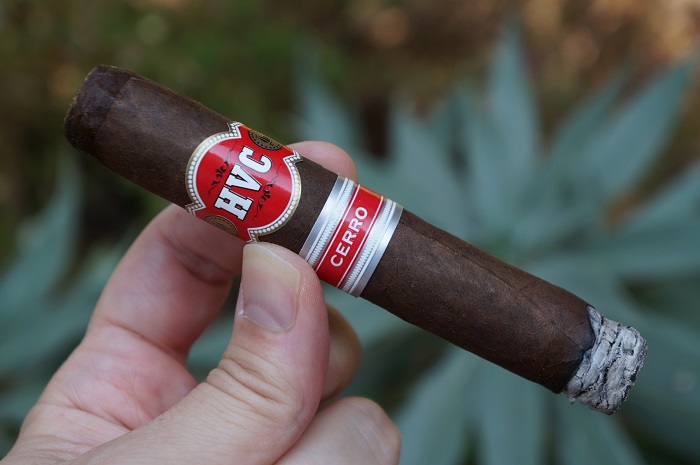 The first third opens up by delivering a nice medium-full strength and body profile. There is a nice bit of dry cocoa and earth, and with that I am picking up some sweet spices, toast, and espresso beans on top of that. It has nice bit of depth and is a nice maduro offering. I like how this Mexican wrapper is smoking because it’s not too sweet but spicier and a little bit dryer. It is still rich, just not over the top. The flavors are at that medium-full level as well and the construction is fantastic. I am getting an even burn line and and the end is a solid charcoal color ash that is holding on firmly. The draw is perfect and I am getting a nice bit of smoke produced. 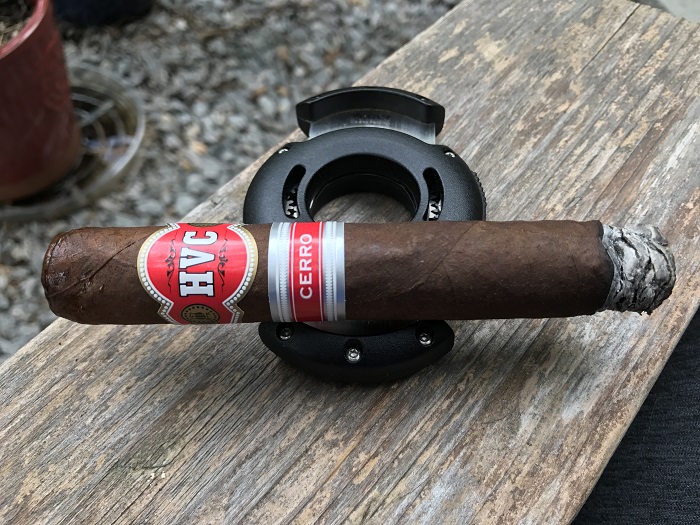 First third is mainly black pepper and dry wood driven. Not much sweetness comes out of the Mexican San Andres wrapper. Just a faintly generic sweet and creamy note. Retrohaling is also an intensified version of the same black pepper and dry wood with also a sharpness in minerality. The finish leaves the palate mineral heavy with slightly gritty dirt and cedar. Strength and body is medium within the first third. 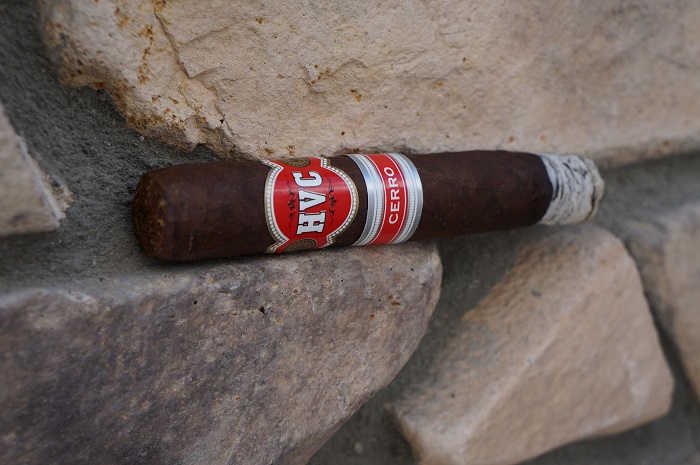 As the second third begins, the cocoa continues to fade back while the pepper is now gone and the wood is up front. The profile is back to being slightly dry. At three quarters of an inch in, the cocoa has completely left and a meaty note has joined in with the wood. At an inch and a quarter, some char joins the wood and pushes out the meaty note. As the third comes to a close, the charred wood continues on and the same note is present on the retrohale. The strength in this third moved up to slightly above medium. 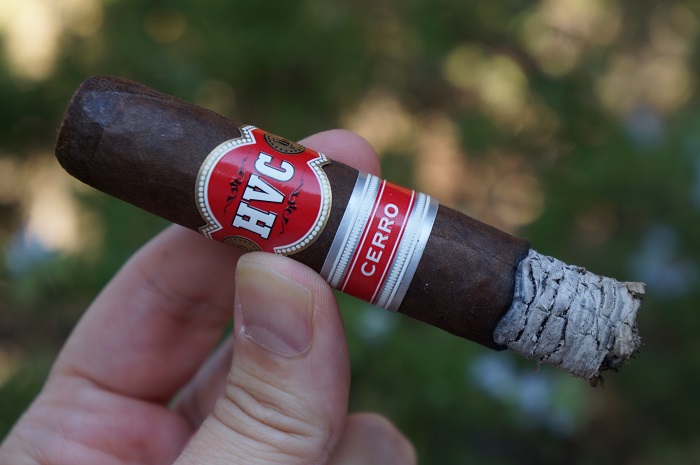 When I get into the second third of the cigar I find the cigar becomes a little bit more spicy and there is some smokiness with that. There are some emerging pepper notes and they are working with those sweet spices from the first third. The toast notes are still pairing with the espresso beans and barnyard qualities from before and it is a nice second third. There has been a little bit of transitioning from the first third and while it is not overly complex it is very enjoyable. It is a balanced maduro and it shows the qualities from the filler tobacco and the wrapper. I find maduros to be underwhelming a lot of the time for me but this is smoking well. The construction remains great and while the ash falls of easily it does produce a nice charcoal coloring. The draw remains cool and there is a nice bit of smoke produced with that. 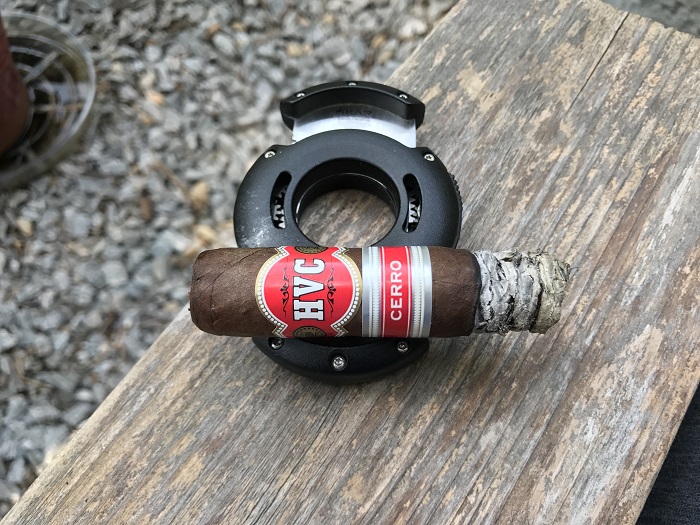 Second third transitions into so much earthiness in dry wood and minerality that the sweetness is essentially gone. Retrohaling brings an introduction of floral notes with the same deeper black pepper, sharp minerality and dry wood. The finish becomes a bit grittier with dirt and cedar. Strength and body remains medium. 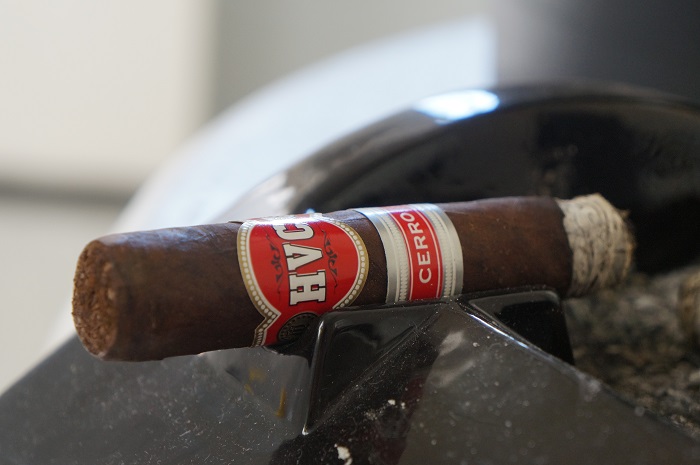 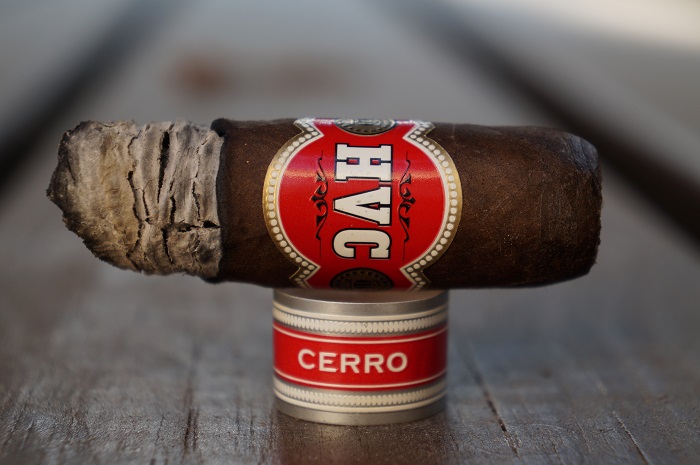 I am in the final third of the cigar now and finding the profile to return to the qualities present in the first third. It is not as complex as the first third, but it is close in a lot of categories. It is delivering that cocoa and earth profile with the sweet spices and espresso beans. It is not as full as it was in the first third and that toasty quality is gone, but it is enjoyable. The smokiness that was present in the second third really made the cigar pop but this finish is lacking that and is lacking that extra depth and complexity from the first third as well. I would say the cigar is smoking at a medium to medium-full level in all categories and with that is solid construction. The burn line remains even and that solid charcoal ash is still holding on well. 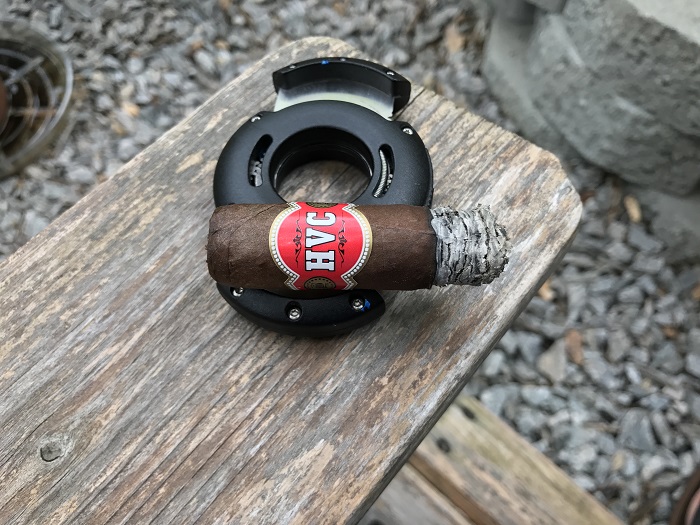 Last third is every bit the same as the second third except for the profile becoming slightly bitter. Still at the core of it, dominant earthiness in dry wood and minerality. Retrohaling gives floral notes, black pepper, sharp minerals and dry wood. The finish is still gritty earth and cedar. Strength nears medium-full and body still medium. 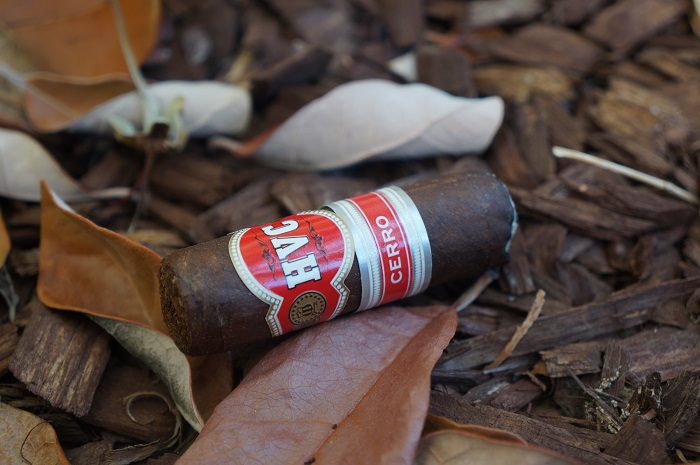 The burn was sharp the entire way and the ash held on in three quarter inch increments. 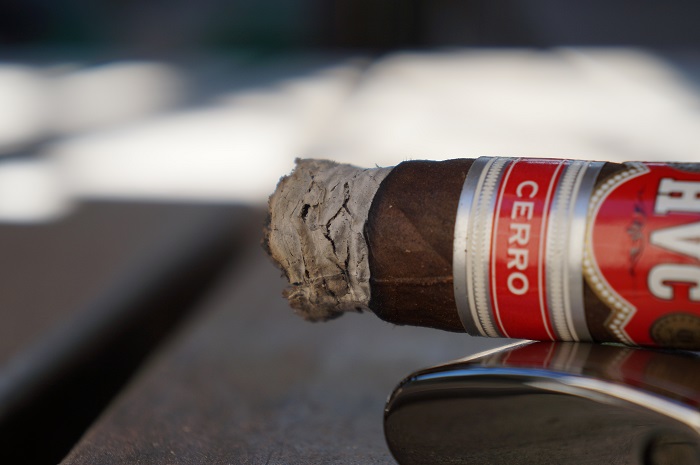 In terms of the burn and construction, the cigar was great. It was rolled well and produced an even burn line with a nice firm charcoal ash on the end. The ash held on firmly throughout the cigar and I never had any problem that required my attention. 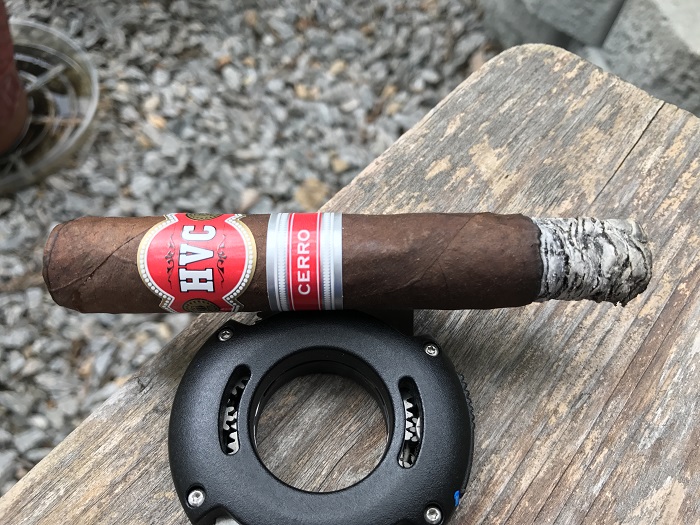 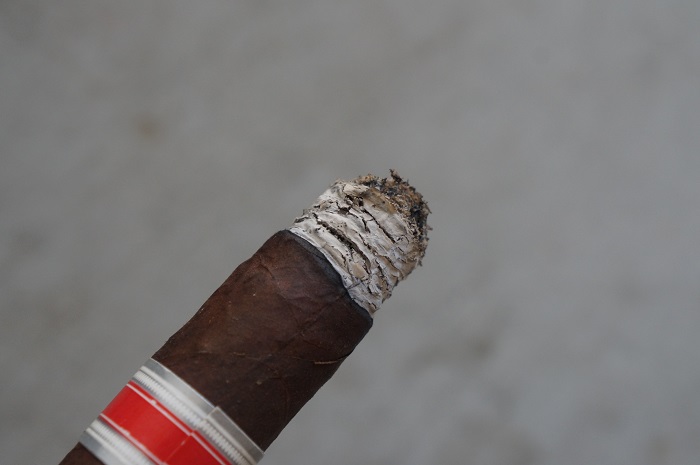 The first third started well with an abundance of cocoa along with wood and black pepper. Unfortunately, the cocoa and complexity didn’t continue on past the first third. The remainder of the cigar was pretty much wood dominant. In comparing this cigar to the original, I think I prefer the original. That isn’t to say this isn’t a good cigar, as it is, just not my preference between the two. Fans of HVC will most likely enjoy this cigar and would do well to try it. If you haven’t had an HVC, this would be a good one to introduce yourself to the brand.

Like the burn line, the draw was great from start to finish. It had the right level of resistance and it really helped with delivering a concentrated amount of smoke that increased the flavor profile. You couldn’t ask for more in terms of draw.

If the cigar had smoked like it did in the second third throughout, this cigar would be fantastic and one of the best maduro offerings from the factory since the Illusione Pactum. With that being said, the final third really let down the cigar. There was a great build up from the first to second third, but it quickly went downhill. I do think it is a good cigar, and a nice Mexican offering, just not what I would hope for and anything to really write home about. Mexican wrapper releases from Casa Fernandez are usually hit or miss with me, but this one seemed to fall right in the middle. It’s good but not great. I much prefer the Natural “Cerro” offering, and find that to be a better cigar all around.

The draw was slightly tight for my liking but it was still very good with no real issues.

This was overall an average tasting profile. The part that disappoints me most is the lack of sweetness and fruit notes that I often find in a good Mexican San Andres wrapper. That and the over abundance of earthiness was a bit of a let down. I’ll take HVC’s Aganorsa Corojo or Equador Habano forward blends over this.