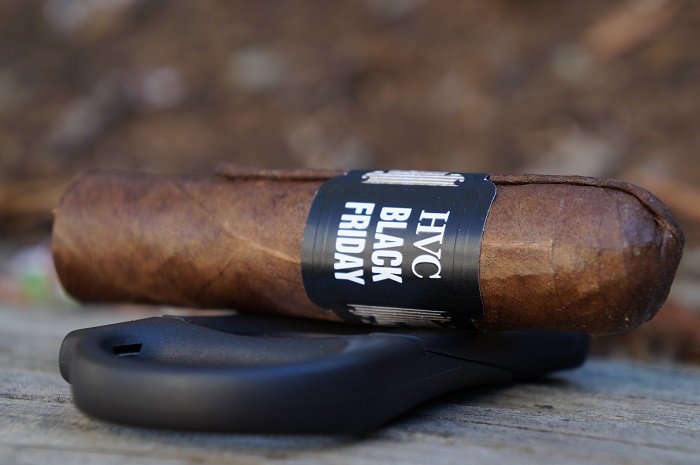 Aaron: The wrapper on the HVC Black Friday Firecracker is medium brown with some light marbling. There are some slightly raised veins present and the seams are easily visible as they are a bit raised. The head is finished off with a well applied set of caps and has a long fuse running down the cigar and under the band. The band is black, white and gold and designates the company and line name. The aroma from the wrapper is damp earth and wood while the foot brings a light mix of wood, tobacco sweetness and light spice. The pre-light draw brings a mix of black tea and cedar with a very subtle spiciness on my lips.
Seth: Petit in size, the HVC Black Friday Firecracker lacks any trait to really make it pop. The aroma on the foot is that of pipe tobacco, currants, raisins and earth, while the wrapper is giving off notes of cedar, leather and tobacco. A dark Natural coloring, the wrapper has a few veins here and there. It is firm throughout and fine in texture.
John: The HVC Black Friday Firecracker comes in cellophane, but lacks a sticker with either a UPC or cigar identification. There is a long length of tobacco coming off the cap styled to look like a fuse, and it is tucked under the band. Aromas from the cigar included very sweet cedar, the sweetness reminding me of raisins, and coffee creamer. There is a more muted raisin sweetness from the foot along with cedar.
Jiunn: The HVC Black Friday Firecracker is a looker. The wrapper is rich and oily with a uniformed Colorado maduro wrapper shade. The wick is just super cool. Veins are well pressed, seams tight, bunch and roll even and head well wrapped. Aromas from the wrapper give a mix of rich cedar and red pepper spice. Aromas from the foot give the same but with greater intensity. Cold draw reveals dusty cedar shavings, sweet nuttiness and red pepper spice. 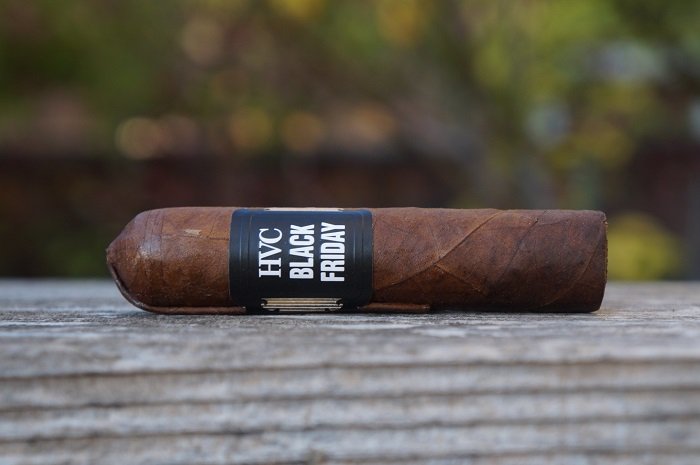 Aaron: The cigar begins with a stout mix of wood and baking spice. At a quarter inch in, the wood gains a light toast, the baking spice has transitioned to a full black pepper and some cream joins the profile. The retrohale is musty wood with light black pepper. At three quarters of an inch in, the cream has morphed into mustiness as the black pepper has lightened a bit. The strength in this third was slightly above medium.
Seth: The first third opens by delivering a lot of black pepper notes. This is the most peppery TABSA blend I have had. There are some coffee bean and dry earth notes present with that, and it has some strong tobacco qualities. In terms of strength and body, solid full. Shame the ash fell off before a picture.
John: My review experience began with mild baking spices and dry cedar to finish the draw. A toasted peanut develops along with black pepper on the retrohale and through the finish. Dark chocolate joins the retrohale a few puffs later. Roughly by the ten minute mark, bold leather joins the finish. Not long after, a syrupy sweetness comes through. Five minutes after that, a sugary breakfast cereal develops. A substantial number of flavor transitions in a very short period of time. The strength of the cigar has snuck up on me and is really starting to hit home already. Some mild bitterness comes through the post draw as the first third closes out.
Jiunn: This is a powerhouse of a cigar. With just a few draws in, it is full strength (medium bodied). Deep and dark flavors centered around black coffee, slick and oily red pepper spice, cedar and just enough sweet roasted nuttiness to not make it just about spice and earth. Retrohaling gives nostril stinging red pepper spice that lingers long after the smoke dissipates. The finish is a mixture of cedar and lasting red pepper spice. 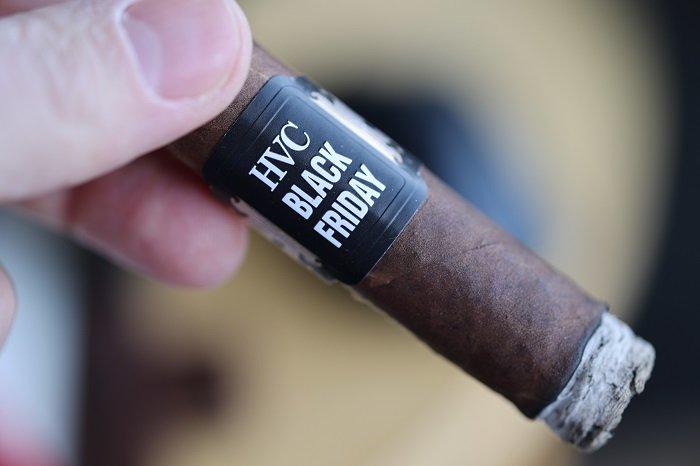 Aaron: As the second third begins, some earth joins the profile. At a quarter inch in, the musty and toasted wood is even with the dry earth while the black pepper is slightly behind. The retrohale is now musty and toasted wood with dry earth. As the third comes to a close, the musty and toasted wood is even with the dry earth while the black pepper has dropped out. The strength in this third remained at slightly above medium.
Seth: The second third delivered a slightly subtle version of the first third. I was still picking up those black pepper notes, but they were not as pronounced in the first third. With that are some coffee bean and dry earth notes. Like before, full in strength and body.
John: A tannic sweetness carries the profile into the second third. The finish is a syrupy sweetness, cedar and a punch of astringency. There’s some fruity sweetness that is pushed down by the other flavors. As the second third establishes itself, a tropical fruit anchors the center of the profile. As the second third progresses, a post draw dark toasted element mixes with the tropical fruit, eventually overwhelming it.
Jiunn: The second third maintains full strength (medium bodied). Deep and dark flavors centered around black coffee, slick and oily red pepper spice, cedar and just enough sweet roasted nuttiness to not make it just about spice and earth. Retrohaling gives nostril stinging red pepper spice that lingers long after the smoke dissipates. The finish is a mixture of cedar and lasting red pepper spice. 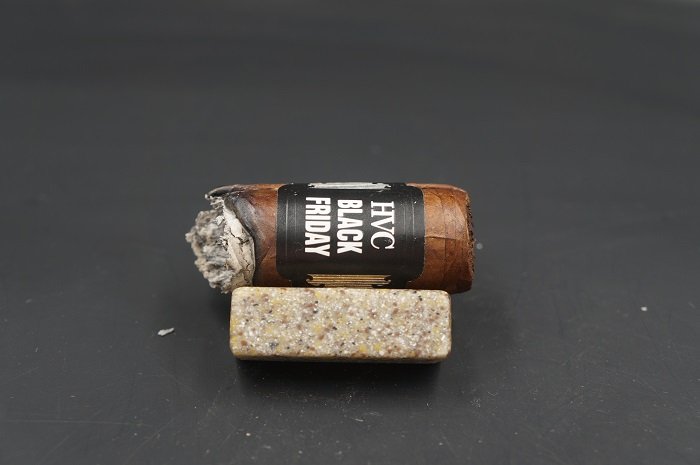 Aaron: The final third continues on with the musty and toasted wood and dry earth. At a quarter inch in, the toast level has increased. The retrohale remains musty and toasted wood with dry earth. The cigar wraps up with the musty and heavily toasted wood and dry earth. The strength in this third bumped up to medium-full.
Seth: The final third shows an increase in the black pepper notes, but the overall profile is right in line with that of the second third. Black pepper, dry earth and coffee bean notes. Like before, full in strength and body.
John: A citrus sweetness with toasted accents to begin the last third, with tannins present through the post draw. That toasted flavor component overtakes the profile to become the primary element once the last third has settled in.
Jiunn: The final third continues at full strength (medium bodied). Deep and dark flavors centered around black coffee, slick and oily red pepper spice, cedar and just enough sweet roasted nuttiness to not make it just about spice and earth. Retrohaling gives nostril stinging red pepper spice that lingers long after the smoke dissipates. The finish is a mixture of cedar and lasting red pepper spice. 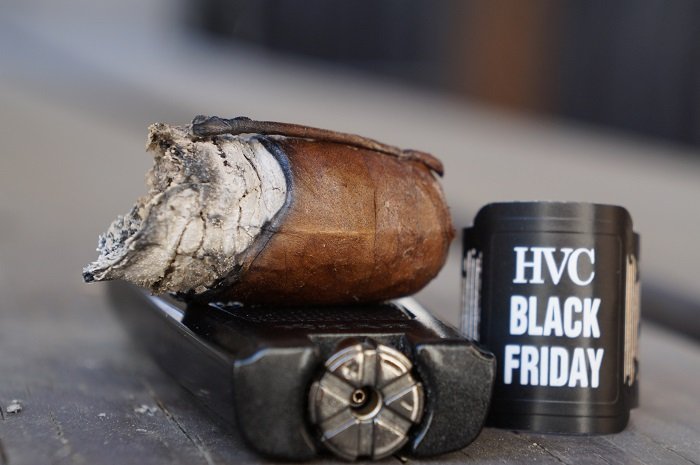 Aaron: The burn was a bit wavy throughout and required one touch-up and one re-light.
Seth: At times I needed to touch-up the cigar. That is a pain when the cigar is only 3.5”.
John: The burn was good through the review experience, starting out mostly straight in the first third. The burn was uneven at times in the second third, with the ash resisting attempts to knock it off. Eventually, that uneven burn required a touch-up. The burn slowed down going into the last third, requiring a touch-up to keep it going before it went out.
Jiunn: Terrible burn performance. I lost count how many times I had to either re-light or touch-up the cigar. 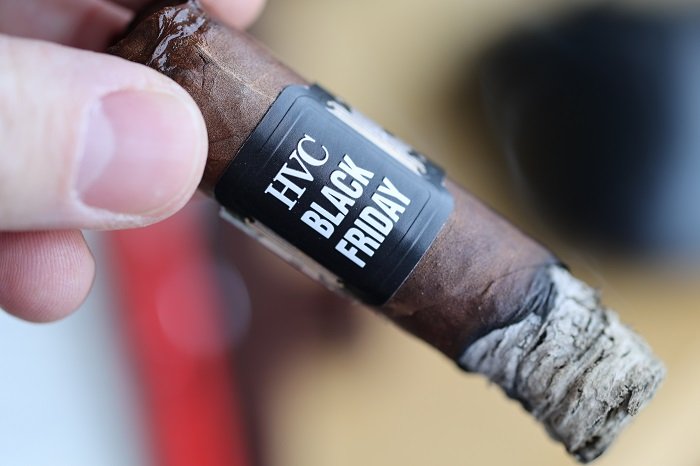 Aaron: The draw was slightly tighter than I prefer, but didn’t seem to cause any issues with the smoking experience.
Seth: Very nice draw throughout.
John: The draw had a negligible amount of resistance to it, roughly 1/2 to 1 notch towards the resistant spectrum. That put the draw well in the ideal zone for an amazing draw.
Jiunn: Draw was the exact opposite of the burn. It had a perfect draw.

Aaron: The flavor profile was pretty average throughout as it started with wood and baking spice and quickly settled into toasted wood, black pepper and mustiness. Some dry earth joined in a bit later. I never smoked the Black Friday blend previously, so I can’t say if this is an amped up version to the original, but this cigar does carry a bit of strength to it. I’m not sure I’d return to the HVC Black Friday Firecracker, but it does smoke slow, so even with the short size, you’ll get some smoking time out f it.
Seth: The HVC Black Friday Firecracker delivered those Firecracker qualities. In that case it was a success. But I thought the blend lacked complexity and depth. I love the size, and the flavor profile is to my liking for certain times of the day and seasons, but overall, the cigar is lacking qualities to make it a good blend. Would pick up a handful of these to enjoy for certain summer days. Great price on the cigar though. I love the idea of just releasing really good petit robusto offerings in 50 count boxes that are priced between $5.00 and $7.00 a cigar.
John: The HVC Black Friday Firecracker packed a significant amount of flavor complexity, given the small size that it had to work with. It was also easily the strongest HVC that I’ve ever smoked, and even though I’m very used to smoking cigars at the full end of the spectrum, the HVC hit me solidly with strength at a few points. I would happily smoke another one of these, and I’d be interested in trying a milder version of this in a robusto vitola. Total smoking time was 1 hour and 5 minutes.
Jiunn: Like the name suggests, the HVC Black Friday Firecracker was indeed a powerhouse of a cigar. I loved the rich and dark tones of the cigar. Spice and strength so strong, it reminded me of the spiciest hot sauces (think Halal Guys red pepper sauce). You know, the kind of food so spicy that your butthole hurts from taking a dump. The only true let down was the wick being a pure dud, causing so many burn issues. But, may I have another sir?