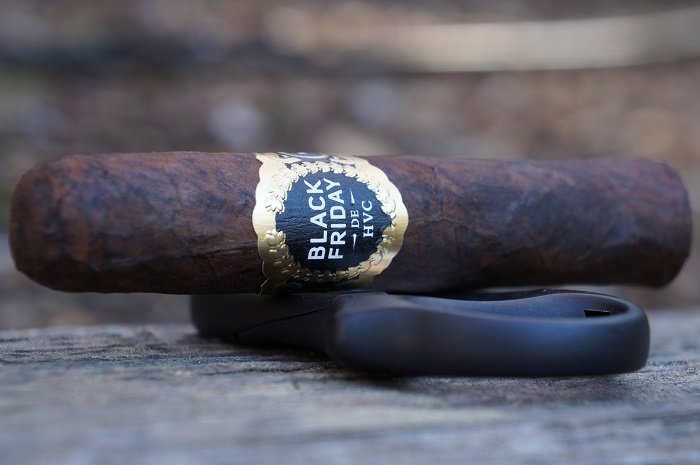 Aaron: The HVC Black Friday 2021 has a wrapper that is a marbled dark brown and has some thick but lightly raised veins present. The cigar seems to have a bit of an outward taper going from the head to the foot. The seams are slightly raised, and the caps have some raised edges. The band is the traditional black and gold design for this line. The aroma from the wrapper is a light mix of dark earth and cocoa powder while the foot brings wood, dark earth and light anise. The pre-light draw brings cedar and a light floral note.
Seth: Finished with a very dark wrapper, dark maduro, the HVC Black Friday 2021 is firm and stout in hand. Near Oscuro coloring, like an oily espresso bean, the cigar has an aroma of rich earth, manure, tobacco, damp tobacco and spices.
John: The HVC Black Friday 2021 comes in cellophane and does not have a UPC sticker. The cigar is single banded, and has a dark brown, slightly mottled wrapper. Aromas off the cigar included aged wood, mild hay and tobacco. From the foot, I was picking up on sweet stone fruit and dark chocolate.
Jiunn: The HVC Black Friday 2021 has a spotty Colorado Maduro wrapper shade. Veins are well pressed, seams tight, bunch and roll even and head well wrapped. Aromas from the wrapper give sharp cedar and white pepper spice. Aromas from the foot tell the same as the wrapper aromas but with greater intensity. Cold draw tell primarily cedar and nuts. 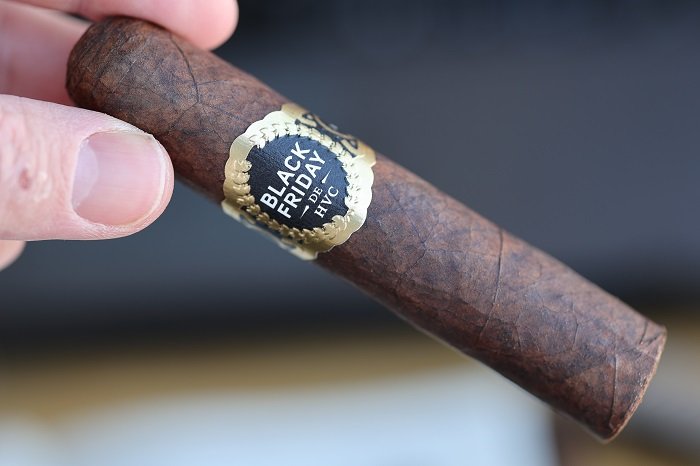 Aaron: The cigar begins with toasted oak and a sharp black pepper. After a few draws, the black pepper becomes less sharp and some dark earth joins the profile. At a quarter inch in, some cocoa powder joins in. At a half inch in, the black pepper has mellowed a bit more and a light mustiness has joined the profile. The retrohale is musty, toasted oak and mild black pepper. As the third comes to a close, the musty, toasted oak is up front, with black pepper and dark earth a bit behind and some light cocoa powder in the background. The strength in this third was slightly above medium.
Seth: The first third starts out with a ton of leather and earth notes. I am picking up charred cedar qualities as well, and the finish has a bit of pepper and espresso beans. Full in body, I would classify the strength as medium-full.
John: My first few puffs are flavors of chewy earth, minerality and mild leather combining with earth into the post draw. Mild pepper starts to develop on the post draw after just a few puffs. That pepper rapidly increases in intensity to medium strength. As the first third settles in, the pepper has reached medium-full strength on the retrohale, offset by some tobacco sweetness. Post draw pepper starts to come down in strength as creaminess joins the retrohale. Not long after, baking spices have joined the retrohale at medium strength. By the 20 minute mark, sweetness is building in the center of the profile. By the halfway point, earth and minerality have joined the center of the profile. Leather moves into the post draw at medium strength. In the bottom half, sweetness moves to the front of the profile.
Jiunn: The first third creates a medium-full body and strength profile. Flavors consist of medium bodied sweet milk, rough burnt cedar and a hint of gaminess. Retrohaling gives sharp white pepper spice. The finish prolongs the burnt cedar note. 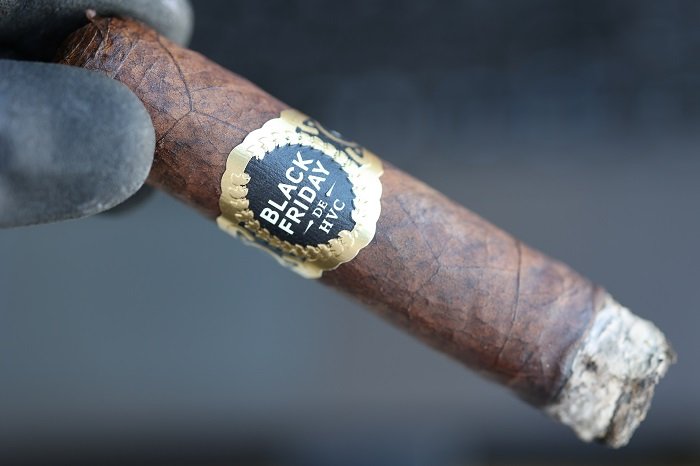 Aaron: As the second third begins, the black pepper mellows a bit more and becomes a bit dull. At a quarter inch in, the cocoa powder has departed. The retrohale is now musty, toasted oak and dark earth. At a half inch in, the black pepper departs. As the third comes to a close, the profile is musty, toasted oak with dark earth right behind. The strength remained at slightly above medium.
Seth: The second third delivers a flavor profile of earth and leather notes. There are pepper and charred cedar qualities as well, and the finish has some espresso beans, cocoa and black pepper. Full in body, medium-full in strength.
John: Sweet earth and baking spices take the cigar into the second third as earth and minerality finish with loam accenting the earth in the post draw. That earth starts building to reach medium-full intensity, and becomes the dominant post draw flavor. As the second third progresses, the earth takes on some bitterness as an accent.
Jiunn: The second third ramps up the burnt cedar note to the point where the other enjoyable flavors are almost entirely masked. The profile also picks up a general bitterness that is long and lingering on the finish. Strength and body remains medium plus. 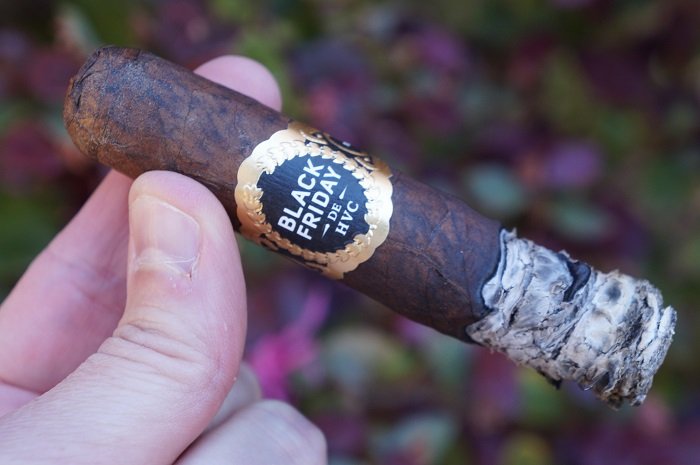 Aaron: As the final third begins, the toast level picks up a bit. The retrohale remains musty, toasted oak and dark earth. At three quarters of an inch in, the cigar warms up and a vegetal note joins the profile. As the cigar comes to a close, the profile is musty, toasted oak up front with dark earth and the vegetal note right behind. The strength bumped up to medium-full.
Seth: The final third delivers a flavor profile of charred cedar, harsh earth, leather, burnt meat, espresso beans and black pepper. Very full and in your face. Full strength and body.
John: Loamy earth carries the cigar into the last third, as earth also takes up the center. There is no further development through the last third.
Jiunn: The final third is the same as the second third. Bitter, sharp, rough around the edges with burnt cedar. It’s pretty difficult to find any redeeming qualities at this point. Strength and body finishes the same medium plus. 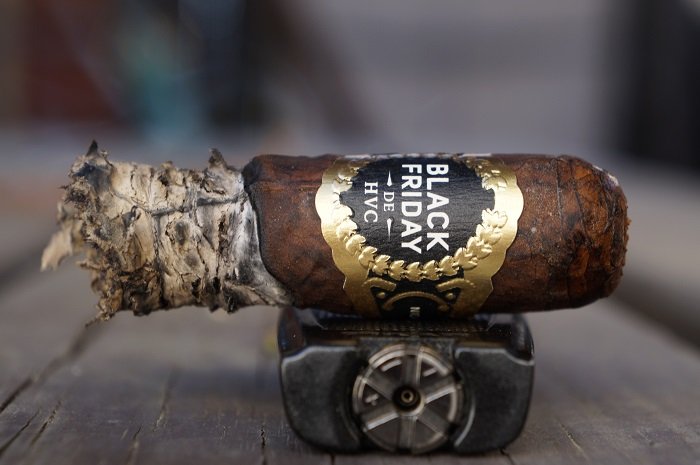 Aaron: The burn was a bit wavy throughout, but never needed any attention. The ash held on in inch and three quarter increments.
Seth: Burn was good from start to finish. A little wavy.
John: The burn starts out burning quite slow; so much so that I was concerned it was going to go out. The cigar does go out at the halfway point, requiring a re-light.
Jiunn: Burn performance had a couple issues. A couple quick touch-ups and a complete re-light within the second third. These items however did not effect the overall flavor experience. 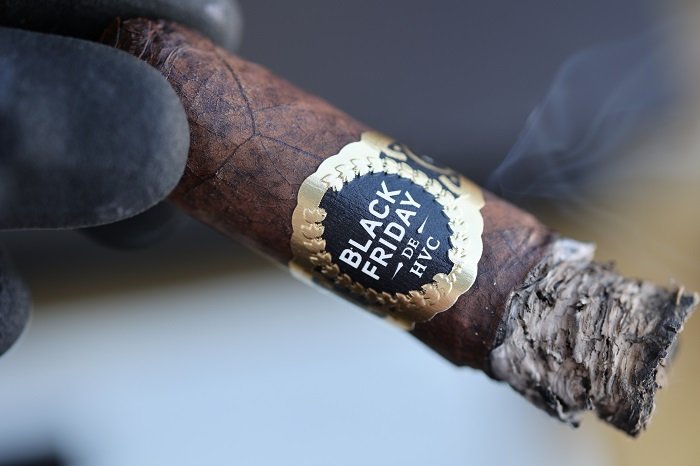 Aaron: The cigar began with toasted oak and a sharp black pepper. The pepper settled down fairly quickly and some dark earth joined in. Some cocoa powder and mustiness joined a bit later. The second third saw the cocoa powder and black pepper drop out. The final third saw the toast level pick up and a vegetal note join in. The HVC Black Friday 2021 started well, with a nice combination of flavors, but the second third dropped down as some components left the profile and maintained this level the rest of the way. I really liked how the cigar started, but it just couldn’t maintain the mix of flavors. The cigar also finished out with a bit of a strength punch. The price point is attractive, but it just isn’t a cigar that I’d see myself coming back to that often.
Seth: Disappointing overall is the best way to describe the HVC Black Friday 2021. I was hoping for more elegance and complexities, but the cigar turned out to be an in-your-face offering. Lots of strong earth notes that were paired with charred cedar, espresso beans and leather. Burn was not great throughout, but at the same time not a problem. I guess the fact that this was a petit robusto saved the cigar, because if it was a toro, I would have been more disappointed. Compact cigar with compact and robust flavors. Compact flavors not to my liking.
John: The HVC Black Friday 2021 started out with a complex medley of flavors that ranged from earth to pepper to creaminess and baking spices. By the second third, it was largely earth driven, and was entirely linear earth in the last third. The draw had some resistance to it, and the burn required a re-light. Unfortunately, this ranks as my least favorite HVC Black Friday to date, but I will look forward to reviewing the 2022 release. Total smoking time was 1 hour and 54 minutes.
Jiunn: This HVC Black Friday 2021 was a disappointment. The harshness and bitterness for the last two thirds destroyed the enjoyment. This is exactly the type of Connecticut Broadleaf I dislike, focusing on scorched earthiness without giving enough of the denser, chocolate, sweet notes that a well blended broadleaf should give. No doubt a pass for me.