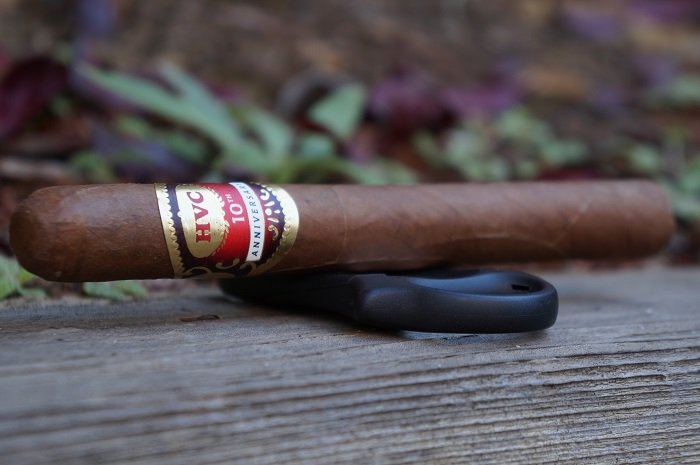 Aaron: The wrapper on the HVC 10th Anniversary is light brown and has a few decently raised veins that carry a lighter color to them. The seams are a bit raised and the caps also have raised edges to them. The band is gold, various shades of red and white and denotes the company and line names. The aroma from the wrapper is wood and hay while the foot brings slightly sweet cedar with a mild spiciness. The pre-light draw brings sweet and musty aged cedar along with a mild spiciness on my lips.
Seth: Dark Natural to Colorado in coloring, the HVC 10th Anniversary is oily with some veins present throughout. Veins are medium to large, and they are significantly darker than the leaf portion. Nice triple cap, firm throughout. Aromas of rich earth, leather, cocoa and raisins.
John: The HVC 10th Anniversary is cellophaned, and does not have a UPC sticker. The cigar is single banded, with a red on gold band that I think highlights the cigar well, without the need of a secondary band. Aromas from the wrapper included sweet bread and faint wood. From the foot, most of the aromas were mild, with sweet raisin and hay being the two that jumped out at me.
Jiunn: The HVC 10th Anniversary has a Colorado Claro to Colorado Maduro wrapper shade. Veins are well pressed, seams tight, bunch and roll even and head well wrapped. Aromas from the wrapper tell barnyard, bread and cedar. Aromas from the foot give white pepper, nuts and cedar. Cold draw gives hay, cedar and bread. 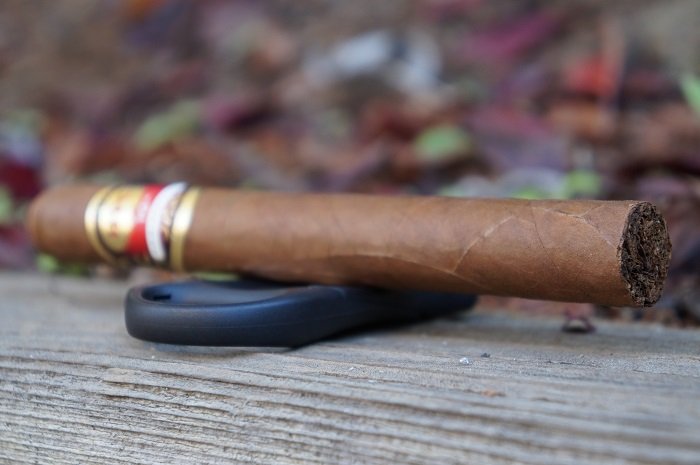 Aaron: The cigar begins with toasted cedar and sharp black pepper. At a half inch in, the pepper is no longer sharp, but still bold. The retrohale is slightly musty, toasted cedar with a mid-level black pepper zing. At an inch and a half in, the black pepper has a slight lead over the toasted cedar. As the third wraps up, a light mustiness joins the profile. The strength was medium-full.
Seth: The first third opens with leather, earth and coffee notes. I am picking up some faded nut qualities, and there are some wood qualities present on the finish. Medium in strength and body. Balanced and pleasant.
John: The initial flavor impressions for me were of sweet, medium strength baking spices, wood and a finish of baking spices and delayed wood. A viscous cocoa comes through on the post draw to sit on my palate. As the first third settled in, bread moved into the center of the profile. The baking spices developed a long, lingering finish between draws. As it progressed, cocoa pushed into the main profile and harmonized well with the baking spices. By around the 25 minute mark, the baking spice intensity has fallen to light-plus, as bread and cocoa are leading the profile. By the halfway mark, wood moves up to medium strength, taking on some drying characteristics.
Jiunn: The first third gives familiar Aganorsa Corojo 99 flavors. Cedar, baking spices, ginger snap cookies, dinner roll bread and minerals. But the flavors are not balanced and lean towards being spikey in baking spices and cedar. This pair of flavors slightly irritates my throat. Retrohaling gives a pop of black pepper and baking spices alike. The finish is long and lingering with cedar as the main driver. Strength is medium-full, body is medium. 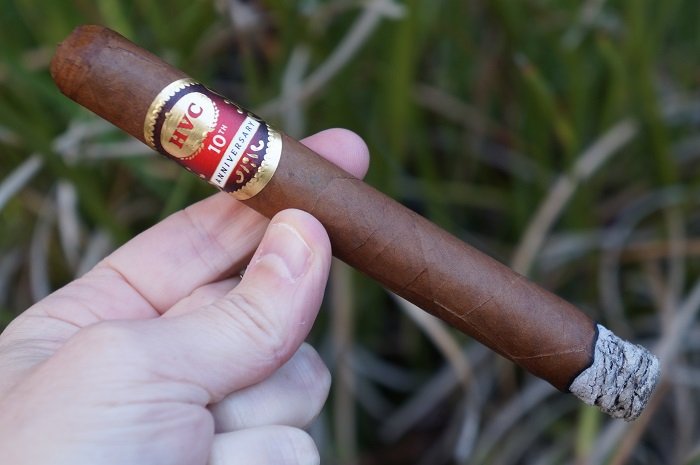 Aaron: As the second third begins, the black pepper mellows slightly. At a quarter inch in, the mustiness picks up and the musty, toasted cedar is now slightly ahead of the black pepper. At an inch in, the black pepper decreases a bit more and the overall profile is now slightly dry. The retrohale is slightly musty, toasted cedar with a delayed push of black pepper. At an inch and a half in, the toast level becomes pretty heavy. The third wraps up with musty, heavily toasted cedar with black pepper a bit behind. The strength remained at medium-full.
Seth: The second third delivers a flavor profile that is a continuation of the first third. I am picking up leather and nut qualities that are paired with some earth and coffee. Bits of earth present as well on the finish. Medium in strength and body.
John: The second third started as sweet bread combined with baking spices, giving way to a wood finish. Cocoa returns to the middle of the profile at a subdued light-plus strength as it settled in. Post draw wood moved up to medium strength as it continued. By the halfway mark, the bread and wood equalize at medium strength. Some dryness comes into the post draw to accentuate the wood present. In the bottom half, medium strength earth moves into the center of the profile. The baking spices moved back up to medium strength on the retrohale here.
Jiunn: The second third picks up leather and the associated leathery tannins. The baking spices and cedar have tapered back, so at this point it’s leather first, and cedar, baking spices, ginger snap cookies, bread and minerals as second tier flavors. Strength and body is still medium-full and medium, respectively. 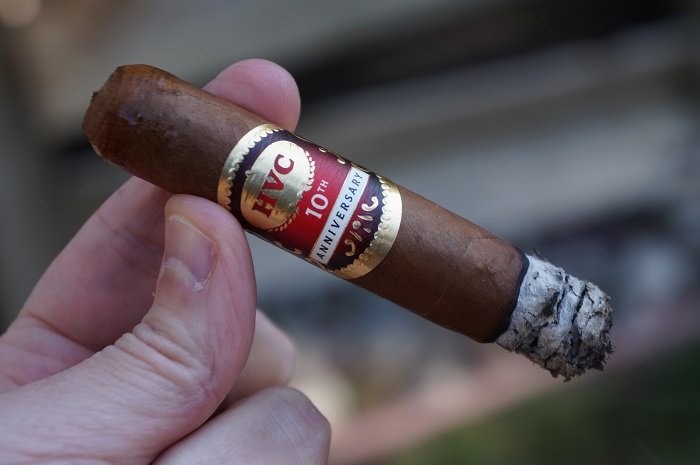 Aaron: The final third continues where the second left off. At three quarters of an inch in, a light vegetal/floral combination joins the profile. The retrohale is now musty, toasted cedar with mild black pepper. The cigar wraps up with musty, heavily toasted cedar with light amounts of black pepper and a vegetal/floral combination in the background. The strength dropped down to slightly above medium.
Seth: The final third was right in line with the second and first third. I was picking up great leather, dry earth, nut and coffee qualities. Very little spice and no pepper. No sweetness either. Very balanced. Medium in strength and body.
John: The last third started things out wood forward, with trailing baking spices into the post draw. Dryness is still present on the post draw, as earth moves back into the center of the profile at medium strength. As it progressed, earth was driving the profile, and by the halfway mark had taken over the post draw as well. In the bottom half, a mild bitterness is present at the end of each draw.
Jiunn: The final third shows no changes from the second third. Still medium-full strength, medium body, with flavors of leather, baking spices, cedar, ginger snap cookies, bread and minerals. 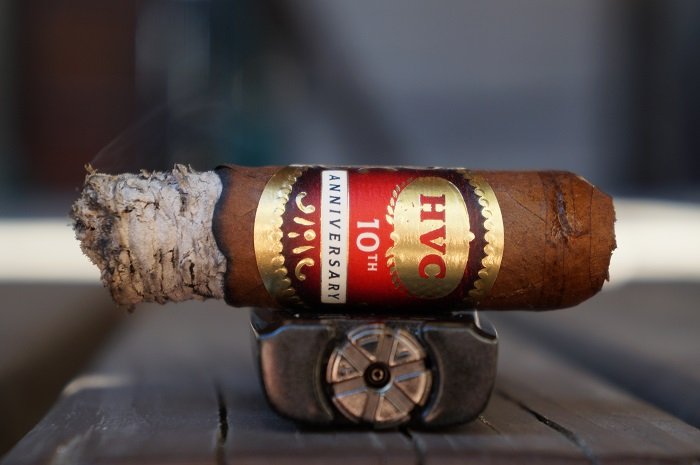 Aaron: The burn line was slightly wavy throughout, but never required any attention. The ash held on in inch and a quarter increments.
Seth: Very good burn throughout.
John: The burn was fairly straight to start, with unevenness developing by the halfway point of the first third, requiring a touch-up. It was uneven again in the second third, but self corrected. The cigar was uneven again in the last third, requiring another touch-up.
Jiunn: No issues with the burn. Even, solid ashes, good smoke production and cool burning temperature. 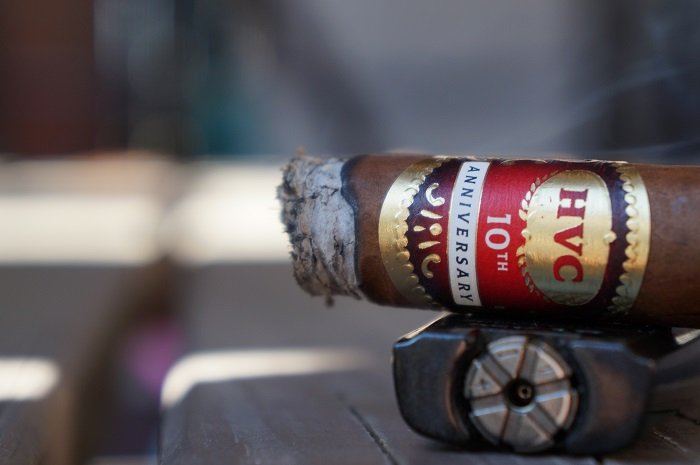 Aaron: The draw was slightly tighter than I prefer, but didn’t cause any issues with the smoking experience.
Seth: Perfect draw from start to finish.
John: The draw had at most a 1/2 notch towards the resistant spectrum putting it in the ideal range for draw.
Jiunn: No issues with the draw either. The ideal balance between air flow and resistance.

Aaron: The cigar began with toasted cedar and sharp black pepper with the pepper slightly mellowing fairly quickly. Some mustiness joined in as it transitioned to the second third and the black pepper continued to lighten. The final third saw a light vegetal/floral combination join in. The HVC 10th Anniversary was very pepper forward through the first half and really only had the musty, toasted cedar to try to balance with. A very basic combination that has me scratching my head for an anniversary release. The price point is quite high and I can’t really see myself coming back to this cigar.
Seth: This HVC 10th Anniversary was an enjoyable cigar from HVC, but the price was too high for the flavor profile delivered. This smoked more at a range just below $10, in my opinion. With that, there are some better blends delivered for that price. I do like this as an AGANORSA blend though. Especially a recent one. Hopefully this is a trend that TABSA is back on track with the blends being delivered.
John: Once again, HVC puts out a good cigar with the HVC 10th Anniversary that delivers a range of flavors and nuance keeping me engaged for the majority of the review experience. I will add this to the pile of blends Reinier Lorenzo has put out that I would happy to return to. The draw was perfect, while the burn required two touch-up interventions. Total smoking time was 2 hours and 29 minutes.
Jiunn: First of all, it’s so great to see HVC live to their 10th Anniversary. From seeing Reinier go from a small kiosk at the trade show to a full on decorated booth, I’m honestly happy for the HVC team. In terms of the actual HVC 10th Anniversary cigar, it’s nothing special and quite average. It has very familiar Aganorsa Corojo 99 flavors that I typically love, but this errors on the unbalanced side of things. I’d say stick to the regular production of HVC over this, and you’ll end up thanking your wallet and your taste buds.